Where Does Off-Premises Go from Here?

Brands are going digital to answer the call for dining outside the four walls.
Restaurant Operations | October 2019 | Mary Avant

Kitchen United plans to grow to 25 facilities by the end of 2020.

When it comes to the state of restaurant traffic, there’s both good news and bad. The bad is that, according to the June 2019 “Restaurant Industry Snapshot” from TDn2K—an insights provider for the restaurant industry—same-store traffic growth for the second quarter was down nearly 3 percent, driven largely by a drop in in-store traffic. The good news? Off-premises dining more than makes up for that, and continues to drive incremental sales for concepts across every category.

After recovering from the struggle that was the Great Recession—during which the restaurant industry faced a two-and-a-half-year downturn—the landscape changed entirely, replacing budget-conscious consumers with those who craved choice and convenience above all else. No longer were diners satisfied with the standard fast-food drive thru, ordering items for pickup at fast casuals, or getting delivery from their local pizza joint. Thanks to increasingly sophisticated technology and the demand for all things digital, restaurants have been experiencing a revolution of sorts, particularly when it comes to off-premises dining. In fact, a 2016 study from consumer data provider Statista showed that 26 percent of Americans ordered takeout or delivery at least once a week, while a similar 2018 study showed that 31 percent of Americans ordered delivery “at least somewhat often”—and a vast majority of them used mobile apps or online ordering platforms to do so.

“The needs of our customers are changing. People are increasingly on the go, they’re increasingly active, and they expect access and convenience to the food and brands they love,” says Nicole West, vice president of digital strategy and product development at Chipotle. “If we can meet them wherever they may be and make that a convenient, frictionless process, then we win.”

Delivery is undoubtedly the area that’s seen—and will continue to see—the biggest strides in off-premises business. Data from L.E.K. Consulting projected that total delivery sales will grow at more than three times the rate of on-premises sales over the next five years. Though those in the pizza category have been using delivery since the 1960s, brands everywhere are now getting on board thanks to third-party providers. Wendy’s partnership with DoorDash, McDonald’s McDelivery via Uber Eats, Taco Bell’s association with Grubhub—the list goes on and on. And that’s without even mentioning aggregated delivery sites like Seamless. Over the last year alone, TDn2K reports that sales on third-party delivery apps have grown by a whopping 76 percent. 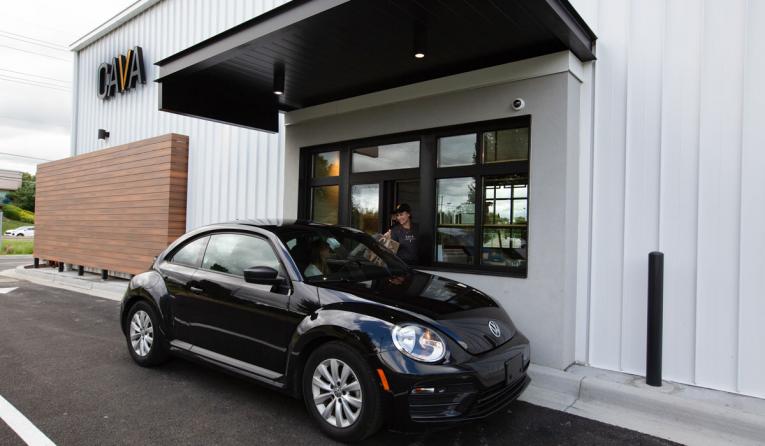 Thanks in part to its partnership with DoorDash—along with its mobile and website ordering capabilities—digital sales at Chipotle grew 99 percent year-over-year in 2019’s Q2, accounting for 18.2 percent of all sales in the quarter. To make its away-from-restaurant dining more seamless and quicker than ever, the company has rolled out a number of innovations over the past year and a half—the first of which, pick-up shelves, use very little technology at all. Customers simply order via the Chipotle app or website, come into the store, and grab the bag labeled with their name off the shelf. Not only does it enhance the pickup experience for customers, but it also speeds up delivery time for third-party couriers.

“With the installation of the shelves, we’ve made those last 10 feet really frictionless,” West says.

Firehouse Subs unveiled a similar system-wide program last year in an attempt to capture the business of on-the-go guests. “We’re not fast food, so our whole process for making a sub is more artisan,” CEO Don Fox says, adding that each sandwich takes about three minutes to create. “Guests loved the food, but if they were pressed for time, we may not fit their criteria on a given day.” But thanks to the Rapid Rescue To Go program, customers can place their order online and pick it up from a rack by the door without the need to wait in line for their items to be made.

In addition to pick-up shelves, many fast-casual concepts faced with soaring digital-order volumes are also choosing to explore an avenue in which fast-food brands have long excelled: drive thrus. Earlier this year, Chipotle began testing “Chipotlanes” in select stores, where guests can pick up app or website orders without leaving the comfort of their car. Similarly, Mediterranean fast casual CAVA launched its first digital drive thru—called the Pickup By Car model—in April, with plans to roll it out in five locations by the end of the year. “We’re presenting the line experience digitally and still giving guests that pleasant experience they have when they’re in a CAVA restaurant, but bringing it to a more on-the-go format,” says CAVA spokeswoman Chelsea Grieco. (More on fast casuals turning to drive thru)

Another off-premises area undergoing digital transformation? Catering. Thanks to companies like ezCater—an online catering marketplace that follows the format of delivery sites like Grubhub and Seamless—brands are finding it easier than ever to meet the demand for catering (or even to offer it in the first place).

“[Data shows] that catering revenues are growing 50 percent faster than the growth rate of the overall restaurant industry,” says ezCater director of marketing David Meiselman. Because catering often comes with a larger average order size, he says, it naturally provides a higher profit margin for brands. “When you have incremental revenue in catering, it’s an even bigger boost to your bottom line because those orders tend to be more profitable dollar for dollar than smaller consumer orders.” 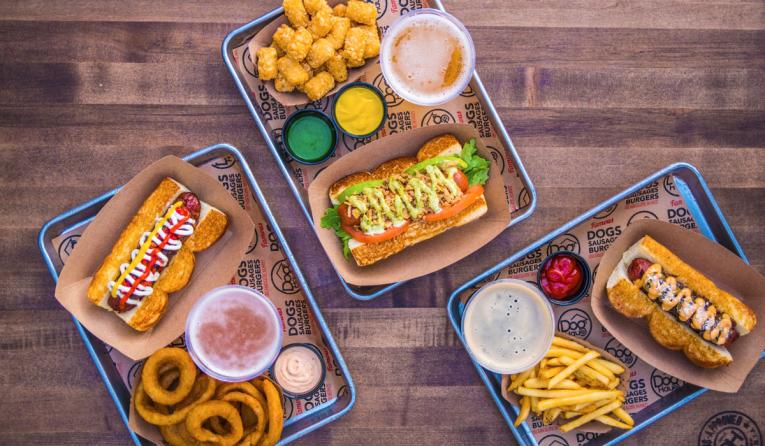 Not only does ezCater’s online ordering platform give consumers access to more than 63,000 caterers and restaurants across the U.S., but it also helps restaurant partners digitally reach consumers they may have had trouble accessing before. “The digital revolution in catering is helping restaurants grow their business faster, and it’s helping them reach more people with their food and experience,” Meiselman says. “Many restaurants refer to catering as ‘paid sampling.’ In other words, they’re getting paid to deliver food to people that might not be consuming their food otherwise.”

The company also offers programs like ezOrdering—which enables restaurants to take catering-specific orders via their own website—as well as ezDispatch, a Postmates-like platform that connects businesses to local catering-delivery partners. “One of the things that constrains your capacity of growing your catering business is that flexibility to deliver,” Meiselman says. “You might have the kitchen capacity to take those orders, but you don’t necessarily have the delivery capacity.”

Although many restaurants are more than happy to welcome the incremental business that delivery, catering, and other types of off-premises channels provide, their ability to meet the rapidly growing demand for it has been the root cause for much of the recent technological transformation. This demand is just one of the many reasons that Chipotle has added a “digital make line”—a back-of-house line where all digital orders are received and prepared—in every unit.

Each secondary line has its own set of staff, along with a custom digital display system that gives visual cues as to which ingredients go in each item and which items go in each bag. “With the digital make lines, we’ve eliminated any impact on our customers and allowed our crew members to be really focused,” West says, adding that the display system also improves order accuracy. “So our customers are receiving exactly what they ordered, making their experience exactly what they were hoping it would be.” 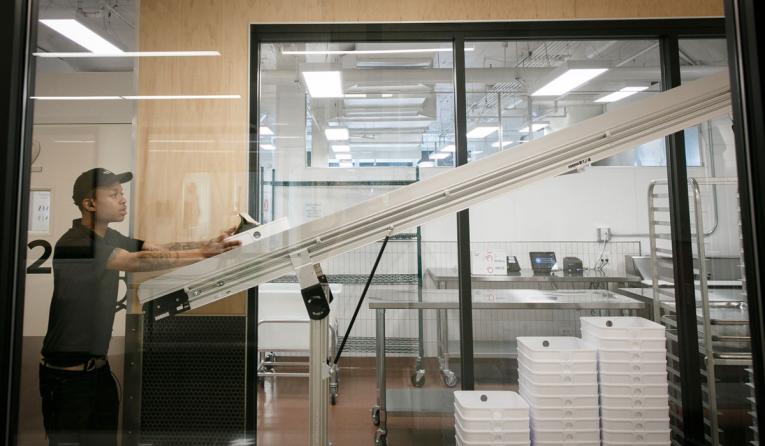 Are ghost kitchens the answer?

Ghost kitchens—also known as virtual kitchens, cloud kitchens, or delivery-only kitchens—are yet another way brands are keeping up with the boom in off-premises dining.

“We walk a fine line as far as how much delivery we can do out of one restaurant without it impacting the in-restaurant dining experience,” says Charles Bililies, CEO and founder of Souvla, a four-unit Greek fast casual based in San Francisco.

Bililies says the average Souvla receives anywhere from 150 to 225 delivery orders each day, which can wreak havoc on a kitchen staff charged with fulfilling dine-in orders, too. This was one of the biggest driving forces behind Souvla’s decision to launch a ghost kitchen at its nearby production and warehouse space, allowing it to alleviate some of the pressure caused by delivery and catering orders.

“By moving these orders over to a separate facility, we don’t have to balance the in-restaurant guests’ dining experiences because we’re not physically there,” Bililies says.

Though Souvla is going the ghost-kitchen route on its own, brands like B.GOOD and Dog Haus have chosen to partner with a shared commercial kitchen facility—Kitchen United—to operate their virtual kitchens. Two Kitchen United locations are up and running (one in Chicago and another in Pasadena, California), and the company plans to grow to 25 facilities by the end of 2020. Anywhere from 10 to 15 restaurant concepts share the space, each with their own custom-built back-of-house setup that allows them to fulfill delivery, catering, and pickup orders.

“Kitchen United handles everything. They deal with the front of house; they deal with all your mechanical issues with equipment; they deal with inspections and cleaning crews,” says Dog Haus partner André Vener. “Once it’s built, you just slide right in there and you’re up and running within the week.”

Not only has the Chicago location for Kitchen United allowed Dog Haus to build a presence in a new market for a fraction of the cost—less than $50,000 per ghost kitchen, Vener says—but it has also allowed the brand to fulfill the growing demand for delivery and off-premises orders. “Currently, our delivery is around 15 percent system-wide, but we have some franchisees whose stores do 50 percent delivery business,” Vener says. “If that’s going to keep growing, then we can’t ignore this. I don’t know why restaurants wouldn’t want to participate in ghost-kitchen concepts.”