Will Wendy's $20M Bet on Breakfast Pay Off?

Wendy's is taking another shot at breakfast.

Everything about Wendy’s recent breakfast announcement suggests this go-around will be different. There’s far more visible investment, at the least. It’s fast tracked to go national in 2020 from the 300 or so restaurants currently in pilot. That alone is a significant shift from past efforts when Wendy’s tried a gradual approach with operators.

Chief executive Todd Penegor said there are “incredible growth opportunities” in breakfast, and Wendy’s is “well-positioned to pursue it.” And to emphasis the seriousness of this push, the brand came out and put a price tag on it. Wendy’s said it expects to make a one-time upfront investment of about $20 million to prepare its 6,000 or so domestic restaurants for breakfast. Additionally, the company is going to hire roughly 20,000 employees nationwide.

Yet all of this wasn’t quite enough to quell pessimism in some circles. Investors sank Wendy’s stock on the heels of the September 9 news 10.2 percent—its worst day in nearly six years. And one analyst, Peter Saleh of BTIG, wrote he was “cautious on the prospects given the required upfront investment but uncertain payoff.”

The challenges: Additional labor needs when there’s already low availability. Not just for Wendy’s, but for all restaurants. Trying to grab share from more established players in the space, like McDonald’s and Burger King, and the general difficultly of daypart expansion.

The share conversation is an interesting one, and Wendy’s seemed content just rolling visits across lunch, dinner, and late-night until recently. While breakfast is habitual and profitable, it’s a street fight in quick service, as McDonald’s continues to express. Five years ago, per Euromonitor, the top earner in fast food held 17.4 percent of the morning battle. Last year, it was 14.7 percent. 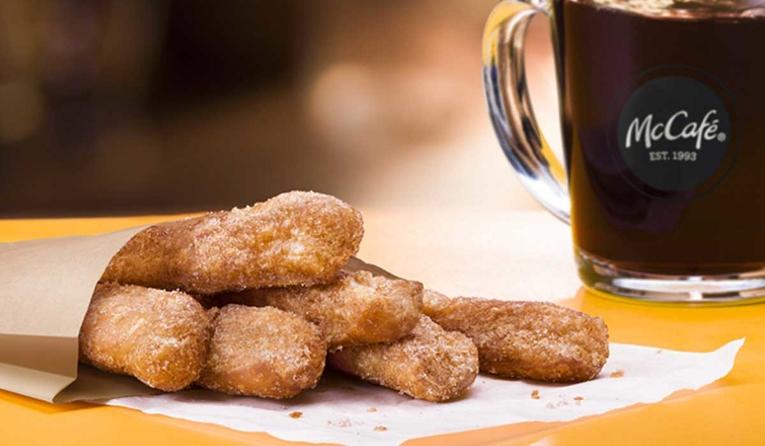 McDonald's Donut Sticks are sprinkled with cinnamon sugar for a crunchy outside and soft, doughy inside, and served warm to customers.

But while breakfast remains lucrative on a per-purchase basis, and has hovered around 25 percent of total sales, McDonald’s continues to cede transactions during the morning daypart. It’s not so much the items themselves that aren’t moving, but when they’re selling. Some of that might be tied to its all-day move and the dilution that followed. More likely, though, it’s simply a result of competitive intrusion into a daypart it once dominated. Breakfast was McDonald’s slowest growing segment in Q2, CEO Steve Easterbrook said during the company's July review, although the chain is “back to solid sales growth.” Guest counts continue to decline as “there’s been plenty of other entrants who are competing in the breakfast market,” he added, “and we don’t have it all our own way, the way perhaps we used to back in the day.”

To put Easterbrook’s point in perspective, when Wendy’s first tried breakfast in the 1980s, one out of four Americans who ate breakfast outside the home said they chose McDonald’s, according to the Los Angeles Times. At the time, fast food accounted for more than 40 percent of consumer out-of-home breakfast sales.

In 2018, The NPD Group reported that breakfast business was responsible for 21 percent of all restaurant traffic in 2018, up from 19 percent in 2013. It was actually the only growing daypart. Yet this includes sit-down chains and the rise of early morning micro-chains like First Watch, Snooze, Another Broken Egg, and others that thrive as social gathering sports with alcohol sales thrown in.

Also, counter-service brands have flooded the space. Taco Bell added breakfast in 2014. Burger King recently said it plans to ramp up efforts. And one thing Yum!’s concept had going for it from the outset was concept differentiation. McDonald’s and Burger King have had to innovate products and infuse value, like BK’s $5 coffee subscription, to inspire trial and transactions. Taco Bell’s breakfast is just very much Taco Bell. Within two years, breakfast presented about 10 percent of its business. Since? Taco Bell has reported positive same-store sales in 17 of the last 18 quarters, including 12 consecutively. Panera has also kicked up proprietary direction lately, complete with coffee stations that grind beans in-house and new wraps.

Dunkin’ and Starbucks have innovated, too, with the first launching breakfast bowls this year. Dunkin’s U.S. same-store sales increased 2.4 percent in Q1, with much of the result attributed to a demand for breakfast sandwich value deals, the company said.

Wendy’s last serious effort to introduce breakfast came in 2010 when it launched across several test markets with the goal of hitting 1,000 restaurants by the end of 2011. Adoption stalled somewhere in the 600–700-unit range, Saleh said. The effort formally ended in early 2013 with about 375–400 units remaining.

"We believe we have the right team and structure in place, and we put Wendy's fan favorites on our breakfast menu to set us apart from the competition." — Wendy's CEO Todd Penegor.

Why Wendy’s tried this isn’t a mystery. The brand initially set targets of $150,000 of incremental sales, or $3,000 per week, to break even on the investment. “General consensus was the habitual nature of breakfast made it hard to break in and uncertain cannibalization left franchisees hesitant to adopt. Combined with higher food costs, heavy couponing to drive awareness, and an aggressive response from McDonald’s, the unit economics proved challenging and this limited acceptance,” Saleh wrote.

Wendy’s rocky relationship with breakfast stretches back to when it touted a fresh alternative to breakfast fast-food competitors through commercials in 1985. Wendy’s spent close to a year testing offerings. But after just nine months, the chain pulled breakfast from the majority of its then-2,450 locations. Franchisees were given the option to keep going, but only 800 or so did, according to Mashable.

The 2010 attempt even included adding breakfast products to its value menu with “fresh-cracked eggs” and bacon cooked in store. Wendy’s also tested breakfast in 2006 and 2012. The first fell short due to products not meeting expectations and consistency concerns, the company said. The second because Wendy’s didn’t want to steal share from its core burger offerings and struggled with profitability.

A clear shift now is that Wendy’s 2020 breakfast has a very Wendy’s spin to it, with items like the Breakfast Baconator, Frosty-ccino, and Honey Butter Chicken Biscuit. It’s similar to how Taco Bell took signatures and turned them into portable, early morning versions, such as the Breakfast Crunchwrap. Staying on brand and innovating around the architecture, like Wendy’s Made to Crave and Biggie Bag, has been a big menu push lately for the chain. It has found success with value constructs in favor of price-point promotions. They do a better job laddering customers up to more premium items and are easier to market against since the message doesn’t flit in and out with each new product launch.

A spokesperson told CNN Business that Wendy’s plans to offer more items than its current pilot, including seasoned potatoes and croissant sandwiches. A full menu and prices will be released later in 2019.

So, let’s break down this opportunity further. Silicon Valley foot traffic analytics platform Placer.ai shared some exclusive data with QSR to see where the whitespace lies.

Over the past year, Wendy’s, generally speaking, has enjoyed similar traffic to Panera. But when you examine each chain’s peak visit times, Panera takes a sizable morning lead, with 27.6 percent of the bakery brand’s visits coming between 6 a.m. and noon. Only 10.7 percent of Wendy’s traffic arrived during morning hours. 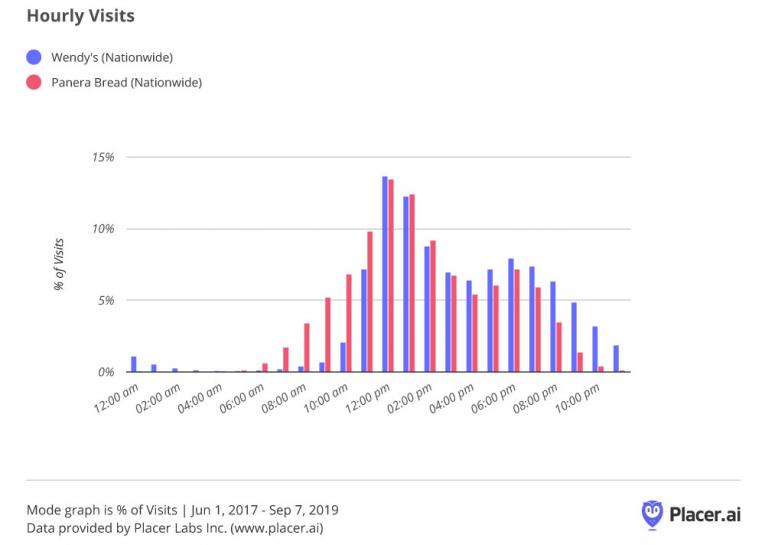 Panera is making its own push into breakfast.

Looking at McDonald’s, the chain (in red below) sees most of its visits in the afternoon. Breakfast, though, still mixes a sizable 25.9 percent of overall daily traffic. “And this is the critical opportunity that exists for Wendy’s,” Placer.ai said. “By delivering a strong breakfast offering, the brand has the chance to maximize their retail footprint by extending its peak period into morning.” 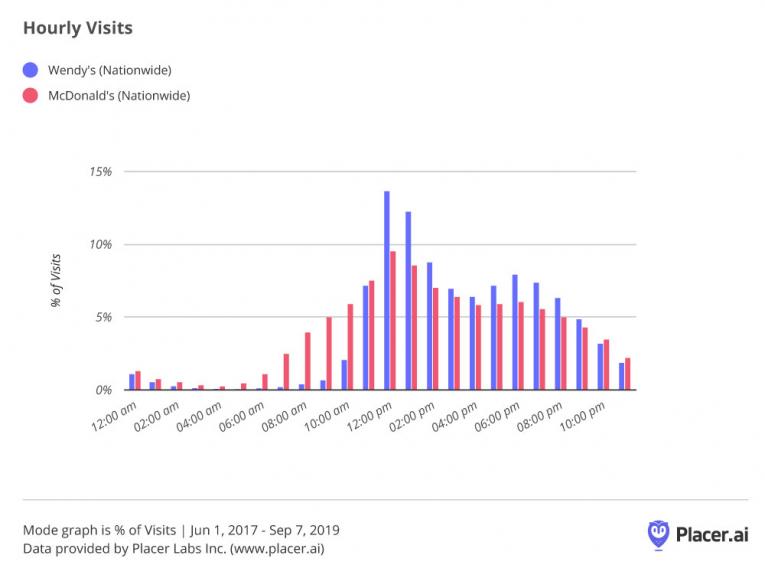 Going head to head with the fast-food king of breakfast, McDonald's.

Wendy’s has been a steady performer for some time but it’s top-line sales haven’t surged as much as some competitors. The chain posted same-store sales growth of 1.4 percent in Q2 versus 2018’s comp of 1.9 percent—well below McDonald’s. Burger King’s U.S. same-store sales lifted 1.5 percent this past quarter off last year’s 3.3 percent figure.

HERE’S WHERE THEY STACK UP BY SALES, AUV, AND MORE

Wendy’s has averaged comps of 1.4 percent since 2017, 2 percentage points less than McDonald’s.

Can breakfast help cross some of the gap? “We believe we have the right team and structure in place, and we put Wendy's fan favorites on our breakfast menu to set us apart from the competition,” Penegor said.

It’s worth noting that Wendy’s marketing presence, especially on social media, is far different than it was last time around, to put it lightly. So, there’s reason to believe Wendy’s can generate a lot more buzz in 2020. But can it make it work from a labor, cost, and profitability perspective? And can it keep franchisees engaged in the process?

“Following several years of refranchising, the company's focus has moved to improving the restaurant and customer experience through remodels, technology, and delivery,” Saleh wrote. “While these efforts should provide a steady sales tailwind, we are uncertain the breakfast launch will be equally beneficial given the heavy upfront investment and difficulty of daypart expansion.”

There are a lot of questions ahead, but there’s no doubt there’s plenty of potential, too.