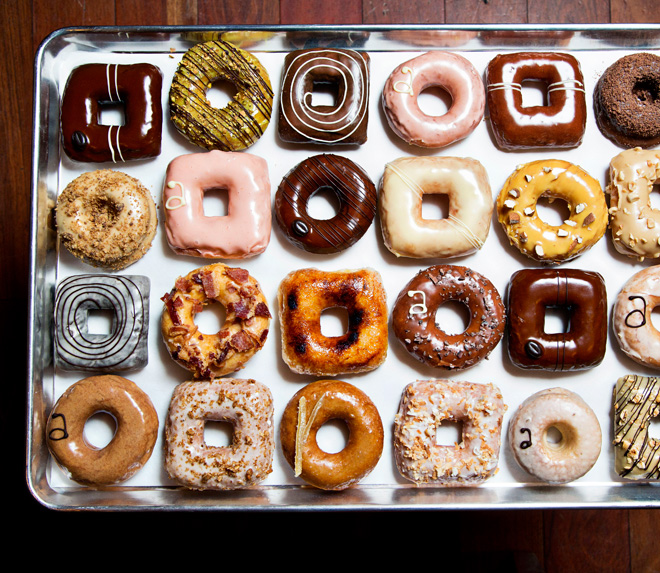 The G Street location of Astro Doughnuts, the newest breakfast fast casual in the D.C. metro area, is only a few blocks from the White House, tucked into a space so small you might miss it at first glance. But look twice; the square footage may be small, but the counter just behind the glass front doors is dishing out very big interpretations on two American favorites: doughnuts and fried chicken.

Elliot Spaisman and Jeff Halpern first opened Astro Doughnuts in 2013, hoping to re-create the classic doughnut shop they visited after hockey practice when they were growing up in nearby Bethesda, Maryland. But shortly after rolling out the doughnut concept—complete with creative options like the Maple Bacon and Crème Brulee doughnuts—they decided to expand the business’s potential with fried chicken and sandwiches that combine the chicken with doughnut buns.

“We thought it would be interesting to pair it with fried chicken—two classic American foods that needed a facelift,” Spaisman says. “They both had negative stigmas to them. And we’re using good-quality ingredients and making everything from scratch, which elevates it.”

Spaisman says D.C. has been the perfect market to launch Astro, representing a cross-section of several demographics. Even though real estate in the city is expensive and becoming harder to find with so much fast-casual demand, he says, the excitement for fast casual in the city—and the long lines that follow, especially in a location with virtually no dining room—gives a lift to new businesses like Astro.

Loyalty Programs Emerged as a Restaurant Must-Have in 2020
A Missed Opportunity for Burger King?
Convenience Doesn’t End at the Drive-Thru Anymore

How to Adapt Your Franchise Model to a Post-COVID World
Can Papa John’s Be as Big as Domino’s?
BurgerFi to Purchase Anthony's Coal Fired Pizza & Wings for $161.3 Million

Leveraging Marketing Tech to Recruit the Best Restaurant Employees
Restaurant Recovery and Reset: Outlook for 2021’s Second Half
Listen to QSR Uncut Episode 2: Is the Virtual Restaurant Bubble About to Burst?

Double Down on Digital: How Restaurant Brands are Planning for the Future
How the Asian Food Space Has Evolved in Quick Service
Chick-fil-A CEO Dan Cathy Stepping Aside in November