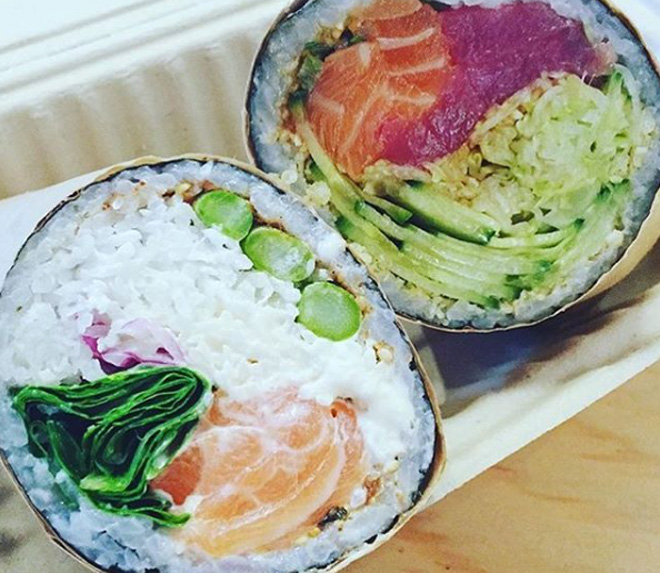 Mike Haddad and Travis Elton are childhood friends and D.C. natives who, as long-time fans of the city’s foodservice scene, wanted to contribute their own restaurant destination. Neither had a foodservice background—Haddad was a record producer and Elton a business consultant—but they thought a fast-casual concept that married high quality with strong service could be a success.

Haddad says the two—who are joined by Haddad’s wife, Ariadne, on the leadership team—wanted to offer something unique to the D.C. dining masses, something beyond sandwiches and salads.

Enter the jumbo sushi roll, aka the sushi burrito.

“We married our love for sushi in a grab-and-go format, making it portable,” Haddad says. “We also wanted to explore unique flavors and ingredients, the unexpected and not traditionally Japanese or even Asian—basically elevating the flavors you’re used to eating in sushi.”

The sushi rolls are between $8 and $12. There are also snacks like Rice Chips and Wasabi Peas for $2.

Buredo’s single location is small, with one communal table running down its center and colorful art from a local artist adorning the wall. Haddad says the team is already in growth mode, with plans to open additional D.C. locations and then to explore additional markets outside the District after that.

Kitchen Tech
Tackling Takeout (Off-Premises Solutions)
The Future of Drive Thru
Vendors to the Rescue
I Saw the Sign (Digital Signage)
Restaurant Equipment & Technology 2020
Breakfast Boom or Bust?
Pack It Up

Opinion: With Chick-fil-A and the Drive-Thru, Don’t Race to Conclusions
The Future of Fast-Food Drive-Thru Arrives Early
The 2021 QSR® magazine Drive-Thru Study

So You Want to Be a Lifestyle Brand?
Delta Variant Has Already Changed Dining Behavior
The Invincibility of The Pizza Industry

Virtual Brand Best Practices for Restaurants to Live By
How Foodservice Suppliers Can Use Predictive Analytics to Meet Demand
Restaurants Brace for Delta Surge, and Survival Tactics Yet Again