The fast casual moved up from No. 11 in Fishbowl's annual list.

Fishbowl solidified its seventh-annual list of emerging brands before COVID-19 struck. So the reality is many of these upstarts might stall, growth wise, in the near-term. But that doesn’t change the vibe. Poised to expand pre-pandemic, these concepts were ready to join the ranks of past successes. Cava, for instance, was No. 3 in 2013 but has since boomed past the cutoff at 96 locations, up 20 percent in new stores from this past year. True Food Kitchen lifted from 23 locations (when it first cracked the top 10 list in 2019) to 41 restaurants across 17 states. Shake Shack and sweetgreen are former Fishbowl picks as well.

The truth is, opportunity could be waiting on the other side of COVID-19 for well-capitalized chains. Not all that different from the Great Recession, when barriers to entry fell away and restaurant growth exploded, eventually leading to the oversaturated landscape written about so much in recent years. Per data cited by The Wall Street Journal, restaurants started to grow at twice the rate of the population ahead of the pandemic—a combination of private-equity investments flooding the field and the afterglow of a friendly retail real estate market that defined 2008–2010.

Could the same happen after coronavirus? Many chains hinted at just that. Chipotle noted it’s seeing much friendlier response from landlords concerning “Chipotlane” drive-thru locations in complexes where flow-through traffic was a setback before. Domino’s CEO Ritch Allison said in April, “It has been a pretty tight real estate market for a while now, and we don't know exactly how much that's going to open up. But our guess is that it probably does open up a bit as we look out in the medium to long term.”

“I can tell you that for our corporate store business, I would love to accelerate and go even faster,” he added. “And if there are opportunities to do that, we are most certainly going to."

And those are the big players. What about emerging chains? It will be a case-by-case basis, of course, but there’s plenty of reason to believe they could jump at the chance just like larger concepts. For a case study, think back to fast casual’s boom.

Industry consultant Pentallect Inc. previously noted that the segment’s growth slowed to between 6–7 percent in 2017 from about 8 percent in 2016. But what’s important to circle is what happened the previous five years. Then, fast casual disrupted the restaurant landscape with 10–11 percent growth for five straight calendars.

It did so right in the heart of the Great Recession, as concepts leapt into strip centers and other vacated store fronts, securing capital easier than before the financial crisis. And they also filled a consumer need for high-quality, affordable, and convenient food—a reality that would eventually push quick service to rethink operating models, food quality, and the customer experience. It influenced casual dining, too, which stepped back from its “all-things-to-all-people” direction and shifted to its core.

Will this happen again when the COVID-19 dust settles, especially if big chains take off in the early months? That growth at the top might just provide opportunity for emerging and upstart brands to mix up the industry and bring something different to consumers—akin to the early 2010s.

As always with the pandemic, though, only time will tell. Anybody who tells you they know what’s coming probably also has a cure-all elixir in their pocket for sale.

Here is Fishbowl’s top 30 for 2020. The list was guided by quantity and quality of reviews online, as well as ratings over time. Questions like, are ratings remaining strong or dropping in value? Are reviews per location growing as consumer enthusiasm builds. Do ratings remain strong despite varying conditions over the course of the year. The max for units this year was 50, down from 75 in 2019.

Here’s a look at some of the rating notes. 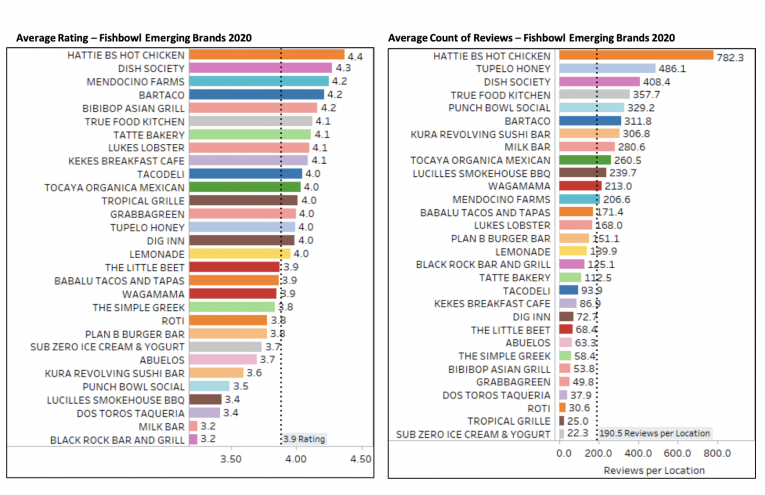 The why behind the ratings

Fishbowl conducted “Sentiment Analysis” to look behind the review curtain. Five major components contribute to the value equation—food, beverage, ambiance, service, and price. When the value equation is unbalanced by any component, the experience suffers and the ratings reflect that.

Food topped the list of positive mentions for Fishbowl’s Top 10 emerging brands. Quality and freshness were expected, the company said, but flavor and uniqueness won over discerning reviewers. Good service was also a must. Ambiance proved a critical factor, too.

A quick COVID-19 side note, this historic equation could be in line for serious disruption.

A recent study showed that 63 percent of guests listed “safety precautions” as the most important aspect of the dine-in experience today. That was second only to “delicious food,” which clocked in at 74 percent.

This is going to show up on Yelp, Google, TripAdvisor, and so on, in the post-lockdown days. How your restaurant sated fears over COVID-19’s spread is going to be a review lever that influences customers who read these to show up or pass. And people will speak about the experience. The future of hospitality isn’t just tied to good service and great food anymore. It also boils down to making people feel secure and safe. That would have been an improbable notion just months ago, but it’s an anchor of this “new normal” that’s dominating discussion.

To put it simply, great food, followed by service and ambiance, remained the top qualities of emerging brands. While other factors will enter the mix, those things won’t ever change.

A deeper dive into the top 10

Sentiment summary: Hattie B’s customers mention most hot chicken, friend chicken, mac n cheese, chicken sandwich, potato salad, banana pudding, and pimento mac. Other terms that popped were “worth the wait,” even when it’s a “long line” out the “door.”

Founders: Mario Del Pero and Ellen Chen in 2003 (current CEO is Kevin Miles, the former head at Zoes Kitchen. Miles took over for Harald Herrmann, the former president of Darden’s $1.5 billion Specialty Restaurant Group, who left in February for nonprofit Second Harvest Food Bank of Orange County. He led Mendocino Farms since 2017, when he took over as CEO following TPG Growth’s investment in the brand).

Of the above ownership, TPG Growth acquired its stake from L Catterton. The firm invested in Philz Coffee in September 2016 and has invested in consumer brands Airbnb, Spotify, Beautycounter, Gelson’s Markets, and e.l.f. Cosmentics. Amazon, on the heels of a 2015 investment from Whole Foods Market, is also an investor in Mendocino Farms.

Sentiment summary: The brand earned top marks for “fried chicken,” fried green tomatoes, Brussels sprouts, shrimp grits, and French toast. It did so for “great atmosphere,” and “Sunday brunch,” too.

The chain is expanding into the U.S. after a recent joint venture partnership with Conversion Venture Capital. The late January deal added Robert Cornog Jr. and Richard Flaherty as operating partners—two operators who helped Punch Bowl Social grow. It’s an 80/20 joint venture partnership with The Restaurant Group (Wagamama’s parent company) to expand across the U.S. There are more than 200 locations in 27 countries, include six stateside.

Sentiment summary: Reviewers recommended varieties of ramen—chicken, shrimp, pork, rib, pork belly, and beef. Pad Thai, cauliflower, katsu curry, and steak bulgogi also were top mentioned. Signaling perhaps growth potential, reviewers frequently left a write up after their “first-time visit” and mentioned “thanks to the cuisine and great service,” and a “next time,” promise to come back up.

Of note: The chain is an offshoot of full-service Mexican restaurant Toca Madera in Los Angeles. Both concepts are owned by The Madera Group. On January 29, the group announced plans to open 11 new locations throughout the U.S. and abroad by the end of 2019. This after receiving a $20.85 million capital investment from Breakwater Management LP in November.

Of note: The chain was acquired by Memphis-based Spell Restaurant Group in October 2019. Eat Here Brands, the restaurant group that previously owned Babalu, filed for Chapter 11 bankruptcy protection on July 30. Spell Restaurant Group won the bid to acquire the brand October 18. Babalu had grown to as many as nine locations.

Sentiment summary: Reviewers lauded tacos—pork belly, fish, shrimp, and chicken. Other entrees like the burger, crab croquette, steak and eggs, crab cakes and lamb sliders get raves, along with sides like street corn and Brussels sprouts. The” tableside guacamole” and “great atmosphere” make Babalu a favorite.