Inside the Blazing Growth of Wayback Burgers

The 155-unit burger chain is expanding across the globe thanks to an operating policy that puts franchisees first.
Emerging Concepts | June 2018 | Danny Klein

Wayback Burgers has more than 500 commitments to grow globally.

When Bill Chemero and John Eucalitto came on board in 2008, Wayback Burgers had 10 restaurants—eight company-run stores and two franchises. They took a year to solidify operations before embarking on a growth tear few brands in its space could rival. Fast forward to the end of 2017 and there were 155 stores across 29 states in the U.S. With international and domestic agreements included, Wayback has more than 515 commitments to expand worldwide. Wayback’s growth chart hasn’t dipped and spiked all that much in that span, either. Here’s how it breaks down. To note, these do not include international sales and openings, and Wayback represented a 50-store sale as one franchise sold and another 20-unit deal as one franchise sold. 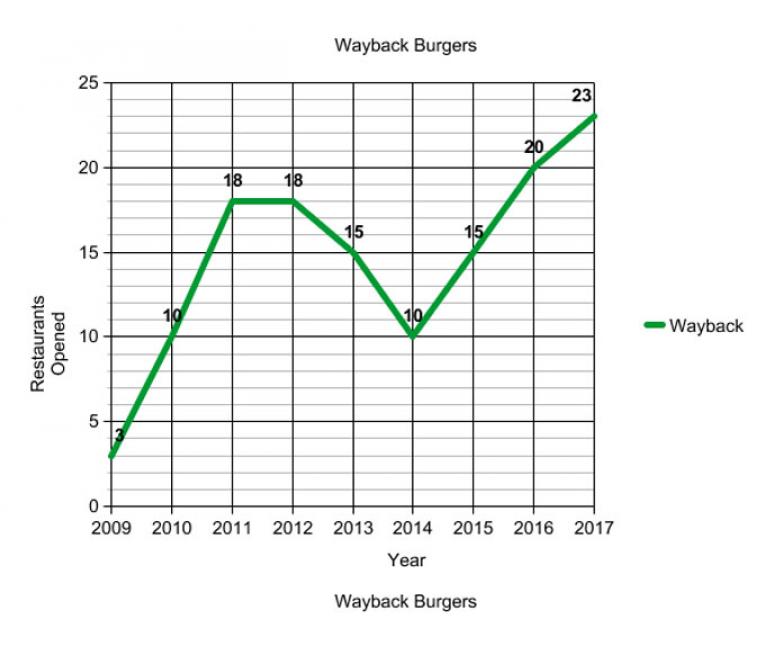 Beside the steady growth of Wayback, founded in 1991 in Newark, Delaware as Jake’s Hamburgers, it’s worth noting where some of the heavy lifting was done. Wayback set to work on expansion right in the thick of the Great Recession, more than doubling its unit count in a two-year span when many brands were constricting. There are a bevy of reasons why, naturally, but Chemero, Wayback’s executive vice president, points to one foresight he believes ignited the brand’s growth.

He noticed, as many operators did, the cost of rent rising at an alarming pace across the country. “And sooner or later the price points weren’t going to be … well, you couldn’t sell enough burgers to pay the bills and make profit. It was that simple,” he says.

Wayback’s answer: the brand went small. It started looking at 1,600-square-foot boxes as its vehicle for growth. “It was funny,” Chemero says. “A lot of our competitors said you guys are crazy. You can’t do enough volume in a small box like that to pay the bills. We’re like no, you’re wrong because technology has finally caught up with the restaurant industry.”

Wayback was a technology pioneer in the burger space. Want proof? Olo, a digital juggernaut that currently powers digital ordering and delivery for more than 200 restaurant brands across 45,000 locations, and is used by 100 million-plus customers, linked with Wayback some eight years ago. “They still thank us to this day because we were one of their first customers,” Chemero says.

When the app craze hit in 2011–2012, Wayback was an early adopter with delivery and mobile pay platforms. The chain had digital capabilities for guests to curbside pick up, order-ahead, and accept delivery in some markets well before off-premises was the headline grabber it is today. Some franchisees and operators were even jumping in their cars and bringing food to guests.

Chemero adds that Wayback is currently working on a “game-changer” in the delivery space that will erase the burden of the delivery dilemma. He couldn't share exact details just yet. “The individual restaurant owner, how do they pay for that? How do they absorb 35 percent off the top on each order? Thirty percent on each order. Something’s got to give,” he says of third-party vendors.

Another perk of being a small-footprint operation was the low initial investment, which attracted a wide pool of franchisees. Wayback averages about $350,000 to open a restaurant and charges a 5 percent royalty fee. The desirable entry point is one reason it keeps landing on best franchise lists, including No. 8 on the latest FranchiseRankings.com collection for fast casual options. Perspective operators need to have liquid capital of $125,000 and a net worth of $350,000 to qualify.

Chemero says the financial allure doesn’t sum up the story, however. Wayback looks at the service equation from two sides of the same spectrum: Its operators must put hospitality on a pedestal, and the company’s 30 or so corporate employees must do the same for franchisees.

"A burger is a burger is a burger, to some extent. But it really boils down to customer service. When you really think about it, it’s all about the dining experience for the customer." — Bill Chemero, executive vice president at Wayback Burgers. 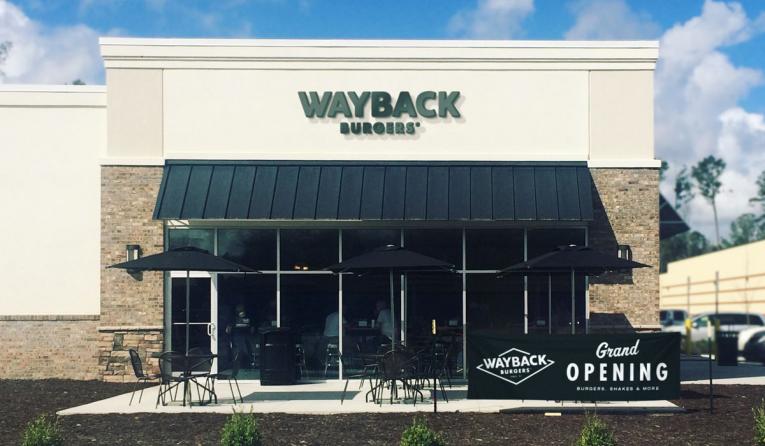 A 1,600-square-foot prototype is a key part of Wayback's growth.

And it all effects the bottom line. Wayback is financially conservative, Chemero says, and operates according to a no-debt ethos. He says the company doesn’t have a dollar of debt. No loans. It runs purely from the royalty flow of its franchisees.

In the early days, owner’s capital kept Wayback going until critical mass became part of the income process. “Next thing you know, the royalties are paying all the bills,” Chemero says. “That’s always been our philosophy.”

When you think from that perch, picking franchisees is a pretty critical conversation, especially since there are currently only two company-run stores. He says every candidate is measured from the perspective of “do we really want to be in business with this person or persons, because we don’t need the [franchisee fee] to pay the bills. We really look at it from what are they bringing to the table.”

Nine years later—and Chemero is hesitant saying this so not to jinx the company—Wayback hasn’t had a single lawsuit. Not one arbitration. No mediation.

Chemero looks at it this way: Yes, it matters if your burger is best-in-class, but there are so many burger concepts in the marketplace that quality isn’t the nuts-and-bolts recipe to franchise success. “A burger is a burger is a burger, to some extent,” he says. “… But it really boils down to customer service. When you really think about it, it’s all about the dining experience for the customer. If the food was good, great. They expect that. But if the service was over the top, they’ll talk about it, and they’ll come back.”

Wayback trains and drills down on service with its franchisees and expects the same from its corporate employees. There are management certification programs every manager must go through and pass. There’s also a Wayback University training program for franchisees, which also must be attended and passed. In-house Wayback employees are held to similar standards.

Wayback also believes in development caps. It typically sells no more than three units to any perspective operator. About 34 percent of its franchisees currently have more than one store, and most of them opened one at a time, Chemero says.

The international aspect of Wayback’s future is an intriguing one. There are stores in Argentina; Brunei; Sudan; Morocco; Saudi Arabia; Kuwait; Pakistan; and Malaysia. Wayback has executed master franchise deals to grow in 37 provinces/countries in the Middle East; Northern Africa; South Africa; Argentina; Brunei; Bangladesh; Ireland; Alberta, Ontario, Manitoba, and Saskatchewan, Canada; and the Netherlands. Pending letters of intent are out to Western Germany and the U.K. as well.

Domestically, Chemero says the Southwest is Wayback’s current hotspot—Texas, Arkansas, Oklahoma. But it really comes down to the operator and the real estate. The chain has an in-house team to go over every location and physically walk the sites before giving the operator the go-ahead.

On a last note, Chemero says Wayback’s stable leadership has steadied the company and built strong relationship with banks and lenders. Combined with Eucalitto, the duo has 60-plus years of restaurant experience.