Restaurants Race for Employees as Recovery Heats Up

Taco Bell and other fast-food chains are bracing for a hiring spree.

In the Department of Labor’s most recent job report, released last Friday, restaurants added 175,800 jobs in March. While lower than February’s 309,000 rate, it signals continued mobility and the fact restaurants across the country are getting back to business. Restaurants have added roughly 4.2 million jobs since April 2020 (a month where 5.5 million jobs vanished alone). At that juncture, the sector employed 6.3 million people, which represented the lowest figure in three decades.

As of March, however, restaurants employ more workers than any time since the crisis began—10.5 million.

Yet challenges loom out of this shift. Even at 10.5 million, which is up from 10.3 million the previous month, restaurants still boast about a million fewer employees than this time last year and 1.8 million down from February 2020—the last period before COVID-19 crashed our collective realities.

In the week that ended March 16, Black Box Intelligence said restaurants reported the best year-over-year comp sales and traffic growth since mid-January. It was also the third best comp sales performance since the beginning of the pandemic and second-best week of the COVID era in terms of traffic.

Excluding recent weeks affected by severe winter weather, each week since the end of 2020 has posted single percentage point improvement in comp sales. This is a significant trend in the right direction from the negative 13.3 percent result reported in December.

And one thing to circle—limited-service restaurants returned to positive comp sales for the second consecutive week.

On average, 60 percent of guests in a Black Box study said they frequented limited-service restaurants three times or less during the week, while 40 percent visited four times or more. This mix was encouraging because it reflected pre-COVID figures.

In fact, a strong contingent of quick-serves are comping well ahead of pre-virus levels, from A&W (single-brand franchises up 9.7 percent last year) to Wingstop (20.7 percent in Q1, or 30.6 percent on a two-year stack) and more.

So the good-news, bad-news after-shock is business has started to surge, but it might be more sales than a lot of restaurants can staff in terms of labor and who is ready and willing to work.

Operators across social media have lamented hiring concerns. Payrolls around the country rose by 916,000 in March as the unemployment rate dropped to 6 percent.

Throughout the past year, millions accessed expanded unemployment benefits. In President Joe Biden's $1.9 trillion American Rescue Plan, a weekly $300 unemployment boost was added until September 6. Stimulus payments, prior labor issues (like the shift away from a young workforce), and fears over coronavirus have all stirred hiring challenges, as well.

And it’s leading to a race for talent as restaurants try to meet surging demand. Whataburger announced last week it was promoting general managers to “operating partners” and providing a bonus of up to 150 percent of their target incentive. Additionally, salaries would push to $100,000 and above.

If the battle for retention and recruitment was fierce before the crisis, operators are likely in for a spring war unlike any other. Especially those in quick service. 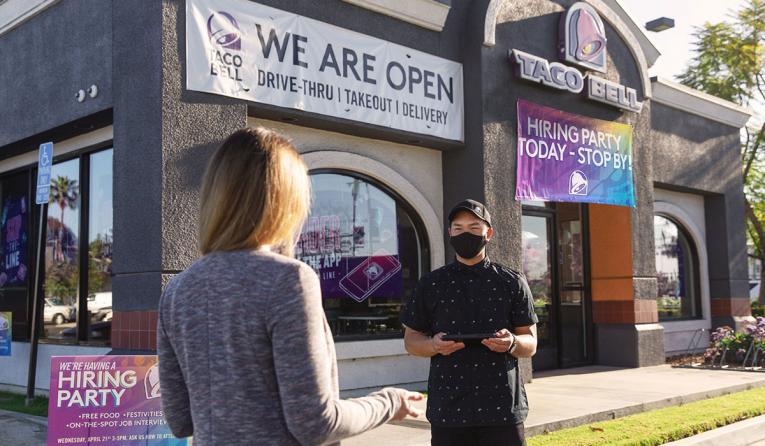 Taco Bell wants to hire at least 5,000 people in its upcoming hiring event.

Taco Bell on Tuesday announced its fourth-annual Hiring Parties event as it braces for “continued growth and reopenings.” This provides some insight into what could broadly be in store.

To be held April 21, Taco Bell will convert parking lots into job fairs, with on-the-spot interview opportunities taking place at nearly 2,000 participating company and franchise-run locations nationwide. The goal being to hire at least 5,000 people.

Taco Bell will host these “Hiring Parties” outside (due to COVID) in locations like patio areas. Some stores will even offer “drive-up interviews” where candidates won’t even need to get out of their cars.

“It’s no secret that the labor market is tight, which is why we are thrilled to host our fourth round of Hiring Parties in partnership with our franchisees,” Kelly McCulloch, Taco Bell’s Chief People Officer, said in a statement. “This initiative continues to be successful for us year after year, and we welcome candidates to join in to learn more about what makes Taco Bell a great place to work. We’re eager to welcome prospective new hires into the family and show them why working at Taco Bell can be more than just a job.”

Like Whataburger and other chains, beyond hiring events, Taco Bell continues to bolster its incentives to lure talent—not just from other restaurants and workplaces, but out of the house and from unemployment, too. Recently, it announced GMs at corporate units would have expanded leadership benefits, including up to four weeks of accrued vacation per year. These GMs also now receive four weeks of paid “baby bonding” time for new parents and guardians and eight weeks of fully paid short-term disability after the bird of a child.

In addition to standard roles, Taco Bell said it’s looking for “bellhops” to support drive-thru service with tablet ordering. This will be part of a real-estate shift complete with multiple new prototypes, including revamped drive-thrus and the “Go Mobile” design.

Taco Bell said it plans to have 10,000 locations open globally this decade.

The brand began its “Hiring Parties” initiative in 2018 with a test at four Indiana locations. These included free food, party games, on-the-spot job interviews, and gift-card signing bonuses. The latter of which generated viral buzz for the chain.

The big draw, though, was Taco Bell ability to skip the advanced application or callback stage of hiring. These events generated nearly 80 in-person applications and 40 new hires out of the gate. More than 300 online applications came in, too.

On a similar labor token, Firehouse Subs said Monday it’s hosting its first national recruiting event from April 6 to April 8, with the goal of filling more than 12,000 roles.

Sonic Drive-In announced in late March, “during a time of unprecedented challenges within the employment landscape,” it would seek to add 20,000 employees.

All three stressed a common point for potential employees, and something almost surely something you’ll hear often in the coming weeks—flexibility. Work-from-home trends and hesitation to reenter the workforce has driven the gig economy to a new level.

“Taco Bell restaurants have as much variety in its job opportunities as it does in its menu,” the company said.

“From Sonic’s iconic carhops to multi-unit leaders, the brand offers a wide range of opportunities centered on the growth and development of employees,” Sonic said. “For the past 26 years, drive-in team members nationwide have participated in a series of individual and team trainings as part of the Dr. Pepper Sonic Games, the brand’s premier training program that strengthens Carhops’ teamwork skills, and guest and operational service. Additionally, many leaders within Sonic have built careers with the brand, from working in the kitchen and serving guests to becoming successful operators and franchise owners.

“Flexible work hours are also available to provide drive-in team members, management and leadership the support needed to succeed in and outside of work,” it added.

Added Firehouse CEO Don Fox: “Our brand is lucky to be in a position where we can expand our restaurant teams and create opportunities within our local communities during these challenging times.”

On the full-service side, Darden announced, starting in late March, tipped and non-tipped employees would now earn at least $10 per hour, including tipped income. The wage is expected to rise to $11 per hour in January 2022 and $12 per hour in January 2023. This is almost surely a sign of things to come as well.

“I think our greatest challenge right now is staffing,” CEO Gene Lee said during Darden’s Q3 review. “It’s staffing, trying to attract people to come to work, that’s why we’re strengthening our employment proposition, which is already strong. We’ve got to staff it, we’ve got to train people. We train people now in a very high-volume environment. As I think about what we’re focused on, it’s really back-to-basics restaurant operations. And one of those things that we focus on is hiring great people and having great certified trainers that are able to train those people to bring our brands to life.”

Darden has invested $200 million in programs benefiting employees since March 2020. On average, hourly workers earn more than $17 per hour, including servers and bartenders, who earn more than $20 per hour, Lee said.