Despite the growing allure of nationwide shipping, the bakery concept remains steadfast in its brick-and-mortar approach.

When Cinnaholic founders Shannon and Florian Radke pitched their vegan cinnamon roll concept on ABC’s reality series “Shark Tank,” they wowed investor Robert Herjavec. He offered the two a deal—$200,000 in exchange for 40 percent equity. Both parties agreed, but with one caveat: Cinnaholic would use the investment in pursuit of growth toward nationwide shipping.

After the episode aired, the Radkes pulled out of the deal. Rather than focus on Herjavec’s proposed idea of making the product accessible to the whole U.S., the brand concentrated efforts on the storefront side.

The Shark Tank episode aired more than six years ago, and with changes to consumer eating habits—namely because of a global pandemic—demand has skyrocketed for nationwide shipping. But Cinnaholic stands by its reasoning.

“Shipping never crossed our minds. We don't want to damage or ruin the quality and integrity of our product and it's just best served fresh and warm day-of, even for catering orders and whatnot,” says Heather Stennis, director of marketing at Cinnaholic. “We just really wanted to focus more on the third-party delivery, or the online efforts of letting guests order themselves and schedule their own safe pickup.”

Before Shark Tank publicity in 2014, the California-based concept operated out of one storefront in 2009. Cinnaholic aimed to set itself apart with a completely vegan product.

At that time, Cinnaholic partnered with third-party platforms, but only as a means to bring awareness. Yet after showing its deserts on Shark Tank, Cinnaholic witnessed a demand explosion. The company replaced Herjavec’s proposed shipping initiative with a franchising program, and has scaled since through this model.

Even when the pandemic came, Cinnaholic’s strategy seemed to work. The brand strategized with franchisees on a case-by-case basis to adhere to COVID restrictions as Cinnaholic locations were spread throughout several states. The franchises also implemented social distancing markers in line with CDC guidelines. 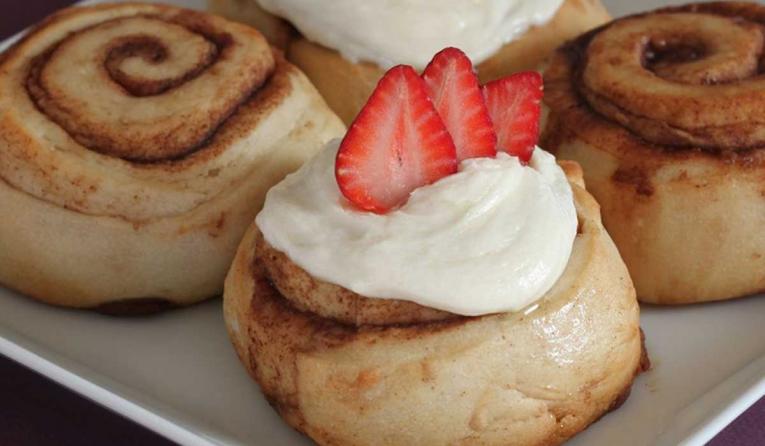 The brand expanded its third-party delivery services in April.

The pandemic didn’t change much of Cinnaholic’s physical presence as the company kept its real estate at 900–1,200 square feet. Instead, the biggest changes Cinnaholic implemented were on the online front. As a grab-and-go concept, the brand had an off-premises advantage compared to full-service concepts. But the shift to online ordering was a tactic it had to implement.

“There were obviously concerns at the initial start of things. We all kind of quickly scrambled and pushed everybody to do online ordering—that was a system we did not have in place,” Stennis says. “We just gave [franchisees] the confidence that you don't have to necessarily rely on in-store traffic.”

The brand expanded its third-party delivery services throughout April to move beyond in-store traffic. And while Stennis says some franchisees are concerned about the future, sales have consistently grown.

After a period of waiting to see what COVID-19 would bring, Cinnaholic opened its first pandemic-era location in June. The company was hesitant, but the two hour-long wait time at the restaurant’s grand opening signaled demand for the brand hadn’t stopped. Between June to December of 2020, Cinnaholic opened 14 locations. It ended up closing 2020 with overall system growth of 29 percent, with franchisees controlling all 50 of its locations.

Now Cinnaholic is ramping up plans to expand. Throughout 2021, Cinnaholic projects to open 20 locations and expand to markets such as Austin, Texas, and New York City, along with growing internationally. The brand has five locations in Canada, and plans to continue building stores beyond U.S. borders.

But despite the pandemic- or investor-driven pivots the brand comes across, Cinnaholic’s core remains the same.

“We've been consistent with our menu and haven't made changes,” she says. “Regardless of the environment around us, we're continuing to serve quality products with great customer service.”