Charleys Hopes 600 Locations is one Milestone of Many

The classic brand is revamping its menu and strategy as it takes aim at 1,000 stores.
Web Exclusives | December 5, 2018 | Danny Klein

With Americans love for chicken on the rise, Charleys wanted to cash in.

Since its founding more than 30 years ago, Charleys Philly Steaks has expanded along a robust non-traditional path. Is there one in every major mall in America? The reality is probably not that far off. In September, the chain, started in 1986, celebrated its 600th opening when it debuted in Lancaster, Ohio. As much as this was a milestone for Charleys—especially considering it has called Ohio home for the last 32 years—the location was as much an indicator of what’s to come as it was of what the legacy brand has accomplished.

The store became only the second Charleys nationwide to feature its new menu concept with chicken wings and tenders alongside Philly cheesesteaks. It was also just the second restaurant systemwide to feature a drive thru, as well as Charleys’ new warehouse/farm-style interior design, which combines raw industrial elements with organic finishes.

This updated menu and design figures to be a focal point as Charleys continues expanding across the country. But even that growth chart is shifting significantly. The chain plans to open an additional 400 stores and hit the 1,000-restaurant mark by 2022. However, the vast majority of these new Charleys locations are targeted for strip centers. This coming year will mark the first time in Charleys’ history that strip center development exceeds mall growth.

Charley Shin, the chain’s chief executive, says that, of the 600 locations, about 420 or so are currently in malls. About another 100 are military locations and, by summer, 70–80 will be housed in strip centers.

There are several reasons Charleys is shifting direction. The health of America’s malls isn’t necessarily one of them, though. Shin says he’s seen A malls get stronger and B malls ramp up. It’s really the C malls that are floundering. That’s a phenomenon reported by restaurants and retailers nationwide. It’s one of the reasons The Cheesecake Factory has stood on solid footing with its center locations—the fact it’s historically targeted top-tier mall destinations over sub-par ones with cheaper rents. 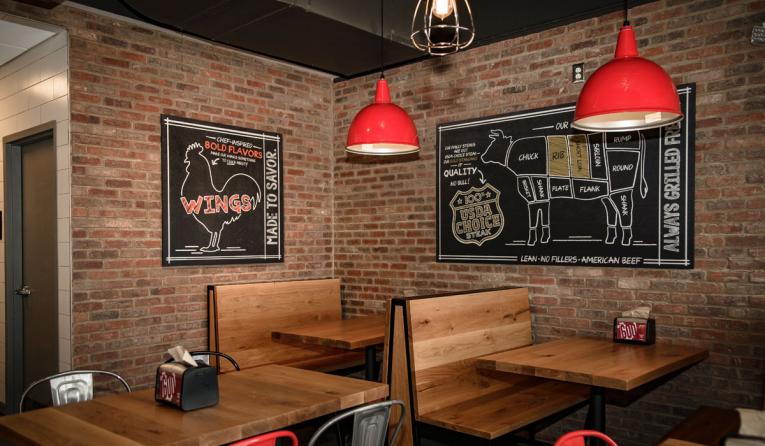 For the first time in its history, 2019 will have more strip-center development than mall growth for Charleys. 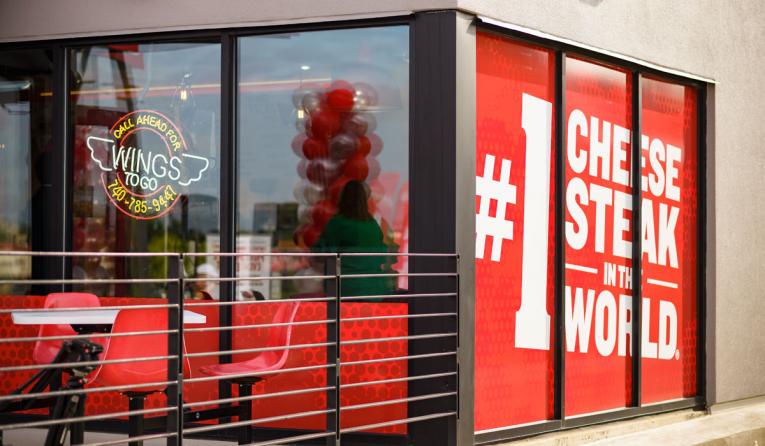 The new design is a more whimsical, inviting take on the classic brand.

“Actually our business has been very strong in the mall environment,” Shin says. “We had same-store sales grow mid-single digits [this past year], which is much stronger than industry average.”

The strip center and standalone locations present an entirely different challenge. Mall dining tends to be an impulse decision. Customers are there for another reason and expect to grab a bite, or not. Where they choose isn’t necessarily defined when they get into the car. While that spontaneity can be true of non-mall restaurants as well, it’s nowhere near as frequent.

Shin says the strip center Charleys have to become destinations. That’s a challenge, but it also has its perks. “Customers can access our cheesesteaks now a lot more readily than going, parking in the mall, and walking all the way through the mall to the food court. We’re actually making it a lot easier for customers to visit us.”

That benefit is balanced by losing guaranteed foot traffic. Shin says the marketing effort is much more focused and intense at strip center locations. They’ll launch a social campaign around a 3-mile radius about a week before opening. Charleys will also typically purchase a billboard in the area a month prior to get the name out and build anticipation.

And Charleys’ growth trajectory, which calls for about 70 units next year as opposed to the 40–50 its tracked in recent years, is circling the brand’s strongest markets, including Florida, Texas, and California.

As for the menu, Charleys has long offered chicken as part of its Chicken Philly menu offerings. A few years back, Shin says, he was looking at protein consumption and realized the brand should expand this offering into other tiers. He cited a forecast that calls for chicken consumption in the U.S. to almost equal pork and beef combined in the future.

Per capita U.S. beef consumption peaked in the 1970s and has since declined by about one-third, according to USDA data on food availability. Pork consumption stayed mostly constant over the same period, while consumption of chicken more than doubled.

There’s a lot of data out there about just how many chicken wings Americans eat, especially in regards to the Super Bowl. But one 2017 study, from Moore’s Marinades & Sauces, suggested the average meat eater will devour roughly 18,000 chicken wings in their lifetime. About 1.33 billion chicken wings were consumed during last year’s Super Bowl, by the way.

And it goes without saying that entire restaurant chains have been built on this chicken preference. Charleys’ new menu features wings tossed-to-order with 10 chef-inspired flavors ranging from Angry Ghost and Nashville Hot to milder options like Zesty Lemon-Lime Rub and Sweet Teriyaki. Customers can order Classic Wings or Boneless Wings and choose from new sides including celery sticks, coleslaw, baked beans or Texas toast.

“It was almost a year of research and now it’s showing great results,” Shin says.

“We’re just very thankful for what we’ve been able to do with 600 units,” he says. “And we’re looking forward to growing to 1,000 units with this improved format.”