Automated voice ordering will be rolled out to roughly 250 stores.

Checkers and Rally’s CEO Frances Allen believes “without a shadow of a doubt,” the restaurant industry’s labor shortage is here to stay.

And the numbers back up her position. Food and drink places added only 42,600 jobs in December and just 33,600 in November. That industry had 11.66 million workers on payroll last month, which is still more than 600,000 employees shy of where it was in February 2020.

The 850-unit Checkers feels the pinch like most of its peers. Shifts that normally require five people are being run by three or four workers on a consistent basis.

“You've got to be a master at multitasking, and you've got to be able to listen to the new order in one ear, pay attention to it, enter it onto the POS while you're expediting the order in the car in front,” Allen says. “And that is very, very challenging and very stressful.”

With recruitment and retention as important as ever, Checkers is focused on taking away those pain points and making the work environment more enjoyable, in addition to financial incentives, like the chain’s daily pay program that more than 70 percent have signed up for.

As a brand that’s pioneered the double drive-thru for multiple decades prior to its recent popularity, the off-premises channel felt like the best place to relieve the biggest amounts of stress.

This year, Checkers is partnering with Presto to become the first restaurant to nationally roll out automated voice-ordering technology, doing so at roughly 250 company-run stores by the end of 2022. The innovation, which recognizes accents and colloquialisms, showed order accuracy of 98 percent and higher without much employee intervention during tests, far exceeding the original goal of 95 percent.

“If you can have Alexa or Google Assistant in your home looking at the weather and telling you what's on the news, it felt very plausible that you could also have an Alexa equivalent taking orders,” Allen says.

The CEO estimates the technology saves the cost of half of one employee, but she says that’s beside the point. Checkers' intention isn’t to replace jobs—quite the opposite. The goal is to alleviate pressure and make jobs easier over time.

To Allen, the AI proved itself as the best way to provide much-needed help to team members.

“There's nothing that upsets the guest more than getting an order wrong,” Allen says. “But our people don't do it on purpose. It's because they are so stressed and having to work so fast that mistakes happen, but on the positive side, getting that consistent upselling is a real benefit. How much revenue that drives, we've yet to quantify, but as they say, that's not really the motivation here. The motivation is to bring relief to very understaffed restaurants.”

Checkers removed bits of skepticism from franchisees and company-run operators when it showcased the technology during a conference in mid-December. Managers of corporate stores "can’t wait to get it into their restaurants” and many franchises have already signed up to add the innovation.

Presto is Checkers’ partner of choice, but Allen says the brand successfully tested an alternative platform to give operators some options.

“I think it's just going to be a matter of when those installations can be scheduled,” she says. 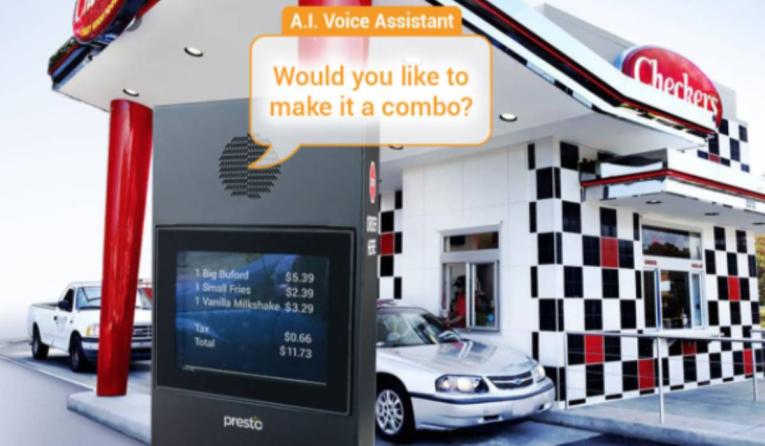 The move is part of Checkers’ overall objective to remain “disruption ready,” a mindset the chain has exemplified multiple times throughout the pandemic.

For instance, when COVID arrived, the chain was already at a distinct advantage because of its decades of expertise with drive-thru, but that didn’t mean there wasn’t room to pivot. Adjusting to the rise of off-premises, Checkers ramped up third-party delivery partnerships, launched a fully integrated app and loyalty program that now has close to 1 million users, and dedicated one drive-thru lane to mobile ordering at two-thirds of company-run stores.

To improve throughput, Checkers is continuing the rollout of its state-of-the-art Fit Kitchen, another measure dedicated to making the lives of employees easier.

The new format eliminates about a mile and a half of unnecessary walking per hour collectively, replaces flattops with clamshell grills to boost quality and consistency, and features holding equipment that keeps products hotter for longer, fry stations and grill positions with better capacity, and removes final cooking processes from most fried products. The new format was installed at 80 company-run restaurants in 2021.

READ MORE: Checkers & Rally's Rolls Into the Future with New Look and Momentum

One of the first menu innovations enabled by the Fit Kitchen was Checkers’ fry-seasoned chicken tenders, which became one of the chain’s most successful product tests in the past decade. The item is slated for a February launch systemwide.

The Fit Kitchen is a hallmark of Checkers own “restaurant of the future” design, which aims to improve experiences at walk-up windows, patios, and drive-thrus. That means better lighting, QR codes, reimagined seating areas and bathrooms, and a modernized look and feel.

After revealing the prototype in January 2021, two stores in Florida have been remodeled with the upgraded assets.

“They're doing extraordinarily well,” Allen says. “Two restaurants does not make a test, so we really can't say how those sales are doing. But I have to bite my tongue because they are doing so well. We got to have critical mass and do another six remodels.”

The prototype, part of a five-year growth plan, was made possible by parent company Oak Hill Capital, which handed Checkers a $20 million capital injection to start 2021.

Checkers' goal is to increase unit count by 50 percent in the next five years, putting it close to 1,300. Sixty-two are expected to open in 2022. Agreements are largely with new multi-unit franchises, but there are a few existing operators who’ve signed deals.

Four company-run stores opened in 2021, so the brand is still developing its own fleet where possible, but a majority of future growth will be franchise-led. Seventy percent of the brand, or roughly 600 stores, are operated by franchisees.

Every restaurant built after November will feature the prototype design, and given the chain’s aggressive growth plans, Allen says the “restaurant of the future” will soon become the prevailing look of the brand.

“With 3x white space in our existing markets, we have ample opportunity to grow significantly over the next five years,” Allen says.

Thanks to an operating model fit for COVID times, Checkers’ revenue grew 3.8 percent in 2020 year-over-year, and eight percent in 2021. In an effort to make its franchise offering even more appealing, the brand is aiming to increase EBITDA by 50 percent to $60 million by 2025.