Checkers & Rally's Rolls Into the Future with New Look and Momentum

The chain's "restaurant of the future" model will debut this summer.

If you scan “restaurant of the future” prototypes popping up in recent months, one observation is hard to miss: The fast-food model of tomorrow looks a lot like Checkers & Rally’s today.

A shrunk-down footprint. Checkers is just about 1,000 square feet. Multiple drive-thru lanes. The brand has long touted two. Closed kitchens and no dining rooms. Both are staples of Checkers.

It’s brought the legacy brand to a very different spot in a quick window. Allen left her CEO post at Boston Market and joined Checkers only three weeks before COVID erupted. But Checkers was a bit of a turnaround project before it was a pivot, respond-and-recover one.

Checkers ended 2019 with 890 locations (634 franchised) and total systemwide sales of $862 million. Average-unit volumes were $1.087 million. It produced flat to positive sales for eight of the past 10 years before 2020.

In September of last year, Moody's Investors Service downgraded Checkers on debt load obligations, noting, “it is highly unlikely that Checkers can improve it operating performance to a level that will generate the free cash flow necessary to service its debt once the PIK feature expires in June 2021.”

Checkers isn’t just clear on these fronts now—it also received a $20 million capital injection from Oak Hill Capital Partners IV in January. The company, which acquired Checkers for roughly $525 million in 2017—said early 2021 momentum reflected “strategic marketing and operations plans rolled out before the pandemic, which were enhanced by the demand for contactless drive thru and delivery experiences.” Clearly, it was enough to support additional support.

It’s also probably safe to say Checkers could have sat back and let 2021 trends work in its favor, and been plenty successful doing so. According to survey data from Sense360, 54 percent of consumers still believe the country is six-plus months away from “an end to restrictions” and a return to “normal daily activity.”

And as much as guests continue to express preference for drive thrus, restaurants need time (and capital) to shift infrastructure. McDonald’s CEO Chris Kempczinski said in January the brand welcomed 300 million additional cars through its lanes last year.

However, it already boasts more than 25,000 drive thrus globally, including nearly 95 percent of roughly 14,000 U.S. restaurants.

The National Restaurant Association’s 2021 State of the Industry Report said only 1–3 percent of brands tacked on permanent drive-thru service during the pandemic. Fast casuals led the way at 6 percent. Still, the notion remains a long-game journey for most.

So Checkers could likely keep grabbing share waiting for competitors to catch-up.

“I think you can always improve,” Allen says.

Being “pandemic proof” and “future ready” wasn’t exactly the same thing. Checkers, success in tow, decided to drop its own “restaurant of the future” model and go-forward strategy. The design builds on 2020’s learnings and leans into fresh opportunities, Allen says.

Across its system, Checkers, founded in 1985, had a lot of tired assets. It was in need of a refresh program before COVID, just so it could bring restaurants up to competitive averages. The pandemic refined some elements and paved the way for others. 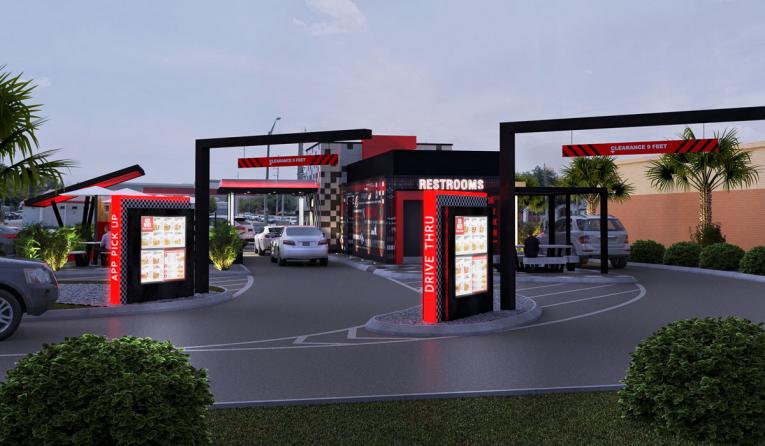 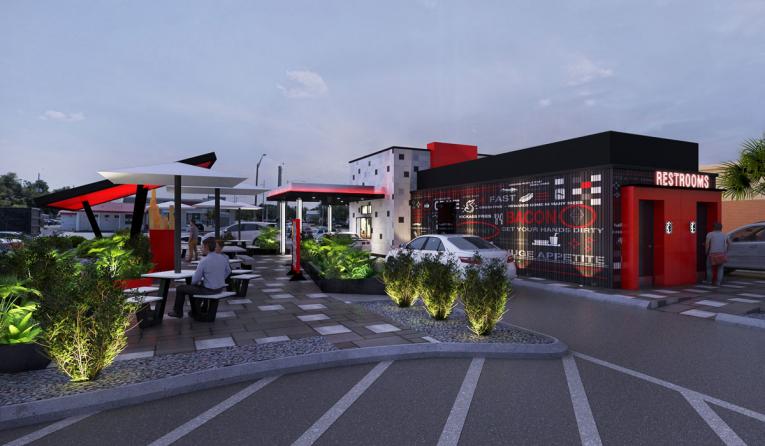 Lakeland, Florida will get the first fresh design.

This update will give Checkers a chance to cement one of its COVID success features. Since March, the chain converted two-thirds of corporate stores to includes a dedicated e-commerce lane. Many franchisees followed suit. This is a backbone element you see in a lot of prototypes revealed by category players, including McDonald’s, Burger King, Taco Bell, KFC, and Shake Shack.

This helped double delivery sales, Allen says. It also provided an added level of convenience for digital-centric customers as well as delivery drivers.

“And that worked extremely well for us,” she says. “So how do you make that product even better.”

It features better lighting leading up to ordering points and a QR code that can be scanned to pull up the menu. Checkers even reworked the seating area and bathrooms to make both more appealing. The first “restaurant of the future” location is scheduled for Lakeland, Florida, in summer, with six more on deck before 2022.

Checkers thought through its restaurant inside and out. It conducted a time-and-motion study on the placement of equipment to see if it could improve efficiencies.

It discovered employees were walking “significantly more miles in the week,” Allen says. About 1.5 miles each hour to be exact.

Checkers took the chance to optimize placement and remedy the issue. Also, to swap old equipment. For instance, it’s replacing flattops with clamshell grills in an effort to boost quality, consistency, and throughput. The new kitchens also include holding equipment that keeps products hotter with longer hold times, fry stations and grill positions with better capacity, and the removal of final cooking processes from most fried products.

The inside, or “engine,” is going to get a complete overhaul, Allen says. There are currently four Checkers with kitchen upgrades. Ten more are planned for the near-future.

Allen says tests have returned compelling results. Enough to spark franchisee interest, from existing and prospective parties. The branded added 40 new franchisees and 70 locations to the pipeline last year. It’s a 25 percent increase in the number of franchisees it started with in January 2020.

“We’ve got plenty of room to grow,” Allen says. “We’ve got three times whitespace just in our existing markets.” In other terms, Checkers believes it can triple across its footprint, market-to-market, without even thinking about breaking into new territory.

Checkers’ modular growth strategy should help, too, she adds. The company generally builds its restaurants off-site and pieces them together upon arrival. It’s a method that lowers costs and aids real estate flexibility. Chick-fil-A has even started to head down that road. “We also have a much smaller footprint. So that means we have access to drive-thru sites that many of our competitors don’t,” Allen says. “… It’s a very attractive proposition to franchisees. Particularly when the brand is showing such positive, organic growth.”

She says many operators are “itching” to put the new kitchen in. Others, naturally, want to see broader results.

But to date, Allen says, it’s making Checkers faster. The food is coming out better. Quality is easy to spot. “And that in turn is showing a sales increase,” she says. “At the same time, the employee experience of just learning this new equipment is so much more intuitive and easy to learn that they’re much happier.”

It will be easy to recognize it’s a Checkers or Rally’s. That hasn’t changed. Only enhanced, tech-ready, and completely reimagined within the four walls. 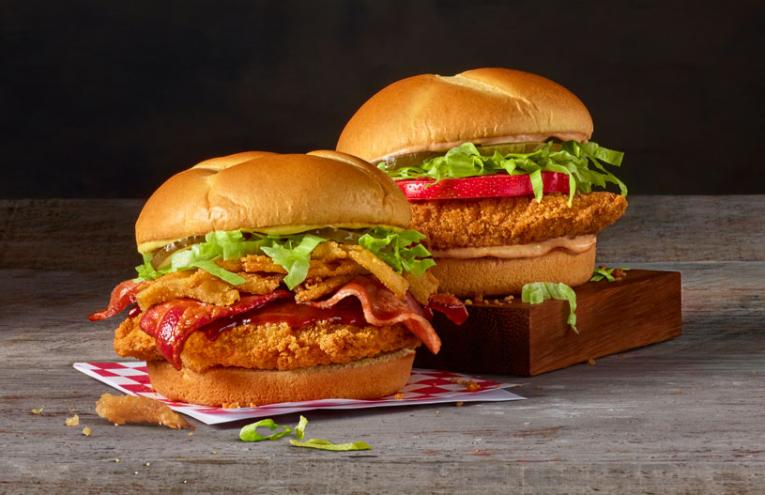 Checkers success in 2020 wasn’t restricted to physical advantages. The brand grappled in recent years with menu positioning. It was a value concept, no doubt. But was that enough to compete with quick-service competitors with far more scale? Especially when they could balance the barbell and direct transactions through digital incentives?

All of this was on Allen’s plate ahead of COVID. Checkers launched The Mother Cruncher chicken sandwich platform in June (it tested prior to coronavirus). It then refreshed its menu to make options clearer and shift attention from low-value offers to premium sandwiches, entrees, and full-priced combos. Value for those who need it, or seek it, but a focus on higher-ticket and more margin-friendly products for those willing to spend. Wendy’s is one brand that’s stressed this strategy in recent years as it pushed guests toward branded innovation over value LTOs. What it refers to as “one more visit, one more dollar.” Again, bring customers in with value. Have the products and messaging to trade them up.

Checkers saw success in doing so. Full-priced combos grew from 25 percent to 33 percent of mix. Checkers also unveiled “Smart Combo Bundles,” where the brand switched from 2 for $3 promotions to 2 for $10 combo meals.

About 50 percent of Checkers’ delivery guests during COVID were new to the brand, Allen says. A “significant proportion” are now repeat customers.

“So I hope they got the Checkers & Rally’s habit and after this will come to crave our seasoned fries and our great burger and chicken sandwiches. And that we’ll continue to see them using us more often,” she says.