Cousins Subs is Starting to Hit its Stride

The 100-store brand expects between 10 and 20 percent unit growth in the next few years.

Cousins Subs, a nearly 50-year-old brand, recently had its best March yet in terms of sales.

That record alone illustrates how the 100-unit chain is faring. But president Jason Westhoff has a few more figures at his fingertips to drive the point home. Traffic is up 15 percent year-to-date and increasing 80 percent on a two-year basis over the past two weeks. Same-store sales are growing 23 percent year-to-date and skyrocketing 66 percent on a two-year stack in the past two weeks.

Average check is down, but that’s a promising trend, Westhoff says. It means Cousins Subs is seeing more single-guest ordering, and that means more marketing opportunities toward individuals and their households.

“What we're trying to do is benchmark ourselves really against 2019,” Westhoff says. “And what we're seeing is basically we're recovering 100 percent of what we lost [in 2020] and we're getting probably another 10 percent on top of that.”

Cousins Subs was one of many restaurant companies built to withstand COVID conditions. Before the pandemic, about 15 percent of customers dined inside. So when restaurants nationwide closed their dining rooms, the brand’s drive-thru expanded exponentially and delivery doubled from about 10 to 20 percent. With dining rooms now open, 97 percent of orders are still coming via off-premises.

While the brand didn’t require changes to its product because of its grab-and-go nature, there were some notable pivots with technology. Cousins Subs sealed multi-million dollar investments to standardize technology across the system. The most significant benefit was rolling out curbside pickup within 72 hours.

Even pre-COVID, Cousins Subs made the necessary investments. Its loyalty program launched in November 2019, and the concept has gained 150,000 members through the pandemic.

“We certainly had the channels in place for sure, and we definitely stood to benefit by that,” Westhoff says.

Drive-thru stores, which make up roughly 35 percent of the system, saw sales grow 15 percent in 2020. There were three main keys to meeting increased volume. The first two are obvious—ensuring execution of procedures and staffing each shift appropriately. The third is a piece of technology that allows Cousin Subs to determine the location of cars spot-by-spot as they move through the line, starting with the spot behind the speaker box.

Cousin Subs is a big believer in the future of drive-thru. It dates back 10 years to when the chain initiated a rebranding strategy. 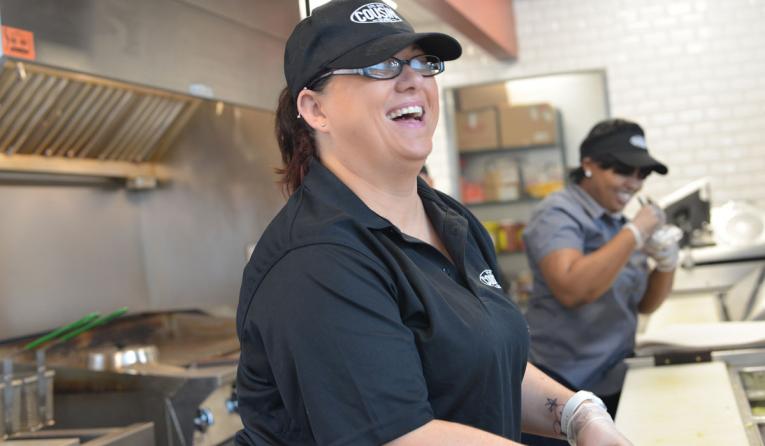 Cousins Subs plans to host job fairs to actively recruit employees in markets that are hardest to staff.

“As part of the rebranding, we were making concerted efforts to make sure we're putting ourselves in end caps or freestanding buildings with drive-thrus,” Westhoff says. “Moving forward, we won't do anything without a drive-thru anymore unless there's a real good reason to do it. Certainly, there are options where that does make sense.”

The million-dollar question, Westhoff says, is how to retain all those customers who tried Cousins Subs for the first time during the pandemic. He knows it’ll be a difficult task as more restaurants reopen and customers have more choices. Part of that is solved by offering a unique product. Cousins Subs’ menu depth is quite steep compared to its sandwich competitors; the brand sells cheesesteaks, cheese curds, French fries, milkshakes, cookies, soup, and chili.

Westhoff is also aware customers are attracted to speed and accuracy. In Cousins Subs’ case, accuracy has remained the same while speed of service has slowed. He attributes that to the increased drive-thru volume, but suggests migrating customers to other channels like curbside, third-party delivery, and ordering inside may help with the volume.

“I think that will alleviate some of it, but at the end of the day, it's not going to change our need to continue to focus on that because no matter how many guests we have coming through the drive-thru, we still need to achieve our service times,” Westhoff says. “With accuracy, we have a complex menu when it comes to just a number of toppings, and that's continually a challenge of ours. And we're working with our POS partner to try and make sure that our ticketing system within the stores prints the easiest possible ticket for our sandwich makers.”

The other issue hanging over the chain’s head—and basically everyone else in the industry—is a labor crisis. Popular chains like Taco Bell and Firehouse Subs are holding job fairs to hire thousands of workers. Others are increasing benefits, like Chipotle, which is enhancing its debt-free college program to even include a culinary school option, and Whataburger, a legacy brand that’s promoting general managers and paying them six-figure salaries.

The good news for Cousins Subs is that it’s retaining employees at a higher rate than it ever has, especially after giving workers two bonuses, the company said. Still though, Westhoff estimates Cousins Subs is about 10 percent sort of its desired workforce. The employment situation is materially different from store to store, depending on the community, mandates, and how parents feel about their kids going to work.

“At a lot of restaurants, we rely heavily on 16, 17,18-year-old kids who are in high school to work jobs,” Westhoff says. “And as the pandemic kicked in, the majority of the parents have their kids stay home for obvious reasons. Now they're starting to come back. We'll see with school ending here whether or not we're able to recapture a lot of those high school kids that we've had in the past because they’re key to our success in our busiest months during the summer.”

Cousins Subs will host job fairs to actively recruit in markets that are hardest to staff. Westhoff hasn’t seen any issues on a major level, but he acknowledges the occasional franchisee has a harder time keeping and hiring employees. He says it’s few and far between, but he knows that doesn’t make it any better.

Westhoff also suspects the labor pool will improve once the $300 weekly enhancement to unemployment insurance comes to an end. President Joe Biden’s $1.9 trillion American Rescue Plan extended the benefits through the beginning of September.

“What I would say for the most part is either you're in an area where unemployment is an issue or it's not, and you’re feeling the exact same effect as everybody else around you,” Westhoff says. “So if we're in a place where we're short-staffed, so are our competitors.” 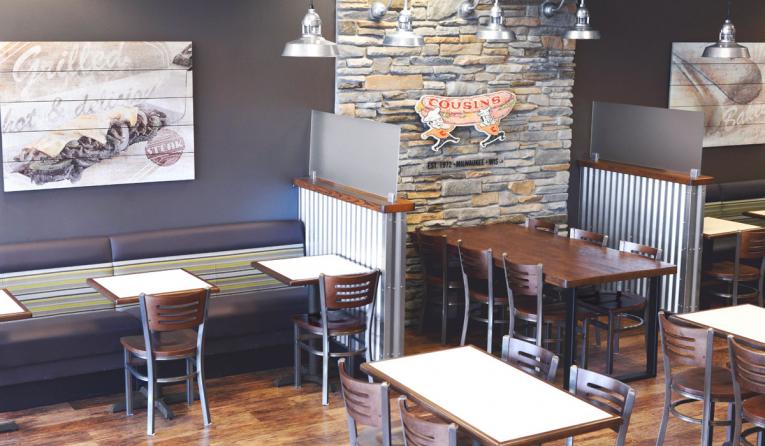 Cousins Subs’ road ahead envisions unit development, with an ongoing two-pronged strategy of acquiring or refranchising franchised locations. The chain started franchising about 25 years ago, so many of its franchisees are Baby Boomers who are on the tail end of owning stores. As a result, the brand purchased roughly 15 stores from franchisees in the past three years. The chain is buying out entire franchise markets; it acquired Sheboygan and Green Bay, Wisconsin, which are two of the five largest markets in the state. Westhoff says the chain is in the process of rebuilding those areas by closing old assets and constructing new, freestanding drive-thru assets.

Additionally, the chain is looking at corporate expansion outside Wisconsin. Based on the opportunities currently out there, the brand expects somewhere between 10 percent and 20 percent unit growth in the next three years.

“There's different things to consider,” Westhoff says. “Do you help augment what [the franchisees] are doing there, or do you continue to evolve around them. Are you looking at Indianapolis or Minneapolis, or areas around it? So I would say from a development standpoint, for us, the short-term thing is filling the pipeline with available growth opportunities. And so the challenge I've given the development team is to basically give us a pipeline that we can afford, and that way we can start making choices on what we do.”

Regarding new designs, Cousins Subs is working on version 2.0 of a prototype that debuted in 2018 and 2019. The main difference will be a smaller footprint. A standard store is roughly 2,400 square feet, but Cousins Subs is now looking at creating a box that’s between 1,800 and 2,000 square feet. The benefits are obvious—lower cost of entry and matching consumer trends.

More than 80 stores are in Wisconsin while the remainder are in Chicago and northern Indiana. Thirty-five percent of the locations are corporate. Personally, Westhoff has always considered 80/20 to be the ideal franchise/company-owned ratio because it lets a chain run solid tests and have a good understanding of what operations feel like. But as Cousins Subs progressed, it’s been more of a cash-flow decision. If a store becomes available and the company feels it can make more money owning it as opposed to franchising, then it makes sense to acquire it. With that said, Cousins Subs is cognizant of the risk associated with owning a restaurant as opposed to someone paying royalties.

The Cousins Subs executive says Chicago stores have been challenged because of Illinois’ restrictive nature, but as of late, they’re experiencing some of the highest volumes they’ve ever seen. In Wisconsin, suburban and rural areas have recovered faster than urban markets, but sales in those heavily populated are continuing to gain strength.

"I fully expect that the summer is going to be an extremely strong summer for us,” Westhoff says. “At the end of the day we feel very confident about where we are as a brand in our positioning and our relevance to our guests.”