The new food category was years in the making.

A consistent observation throughout the pandemic is that consumers have clung to comfort foods during an uncomfortable time. In the heart of the COVID-19 crisis, 63 percent of respondents in a Datassential study said they sought out pizza. Burgers and sandwiches were a distant second at 51 percent.

And for restaurant chains themselves, Domino’s, Papa John’s, and Pizza Hut have all witnessed sales surge off prior levels, in some cases to record highs. The trio reported same-store sales gains of 17.5 percent, 23.8 percent, and 5 percent, respectively, in their most recent quarters (Pizza Hut lags due to its heavier dine-in footprint).

Naturally, this has led some brands to consider joining the sizzling segment, either from a fresh entrance or product extension. But for Panera Bread, it’s actually a sentiment that began more than two years ago. The timing, however, has arguably never been better.

The 2,200-unit fast casual Wednesday rolled into the pizza sector—a new menu category for Panera—with its nationwide launch of “Flatbread Pizza.” Starting at $7.99, the lineup includes Cheese, Margherita, and Chipotle Chicken & Bacon flatbreads that start with a foundation of crispy dough and finishes on a pizza stone in-store before being topped with Panera’s pantry of clean ingredients.

A version of the product debuted summer 2019 when Panera began testing a dinner menu in Lexington, Kentucky. Yet Wednesday's launch features a more pandemic-ready option.

Panera’s head chef Claes Petersson, who arrived in June from Max Burgers in Stockholm, Sweden, fine-tuned this version for an off-premises world. And he was the ideal candidate to do so.

“We said, ‘OK, should we launch this now or should we take another look at it?’” Petersson says in an interview with QSR.

The answer was yes on both fronts, but Petersson realized Panera’s pizza needed fine-tuning to match the company’s pandemic trends as well as its future.

It’s no secret off-premises channels have spiked in light of quarantine behavior and lockdown mandates (just look at the success of the aforementioned pizza giants). For some time, it was the only outlet for restaurants to activate. It still is in many markets and could be again, evidenced by Illinois’ decision just this week to re-shut Chicago dining rooms.

Sara Burnett, Panera’s VP of wellness and food policy, says the chain’s off-premises mix of total sales has doubled, year-over-year, of late. Meanwhile, delivery sales are up 100 percent, or more, depending on the market.

Simply, pizza made a lot of sense for Panera today to introduce what it believes will be a significant delivery and carryout product that also carries food attachment potential. It’s cut into six pieces and can be enjoyed by one person. Or purchased in multiples, alongside some salads or soups, for instance, to create a sharable family meal. 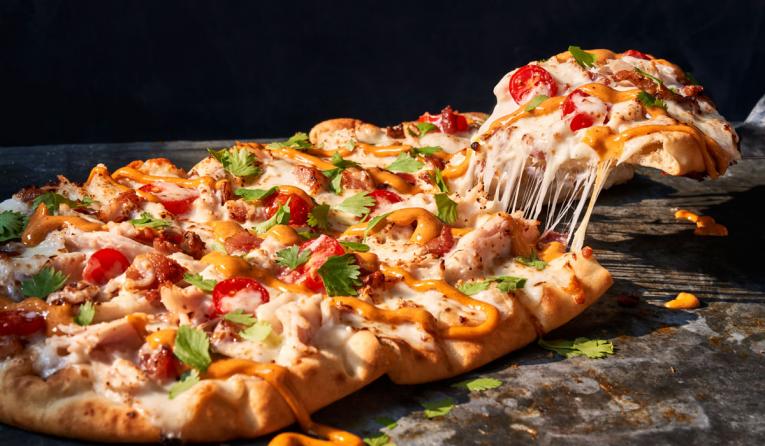 Before pizza became a realistic option, though, Petersson realized the product needed more dough weight so it could travel better. Panera added extra finely ground flour to double it. It also developed cardboard packaging that snuggly fits and includes directions to reheat if needed.

The process goes as deep as how it’s devised slice-by-slide. Petersson says there are crunchy slices on the outside and softer ones in the middle, which helps it maintain integrity over time.

Burnett adds Panera’s previous iteration was really as a dine-in, fresh-out-of-the oven product. “And not only did they do the culinary work to figure out how to make this travel well and make it great, delivered quality served 40 minutes later in off-premises, but our business dynamics have been changed since the beginning of the pandemic,” she says, referring to the hike in digital occasions.

Panera didn’t have to add any equipment or pantry ingredients to make pizza happen, either. Pizza stones were already in each restaurant. The only add was the dough, which sources from a supplier on its own recipe. Petersson says locations had to conduct about three weeks of training to get employees ready.

“The execution that I’ve seen looking at it, it’s really flawless,” he says. “I can’t wait to launch this [Wednesday] and really have it feeding America in new ways.”

Pizza represents Panera’s first new food category since grain bowls in September 2019. Like that launch, the company is supporting pizza with a 360-degree ad push Burnett called “one of our largest campaigns of the year.”

It will flood social and all traditional media. National TV next week. Petersson himself is doing some spots Wednesday. Expect to see “tons of out of home,” Burnett adds, as well as digital work and social influencers. Tactics to drive trial, she says. This includes leveraging Panera’s massive 40 million MyPanera loyalty base. They’ve received teases and primers in recent days about the coming launch.

“We think that MyPanera base and driving traffic to them is going to be a big opportunity because what we found in tests is that this has a really high repeat rate,” Burnett says. “So once people try it, they’re hooked, and they add it to their list of Panera favorites.”

Petersson says Panera’s separates from pizza competitors for the same reason the brand differentiates at this scale in the first place. Things like fresh Mozzarella, basil, and cilantro and the flatbread base. “The ingredients are a notch higher than many others out there, without being rude,” he says.

“Our guests choose Panera because they want to eat delicious food, that they can feel great about eating. Flatbread Pizza—done the Panera way—are the perfect offering for this moment and beyond,” Eduardo Luz, Panera’s chief brand and concept officer added in a statement.

Luz noted pizza could achieve its original aim as well—to open up the dinner daypart for Panera. Pre-COVID-19, more than 75 percent of the company’s business took place post-11 a.m. Yet dinner only accounted for roughly a quarter to a third (depending on the spot). And that was without a decided menu, which was the thinking behind the June 2019 test.

October data from Revenue Management Solutions showed year-over-year dinner traffic was slowing and consistently improving. At that point, it trended negative 8 percent versus prior-year levels. It’s remained in the negative 8–10 percent for most of summer.

So while dinner might not be an imminent focus, it’s something to consider down the line.

But in general, pizza is something Burnett believes will open up occasions regardless. It will overcome the veto vote and put Panera into the consideration set for some. Basically, if someone in the house wanted pizza, there are few brands that can stack other options around it like Panera.

On a personal note, Petersson says the launch is a dream fulfilled of sorts. He first visited a Panera in 2007 and tucked away a goal to eventually join the brand “and make stuff like this.”

“And now it’s happening,” he says. “… It means a lot to me. We’re a unique brand that can do unique things and now we have a fourth leg in our platform to lean on.”

“I would just say this pizza done Panera’s way,” Burnett chimes in. “And I think it’s absolutely unique because it’s freshly prepared, the clean ingredients you know and love from Panera. But they’re really artfully prepared by our chefs and bakers.”

Tackling Takeout (Off-Premises Solutions)
The Future of Drive Thru
Vendors to the Rescue
I Saw the Sign (Digital Signage)
Restaurant Equipment & Technology 2020
Breakfast Boom or Bust?
Pack It Up
Speciality Beverages

Inside the Plan to Build a Better Subway
When COVID-19 is Gone, What Will Become of Restaurant Delivery?
Nurturing the Vendor-Operator Relationship