It starts with listening to employees.

Chipotle has responded in multiple ways to recent social unrest.

Back in late August, Black Box Intelligence polled restaurant operators on the diversity and inclusion barriers facing America, and the industry. One in four kept it simple. They didn’t know where to start.

This same question faced Chipotle well before protests broke out in the wake of George Floyd’s May death. When CEO Brian Niccol left Taco Bell and joined Chipotle in March 2018, the fast casual set off on a transformation journey intended to reverse years of wary consumer sentiment. The 2015 food-safety crisis, which affected 14 states and led to a yearlong sales downturn, lingered. Every store-level incident triggered a fresh round of headlines and stock hits.

As late as February 2018, according to data from UBS analyst Dennis Geiger, customers trust in Chipotle was sliding. From a dive into more than 230,000 reviews, he observed a steady decline from a 3.80 mark through November 2017. There was a brief rebound in March 2016 but the line pushed downward after. He said 37 percent of the more than 1,600 customers polled online by UBS frequented Chipotle less often than they used due to food-safety concerns.

And Baird pushed Chipotle's price target Tuesday up to $1,600, citing its ability to attract “new customers/occasions through the digital channel during the pandemic, the company appears well positioned to show meaningful increases in average-unit volumes and margins as in-restaurant traffic patterns rebound.”

Chief diversity, inclusion, and people officer Marissa Andrada was one of the new-guard hires Niccol brought on in April 2018. She arrived from Kate Spade & Company after holding several senior level positions in human resources at Starbucks.

Andrada says part of Chipotle’s resurgence rooted in redefining company values. It was, in a lot of ways, deciding “where to start.”

“You take a bunch of different people with different backgrounds, various races, and you bring them all together and become an environment that is about growth,” she says. “To me, that is the definition of diversity.”

Andrada’s title expanded toward the end of June (it was chief people officer before). She says the decision came as Chipotle adjusted to a changing social climate. “I got really excited when we decided, let’s really recognize what this foundational work has been over the last two-plus years in our transformation, and just declare it,” she says.

Chipotle positions this as “authenticity lives here. Our food is real and so are we.”

And there’s a lot standing it up. According to a survey from Comparably released in July, Niccol ranked 19th among the country’s best CEOs for diversity in large companies. Chipotle was the only restaurant in the top 25—a list that included Microsoft (No. 1), Google (No. 3), and Apple (No. 8).

One visible effort, shared publicly August 6, was Chipotle’s “real change feature” in its app and website that allowed guests to round-up their change to the next highest dollar amount to support the Thurgood Marshall College Fund.

Chipotle also partnered with the fund to deploy its Talent Sourcing Program to richen the chain’s diversity platform. This was a move intended to “put our words into action,” Andrada says. Chipotle launched debt-free degrees last year with 100 percent of tuition costs covered upfront to join its existing tuition reimbursement program. 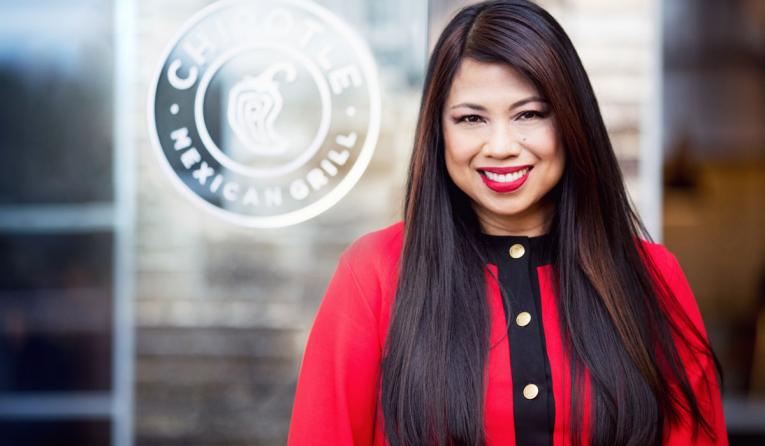 “It’s one thing on the outside to say Black lives matter. But what does that really mean, personally for our employees?” says Chipotle's Marissa Andrada.

Within weeks, the round-up technology resulted in more than 1.4 million guests contributing, on average, 45 cents with each order. It generated close to $1 million for the first spotlight organization—the National Urban League. Additionally, it followed a June pledge from Chipotle of $1 million in support of organizations advocating against systemic racism, which started with a $500,000 commitment to the National Urban League.

Other efforts have been wide-ranging. Chipotle introduced a fresh multicultural employee resource group called UNIFIED (United Network of Influencers Furthering Inclusion and Ethnic Diversity) to foster change from within. It’s provided access to voter registration and education, and enabled employees to identify organizations they want to spotlight in the aforementioned app donations.

The company then allocated $250,000 to community improvement grants that the resource group will coordinate for restaurant GMs to facilitate at a local level.

Chipotle started to pilot a mentorship program to find a diverse group of “high-potential development” to advance through the company.

Some other points: A $50,000 donation, as part of Chipotle’s Pride program to The Center for Black Equity.

Pausing all paid advertising on Facebook and Instagram while the company “better understands the changes Facebook is making in regard to harmful contest posted to their platform.”

Matching the prize pool for the Chipotle Challenger Series II esports competition by donating $25,000 to the National Urban League.

Contributing more than $500,000 to support the next generation of farmers through the National Young Farmers Coalition. Recently, Chipotle awarded 50 diverse, young farmers $5,000 grants to begin or grow their businesses, 78 percent of which represent minorities in the industry.

For Andrada, two other, ongoing initiatives have left an impact on the company’s internal organization: Chipotle’s listening sessions, and “The Real Scoop with Marissa,” which are virtual multicultural education sessions featuring conversation with Black influencers.

On the first, Chipotle’s executive leadership tunes in, typically on Mondays, and just listens to employees air their concerns about real-life issues.

“To me, it’s about how do we really get a perspective from a personal standpoint where employees are coming from,” Andrada says. “It’s one thing on the outside to say Black lives matter. But what does that really mean, personally for our employees?”

Andrada starts by introducing herself and laying some ground rules. She asks simple questions, like, “What are the three words that describe how you’re feeling?” or “What is the one thing you want the executive leadership to know,” and “What ideas do you have that we should be doing, what should we be doing to create and cultivate a better world?”

And then Chipotle’s brass just listens. 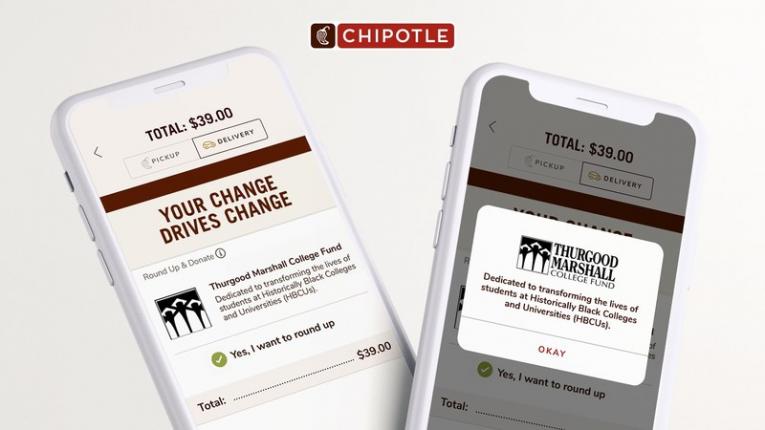 Chipotle launched a "real change feature" in its app to help customers give back.

Andrada says notes from sessions informed all of the initiatives internally and externally (as listed before) Chipotle decided to go forward with.

She shares an anecdote from a Black GM who told Chipotle’s team he felt safe inside the restaurant. Outside was a different story.

Niccol broke protocol that day and unmuted, asking if there was anything Chipotle could do to help.

“He said, ‘no, this isn’t about what you can do Chipotle. This is about society,’” Andrada recalls.

However, this back-and-forth left an imprint on the employee, she says. He returned weeks later to say the outward concern, from the top, made him feel invested in the company. And he shared the story with friends and family, and crew-level workers. “I looked at that and said, that is who we are as a company,” Andrada says.

“The simple things that you do, it’s empathy, it’s sympathy, it’s really seeing and hearing people. That’s what I mean when I say that. It’s powerful,” she adds.

“It is painfully clear to me that we have work to do as Americans to ensure Black lives are valued and we are standing in solidarity with the Black community,” Niccol said earlier in a statement. “The racial and social injustice is unacceptable and we want to do our part to create an equal society. “

Chipotle shared in July a goal to hire as many as 10,000 employees in the coming months to support growth through and after COVID-19. Its 'We Are Open. We are Growing. We Are Hiring' campaign kicked off in May and resulted in about 8,000 hires to-date, the company said. Since the beginning of the year, Chipotle received close to 700,000 applications nationwide.

So as Chipotle recruits and works on retention, what it stands for has fast become as critical as what it’s selling. Especially considering a suddenly wide talent pool that’s debating whether or not to return to restaurants. Balancing their safety, prospects, and personal beliefs with the options available.

And that’s where the employee perspective comes into focus, Andrada says.

The chain’s listening sessions differ from Andrada’s “Real Scoop” in that the first includes all executives, all ears. Anyone who wants to come signs up and joins.

The Real Scoop, though, is a conversation with Andrada where Chipotle caps to 100 or so people on Zoom. She’s brought in speakers like N.W.A. founding member Arabian Prince, musician Daryl Davis, famous for convincing 200 Ku Klux Klansman to leave the group, and former basketball player and commentator Clark Kellogg.

They’ve taken place roughly every other week, starting in July. Employees introduce themselves and then open up for a Q&A with the “Real Scooper.” After about an hour, everyone breaks out into 10–15 minute sessions to connect with peers.

“When you come from a place of telling your journey or sharing commonalities, that’s when I use the word ‘platform.’ We have a common platform,” Andrada says.

In the end, Andrada says, it comes down to shrinking Chipotle to a level everybody connects with. “It’s not like this company doing big company things. It’s really something where our employees—amplified by their voices—help make change happen through their eyes.”

“I am a big believer,” she adds, “if you bring the best out of everybody and give them the space to do that, you can be the growth in this company. That to me, you can use the words ‘diverse, equity, and inclusion,’ but that’s what it’s all about.”