Noodles & Company is seeing impressive retention from employees who use its perks.

Noodles & Company’s comeback doesn’t discard the playbook. There are complex components, from a massive menuboard initiative to one of the most successful product launches in recent fast-casual history, but the foundation sparks a familiar tale. And that’s why it’s lasted well beyond the burst stage.

Noodles & Company’s turnaround has sustained, chief executive Dave Boennighausen says, as opposed to just bouncing off the bottom of its own 2017 plummet, because the brand didn’t need to reinvent itself. “We’ve just had to leverage what are already inherent strengths within it,” he says.

And Boennighausen would know better than most. He’s been with the company 15-plus years, taking over as Noodles & Company’s permanent CEO June 2017, a summer after Kevin Reedy stepped down. Boennighausen held the interim role from the previous summer.

“It’s much easier to turn around when you’re saying let’s get rid of the ancillary things, like sandwiches, and let’s just focus on the things we do well,” he says.

Noodles & Company’s road back isn’t a mirage, either. In the second quarter of fiscal 2019, announced August 6, the brand turned in same-store sales growth of 4.8 percent at company-run units, year-over-year, which marked five straight periods of positive gains (395 of Noodles & Company’s 457 restaurants are corporate). More impressively, though, it built a two-year stack of 9.8 percent—the chain’s best performance in six years.

And it isn’t that long ago that Noodles & Company’s strategy was an urgent, comeback-worded call to action. The chain swung a hefty net loss of $37.5 million in fiscal 2017. It reported six consecutive quarters of year-over-year declines (at locations open at least a year) heading into the winter of 2017. The brand then shuttered 55 restaurants in Q1 2017, funded in part by two capital raises—a period where revenue dropped 2.4 percent and net loss totaled $26.8 million.

Emerging from that crater with a positive 2018—which Noodles & Company notably accomplished—was one thing. It’s the equivalent of standing upright after being bed-ridden for a while. Progress, but you wouldn’t exactly call it walking.

Noodles & Company’s 2019 performance to date is something else entirely.

Let’s trace it back, with same-store sales at company units:

Admittedly, there were a lot of things going wrong during Noodles & Company’s slide. Underperforming stores dragged the base. There were real estate missteps. Menu misfires. Sandwiches and flatbreads come to mind. They added complexity, created operational fat, and didn’t generate guest value.

Yet the issue Boennighausen always returns to is another brand DNA staple: People. Noodles & Company fronted turnover north of 200 percent in its restaurants when Boennighausen grabbed the reins. Fifty percent at the manager level. It was nearly impossible to reengage the brand’s customer base and impart real changes with employees flipping over two-fold each calendar year. If Noodles & Company’s staff wasn’t sticking around long enough to buy in, how could it convince guests to do so? 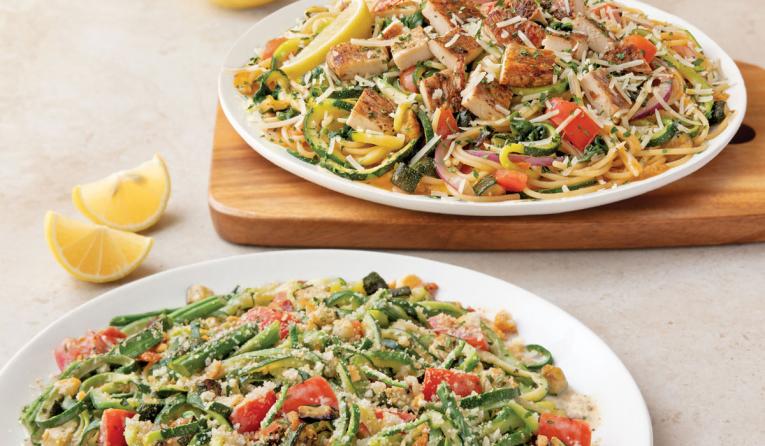 Boennighausen says Noodles & Company’s has made significant strides in the past two years. It realized that its labor goals weren’t all that different from its Zoodle directives, in terms of the audience. “What we have embraced,” Boennighausen says, “similar to our guest, which leans a bit Generation Z and millennial, so does our team member. So, the benefits that we’ve introduced over the last couple of years … we’ve been much more millennial friendly and Generation Z friendly with those types of benefits.”

Here’s a vivid example. In September 2018, Noodles & Company bolstered its Life@Noodles platform with what it termed a “groundbreaking” maternity leave program. Effective January 1 of this year, qualifying expecting and postpartum mothers were given the option to phase out and in to their maternity leave, allowing them to work an 80 percent schedule for the four weeks before and after maternity leave, while receiving 100 percent pay.

According to the Centers for Disease Control and Prevention, one in nine women experience postpartum depression after giving birth in addition to sleep deprivation and difficulty managing breastfeeding. Noodles & Company’s aim was to provide a work-life balance that eased the transition, and took into account an issue many competitors ignored.

What this shows, Boennighausen adds, is something employers across all industries have noticed in today’s gig-driven and exceedingly-tight labor environment—there is simply more to the equation than money. Workplace happiness is one of the most important factors in today’s retention quest.

In a survey of about 2,000 restaurant professionals from 7shifts, a scheduling software platform, nearly 40 percent of respondents said they would like “public kudos” from management. More than 35 percent said the amount of recognition they were receiving was inadequate. Those planning to quit (at-risk workers) rated recognition from management a 3.5.

This is another concept Noodles & Company went directly after. Each restaurant now has a consistent recognition board, Boennighausen says. The company invested in awards for employees. Noodles & Company even has a “Super Noodler” honor, which is peer-nominated and given out monthly. “A lot of qualitative work around showing team members that we care about their future and that we care about their experience with us,” he says.

Noodles & Company instituted “people-time meetings,” where managers spend 10–15 minutes once a month with employees and clue them in. It also opens the door for communication and allows workers to make suggestions and feel connected.

“The industry for so long, even when I grew up, working in restaurants was something that had a pretty bad stigma attached to it. That needs to change." — Dave Boennighausen, Noodles & Company CEO.

The brand is testing hourly team bonuses as well, Boennighausen says, and leveraging technology to remove some menial tasks from GM's plates. GM training classes are now all iPad and tablet based and Noodles & Company introduced a labor management system in Q1 that allows employees to share schedules, swap shifts, and stay in touch. It’s the classic situation where a worker can’t make it last minute and the manager scrambles to fill the spot, many times left covering the role themselves. With the mobile changes, an employee can ask the group if anybody’s available and if someone is capable of taking that shift, they see the alert. The manager approves the swap and gets back to other duties.

Even with all of the changes, Boennighausen says, Noodles & Company is just scratching the surface of its employee-value proposition. In addition to the maternity policy, the brand provides adoption assistance of up to $10,000, flexible time off for corporate employees (there is no set number of days employees at its central support office are able to take off per year, allowing them to better control their work/life balance and take off the time they need rather than save it for illness or emergency), student loan debt assistance (GMs get a contribution of $1,000 per year), and competitive standard benefits, such as dental and vision coverage, employee assistant programs, and 401(k) retirement plans. Assistant general managers and above are also eligible for Noodles & Company's medical and life insurance and disability coverage offerings.

All of these initiatives are critical, Boennighausen says, to achieve everything else Noodles & Company wants to accomplish. And it’s a widespread issue he thinks affects the future of restaurants in general. 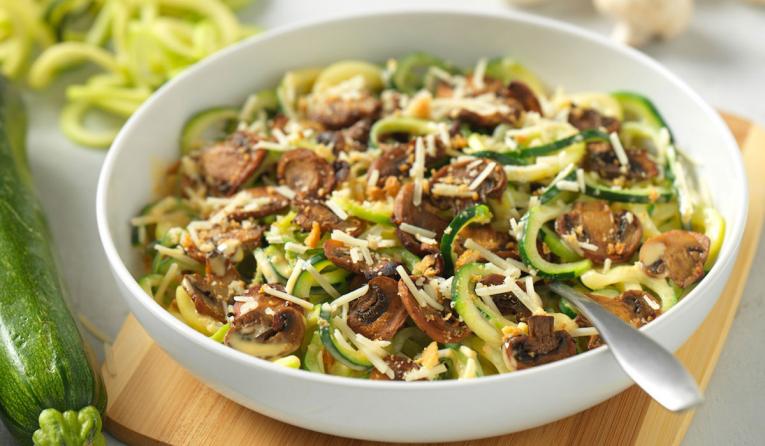 Noodles & Company has plenty of room for product innovation around its plant-based lineup.

“The industry for so long, even when I grew up, working in restaurants was something that had a pretty bad stigma attached to it. That needs to change," he says. "And the way that changes is really through the general manager. And our general managers, one thing that I try to stress, is for all those high schoolers that work for us, aside from their parents, maybe a teacher, but probably not, there’s nobody in that person’s life having more of an influence on how they form their work ethic, their belief system around serving other people [than the GM]. Once you get GMs to really buy into that and recognize that, the retention seems to follow because those team members feel much more cared for."

The future of the Zoodle, technology, and more

In Q2, off-premises sales represented more than half of Noodles & Company’s total sales. It jumped 500 basis points, year-over-year to 56 percent. Growth was led by digital ordering, which, inclusive of delivery, lifted 47 percent versus 2018 and represented 22 percent of total sales.

In September, the brand plans to launch a cauliflower-infused noodle to give customers a plant-based, healthier-for-you option that might not be as extreme as the zucchini noodles. It has a similar mouth feel to regular pasta and more aligned with the “I can’t tell the difference” mantra than something that surprises guests.

Concurrent with the introduction, Noodles & Company will relaunch its entire digital platform, including its app, online ordering experience, and rewards program. The goal is to reduce friction, particularly around customers’ ability to customize meals. The rewards program will move from a “surprise and delight” setup to one that provides a points and tier system to better reward guests and allow for more personalized customer engagement.

This is a significant shift, Boennighausen says. Recently he received an email with a subject line of “rewards.” The customer’s complaint: they kept spending and kept receiving deals for zucchini noodles, which they were allergic to. “So, it’s a waste,” Boennighausen says. “That’s the type of thing that we want to get away from, where we have the same message to Danny to Danielle to Dave. We need to be much more customized based on people’s purchase behavior and what they’re showing that they’re interested in about our brand.”

In time, Boennighausen believes, Noodles & Company’s healthier-for-you options could eclipse the mix of its most popular item—mac and cheese—which currently totals 20 percent or so. This is one area the menuboard makeover, which spread systemwide in early May, was important.

Boennighausen says about 7 percent of guests on any given day are first-time Noodles & Company customers. So, having menuboards that help them navigate more quickly and guide them toward the right dishes, the ones with high food scores, repurchase intent, and are favorable from a margins and operations perspective, was helpful. The new additions—Signature Flavors and Make It a Meal—positively impact average check, too. In Q2, overall restaurant margins improved 160 basis points to 17.1 percent, their highest level since Q2 2015.

Cost of goods sold as a percentage of restaurant sales also decreased 110 basis points to 25.6 percent, which was a reflection of the change, as well as pricing initiatives.

And there’s room to grow. Boennighausen says only 20 percent of its current rewards members have even tried zucchini in a dish yet.

“So, we know there’s really long runway,” he says. “We’re really only just getting started.