The chain's marketing exec says there could be major implications.

Web Exclusives | April 29, 2022 | Trevor Griner
The Halal Guys
A rendering of the NFT offered by The Halal Guys.

In honor of The Halal Guys opening store No. 100, the brand is offering loyal customers who have dined with the restaurant 100 times or more entry into the Century Club, which includes an exclusive NFT of the original food cart.

The program acknowledges longtime guests with various perks and exclusive gifts. Other benefits include swag, a Century Club coin, and a 3D printed cart.

A non-fungible token (NFT) is a unique token stored on a blockchain, which is a type of digital ledger. NFTs can be sold and traded by whoever owns the token on various digital marketplaces. NFTs are non-interchangeable units of data—making them easily identifiable—and are usually associated with photos, videos, and audio. Holding an NFT gives the owner exclusive access to these files, which drives interest due to the limited number released for any one collection. Usually, the more exclusive the NFT, the higher it will cost.

The popularity of NFTs has skyrocketed in the last year-plus, and has attracted the attention of major brands, like Papa Johns and McDonald’s, and smaller chains, like Chick’nCone.

“We felt the NFT offered an interesting juxtaposition of the same kind of old school carts we’re so well known for with a modern 2022 twist on it,” says Andrew Eck, The Halal Guys VP of marketing. “I’ve been paying attention to what some other concepts within this space of the industry have been doing … I thought it could be a cool way to bring The Halal Guys into that world as well.”

READ MORE: Should Restaurants Buy Into the Crypto Craze?

Eck believes the recent uptick in interest is a prime opportunity to blend digital tokens into the brand’s marketing strategy. With this being the fast casual's first exploration into the metaverse, Eck is keeping an eye on the campaign's effectiveness.

“I very much believe in the world of crypto, NFTs, and the use of blockchain technology,” he says. “I think it’s something that will be a part of our lives for the foreseeable future.”

Eck says The Halal Guys is approaching promotion of the Century Club in the same way American Express does with its black card, opting for an exclusive angle rather than blasting promotions across various channels. The hope is that members will promote their inclusion on private social media profiles and through word of mouth, as opposed to The Halal Guys dropping marketing dollars.

Although he believes crypto and the digital world will play a large role in the quick-service space in the coming years, Eck is quick to admit that meshing the two worlds is still in its fledgling stages. He says several technological advancements—such as making the innovation more accessible and less complicated—will have to be introduced before things like NFTs are accepted by the masses. 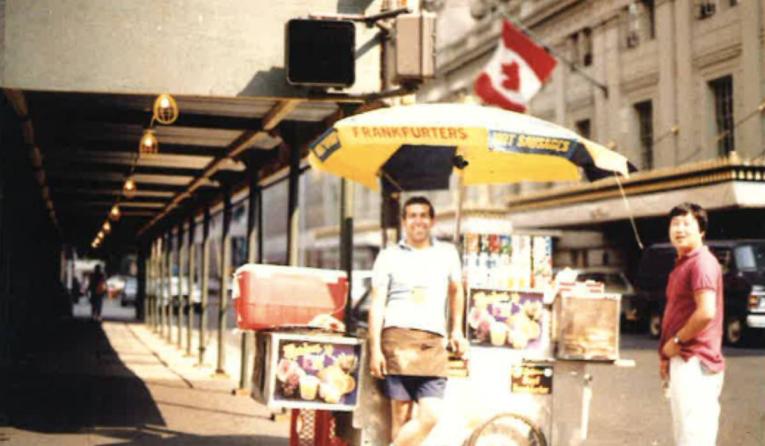 The Halal Guys' original food cart, which serves as inspiration for the NFT.

Currently, it can take several weeks to register an account on crypto platforms used to purchase, sell, and trade NFTs. Eck says this waiting period is a major hurdle for those wanting to break into the space, and that’s part of the reason why The Halal Guys initial venture into the metaverse is mostly experimental.

“It’s going to be a unique challenge,” he says of blending the restaurant world with the metaverse. “This initial introduction of the NFT will be exploratory to help us better understand how our guests, how are fans received the NFT. But I think the possibilities in the future are essentially endless. As more and more people find and use this technology and have an interest in it, it will become more accessible. I think the utility and value to us as marketers is only going to increase.”

Eck sees NFTs acting as keys to unlock access to special offerings from brands, like secret menu items. He adds there is room for owners to become ambassadors and use  NFTs to promote brands on social media.

Perhaps most importantly, Eck feels NFTs reach a younger demographic, and that is always a major goal of marketing campaigns. The executive says promoting a “cool factor” goes a long way when trying to engage millennial and Gen Z consumers.

“It keeps people talking about the concept and keeps you top of mind where an immediate competitor hasn’t stepped into the space,” he says. “I could definitely see [NFTs] as being a competitive advantage for a brand that’s competing with other concepts that have a younger consumer base.”

In the immediate future, Eck says NFTs will continue to be used as marketing tools and not forms of payment because it would require a major overhaul of accounting systems. However, younger, more tech-centric brands might attempt such a feat.

“I think some of the more progressive, forward thinking concepts will likely find unique ways to innovate and become more involved in that world,” he says. “However, I don’t see there being a ton of acceptance in the next two to three years outside of the marketing side.”

Still, Eck and the team at The Halal Guys have their ears to the (meta)ground and are monitoring the space to make sure they don’t miss out on the next digital craze.

“Members on my team have a pretty strong interest in the space,” he says. “There has been a fair amount of due diligence on that side to better understand it … I wouldn’t say that we’re far enough down the path just yet, but I would say everything is imminent.”