After rolling out text message ordering in 2019, the brand's AI systems have earned a combined $100 million.

Aaron Nilsson, chief information officer for Jet’s Pizza, arrived at the brand in 2019 as it embarked on a digital transformation.

The first couple of months were spent assessing vendors and opportunities. Jet’s Pizza proceeded to redesign its website and app with hi-resolution photography and videos to make the product appear worthy of its decades-lasting reputation.

The digital exploration led Jet’s Pizza to the doorstep of artificial intelligence, a business that’s now earned $100 million since it was first implemented in the latter half of 2019.

It began with Jet’s Pizza partnering with OrderAI to create a functional text ordering system. Nilsson explains that it’s as simple as saying “I’d really like one of those super great pizzas and a Pepsi and how about a Diet Coke?” The technology is smart enough to ignore those other words and hear ones that matter, like swapping Diet Coke for another Pepsi since the restaurant doesn’t carry those products. Because AI does thinking for the customer, transactions happen fairly quickly, Nilsson says. He recounts a story when he asked his 12-year-old daughter about ordering pizza. From when she picked up her phone to the order being completed, all it took was 12 seconds. And that’s with a couple of pizzas, sides, and drinks in the order.

The AI remembers customers too. For instance, if someone orders at 5 p.m. on Friday, has it delivered to a certain address, and uses a certain card for payment, the computer will take all that data and send a reminder text the following week. After that, it’s just a matter of the customer responding with “Yes,” to receive the meal again. Nilsson calls it a “magic message.” Customers don’t have to wait for this inbound text either. They can reply with “repizza” or “last order” to receive what they picked up before.

“Even though we simplified it down to typing in actually what you want, now we just remember what you want and say, 'Do you want to do it again?” Nilsson says. “This whole thing that's fairly complex, all you got do to get pizza into your house, that’s hyper-relevant, hyperlocal to you, is just say basically Y. E. S. Yes. Yes I would like that. It’s really nice, and we get a good overall take rate on that.”

Text ordering capabilities started in fall 2019 and officially launched the following year.  In 2021, text to order generated $31.36 million in sales. On average, units with this technology saw a 24 percent increase in sales last year. In January, Jet’s Pizza announced that more than 2 million text orders had been placed. The innovation is now in 85 percent of the roughly 400-unit footprint.

“I will say even just personally that's the way I love ordering is text message,” Nilsson says. … “I am ordering more frequently because of the simplicity of it. … I think a lot of the websites that we're looking at and use with radio buttons and check boxes and photos are just basically an analog of like Sears and Roebuck catalogs from like the 1950s, which we're all familiar with. It’s just the page metaphor transitioned to the screen."

The company’s most innovative AI feature is pro-ordering. When customers select this option, they’re taken to a website with a text box surrounded by a menu. A guest can type in what they want and the system automatically tabulates the order. Within this interface, a consumer can add loyalty points, and the AI will calculate the best coupon offer for your order, if one is relevant.

This technology is currently in about 20 shops.

“There's nothing like that in the marketplace,” Nilsson says. “It's just next-level good from a technology perspective, which is in my opinion similar to the taste for pizza—it's really, really good.” 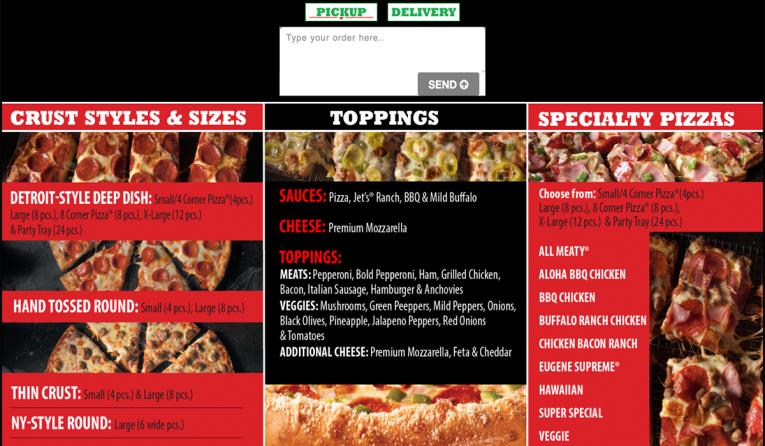 “I think right now there's a bunch of restaurants out there that are scared to spend the money and time and energy to hire the right people to do things with AI," says Aaron Nilsson, chief information officer for Jet's Pizza. "And I'm really proud of our organization for having leaned in."

Jet’s Pizza has also experimented with phone AI systems, a resource implemented by some of the largest players in the space. A robotic voice walks customers through prompts and translates their order using the same AI engine as text ordering. Jet’s Pizza started pushing phone ordering in summer 2021 and then conducted a pilot with about 70 franchisees. Then in March, the technology was “mathematically blessed,” Nilsson says, and it's now used in about 70 percent of restaurants.

An extension of the AI technology is that it can handle large group and party orders. If a consumer is using text ordering or pro-ordering, they can simply type “party for 28,” and the system will respond with the proper number of pizzas, sides, and drinks. Nilsson says someone could pay for $500 worth of food meant for 50 people in just 15 seconds. The engine is smart enough to distinguish choices, like “kids party" for children portions, “pizza party” if one doesn’t want sides, or "loaded party” for someone that wants the best of everything.

Nilsson doesn’t have data points to prove what demographics use the AI technology, but anecdotally, he’s heard about all ages using it, even from his own family.

“There's not a limitation for this relatively cool and advanced piece of artificial intelligence technology for a 70-year-old person like my mom to order stuff,” Nilsson says. “I think it is ubiquitously enjoyable. My 70-year-old mom and my 12-year-old daughter both used the technology and have no complaints.”

The executive credits Jet’s Pizza founder John Jetts—who has spent almost 45 years maintaining tradition—for allowing the tech initiatives to move forward. Nilsson says a lot of trust is involved when leaning into this type of innovation, but the rewards are plenty. He views it as a “really cool turning point” in the age-old story of restaurants.

“We're very excited about the future because we've done the work that gets our culture ready to innovate,” Nilsson says. “I think right now there's a bunch of restaurants out there that are scared to spend the money and time and energy to hire the right people to do things with AI. And I'm really proud of our organization for having leaned in. And the financial benefits are reaping every single day.”

“We're getting a ton of benefit out of this thing,” he adds. “There's companies out there that are just optimizing and are too scared to jump into new tech. And as a competitor of theirs, I say thanks. Stay out because in here, it's nice and warm and comfortable with a bunch of really good deals because of cool technology."

FDA Food Code Update, and its Impact on Quick Service
The Future of Fast Casual in 2023 and Beyond
6 Myths About the Soon-to-Expire Employee Retention Tax Credit

Should Restaurants Still Believe in Ghost Kitchens?
Restaurant Reader Mailbag: Trends That Will Define the Year Ahead
3 Tips from East Coast Wings Founder on Surviving in 2023