Digital sales increased from 18.25 percent pre-pandemic to 40 percent by the end of Q2.

When Mountain Mike’s Pizza was first acquired by franchise industry leaders Chris Britt and Ed St. Geme in 2017, the business already had a lot of staying power. It had operated for nearly 40 years, but was not yet entirely secure in its role in the digital revolution necessary to thrive as a 21st century business.

Since the acquisition, nothing could be less true. Mountain Mike’s now prides itself on embracing different platforms, like third-party delivery, in making the product more accessible to consumers. Digital sales mixed 18.25 percent prior to COVID, but grew to 40 percent by the end of the second quarter. To further boost online sales, the brand rolled out a new mobile loyalty app in May that creates personalized offers for individual customers.

“When you have 25 percent of your business as dine-in and you lose it, you don't really know exactly what's going to happen,” Britt says. “What we saw was just a tremendous embracing of our pizza.”

The current Mountain Mike’s digital persona is a far cry from what it used to be. Even three years ago, franchisees were reluctant to utilize third-party delivery services.

Mountain Mike’s, which has more than 240 stores on the West Coast, is projecting north of $250 million in total sales this year, up from a record-breaking $206 million in 2020. Q1 was the best period in the chain’s history, with same-store sales soaring 23.4 percent compared to last year. In the second quarter, comps lifted 16.4 percent and total system sales grew 25.9 percent year-over-year, fueled by a host of marketing initiatives, such as sponsoring the San Francisco 49ers draft party, become the team’s official pizza, and the return of the heart-shaped Mother’s Day Pizza.

“What's driving that is all of these levers that we put in place to support our fabulous franchisees,” he says. “It starts with just making the product more accessible.”

Britt says that for both Mountain Mike’s and sister chain Juice It Up!, the acquisition introduced new store designs, which delivered consistent, fresh looks that are more conducive to consumer demand for efficient, convenient pizza and juice ready for carryout service with skip-the-line ordering.

The support is vital as expansion plans continue. In the 10 years before the acquisition, Mountain Mike’s grew in the single digits each year. It will open 25 stores in 2021 in multiple states after debuting between 13–18 each year since 2017. The additional units widen a growing presence in California, Oregon, Utah, and Nevada, with new development arrangements in Texas, Colorado, and Idaho. Soon, the brand will reach 250 units. 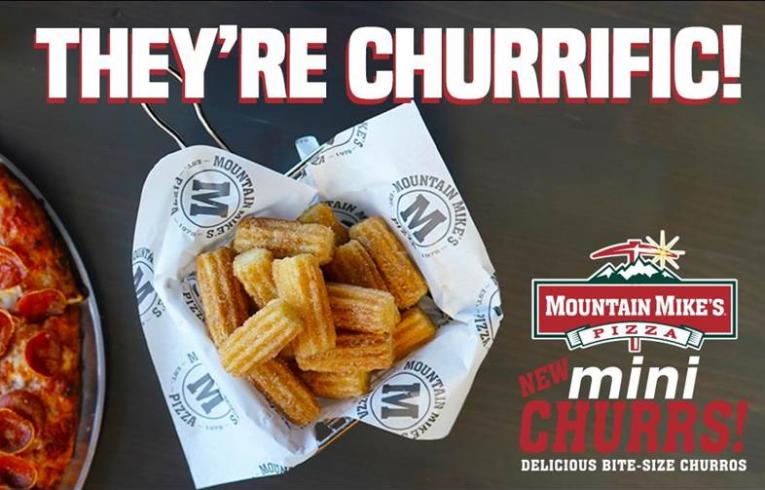 This spring, the brand expanded its dessert menu with Mini Churrs, which bolstered the dessert category by more than 100 percent.

“We now have a much more compelling franchise opportunity there than we did when we acquired the brand, as well,” Mountain Mike's co-owner Chris Britt says. “Our job is to support our franchisees and provide really great opportunities for new folks to come into the system.”

The 80-unit Juice It Up! is following a similar surge, with four units expected to open by the end of the year and at least 13 in development for 2022. The company is expanding in California, Oregon, Texas, New Mexico, and new markets in Arizona. Once without an online ordering program, Juice It Up!’s digital channel now represent 20 percent of sales, fueled by mobile ordering through the loyalty program and third-party delivery.

Unit count is projected to grow between 10–15 percent per year for both Juice It Up! and Mountain Mike’s.

With off-premises sales growing, Mountain Mike’s has been more open to locations with closer to 2,000 square feet. Britt says the company will never be strictly delivery and takeout, but he is confident it's capable of providing the same guest experience with a slightly smaller footprint. The chain will also potentially explore drive-thrus within the next year or two.

Juice It Up! also streamlined its space, moving into 800- to 1,000-square-foot properties and prioritizing efficient carryout and delivery. After the switch, the brand saw same-store sales lift 40 percent.

“We still want to have a place for people to gather and sit down,” Britt says. “But at Juice It Up, it's very much focused on efficiency and streamlining, getting people in and out, being highly facilitative of the new ways people are ordering.”

The one thing that hasn’t changed at Mountain Mike’s is quality of its product, Britt says. This spring the brand expanded its dessert menu with Mini Churrs, which bolstered the dessert category by more than 100 percent.

Britt believes those types of moves are what fundamentally keeps the company winning, alongside dedicated franchisees. It will also help the chain attract more operators in the future.

The co-owner says relationships with franchisees are key in leading restaurant chains of Mountain Mike's and Juice It Up!’s size. Supporting operators with a growth mindset and finding franchisees that don’t merely look at franchising as an investment are two integral parts.

“We now have a much more compelling franchise opportunity there than we did when we acquired the brand, as well,” Britt says. “Our job is to support our franchisees and provide really great opportunities for new folks to come into the system.”

“If they've got the passion, the personability, the interest in getting out in the community, that passion for guest service, those are the most important attributes,” he continues. “Time and time again, Mountain Mike’s and Juice It Up! are seeing multi-brand multi-unit franchisees lead the brands’ paths forward.”

Over the next five years, Mountain Mike’s hopes to double its footprint and reach 500 as it expands eastward.

“Mountain Mike's is a brand that offers a franchise opportunity that is truly national in opportunity,” Britt says. “How long it takes to get there is a bit of an unknown.

30 1st Street Unit 5
Bridgewater
MA
774-929-5234
Our coffee journey started with a Coffeehouse. It was always about the Coffee and (more)
POS Systems & Equipment