Pizza Factory is no exception to the pandemic-related success of the pizza segment.

The 105-unit West Coast chain is driving sales in all avenues. In fact, 10 stores beat their all-time same-store sales record in March. Granted, the restaurants were lapping the beginning of COVID last year, but to set marks not ever seen before—that’s an entirely different ball game, says CEO MJ Riva. Systemwide, Pizza Factory experienced its best March in five years.

Through the growth of Pizza Factory’s loyalty app and online ordering, franchisees know there’s opportunity to capitalize on more demand. How to go about that expansion is a question Pizza Factory has tried to answer dating back to pre-pandemic times.

As Riva explains, some franchisees are in metropolitan markets where they may have a 3,500-square-foot store, but they want to capture a larger audience. Pizza Factory needed a way to fill in the gaps, but in a cost-effective manner. Those early discussions led to the creation of a new, off-premises only Express model.

The Express store not only allows franchisees to add another location without the heavy investment and overhead of a typical sit-down restaurant, but it also helps them grow in their community.

“Mostly our goal was to reduce the kitchen and the equipment so that it's easier or less expensive to get into, make it more efficient, and try to make it to where it's just an easier model for people to be more of a multi-unit operator,” Riva says. “It's much easier to operate one of those than it is a dine-in.”

The Express restaurants were created in partnership with design agency Rubber and Road Creative. Starting at 1,000 square feet, the upcoming locations will divert a portion of their traffic to a pickup window. This will alleviate bottlenecking inside the store between customers ordering at the register and those wanting to pick up their orders.

In terms of the exterior, Riva says it will be hard to miss. There will be bright, LED lighting so customers feel comfortable entering the restaurant regardless of what time it is. Pizza Factory is also placing its own delivery drivers in the front parking lot instead of the back to give the appearance that business is flowing.

“One for safety of [the delivery drivers],” Riva says. “But the other is again to keep that engagement of there's something going on, you're seeing drivers leaving, and there's people around. So safety is a big deal. It's becoming even bigger for people to feel safe.”

The menu will be reduced to the most popular items. Whereas regular restaurants carry somewhere in the range of 10 sandwiches and seven pastas, Express stores will carry three sandwiches and two pastas. Pizza and salad offerings will be slimmer, as well. But there is flexibility. For example, if a unit enters an area beside a sandwich shop, and the franchisee doesn’t feel it’s necessary to carry sandwiches, Pizza Factory won’t mandate it. The same is true for when an operator feels it’s best to add a salad or another item. 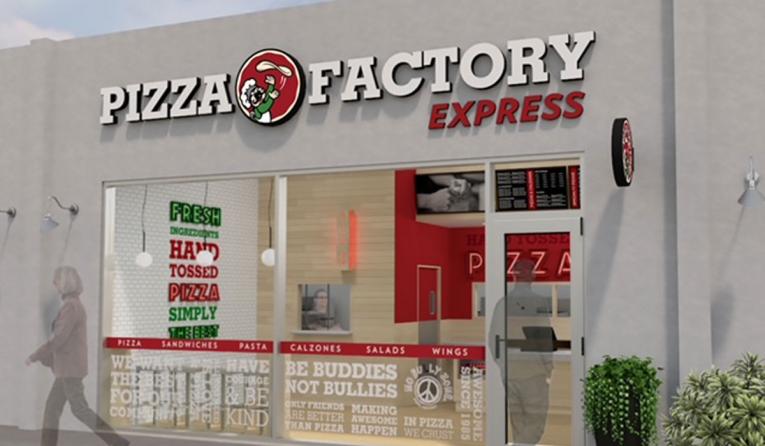 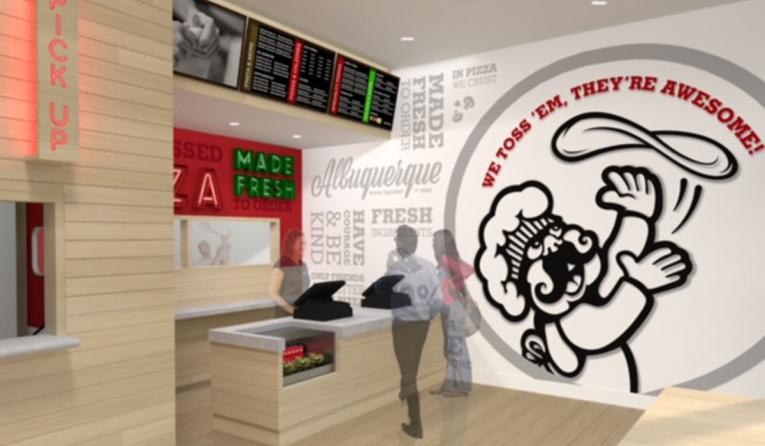 Two are planned for Texas and Merced, California. Riva says there’s a couple more that have signed, but she doesn’t want to release the markets until they’re definitively locked down. Several others are looking at the Express model right now and are in the process of finding locations. Riva expects that going forward, at least in the immediate future, 70 percent of new stores will be Express because of the model’s newness. After COVID settles, she believes the proportion will balance out.

“The reason why I give such a high percentage is because this is really going to draw a lot of multi-unit operators,” Riva says. “The ones that we have in the system now have multiple stores with us, but they're all sit-down. The flexibility of being able to open up five and actually doing an area development agreement is what I think is going to drive those numbers up higher for the Express, at least initially.”

Pizza Factory is in five states on the West Coast, but the brand recently decided to open up franchising to more of the country—in part because of demand for the Express model. Pizza Factory recently announced an agreement to open a sit-down restaurant in Athens, Georgia—the company’s first Southeast location. The store will be operated by Brandon Broadwell, a former Californian who often visited a Pizza Factory owned by Riva, who still serves as a franchisee.

Pizza Factory is looking for more multi-unit operators in Georgia and the Southeast, as well as Arizona, Colorado, Idaho, Montana, New Mexico, Texas, Wyoming, and Washington. There are some locations in the pipeline for the home state of California, as well.

“What started this whole thing was if we're going to do [Express], let's just go ahead and open it up too,” Riva says. “We’ve always had interest from folks in other states, but we've always held off and wanted to make sure that we had suppliers and everything. So we've been working on that, trying to make sure that when we do open in other states, that we're ready, and we can support them as well as we do in the states that we’re already in.”

The Express model is yet another option among Pizza Factory’s list of choices for potential franchisees. For its traditional dine-in locations, Pizza Factory offers new-build or conversion prototypes ranging from 1,500 square feet to 4,000 square feet. The larger end of the spectrum includes an arcade area, banquet room, and big-screen TVs. The chain prides itself on that type of flexibility. The 42-year-old pizza brand has never been cookie cutter, especially since it often goes after second-generation locations. Every store comes with similar proprietary elements so customers know it’s Pizza Factory, but the chain works hard to adapt and project a local, pizzeria atmosphere.

Pizza Factory has seen success in this endeavor. Riva recalls reading the review of one customer who said he picks Pizza Factory over any corporate brand. Of course, Riva’s first thought was, “Oh my God, he doesn’t even know that we’re franchise. How do I not burst this guy's bubble and not turn him off now, but at the same time tell him thank you?” 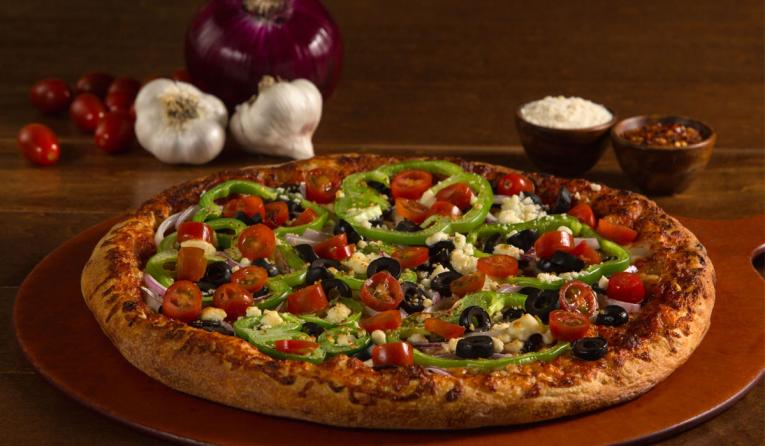 Riva chuckles at the conundrum. It’s a good problem to have.

“That's very nice because that's what we want to do,” Riva says. “We don't want the flashy menu boards and all that stuff up there. We want to be very localized. Even in our Express models, there's going to be a wall that's going to have the name of the town very large and also speak to our anti-bullying program and the community-type things that we do. So we want to make sure that people feel—regardless of what size—that this is their local pizza place that they can go to.”

With sales reaching new heights and expansion in full swing, the biggest threat to Pizza Factory’s momentum is the labor crisis, which is hitting nearly every restaurant brand. Riva says everyone she’s spoken to—regardless of industry and pay scale—has had issues with the employment market. Since the start of the pandemic, many operators have pointed fingers at the enhanced weekly unemployment insurance. President Joe Biden’s $1.9 trillion COVID package, which passed in early March, gives unemployed workers a $300 weekly boost in payments until early September.

Riva says franchisees are feeling the crunch. Some that have been in the business for 20 to 30 years are working more than they ever have.

“I mean when you go to a Starbucks, and they’re closed because they say they have no staff and that they'll reopen tomorrow at a certain time, then you know it's pretty bad,” Riva says.

Riva won’t discount the employment issue having some effect on the opening of future stores, although it’s impossible to tell where that may happen. She does know that Pizza Factory usually receives a plethora of applications from high school and college students, but the chain isn’t seeing it right now.

All the restaurant can do is adjust to the new environment, like relying more on third parties to alleviate the shortage of company delivery drivers.

“I don't think it's a permanent issue by any means, but I do think it could be an issue, and you just have to adapt to it,” Riva says. “You get the people that you can, and our staff will go out and help someone open a store while they're trying to get their crew together. I think the latest store that we opened, our crew was there longer in order to help the owner get some employees hired and trained. Like I said, we're normally just overrun with applications. It's just not happening.”

Major brands are going on hiring sprees in anticipation of an explosive summer, an exciting phase that’s already hitting Pizza Factory, Riva says. Locations in tourist-driven markets and travel corridors have seen a 15 percent increase in sales because of all the movement.

Full-service dining is returning as consumers gain confidence. Riva thinks the summer will play out just as everyone in the industry is predicting—a swarm of customers eager to dine out after being cooped up for so long.

“I think it's slowly starting to happen in the stores now,” Riva says. “At least that's what we're seeing.”