Roy Rogers has spent the past 18 months gearing up for the future.

Jeremy Biser recalls growing up in Western Maryland, where going to Roy Rogers was a treat.

Biser is now executive vice president of the 52-year-old Western-themed brand, which oversaw nearly 650 restaurants at its peak back in the late 1980s. The company began 2020 with 48 units—24 company-owned and 24 franchised—but Biser believes there’s an opportunity over time to reach back into the hundreds.

“People have a love for the Roy Rogers brand,” Biser says. “Everywhere I go, people tell me stories about experiences they’ve had at Roy Rogers at one point in their life. I want to be able to bring that back to people.”

The Frederick, Maryland-based chain was founded in 1968, and is named after a popular Western star in the mid-20th century. By 1990, Marriott sold off Roy Rogers when their hotel division faced financial woes, and Imasco, then the parent of Hardee’s, snapped it up in an attempt to transform the brand into Hardee's units to break ground in the Northeast.

That conversion attempt fell flat, and by the mid-90s Hardee's had sold about 110 units to Boston Chicken/Market in the Philadelphia area, 150 units in New York and New Jersey to Burger King and Wendy's, and 182 restaurants to McDonald's. In the late 90s, Hardee's was sold to CKE (Carl Karcher Enterprises), the parent company of Carl's Jr.

Jim Plamondon and his brother, Pete Plamondon Jr., joined Roy Rogers after Hardee's acquired the brand. They bought their father Pete Plamondon Sr.’s operating company, Plamondon Enterprises Inc., which he had established to run his franchises, in 1998. The pair acquired the Roy Rogers trademark and rights to franchise the concept from Imasco in 2002. When the Plamondon brothers officially took control of Roy Rogers, the unit count had dropped into the 40s.

Biser says the Plamondon brothers did a good job of growing company stores, but they needed help expanding the franchise side of the business. When Biser began his tenure in 2018, he took a step back for about 90 days and completed a full needs-assessment of everything—supply chain, marketing, people, operations, organizational structure, brand positioning, and partnerships. He posed multiple questions, such as how can corporate strengthen the brand and how does it relaunch the chain in a manner that addresses brand relevance and promotes growth through franchising. A three-year strategic plan was put in place, guided by four pillars—quality people, quality products, quality experiences, and quality business.

Development was paused for 18 months while the team worked on various foundational initiatives. During this process, Roy Rogers appointed industry veterans, launched with DoorDash, introduced a new store design, worked with SiteZeus to map territories, enhanced its signature menu items, and created an online store for its fan base—known as Royalists—to purchase branded gear.

So far, the results have been favorable. Roy Rogers experienced three years of negative transaction growth and slightly positive comps. In 2019, those numbers flattened and in the first period of this fiscal year (Roy Rogers has 13 periods in its fiscal calendar) the chain surpassed transaction benchmarks and saw the best comp sales period since Biser joined the company. 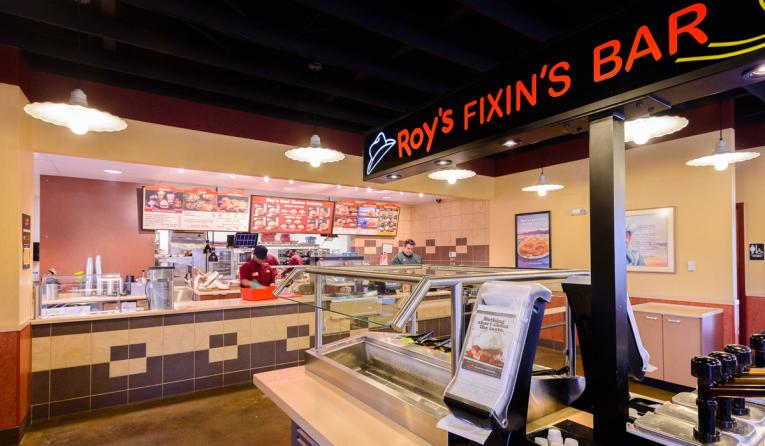 The brand operates in Maryland, Virginia, West Virginia, New York, New Jersey, and Pennsylvania. Two franchised stores are in the pipeline for the brand’s largest franchisee, HMSHost. Another company-operated store is in its final lease negotiation stage. But the main goal in 2020 is to sign two to three multi-unit development agreements targeting Maryland, Virginia, Delaware, and Pennsylvania; areas further South and West will come later, as well.

“I’d say the last 18 months was about gearing up for the future,” Biser says. “Now it’s transitioning to actually signing the people that will grow with us and building that pipeline up. This year is really all about recruiting. So then next year and beyond, the net development pipeline will start expanding.”

Going forward, each new store will feature Roy Roger’s new store design. Biser explained that it was divided into two components—improving operations and enhancing the customer experience. When it came to operations, the team focused on optimizing the drive-thru and back-of-the-house layout to reduce steps and increase speed of service. On the consumer side, Roy Rogers hired an outside design firm to elevate brand relevance. As part of the process, the team redefined its consumer base and worked with the design firm to input modifications that appealed to those guests. Outside the building, Roy Rogers added stacked-stone towers to the main entrance and drive-thru. The brand also added a description of its food as a sub logo to raise awareness among new customers. There’s a new color scheme, lighting fixtures, digital menu boards, artwork, flooring, furniture, seating arrangements, and a panel describing the company’s history.

“I definitely want to see this brand continue to be successful for another 50 years and continue to grow and come back to those markets where people love us, but also introduce us to new guests—the new consumers out there that can have those same type of experiences with their families, as well,” EVP Jeremy Biser says.

Two test stores were remodeled last year. This year, three company-owned locations and one franchised unit will undergo the remodel. Biser anticipates the entire chain will be remodeled in the next five years.

Biser attributes DoorDash as being a driver of growth, as well. It started with a five-store test in March 2019 to ensure operational efficiency. In June 2019, it expanded to 21 stores; off-premises grew up to 3 percent of sales.

“When you only have 48 locations, unless you’re in our real core area, you have to drive a good amount to get to one of our stores, past a lot of competitors,” Biser says. “So DoorDash was a way for us to increase accessibility. … There’s a lot of debate around how of much that is incremental. We believe a good amount of it is. I don’t think in the industry as a whole that the number of occasions of consumers shopping at [quick-service restaurants] through any channel is necessarily growing at that pace, but I think for us, it was a way for us to increase market share. So I do believe it’s incremental for us.”

The chain is working on upgrading its technology through a redesigned loyalty program and an updated point-of-sales system and database. Once the latter two are improved, Roy Rogers will integrate delivery into the POS systems. To create a frictionless experience, the brand will soon be equipped to handle mobile payment, such as Apple Pay.

Biser says an ideal franchisee is a multi-store operator who is looking for another brand to complement his or her current businesses. Additionally, the applicant must share the values of Roy Rogers and love the company. The future agreements with franchisees will play a significant role in bringing Roy Rogers back to its former size.

“I definitely want to see this brand continue to be successful for another 50 years and continue to grow and come back to those markets where people love us, but also introduce us to new guests—the new consumers out there that can have those same type of experiences with their families, as well,” Biser says.