Shark Tank Survivor Beyond Sushi is Just Getting Started

Beyond Sushi's plant-based cuisine was a hit on Shark Tank, and has helped the chain expand across New York City.

As much as Guy Vaknin saw the spike coming, it still wasn’t easy to hold it together. In the week following Beyond Sushi’s October 21 Shark Tank appearance, the vegan concept watched day-to-day sales explode 40 percent. The online ordering went a bit “cuckoo,” Vaknin says, as website business doubled and third-party delivery skyrocketed 70 percent.

Vaknin made sure his six restaurants were properly staffed and stocked up on product. He even assigned a team to watch over the website in case it crashed.

But unlike many Shark Tank pitches, especially those on the product side, Vaknin says the short-term upsurge wasn’t the long-term plan. He walked through the doors of ABC’s iconic series hoping to strike a partnership that wouldn’t just grow the six-unit concept in its homebase of New York City, but help it scale across the coast with a potentially explosive California footprint.

Higgins, who sees more than 100 deals come across his desk each month, according to Forbes, didn’t tip his hand too quickly, though. Vaknin came in asking for $1.5 million for 25 percent of Beyond Sushi’s upcoming West Coast venture and 5 percent of its established East Coast restaurants.

After drilling Vaknin on everything from profit level to mission statement, Higgins stood firm at $1.5 million in exchange for 30 percent of the West Coast business and 15 percent East Coast. Additionally, inventor and entrepreneur Lori Greiner joined the deal. Vaknin accepted the offer after trying to counter at 12 percent.

“Of course I was blown away by the food itself. Any non-vegan I know who has tried Beyond Sushi became a fan at the first bite,” Higgins says in a statement to QSR. “But what really got me to invest was Chef Guy himself. He works incredibly hard and has limitless passion.”

“This investment is also right up my alley,” he adds. “I’ve worked with many [quick-service] concepts on their cross-coast expansions—and I bring network of incredible founders like Guy who continue to inspire and mentor each other through their growth. With this investment, Lori and I will help Guy expand into the West Coast, but with our combined business expertise, we’re also going to do a lot more than that.”

Vaknin says getting Greiner on the deal was a surprise, and that she brings “so much to the table in terms of promotion, branding, the connections that she has.”

“Getting us into places, real estate, she’s amazing,” Vaknin says. “If we ever venture into products in the future, she’s just a beast when it comes to that.” 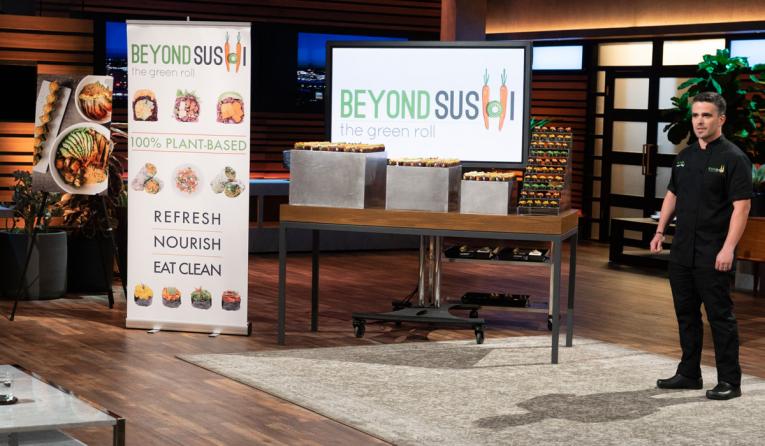 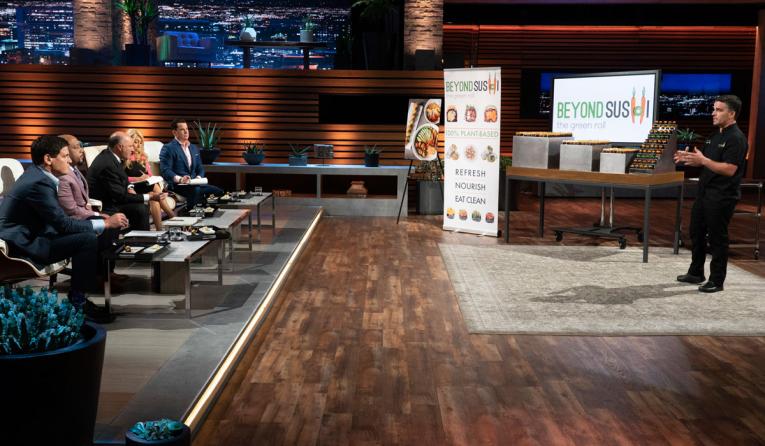 He says viewers would be surprised by how involved and engaged the sharks are post investment. Higgins checks in regularly, Vaknin says. “Always connecting and always seeing what’s the next thing, and what we’re doing. He’s been constantly involved.”

Beyond Sushi was the first vegan restaurant to ever pitch on Shark Tank. Vaknin founded the chain, which specializes in vegan sushi, wraps, dumplings, and noodle bowls, in 2012 with $70,000 he had in life savings. The first store featured 12 seats, a counter, one employee and was pushing $1 million out of a 280-square foot box. Currently, the chain runs about $2 million average-unit volumes from its larger 2,500-square foot footprints, which also feature table service. There’s a 108-square foot spot that does $600,000. Beyond Sushi is a commissary-based business as well—a model that offers Vaknin flexibility to remain agile in the real estate gauntlet that is New York City, and to meet grab-and-go demand as off-premises booms.

Vaknin says he wasn’t nearly as nervous as he figured he would be when he stepped into the Tank. His wife and business partner, Tali, pushed Vaknin to pitch on the show for years. He agreed finally and filled out the paperwork. After not hearing back initially, someone from the show connected and he jumped.

Vaknin hit the stage during an interesting crossroads in the restaurant’s history. The chain achieved $4 million in sales last year after $2.4 million the previous calendar and $978,000 the year before. But unlike 2016, when he put $600,000 profit in his pocket, Beyond Sushi actually took a $272,000 loss in 2017. Vaknin also invested $160,000 of his own money to roll some broad—and expensive—changes. This included the opening of two 2,500-square-foot unit restaurants and the commissary. Vaknin says he expects Beyond Sushi to generate about $5.6 million in 2018 and profit $300,000.

Sandy Beall, the founder and former chairman and chief executive of Ruby Tuesday, who left the casual company after 40 years in 2012, is a 25 percent investor in Beyond Sushi. 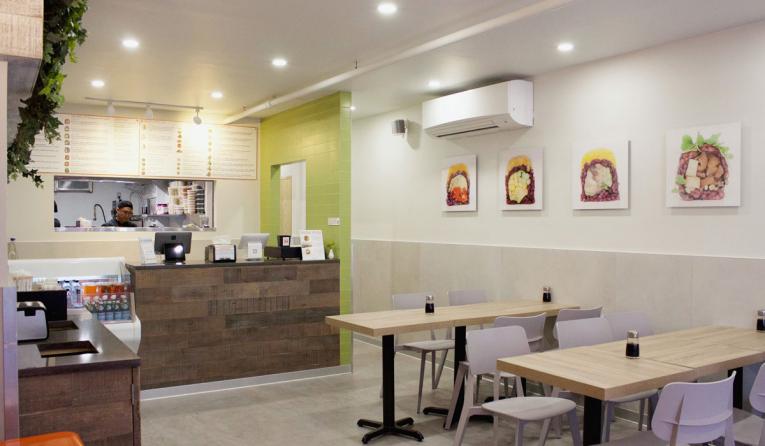 Beyond Sushi has six New York City units, with plans for more, as well as expansion to the West Coast. 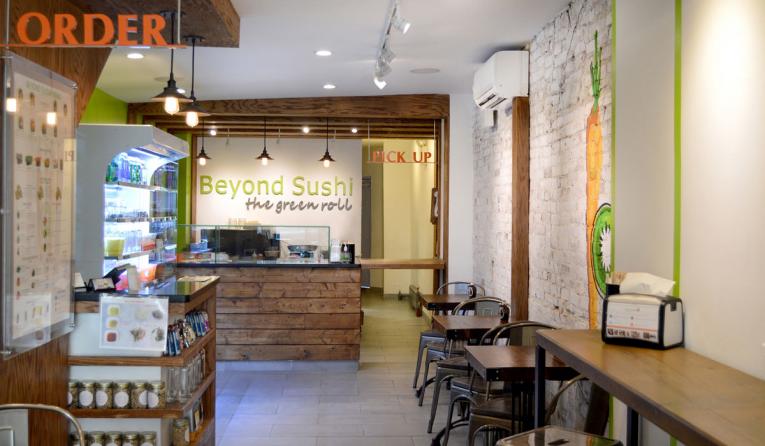 Grab-and-go or sit down, Beyond Sushi focuses on speed and a low price point. 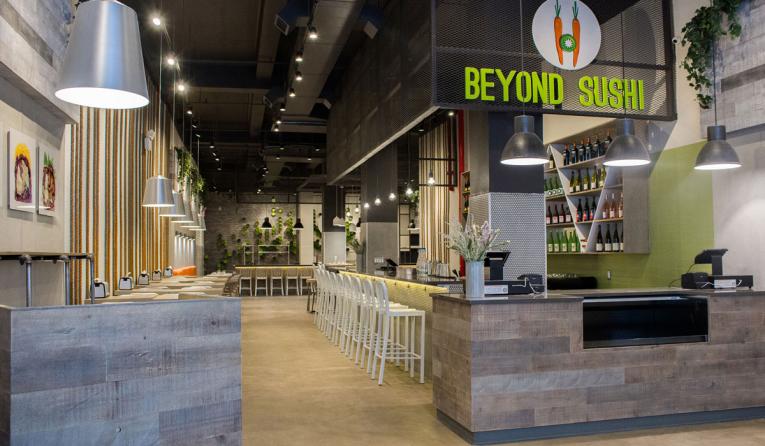 Beyond Sushi has a 2,500-square-foot unit that takes reservations and offers table service for dinner.

“I’m very attached to this business. I knew this business,” Vaknin says. “I didn’t feel like it was the right time for us [previously to pitch on Shark Tank] because I feel that before, about three years before, we weren’t structured as a company where I could introduce it to investors. We were doing great, but we weren’t built enough. The past two years have been a work in progress. Structuring and building all the infrastructure, physically, and with employees so we can actually run as a company that is ready for growth.”

“But I’ve been pushed by my beautiful wife to go ahead and do it, and by a lot of other people who told me it could be a great outlet. But I’ve holding off because I just didn’t feel ready, that the business was ready.”

They are surely ready now. The chain wants to add another four NYC stores by 2020 and Vaknin says there’s infrastructure to open 25, no problem. After that, it’s copy and paste as the health-forward chain lands in Los Angeles. The two models, between Beyond Sushi’s fast casual and its larger hybrid store, allow the brand to serve and target multiple markets. Namely those where it can rely on foot traffic (think Big Apple storefront and smaller, to-go driven units) and areas where guests park and Beyond Sushi stands as a destination restaurant. 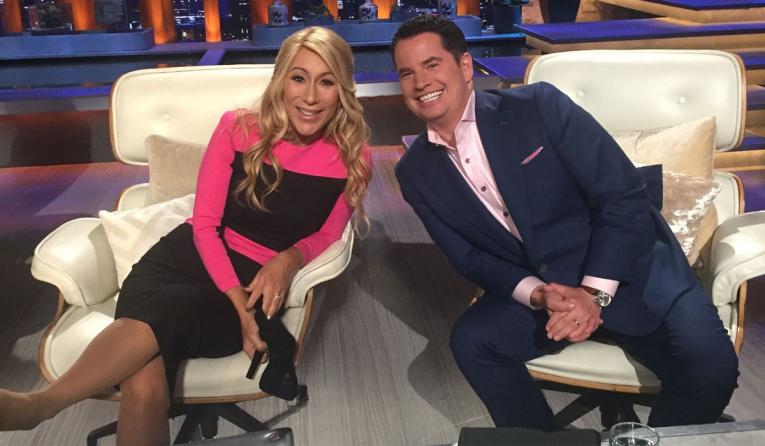 Regardless of which box Vaknin builds per DMA, Beyond Sushi sticks to speed and price as its major differentiators, as it has since day one. Even with a server, Vaknin says orders average 5 minutes. The typical eight-piece roll costs $7.50 and runs Beyond Sushi just $1.50 to make. With sauce, it comes in around 280 calories. The price does rise a bit at dinner, when guests make reservations.

Vaknin says the low price point is an essential cog in the brand's core, and has been since Beyond Sushi started in Union Square. "Volume created a certain buzz around it. Volume crated more reviews. More shares. More social media," he says. "And that in turn helped us grow quicker than just serving to a certain amount of people. So the idea wasn’t to serve only to the vegan community or the plant-based. Just serve something that was healthy that anybody could come and eat at any time of the day."

Even if he didn’t test the Shark Tank waters, Vaknin says, Beyond Sushi would still have set its growth on an upward track. “I believe and have invested my own hard work, money into it, and I would have continued doing that,” Vaknin says. “With or without them. But with them, things look a lot different in terms of just Matt giving back all of the knowledge of his concepts and the teams behind it, and financial analysts and marketing team. It all comes together. Getting access to all this stuff. That was the bonus for me.”

“Getting the funding that was great for me, too.”

When asked if he ever pictured getting to this point—pitching under the lights on one of TV’s most-watched shows—Vaknin says, like fast casuals nationwide, growing has been a day-to-day grind where it’s difficult to think beyond the present. “I had one employee when I started this,” he says. “It was me and him, and I had no money, because nobody believed in a crazy concept like this in the beginning. But you take it one step at a time. Did I see that I was going to be here with my vision and my goals? In my mind, I’m just getting started. I’m very proud of what we’ve done so far. We went far, but it’s not even close to being done. We have a lot of work to do.”