The fast casual is ready to pop the lid off its global growth.
Web Exclusives | July 17, 2019 | Danny Klein

From the garage to the global stage, challenger brand Slim Chickens is ready to invade one of the most competitive categories in quick service. On Wednesday, the company told QSR it has secured an investment from 10 Point Capital—the same firm behind the growth of rapidly expanding Tropical Smoothie Café. They’ve helped scale the smoothie franchise to 775-plus stores, with plans to open 130 this year alone.

Terms of the deal with Slim Chickens were not disclosed.

Slim Chickens, conceived by chief executive Tom Gordon and co-founder Greg Smart in Smart’s garage, debuted 16 years ago inside a former sushi restaurant in Fayetteville, Arkansas. Two years later, the brand opened a second location. The Fayetteville-based brand started franchising in 2014. Six regional franchise deals were inked that year, and the fast casual has climbed the unit ladder ever since.

And that’s about to accelerate quickly. The 84-unit chain said it plans to open 600 new locations over the next 10 years. There are more than 350 under development agreements to date. Gordon says 600 is just “the first target on the wall.”

“We expect to pass that number,” he says. “Our new equity partners expect us to go past that number.”

Gordon says Slim Chickens has had its share of suitors over the last several years. It ran into 10 Point Capital at a conference and discussions began. The firm was drawn to the chicken chain’s organic growth, story, and where it fit into the crowded marketplace.

While the brand wasn’t initially interested in striking a deal, the sides found common ground. Tom Wells, managing partner at 10 Point Capital, said in a statement that Slim Chickens cult-like fanbase proved it wasn’t restricted by state lines. “Whether in Little Rock, Arkansas, or Central London, we found in our diligence that Slim Chickens has quickly established a loyal following in whatever market it enters,” he said. “With a strong foothold in the U.S., United Kingdom and Kuwait, Slim Chickens is poised for significant growth.”

Chief operating officer Sam Rothschild was a consultant for Slim Chickens and the SVP of operations at Applebee’s International before coming onboard in 2014.

He says 10 Point Capital’s history in growing franchise brands intrigued Slim Chickens’ leadership. “And we believed, and firmly believe, that the value they bring in helping us ramp up our growth makes it an even more attractive strategic partnership.” 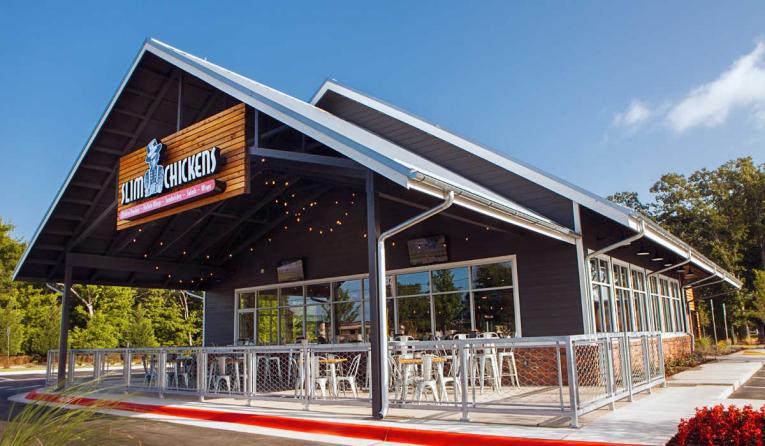 Added CFO Seth Jensen: “We had a number of potential private-equity suitors over the past few years, but we were committed to aligning with a company that would be able to drive more impact than just financing. Ultimately, we chose 10 Point Capital due to their expertise in franchising and the shared vision for the brand.”

Currently, 64 of Slim Chickens’ 84 units are franchised. The brand opened its fourth U.K. location in Birmingham, England, earlier this month and will debut restaurants in Southaven, Mississippi, and Owasso, Oklahoma in the next several weeks followed by a Southeast and Midwest push.

The franchise heavy direction will continue, Gordon says. To date, Slim Chickens has opened about two to four corporate units a year alongside the overall expansion. There are 30 franchise groups in the system today. Counting the agreements and current development, Slim Chickens has spread to 21 states. There are six international units as well across the U.K. and Middle East.

Rothschild says Slim Chickens is hitting a velocity point as franchisees brought into the system over the past year are preparing to open units or expand to second ones. “This ramp up has really started over the last couple of years,” he says. “We’re now seeing that come to fruition.”

Gordon adds that investment “will really be the catalyst to take us to the next level, just in terms of sheer numbers of franchisees and franchise stores that we have in the marketplace.”

And beyond simply building out that pipeline, 10 Point Capital’s backing will afford Slim Chickens the opportunity to add additional resources and strengthen its growth-ready infrastructure.

Rothschild says that includes everything from operations to training to marketing, franchise development, facilities, construction, and design. “All the real support mechanisms to be able to assist franchisee in opening their restaurants and then continuing to develop more restaurants in the future,” he says.

“As the system grows,” Rothschild adds, “we need to be able to support that expansion and this really gives us the opportunity to go ahead and achieve that level of support on the back end.” 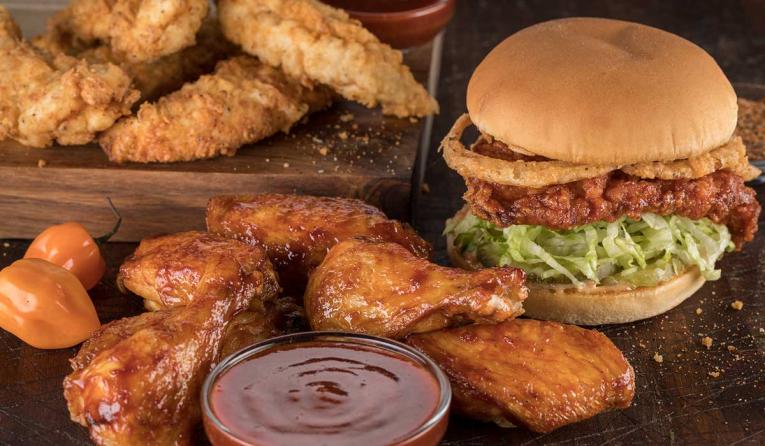 Everything at Slim Chickens is cooked to order.

As for how it will stand out from the pack, Rothschild says, Slim Chickens has done just that since inception. This will simply introduce those differentiators to a much broader audience.

The brand sprung from the observation that “no one was doing fresh chicken tenders in Northwest Arkansas,” Gordon once told QSR. The recipe was unique, Gordon says, because it wasn’t formulated based on cost.

Slim Chickens, named by Gordon’s mother, kept those standards rolling over the years. The menu of tenders, wings, sandwiches, salads, and wraps is cooked to order. “If you’re talking [quick service] or fast casual, we set ourselves apart by delivering that fresh quality product,” Rothschild says.

He adds the 2,400 and 2,800-unit prototypes, of which the drive thru plays a major role in many stores, is a modern and warm environment that reflects some internal directives. “We teach hospitality,” Rothschild says. “When you interact with our employees, whether in the dining room or through the drive thru, you feel that hospitality versus transactional type of experiences.”

Gordon and Rothschild see potential in the international side, too. The U.K. units have performed well so far and could lead to a boom in development. “If we are smart and careful with the way that we approach international growth, there is a huge opportunity for us to take this brand to all corners of the world,” Gordon says.