Smalls Sliders Wants to Be the Next Cult-Favorite Restaurant Chain

The two-unit chain has put 20 stores in its pipeline since franchising began in July.

Smalls Sliders' goal is to build a cult-like following, with employees and customers at the forefront, says newly installed CMO Katherine LeBlanc.

The marketing executive recognizes what that takes, especially coming from Twist Brands, an arts-and-crafts entertainment leader that operates 380 stores. She believes Smalls has the capability, even calling the emerging brand a “marketer’s dream.”

LeBlanc says the dream starts with a leadership group that’s “incredibly focused on what our vision and mission is for the company.” She’s specifically referring to co-founders Jacob Dugas and Scott Fargason, a senior instructor in LSU’s Flores MBA Program, and Joe Lewis, former CEO of Twist Brands. The restaurant is also backed by Brandon Landry and former NFL quarterback Drew Brees, founder and investor, respectively, of accelerating casual-dining concept Walk-On’s.

The first Smalls store opened September 2019 in Baton Rouge, Louisiana, and a second unit is scheduled to debut this fall in the same city. But those two restaurants won’t be alone for long as the brand kicked off its first franchising strategy in July.

“What we're doing next is really just taking the amazing foundation that has been set and we're shooting for the blue skies ahead of us, from a branding perspective, from communicating our ‘why,’ and then infusing our ‘why’ into our guest experience,” LeBlanc says.

Lewis says from inception, Smalls built itself with franchisees in mind. For instance, the menu is simple to navigate. Customers can choose from four combos—one, two, three, or four sliders paired with fries and a drink. There are also higher-volume opportunities with party packs of 25, 50, and 100 sliders. Beverages, which include milkshakes and Icees, are just as straightforward.

The replicable storefront is a roughly 1,000-square-foot shipping container with a walk-up window and drive-thru. In lieu of a dining room, the brand has a small outdoor patio with bench-style tables, turf, and string lights, which come in handy since the restaurant remains open until midnight.

It’s a model that's only gathered more strength and attention during the COVID pandemic. Drive-thru went from increasing orders by 4 percent in January 2020 to 22 percent by December, according to the NPD Group. Larger, more established quick-service brands, such as Schlotzsky’s, Jack in the Box, and Taco Bell have now invested more capital in building innovative, drive-thru only prototypes.

“The model has now done extremely well," Lewis says. "We're very, very satisfied with the food quality, the reception we're getting from our customer base, and then also the unit economics that are there to be able to support franchising and make sure that our franchise owners open up and do very well with the concept."

Because of the slim footprint, the CEO notes that Smalls uses half or maybe even one-third of the typical labor seen in the average quick-service restaurant. Lewis admits that Smalls is struggling with the same hiring issues as other brands in the industry, but the restaurant does have the advantage of not having to hire as many. Also, from an operating standpoint, routine costs like utilities and dumpster requirements are lower.

“We're continuing to work on that, which is really an advantage of the model,” Lewis says. 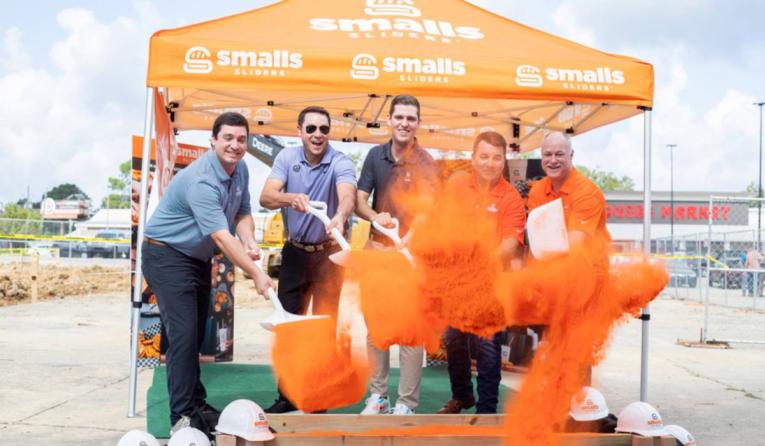 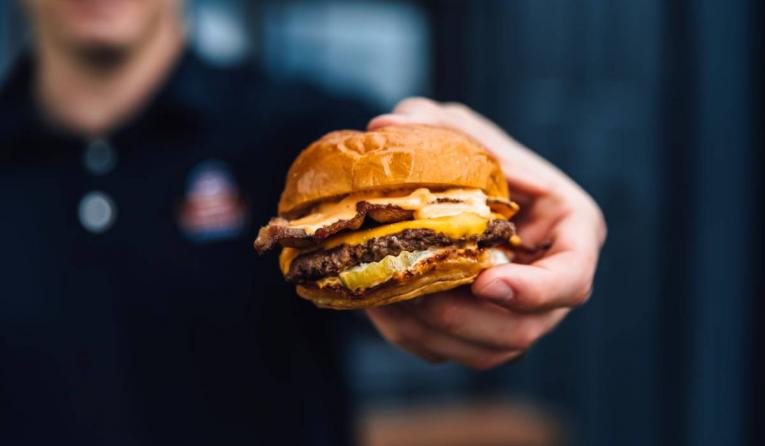 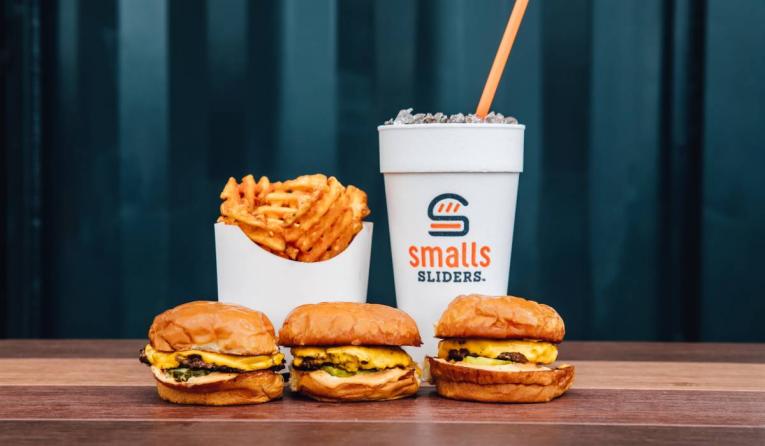 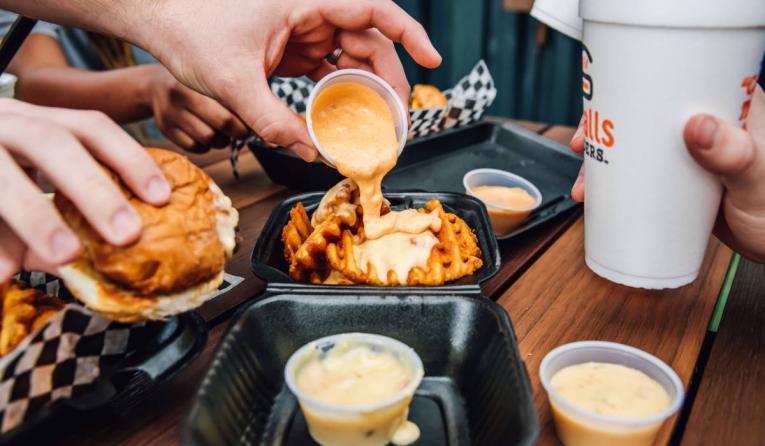 Smalls will use Walk-On’s as inspiration, but not for too many aspects since the chain operates in the full-service segment.

The CEO explains that franchising will require a two-phase strategy that begins with forming a solidified foundation in terms of training, marketing, technology, and operations. The second step is execution, and the quick-service audience has responded with strong demand. Lewis says that in the first 75 days, Smalls has closed several deals and has roughly 20 restaurants in the pipeline. The restaurant will first focus on Beaumont, Houston, and Houma/Thibodeaux, in Texas; Hattiesburg and Jackson in Mississippi; and New Orleans, Shreveport, Alexandria, Lake Charles, Lafayette, and Monroe in Louisiana.

As those markets saturate, the emerging brand will embark on national expansion. Five restaurants will begin constructions in the next three months, which is enough of a base to satisfy Smalls for right now.

“We want to make sure that we get that first phase up, we build a great foundation, and then once we do that then make sure our systems will scale to multiple units,” Lewis says. “We know they will, but we need to do the work to be able to accomplish that. When we get that accomplished then we'll extend our reach.”

Dugas doesn’t anticipate future stores straying too far from Smalls’ original shipping-container design. There may be some rearranging inside the restaurant to improve efficiency, but the outdoor look will be the model going forward, as municipalities allow. LeBlanc says the unique design is a way for Smalls to “make a brand statement immediately” and “increase the brand recognition in a really fast way” whenever it enters new markets.

The biggest change, LeBlanc says, will be determining how to handle more volume. She adds that Smalls was constructed with a certain level of transactions in mind, but the restaurant has far exceeded that projection. Dugas indicates that one of those improvements may be placing employees in the drive-thru to take orders and greet customers, similar to Chick-fil-A’s proven form of operation.

“There's changes operationally that come that we're going to get better with every day,” Dugas says. “But from a building perspective, we're always keeping in mind, the guests and our squad members, how can we make that experience, that two-to-three-minute experience that they have with us, as amazing as possible.”

As Smalls further ignites its franchising strategy, it will continue to engage Landry, who opened Walk-On’s in 2003. The brand has since grown to more than 50 locations across Alabama, Arkansas, Florida, Louisiana, Texas, Mississippi, North Carolina, South Carolina, and Tennessee.

Lewis says Smalls will use Walk-On’s as inspiration, but not for too many aspects since the chain operates in the full-service segment. He views intellectual capital as most important, particularly from Landry, who Lewis describes as being “all about people and all about culture.”

Those are key aspects that Smalls has brought to its brand. Dugas says he wants employees to place the restaurant on their resumes and for it to mean something 10 years from now. He also wants to create a culture and environment in which workers carry their experience with them and apply those lessons to whatever career they go off to next, whether that’s outside the company, or rising within.

“The byproduct of that is going to be growth and people enjoying our products and really doing something special—that’s what we're all in it for,” Dugas says. “And we're already seeing the fruits of our labor already with the acceptance of the concept and the excitement around it and just the everyday traffic that we've gotten already. And we're just excited to see where it goes. There is no ceiling for us. We want to go with as many communities and people that we can impact.”