Taco Bell's Vegetarian Menu is Another Stroke of Genius

The chain wants to have choices for everybody, it says.
Web Exclusives | April 11, 2019 | Danny Klein

Sometime last year, Taco Bell rolled out an app feature that didn’t exactly garner headlines. With one push of a button, guests could turn the entire menu meatless.

The response, however, was far from understated. “I think that led us to say, ‘wow, we probably should have a vegetarian menu,’” says Liz Matthews, the YUM! Brands chain’s chief food innovation officer.

Taco Bell likes to say internally that it’s been a friend of vegetarians for 57 years. It’s a true sentiment. After the chain’s crunchy taco, the No. 1 selling item on Taco Bell’s menu is the bean burrito. The brand even has a section of its site dedicated to guiding customers through the process. Taco Bell is the only American Vegetarian Association-certified quick-serve in the country. There are more than 8 million vegetarian combinations on Taco Bell’s menu. You could, if you wanted, customize a new meal, every day for nearly 20,000 years.

But here’s where the app update changed the course of Taco Bell’s thinking. The chain could tout statistics and certifications all it liked, but was it leaving equity on the table? The short answer was yes, for the most part. The reason being: the battle for fast-food market share is being waged on convenience right now. And for vegetarians and vegans, in regards to dining out, the process is typically anything but fast. And it’s definitely not easy.

“When you talk to vegetarians and vegans,” Matthews says, “by the time they get through ordering it’s five minutes later because they’re adding and subtracting and doing all of this. That’s a critical part.”

On April 4, Taco Bell began testing its first dedicated vegetarian menu at 60 percent of its Dallas-area restaurants, which measures to roughly 200 locations. Matthews says Taco Bell hopes to launch it nationally within the year. No quick-serve at this scale has ever done so. 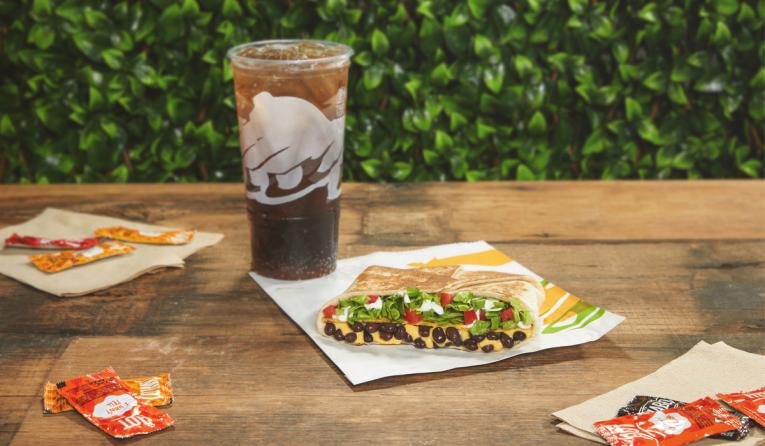 The Vegetarian Crunchwrap Supreme is a twist on the classic menu item elevated by black beans.

Taco Bell’s AVA-certified menu features new items: the Vegetarian Crunchwrap Supreme (a twist on the classic menu item elevated by black beans) and the Vegetarian Quesarito (a quesadilla-burrito packed with black beans). The 7-Layer Burrito is on there as well.

Firstly, Matthews wants to make it clear Taco Bell isn’t ditching any menu classics or disrupting what the brand leans on—seasoned beef, chicken, carne asada. It’s the opposite. A vegetarian-focused menu reinforces the architecture and direction of Taco Bell’s variety-driven goals. “We have to have choices for everyone,” Matthews says.

The unique thing about this launch, though, is that Taco Bell already boasted vegetarian-friendly food as a differentiating trait. It isn’t a costly overhaul that’s going to make operators sweat. It’s simply telling the message more clearly, with menuboards that streamline the ordering process.

Call it a menu alteration, not a revamp. But one that could serve and nurture what’s historically been a neglected quick-service customer.

“We do about 350 million servings of vegetarian product every year, whether it’s an already vegetarian item or someone is removing the protein and putting in beans,” Matthews says. “So yeah, this is a big deal for us. To shine it on a menuboard in one place and make it easy, we’re excited about it.”

Matthews says today’s customer values choice, but you have to temper it a bit. If there aren’t suggestions, some of those menu items might get lost in the well-intentioned jumble.

And if Taco Bell’s app is any indication, customers will appreciate ordering off a vegetarian menu, Matthews says, instead of asking employees to make multiple changes—a process that can be uncomfortable when fellow customers are waiting behind, checking their watches. 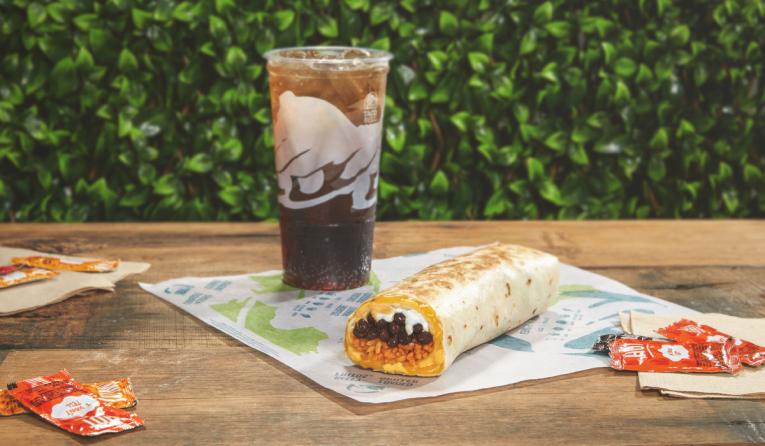 The new Vegetarian Quesarito is a quesadilla-burrito packed with black beans.

“I think the biggest thing about the menu is, all of these products, when you eat them you don’t feel like you’ve compromised,” Matthews says. “That’s a pretty big deal.”

Matthews cites data that shows the segment is growing, and explains why Taco Bell wants to front the movement before it ignites. Right now there are about 3.7 million vegans, 8 million vegetarians, and 81 million flexitarians. There are 245 million U.S. adults aged 18 and over. So it’s still a relatively minor slice. But by 2020, studies show, half of the population could fall into one of those three categories.

“We talk about this whole thing as a trend, but it’s not a trend. It’s actually people are eating differently,” Matthews says. “They want choices and they might want to decide to not eat meat for a couple of days a week or whatever their preference is. So we’re going to have a lot of fun with this.”

Taco Bell is just starting the innovation process, Matthews says. The brand wants to see how consumers react to the vegetarian menu before it lifts the lid on future options. As Taco Bell has proven in the past, there’s really no telling what that will entail. For example, Matthews says, the brand “probably has about 600” total menu ideas currently in the works.

“This is all in the spirit of this great brand that people are excited about,” she says. “That they have choices and delicious products they can afford.”

No matter what Taco Bell comes up with, Matthews says, the AVA will vet the products, as they have been for the past three or so years, to make sure the brand is meeting the standards vegetarians and vegans require. The third-party accreditation process isn’t an easy one for Taco Bell, but Matthews says it’s worth it. “We’re all about transparency and people actually knowing what they’re putting in their bod,” she says. “So they’re continually coming in and validating and verifying that everything is the way it needs to be.” 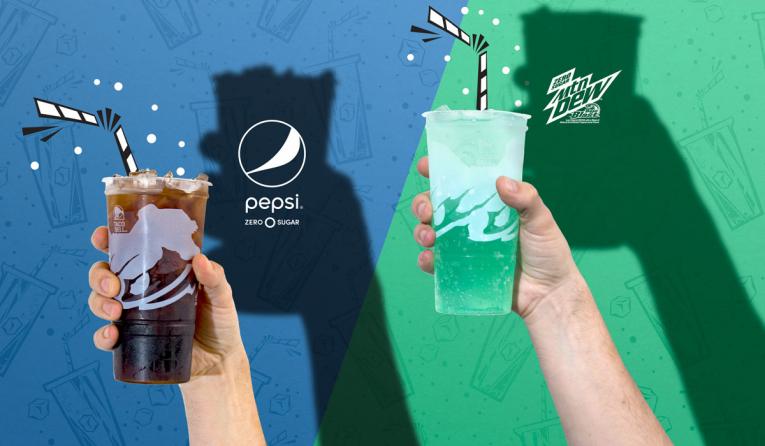 Taco Bell is committed to reducing sugar in its fountain beverages.

The chain recently launched two new zero-sugar beverages, Pepsi Zero Sugar and Mountain Dew Baja Blast Zero Sugar, and announced a new commitment that at least 50 percent of its medium fountain beverages would be 100 calories or less, and contain less than 20 grams of sugar by 2022.

“I think this is just really about listening to our consumers and making sure that we’re relevant for everyone,” Matthews says. “And people are looking for options with less sugar. And that’s great. So we want to support that lifestyle. And if you want a Baja Blast, we’ll support that, too.”

System sales were up 9 percent as net new unit growth upped 3 percent. Taco Bell opened 151 restaurants in the quarter and debuted 309 for the year, including 94 international units, bringing the total to 7,072 restaurants. In 2018, the brand’s franchisees committed to more than 1,100 international units under development agreements.

“We talk about this whole thing as a trend, but it’s not a trend. It’s actually people are eating differently. They want choices and they might want to decide to not eat meat for a couple of days a week or whatever their preference is. So we’re going to have a lot of fun with this.” — Liz Matthews, Taco Bell's chief food innovation officer.

There were some interesting flashes in Taco Bell’s performance last quarter. One was speed of service, which improved 3 seconds at lunch and 2 seconds at dinner. COO David Gibbs said the change drove more than 4 million additional transactions during the quarter.

Taco Bell’s new value menu, known as the “Cravings Value Menu,” has also flooded the system. It replaced the previous dollar menu on December 27 and is divided into four categories: Specialties, Sweets, Tacos & Burritos, and $5 Boxes. Taco Bell said it would continue to inject new items into the tiers as the year progresses.

In 2019, Taco Bell has also launched nationwide delivery to more than 4,000 U.S. restaurants. This was significant because Taco Bell integrated its point-of-sale system directly in the Grubhub app—a company YUM! has a $200 million stake in. Now, pickup is timed to the moment an order is ready. Delivery is available on Taco Bell’s site, where guests can plug in their zip code and be directed to Grubhub. They can also just go to Grubhub’s site or app.

This integration improves accuracy as well as efficiency, which is why Taco Bell took its time rolling the platform out.

Taco Bell fully removed the synthetic preservative tBHQ from all of its menu items (it previously removed all artificial colors and flavors from its core menu, and, where possible, plans to continue removing preservatives and other additives from its food).

Taco Bell is in the process of reducing sodium from its menu and is aiming for a 25 percent total reduction by 2025.

The chain recently rolled out recyclable cold cups and lids in all of its U.S. restaurants, which account for more than 95 percent of its drinks sold. Taco Bell said it is committed to making 100 percent of its restaurant cups recyclable by 2021, with help from partners at the NextGen Cup Consortium Challenge.

What’s Next for the Fast-Food Drive-Thru Menuboard?
Why AI and ML are Key Ingredients for Quick-Service Restaurants
Panera Starts Testing Automated Voice Ordering

The State of Restaurants: Demand, Price, and a Race for Loyalty
Inflation Sends Restaurant Customers on a Hunt for Value
Inside Restaurant Brands International's $1 Billion Bet on Firehouse Subs