AI and Machine Learning Enter the Kitchen at Chipotle

The fast casual is piloting new technologies to boost operations.

Chipotle’s next era of technology has begun to take shape inside restaurants, with a central focus on optimization. On Tuesday, the fast casual announced it’s piloting multiple technologies to streamline operations and strip friction from its business. The first, trialing in select Southern California restaurants, is a cook-to-needs kitchen management system that provides demand-based cooking and ingredient preparation forecasts to “optimize throughput and freshness while minimizing food waste,” the company said.

Deploying AI and machine learning, the system monitors ingredient levels in real time and alerts employees how much to prep, cook, and when to start cooking, while automatically populating real-time production planning for each restaurant.

“The new kitchen management system has alleviated manual tasks for our crew and given restaurant managers the tools they need to make informed in the moment decisions, ultimately enabling them to focus on an exceptional culinary and an outstanding guest experience,” said Curt Garner, chief technology officer, in a statement.

Meanwhile, Chipotle is also testing advanced location-based technology to enhance its app functionality. For guests who opt-in, the program can engage with Chipotle app users upon arrival. It then uses live data to offer order readiness messaging, wrong pickup location detection, and reminders to scan the Chipotle Rewards QR code at checkout.

“Empowering our restaurants with advanced technologies is critical for operational excellence and better positions our teams for our ambitious growth plans,” Scott Boatwright, chief restaurant officer, added in a statement

Flybuy’s platform is one used by Applebee’s and IHOP parent Dine Brands as well, which expanded its partnership in August to include delivery optimization for virtual brands. The casual chains activated Flybuy Pickup’s delivery integrations directly with DoorDash, UberEats, and other third-party vendors. It consolidates off-premises orders with virtual brand orders in an effort to make order fulfillment more efficient for employees and quicken the crew member-to-drive hand-off.

Essentially, orders are placed through virtual brands’ websites or via an aggregator’s marketplace, and Flybuy communicates to the fulfilling restaurant with a delivery driver’s ETA and an approaching and arriving state. All off-premises orders are visible from Flybuy’s Dashboard. It was a system previously used by Applebee’s and IHOP for its curbside and in-store pickup to time up and throttle business for accuracy. 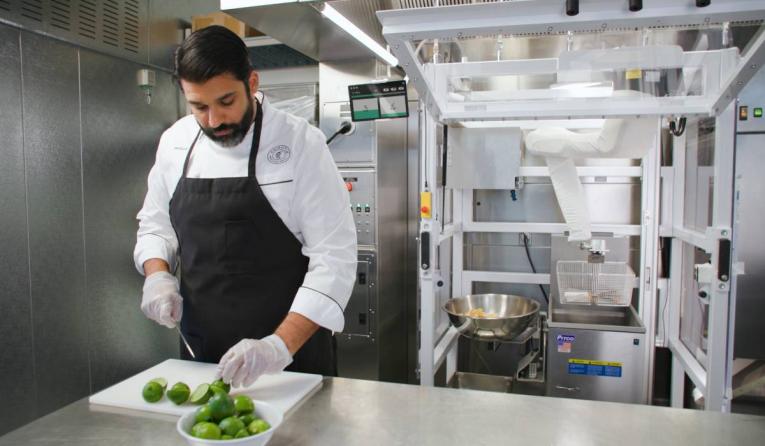 Chippy will start cooking for guests live next month.

In addition to the new tests, Chipotle said it’s autonomous kitchen assistant introduced earlier this year—Chippy—has moved to its next stage of testing. Announced in March, Chippy, from Miso Robotics, the creators of “Flippy,” makes tortilla chips. It uses AI to replicate Chipotle’s recipe—corn masa flour, water, and sunflower oil—to cook chips, season with salt, and finish with a hint of lime juice.

Chipotle recently relocated Chippy from its Cultivate Center to official installation in-restaurant. It will start cooking chips for guests next month in a Fountain Valley, California, restaurant. Chipotle said it will listen, test, and learn from employees and guests before deciding on whether to roll Chippy nationwide.

“Flippy 2,” which takes over the fry station in an effort to free up workers for other tasks, is moving to triple-digit White Castle locations. Like Chippy, the robot was designed to improve worker efficiency and divert labor to more guest-facing tasks. Miso Robotics said Flippy 2 performs more than twice as many food preparation tasks compared to its prior version, including basket filling, emptying, and returning.

Once the product is placed in the bin, AI vision identifies the food, picks it up, cooks in the correct fry basket, and places in into a hot-holding area.

Eliminating the transfer lessens human-to-food contact and decreases potential oil dripping and burns caused by lifting and moving baskets, the company added. It’s a closed-loop system where Flippy 2 operates on its own without human intervention in the middle of the process. The end result being throughput 30 percent higher (roughly 60 baskets per hour), according to White Castle.

The overall aim for Chipotle has become crystal in recent months. In April, the brand created what it labeled “Cultivate Next,” a venture intended to make early stage investments into “strategically aligned companies.” The goal being to support seed to Series B stage operations that could accelerate the brand’s goals, such as tech and innovation. It started at $50 million, financed solely by Chipotle. 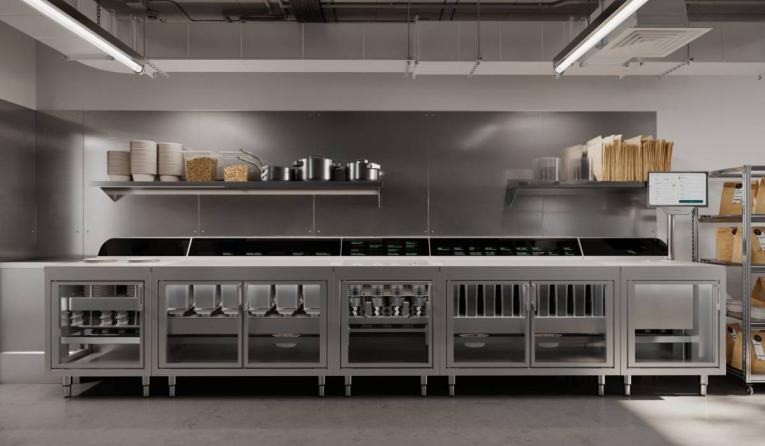 Garner said Hyphen (above) reimagines “the intersection between makelines and digital kitchens.”

San Jose, California-based Hyphen’s first product, “The Makeline,” is an automated system that uses robotics and a customized operating system to give kitchens a “reliable and precise way to make a fulfill orders,” Chipotle said at the time. The hallmark is it assembles all digital orders under the counter via automated production while allowing staff to assemble in-house orders from the top of the counter.

Garner said it reimagines “the intersection between makelines and digital kitchens.”

In Q2, Chipotle’s systemwide sales lifted 17 percent year-over-year to $2.2 billion, and same-store sales grew 10.1 percent. Through mid-May, comps were projected to reach the high end of previous guidance (10-12 percent), but numbers decelerated toward the back end of the quarter, which Chipotle attributed to a combination of macro pressures, normal seasonality of college-based stores, and handling growth with a relatively new workforce.

Chipotle launched an ops initiative to retrain workers on the fundamentals of business and implemented a new labor management tool to ensure the right number of employees are scheduled during certain parts of the day.

Getting more out of labor remains a key directive as turnover rates press the industry and the overall job pool sits 600,000 or short of pre-COVID levels. Labor costs in Q2 were 24.8 percent for Chipotle, up 30 basis points from 2021 due to the chain’s decision in May of last year to grow wages.

Chipotle’s hourly (crew, kitchen manager, service manager) turnover rate hit 194 percent in 2019, up from 141 percent the prior year. As noted, it raised average hourly wages to $15, added referral bonuses, and spent time refining pathways for advancement in response. Additionally, crew members can now become “restaurateurs,” which is what Chipotle calls its highest GM role, in as little as three and half years. If they get there, earning potential hikes to $100,000.

And as this evolves, the brand will work toward streamlining operations to match its throughput goals. The fast casual said in July it wanted to reach 2013/2014 throughput levels, back when restaurants were fulfilling orders in the high 20s to low 30s on a per 15-minute basis. Chipotle laid out this goal in 2019 and it began to pay dividends in early 2020 before COVID hit.

CEO Brian Niccol said in Q2 said some stores—with teams that have been together for years—were earning $5 million to $7 million, proving restaurants have “tremendous upside” when efficiency is at its best.

“We’re confident that if we can get our team members to understand what it means to be, call it, rush-ready in their places and ready to go, there’s no reason why we can’t get back to those high 20s, low 30s on a per 15-minute basis,” Niccol said.

Chipotle, which opened 42 restaurants in Q2, 32 of which were Chipotlanes, and expects to debut 235–250 this year, reported average-unit volumes of $2.8 million last quarter, with 39 percent owing to digital. It’s tracking toward $3 million plus and even above $4 million at some point, Niccol said.