The brand went public on Thursday as it prepares for a national push.

Portillo's has made a name for itself across the country shipping iconic products.

At 67 locations, Portillo’s 600-unit target over the next 25 years is hardly a paltry one. It would signal growth of 900 percent for a brand in business since 1963, when Dick Portillo took $1,100 meant for a first home and used it to purchase a 6-by-12-foot trailer. The investment became The Dog House, a hot dog stand in Villa Park, a middle-class suburb located 20 miles west of downtown Chicago.

Although the company has never closed a store since, it’s opened just 10 over the past three years.

Yet people continue to ask CEO Michael Osanloo why Portillo’s isn’t thinking bigger. Why one of the highest-volume concepts in fast casual, if not the highest, won’t slap a four-digit figure on the whiteboard. “I want every single Portillo’s that we open to feel and operate like a Portillo’s,” Osanloo says.

Portillo’s is not a simple operation, with 7,800-square-foot boxes that take 87 people, on average, to staff. Restaurants generate average-unit volumes of $7.9 million and store-level adjusted EBITDA margin of 28.6 percent—both high marks across the sector, according to The NPD Group. In the 12-month period that ended June 27, locations welcomed 825,000 guests. Drive-thru sales alone were $4.9 million per unit—more than double McDonald’s 2019 figures. Dine-in sales came in at $1.9 million and delivery $850,000. Before COVID, Portillo’s raked in $4.4 million within the four walls.

These layers are why Portillo’s plans to temper growth, relatively speaking, and follow a corporate-led path that doesn’t franchise domestically.

That road to 600, however, began in earnest Thursday as Portillo’s made its stock market debut. It opened for trading at $26 per share, higher than the chain’s initial public offering price of $20, and good for a valuation of roughly $1.86 billion. Portillo’s raised north of $405 million from the sale of about 20.3 million shares. It traded for close to $40 by mid-afternoon, a 50 percent rise.

“Getting to an IPO is great,” he says, “but it’s by no means the finish line. We need to have eight, 10 quarters of really amazing performance to even remotely start feeling comfortable.”

Portillo’s begins that path with momentum. Through the first six months of 2021, its sales rose more than $50 million, year-over-year. Adjusted operating margins expanded to 20 percent from 17 percent. Total revenue is expected to push past $500 million this year, up from $455 million in 2020 and $479 million in 2019. And, as noted, Portillo’s will take aim at 10 percent annual growth.

Not dissimilar to fellow-publicly traded fast casual Shake Shack, Portillo’s will web out from a base that appreciates cult-like awareness. Chicagoland stores for Portillo’s generated $9.1 million on adjusted EBITDA margins of 32 percent, per filings. Units outside were $5.8 million, and that’s closer to what Portillo’s expects (along with margins of 22 percent) for new builds by their third year of operation. Still, coupled with cash-on-cash returns of 25 percent, it would be well ahead of the counter-service pack.

Shake Shack, as a case study, pushed trailing 12-month AUVs of $4.2 million in the year before COVID. While below the $6.9 million seen across its 20 New York City Shacks at the time, it was still a result second only to Chick-fil-A in the quick-serve lexicon. And this was amid a dynamic where 85 percent of the brand’s units had spread outside the Big Apple.

A significant difference, however, is the drive-thru focus of Portillo’s business (Shake Shack plans to open its first in the near future).

Certain elements of Portillo’s massive restaurants are cookie-cutter—the kitchen design, point-of-sale, entry points. But Osanloo says the brand plans to adjust décor and cosmetics of each to match local environments. “We want to make sure that we fit into the community and that our restaurant looks like it belongs there,” he says. For instance, a Sterling Heights, Michigan, Portillo’s pays homage to the automotive industry with Ford Model T’s and bumpers lining the walls next to guitars and photos of Motown artists like Aretha Franklin. 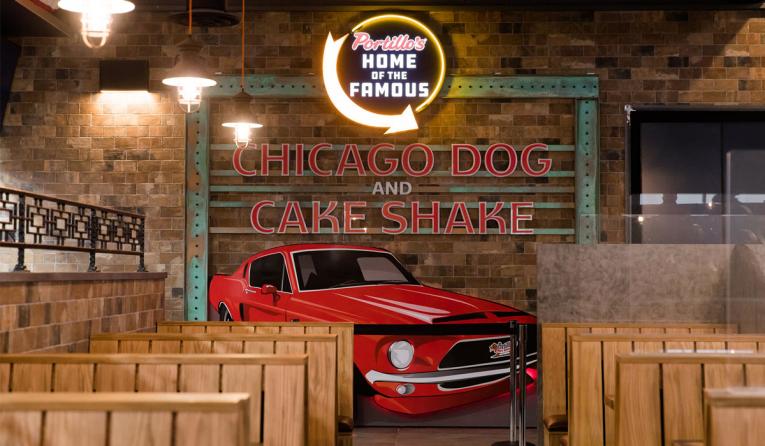 Yet guests won’t have to decipher where Portillo’s traces its roots. “It is Chicago-inspired street food, but in a restaurant that’s locally friendly. I think that’s really important for how we build and how we think about our designs going forward,” Osanloo says.

Portillo’s venues, at nearly 8,000 square feet, are built for the off-premises rush, a trend coming pre-COVID but lit ablaze by dine-in closures. Drive-thru runners move down the queue of cars in lanes to take orders, getting tickets to the kitchen as quickly as possible. During lockdowns, when employees weren’t required to man front-of-house operations, it was common to see eight or nine runners moving among vehicles at peak hours. Guests were getting orders in before they reached a menuboard. Even when lines stretched 30–40 cars deep, the company said it was getting people out in 5 or 6 minutes. Portillo’s also benefited from a two-lane system that allows cars to peel off and exit if they get food before cars ahead of them do.

Portillo’s is also actively building dedicated entrances so third-party drivers and curbside customers can park nearby, get their food, and leave. “We’re being really smart about where the puck is going,” Osanloo says.

The brand is preparing to pilot a pick-up-only restaurant (no dining room), complete with three drive-thru lanes, in Joliet, Illinois, as well, and has a ghost kitchen setup with Kitchen United in downtown Chicago.

The Joliet location, Osanloo says, is going to be a highly branded experience where employees wear uniforms that resemble a NASCAR race. It’s on a 1-acre pad instead of the 2-plus-acre lots the company typically targets. “I think it’s an exciting test,” Osanloo says, adding it should open in Q1 of 2022.

So where is Portillo’s going exactly? Osanloo has a two-pronged map on the table. One strategy will be to build from the chain’s strong Midwestern core—natural and organic expansion into familiar states like Indiana, Wisconsin, Michigan, and Ohio.

The other vector is all about opportunity. Portillo’s has the Sun Belt circled so it can capitalize on the three fastest-growing states in the country: Florida, Texas, and Arizona. Beyond what the demographic numbers tell Portillo’s, Osanloo says, there’s clear latent brand demand. “I know it because we ship food there,” he says. People who tap out of Chicago winters often end up in these very boom markets, too, Osanloo adds.

But to the shipping point, Portillo’s has 67 stores in nine states, yet in the past five years, has shipped 2.7 million sandwiches (Italian beef, sausages and hot dogs) via its direct-to-consumer shipping channel across all 50 states. And Texas happens to be the No. 1 landing spot. In turn, Portillo’s will open a flagship in the Dallas suburbs.

The brand’s performance hasn’t relied on a single product, either. While known for its Italian Beef (23 percent of sales) and hot dogs/sausages (14 percent of mix), Portillo’s sold more than $600,000 worth of salad per restaurant last year. No single menu category accounted for more than 23 percent of sales. Its lunch and dinner dayparts were nearly even as well, with 52 percent of business taking place during the former.

Portillo’s is also steady throughout the week. Before COVID, Monday through Wednesday all mixed 12 percent of sales. Thursday rose to 13 percent, with Friday at 17 percent, Saturday at 18 percent, and Sunday slipping to 16 percent.

“I think it's one of the things about our concept that I love so much,” Osanloo says. “People use us for multiple occasions every single day.”

As important as any element going forward, Osanloo adds, will be protecting “the feel and the culture and the vibe at our restaurants.” It starts with a non-negotiable brand standard of having experienced GMs in restaurants (a position paying into the six figures these days). “In the last several years we have really leaned into being a values-based organization,” Osanloo says. “And so we have our people who have defined our values as being family, greatness, energy, and fun. … That's what we stand for and what I love now is that that's how we hire.”

“Being a valued-based organization and only opening restaurants with an incumbent Portillo’s GM is the secret sauce for us to keep our culture vibrant as we expand outside Chicago.”