If the fast casual is going to get to 7,000 locations, it's going to have to start within.

For the first time in nearly four years, Chipotle gathered GMs and field leaders at its “All Managers Conference” in Las Vegas. Roughly 3,200 people attended. At one point, executives asked employees who had been promoted over that stretch to stand up. “And you know what?” CEO Brian Niccol told investors Tuesday. “Almost every person in the room was standing up.”

This, as much as any metric, offers a glimpse into Chipotle’s blueprint as the sector’s labor challenge marches on. Last Friday, the fast casual’s annual sustainability report showed turnover rates skyrocketing across the board—but especially at the hourly level (crew, kitchen manager, service manager), where figures surged to 194 percent from 141 percent the prior year.

Chipotle in May footed the bill of higher wages, making the call to boost average rates to $15 per hour by the end of June. The upgraded scale resulted in hourly employees earning day one pay of $11–$18. Additionally, Chipotle outlined a path to “Restaurateur,” a six-figure GM position hourly workers can reach within three-and-half years. Chipotle then rolled a $200 employee referral bonus for crew members and a $750 one for apprentices and GMs.

All told, Niccol said, Chipotle’s starting rate, competitive as it appears, isn’t where progress will entirely be made. That’s become table-stakes sector-wide, with wages at restaurants running 11 percent higher, year-over-year, in March, per the BLS. “What people get really excited about is where that starting wage can take them,” he said. “And our company can take them really far and also really quick.”

Chipotle’s benefits suite, namely its debt-free degree program, are “great,” Niccol added, and something that will continue to separate the chain. But again, it’s not the deal cracker. Some 6 percent of the hospitality industry’s total workforce quit in February—more than any other field. Getting employees not to leave has become as pressing as getting them to show up. “When I've had the opportunity to get out in the field and talk to people, what they're really excited about is the fact that they're a part of a company that's committed to its purpose and committed to growth,” Niccol said.

Despite mostly being “back to business as usual,” he said, with Omicron-triggered turnover exclusions and higher training costs sliding back, it’s a conversation Chipotle continues to have.

Niccol was asked Tuesday what’s next after “Chippy,” the company’s autonomous kitchen assistant from Miso Robotics it’s preparing to test at a Southern California location.

The answer, Niccol responded, was Chipotle asked employees what other tasks they’d like to see automated going forward to improve their jobs. “Because we know if the employee experience improves, we'll have better retention and also we'll have better execution for our customers,” Niccol said.

"Obviously, Chippy is our first attempt,” Niccol said, expanding on the potential of automation. “And we've worked with a lot of our employees to identify what are the tasks that they would love to see us bring automation to or AI, so that hopefully the role can become less complicated. And then I think there are just other places in the back of the restaurant where we have the ability to automate, whether it's on the digital make-line or other tasks.”

In 2021, alongside the lofty turnover rates, 90 percent of restaurant management roles at Chipotle came from internal promotions. On average, six employees were promoted per restaurant for a total of nearly 19,000. The company’s internal promotion rate was 77 percent for apprentice and GM roles in 2021.

Chipotle’s salary level (apprentice, GM, restaurateur) turnover in 2021 was 43 percent, higher than 31 percent the year before, but better than 49.1 percent in 2018.

Chipotle created “Emerging Leader and Mentoring” programs and launched a fresh learning management system called “The Spice Hub,” which focuses on up-skilling through gamification and immersive education. “The best thing we can do is make sure that they're trained, so that they're successful in their job, and then that we give them a culture and a leader that develops them so they realize they have the growth opportunities at Chipotle,” Niccol said.

“… That's our proposition,” he added. “That's who we are. If you want to be a part of that we're going to be building lots of restaurants that present an opportunity for you to be a part of it.”

Chipotle is on track for 8–10 percent net new unit growth, per year, as it targets 7,000 North America units (more than half of Chipotle's 3,000 stores have built in the past decade). Naturally, it’s going to require more crew, GMs, and field leadership to get there. That’s why the company created the “Restaurateur,” ladder, Niccol said, and also why Chipotle zeroed in on the GM trajectory in particular. They can advance to certified training manager, field leader, team director, and regional vice president. Two GMs who started as crew members have made it to that latter, high-level role.

Niccol said Chipotle is currently in the 85–90 percent range of restaurants staffed to model. Pre-COVID, it was closer to 80 percent.

“Going forward, one of the things that we’re really happy to see actually is at the manager level and above we’re seeing more stability,” he said. “So we’re seeing less turnover take place there. Usually, how that works then is that cascades into the crew.”

Chipotle’s salary level (apprentice, GM, restaurateur) turnover in 2021 was 43 percent, higher than 31 percent the year before, but better than 49.1 percent in 2018.

This past year was an Omicron rollercoaster, Niccol said. Stores were understaffed. It was increasingly difficult to get people to sign up to work. Through higher wages and more defined growth paths, however, he said Chipotle made “tremendous progress” in stabilizing, especially at the manager tier. “So what the challenges were in 2022—I think we get them,” he said.

Niccol said Chipotle will use the scheduling platform to refine deployment and forecasting. One of the brand’s pressing spots today is its expeditor role, or the task in between making a burrito and payment. 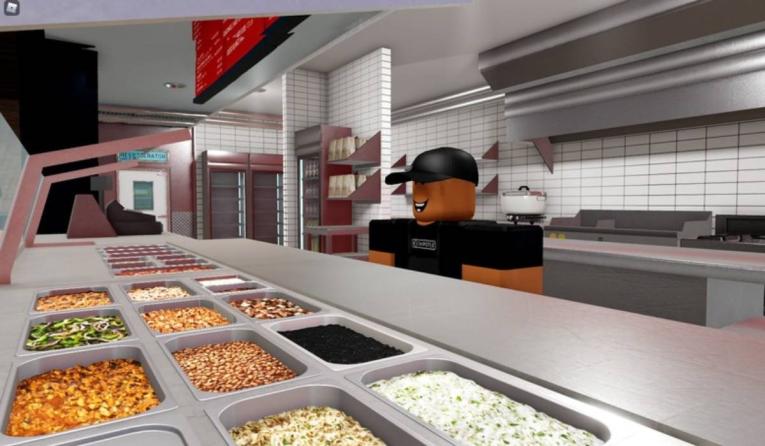 Chipotle was able to push the top-line largely due to higher prices, which climbed 4 percent at the end of March and will present year-over-year increases as high as 12.5 percent during Q2 before dropping to 8.5 percent by year’s end.

Still, restaurant-level operating margin in Q1 declined from 22.3 percent last year to 20.7 percent. Niccol said restaurant margins remain “bumpy” due to inflation and noted Chipotle felt it would eventually recoup. For now, higher level of commodity inflation from avocados, tortillas, and dairy led to Chipotle missing the 22 percent margin guidance it outlined last quarter. It expects to get to 25 percent in Q2, “assuming we don’t see additional inflation above our current estimates,” CFO Jack Hartung said. Cost of sales this past period were 31 percent, or an increase of about 100 basis points, year-over-year. Everything was up, Hartung said, but most notably beef, avocados, and paper. That number should remain near 31 percent as higher menu prices offset elevated costs.

Commodity inflation overall was 12–13 percent in Q1, which Hartung described as "the most difficult period I’ve ever seen in terms of commodity month to month, quarter to quarter."

As is the sentiment industry-wide, for the most part, he said Chipotle has witnessed “very little resistance” to its pricing efforts thus far. Even with pricing up about 10 percent, transactions rose 5 percent (11 percent on a two-year basis). Check declined 6 percent—a visible sign in-store dining, which is generally more of an individual occasion versus digital, and appreciates lower attachment rates, is picking back up.

Chipotle's sales trends accelerated through the quarter, too, as January was up about 5 percent due to Omicron disruption, suggesting comps improved to high-single digit, if not low double-digit, in February and March, BTIG analyst Peter Saleh wrote Wednesday in a note.

On the topic of taking additional action, Niccol said, “I really hope we don’t have to.” Yet it’s the same line as recent months: If Chipotle can’t find efficiencies to offset higher costs, it will leverage pricing. “I really don't want to be ahead of it,” Niccol said. “So I think a great example is probably what you just saw over this last quarter. Look, inflation continued to move in a big way. We saw it wasn't going away, so we had to take the pricing action that we did. And hopefully, that won't continue to be the case. But if it has to be the case, we have, I think, the organization, the people, and the pricing power to do it. But it really is the last thing I'd like to do.”

Chipotle opened 51 new restaurants in Q1, of which 42 featured the company’s order-ahead pickup Chipotlane. Even with timelines getting stretched in the COVID dynamic, the brand expects to open between 235–250 units this year, with at least 80 percent touting the feature.

Mobile location analytics platform Placer.ai ran foot traffic analysis on Chipotle, which showed the company saw visit levels above pre-pandemic levels every week this year up until the week of April 11. Most recently, visits rose 12.7 percent during the week of April 11, 17.8 percent the period of April 4, and 11.7 percent leading up to March 28, compared to the same weeks in 2019. But what’s notable is how Chipotlane venues tracked. 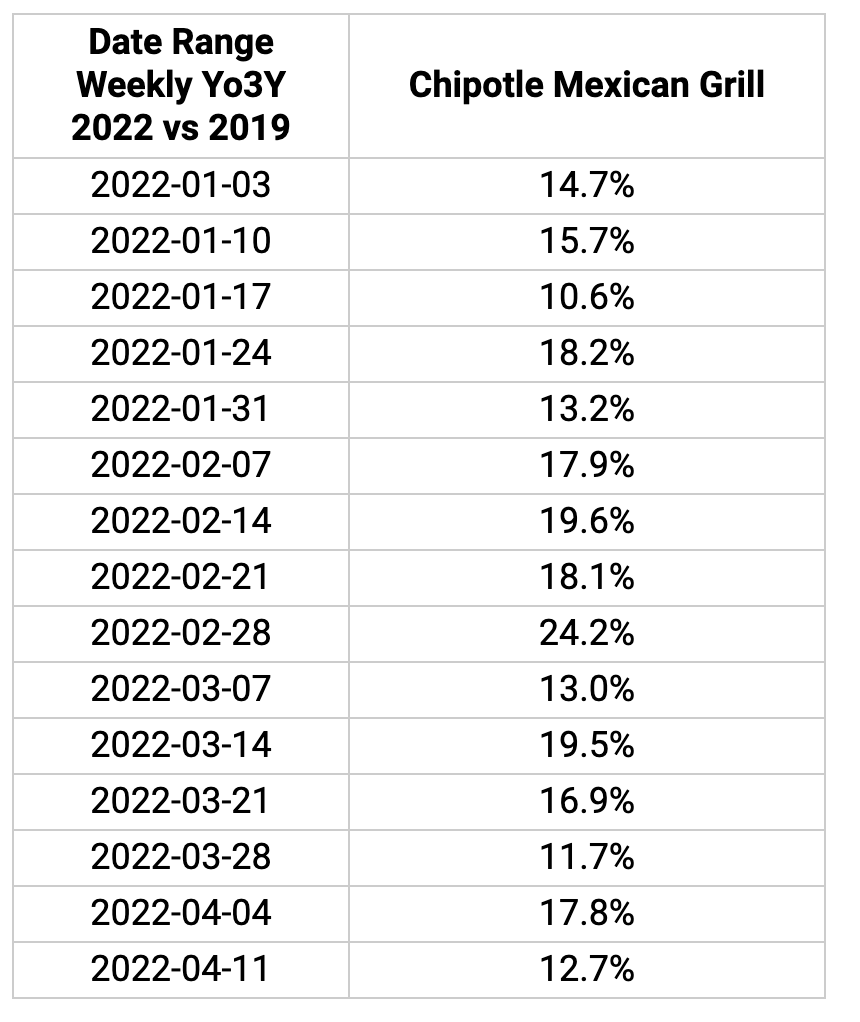 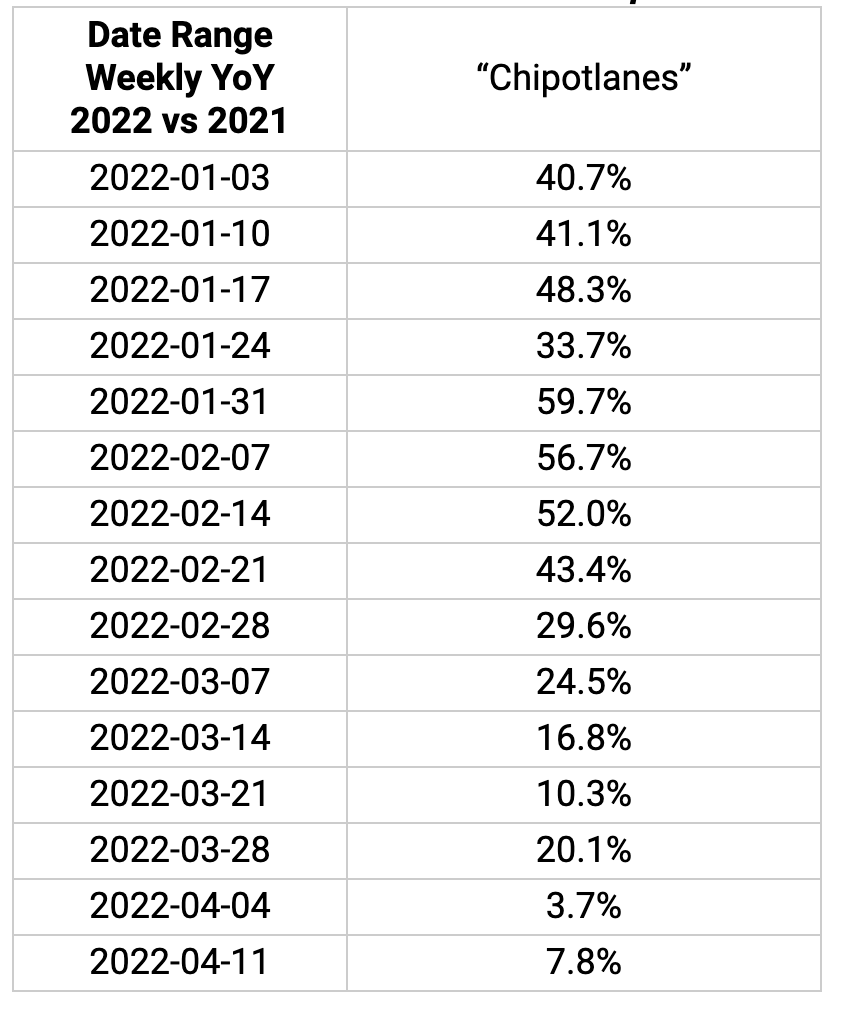 “Chipotle remains one of the top performers in the fast-casual restaurant category in 2022, with visits running at a mid-teens clip versus pre-pandemic levels,” says R.J. Hottovy, head of analytical research at Placer.ai. “Chipotle’s is the result of several factors, including digital ordering enhancements and ‘Chipotlane’ pickup windows [where visitations have outpaced the rest of the chain]. In mid-March, the company saw strong response to its Pollo Asado launch, with chainwide visits increasing in the high teens compared to 2019.”

Hartung also hinted Chipotle was working to figure out a dessert proposition or another add-on item, like guac, which is in 50 percent of transactions, or queso, which is closer to 20 percent. “If we could find another add-on like that, whether it comes as a dessert or in that space, like a queso [or] guac, you'll see us continue innovating in those areas,” Hartung said.