Chipotle hasn’t been immune to the inflationary pressures weighing on restaurants. In Q2 and Q3 of this year, the fast casual’s menu prices rose 9 and 10 percent relative to the prior year. Yet the effort hardly deterred consumers, with transactions on a three-year basis coming in at 17.5 percent, including 8.5 percent growth in Q3 compared with 19.8 percent the previous quarter. Double-digit price hikes have resulted in modest, if any, impact on guest counts, BTIG analyst Peter Saleh said. And he believes, assuming traffic remains robust, Chipotle will lean further into price lifts later this calendar into next.

In Chipotle CEO Brian Niccol’s view, it’s not just about a consumer suddenly willing to spend after months of COVID-19 lockdowns. “Even as I look around, I would put our chicken burritos up against a lot of food out there,” he said Thursday during Chipotle’s quarterly review. “And when you start to look at where pricing is going on a lot of their menus, our value proposition, I think, looks even more compelling.”

“So I don't know what that's worth, but what I do know is, I like being in a position of a really strong value proposition going forward, given the environment that I think we're all going to be facing,” Niccol added.

What that landscape looks like is anybody’s guess. Industry-wide, skyrocketing labor and commodity costs are pushing the ceiling of a traditionally value-driven sector. But for how long?

“We’re skating on very thin ice with the consumer,” he says. “We don’t have enough help. Supply chain is an issue. … Discretionary income is going to drop. You’re going to see a rapid rise in the value menu.”

Just a few nights ago, he adds, he noticed McDonald’s advertising the $1 $2 $3 Value Menu again. Domino’s in Q2, announced mid-October, posted its first negative U.S. comp in 42 quarters. The main culprit, in addition to lapping a 17.5 percent increase from last year, was a “very challenging” staffing environment that’s made it difficult to find drivers. Domino’s shortened hours and reduced service in response.

Howard says Fazoli’s has had some restaurants with single-digit employees. “What we want to do and what we want to become and what our gold standard is, we’re not able to achieve today because there’s just not enough employees on the market,” he says. “We’re in an arms race right now, and a lot of people think of that more as global warfare, but I think about it more as there’s just not enough arms out there to do the work. We are at a crippling point in our industry.”

Despite challenges, Fazoli’s comps were up 12.2 percent month-to-date and 28.7 percent on a two-year, and it’s tracking toward another month of multiple-digit increases. Fazoli’s credits this to drive-thru, off-premises growth, and an $8 price point with options Howard says “nobody can do,” like Lobster Mac & Cheese.

To Howard’s sentiment, though, Niccol also believes Chipotle, while generating positive sales, is leaving some business on the table. “At the end of the day, I wish all our restaurants were fully staffed and I know we're missing sales because not all of them are fully staffed,” he said. “So there is still upside in getting our staffing solved every single restaurant.”

Chipotle’s revenue increased 21.9 percent in Q3 to a record $2 billion, thanks in large part to same-store sales growth of 15.1 percent. Digital sales lifted 8.6 percent and accounted for 42.8 percent of the business. Operating margin was 12.3 percent, an increase from 6.7 percent, and restaurant-level operating margin was 23.5 percent, 400 basis points higher.

CFO Jack Hartung said Chipotle’s price raises combatted a couple of realities. One being higher beef and freight costs, which “unfortunately are continuing to worsen.”

He added it’s difficult to predict how much of these inflationary headwinds are ultimately temporary versus permanent, but it seems bankable they’ll persist for the foreseeable future. Freight, in particular, Hartung called “astronomically high.”

“And the ability to get the supply we need is very, very challenging,” he said. “So we want to see how that normalizes. There are material shortages not just with our food and paper but also with our openings as well.”

The good news for Chipotle, again, is the fact it has room in its menu to protect margins.

“There is food inflation, as we talked about,” Hartung said. “We don't know how much of this is temporary, or transitional, or is it permanent. But what we do know is we've got what we believe is great value. Our customers continue to appreciate Chipotle. They love the convenience, they love the value, and so, we believe we got pricing power really better than almost anybody, if not everybody, in the industry.”

While 10 percent sounds sizable, it was taken in stages. Four percent came in June to support higher wages, roughly 2.5 percent was related to delivery, 2 percent national, and the rest came in light of beef price pressures. Also, the figure is sloping to 7.5 percent in Q4 as a “good part of the delivery pricing” taken in Q3 and Q4 of last year rolls off.

This coming quarter restaurant margins are expected to be 20–21 percent, or about 200–250 basis points below Saleh and consensus estimates. The primary difference being higher marketing expense in the quarter (about 100 basis points) to support Chipotle’s smoked brisket LTO, as well as higher food costs tied to elevated costs, freight, brisket, and less pricing.

The other element Hartung referenced was labor costs, which clocked in at 25.8 percent in Q3 for Chipotle, or roughly 50 basis points above last year. It was fueled by Chipotle’s decision to increase average nationwide wages to $15 per hour. Given ongoing wage inflation and new unit openings, Hartung expects labor costs to run in the mid-26 percent range next quarter.

The climate is adjusting growth, too. Chipotle, despite some delays, opened 41 restaurants in Q3, including 36 with a “Chipotlane.”

READ MORE: Inside the Rise of the Game-Changing 'Chipotlane'

The brand has more than 110 restaurants under construction today, although the timing remains unpredictable, he added. Still, Chipotle should end the year with more than 200 new restaurants—75 percent of those featuring the mobile-order-ahead pickup window. Chipotle plans to provide a growth timeline next quarter, however, due to the challenges at hand.

The long-term goal for Chipotle remains 6,000 North America restaurants with average-unit volumes north of $3 million. Niccol also briefly touched on international whitespace during the call, calling it a “medium to long-term opportunity.” Chipotle has opened one new Canada restaurant year-to-date and has several more in the works, including its first Chipotlane. Western Europe is on deck as well. 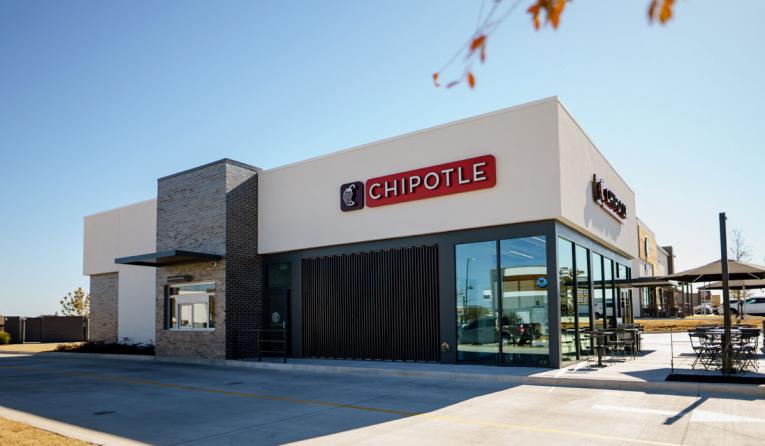 More on labor, digital gains, and the changing face of Chipotle’s business

In the past 18 months, Chipotle made operational adjustments to adapt to a shifting world. It’s an effort wrapped around the fact it continues to retain about 80 percent of digital sales gained during COVID alongside in-restaurant recovery, which has returned about 80 percent.

Chipotle has needed to allocate labor among different roles, including its digital make-line and the frontline, depending on available staff. Essentially, trying to strike an operational balance between its two businesses. Staffing challenges are proving an exercise in flexibility, Niccol said.

Chipotle has been able to keep its frontline (cafes) open given its ability to divert orders on the digital line to overcome periodic challenges. On-site managers are making that call.

The frontline represented nearly 60 percent of Chipotle’s business in Q3, or $1.1 billion in sales. And it’s only growing. “We still have some work to do, but our goal is to provide exceptional throughput as speed of service is a foundational element of convenience that our guests truly value,” Niccol said.

Meanwhile, digital sales upped nearly 9 percent in the quarter to $840 million. Similar to chains across the sector, mix is moderating as dine-in returns, but digital dollars are still growing. In fact, year-to-date, Chipotle generated digital take of close to $2.7 billion—slightly below the $2.8 billion figure it achieved all of last year.

A key for Chipotle is its two separate avenues are serving different customer needs, and proving incremental. Currently, about 65 percent of guests use in-restaurant as their main access point. Twenty percent tap digital. And the remaining 15–20 percent use both. “We're encouraged by this dynamic as it gives us several future opportunities, including the ability to convert more of our in-restaurant guests into higher frequency digital users,” Niccol said.

Chipotle’s highest-margin transaction, digital pickup orders, are gaining traction as well, Niccol said. It represented slightly more than half of digital business in Q3. Naturally, this is one pulsing reason the brand is dedicating 75 percent-plus of growth to Chipotlanes.

Niccol said internal numbers show Chipotle is getting food from order to guest in less than 10 minutes. It was 12 minutes a couple of quarters ago. That’s only going to improve as more Chipotlanes enter the system.

As of September 30, there were 284 of them, including 12 conversions and eight relocations. So far, they’re opening with 10–15 percent higher sales, Hartung said. Margin is higher because sales are, and also due to efficiency. The digital business at Chipotle is usually 10–15 percent higher, meaning it’s closer to 55 percent these days. Notably, Chipotlanes skew toward order ahead.

With an incremental investment cost of $75,000–$85,000, it’s “by far, a superior return,” Hartung said. “It’s not any smaller than a typical restaurant, so it doesn't take a different footprint,” he said. “What we are experimenting with though is a smaller footprint with a Chipotlane, where we might be able to go into a seen location. And the seen location would be where you've got two restaurants already. They could be very, very high-volume restaurants and there just isn't really enough room to economically put a third restaurant in between those two.”

“Well, if you can reduce the footprint, which reduces the rent, reduces the investment cost and because we have higher margins with Chipotlane and because customers—more than 50 percent of them want to go through the Chipotlane order ahead and pickup—it's mostly digital and almost half of that is order ahead and pickup,” he added. “[Then] we do have an opportunity economically to drop in a restaurant in between those two high-volume restaurants.”