Chick-fil-A and the rest of the quick-service industry are focused on meeting a changing customer.

Consumer preference remains the restaurant industry’s North Star. That’s something preached quite often, and it’s an enduring fact despite what changes. It feels as though, however, operators have been asked to shift more in the past 24–36 months than the previous three decades. Here’s a telling statistic from the full-service arena: According to the American Customer Satisfaction Index, diners who order food for delivery are far more satisfied (score of 83) than those who dine-in (73). That’s a pretty crazy notion.

Arguably, quick-serves outpaced sit-down chains in recent years because they were faster and better suited for innovation. The things younger consumers asked for: technology and menu upgrades, delivery, online ordering, and other convenience-fueled channels that help restaurants compete with a growing at-home sector—they’re second nature to limited service. Per The NPD Group, 46 percent of Baby Boomers order less than one meal per month via delivery. For millennials, it’s 29 percent who order one or more meals per WEEK via delivery.

NPD pegged the dining-out-of home opportunity as an $870 billion slice of the restaurant industry. For perspective, casual dining amounts to roughly $86 billion of that competitive set.

The at-home segment accounts for another $750 billion pool, according to NPD.

And you could argue there’s more pressure on full-serves to win their core—dine in business—while also expanding into an off-premises frontier they weren’t originally designed to serve. Just the store layouts themselves present hurdles. Quick-serves, meanwhile, were mostly equipped to capture business outside the four walls since inception.

This all bears asking, though, is off-premises a more incremental opportunity for sit-down chains? In addition, is the focus on convenience and technology to meet shifting consumer preferences deteriorating customer experience for limited-service restaurants? Given that brands across multiple sectors can now offer convenience, paying attention to guest experience is becoming increasingly important for counter-service operators. The once-banked on trade off for fast food—price and speed for food quality and better service—isn’t so clear-cut anymore.

The ACSI released its Restaurant Report for 2018–2019 on Tuesday morning. The widely cited model interviewed 23,468 customers for this edition. They were asked to evaluate their recent experiences with the largest sit-down and quick-service restaurants in terms of market share, plus an aggregate category consisting of “all other,” or smaller brands.

SEE WHERE THE FULL-SERVICE BRANDS RANK IN 2019

THE ROLL DIGITAL IS PLAYING FOR QUICK-SERVES 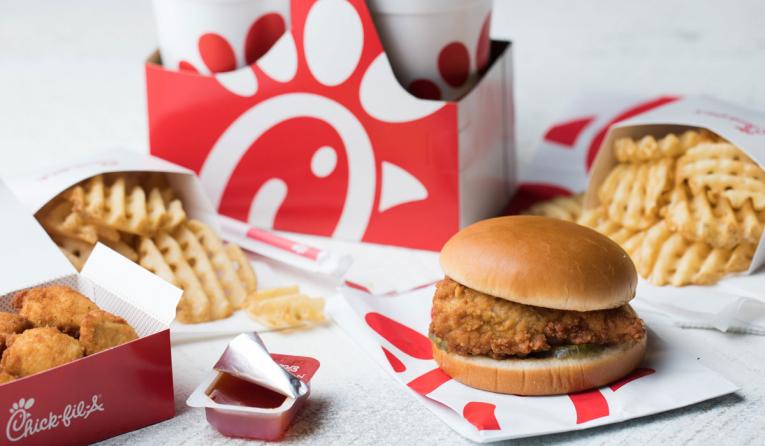 Chick-fil-A's lead is still wide, despite a 1 percentage point drop from last year.

Speaking to the previous question, ACSI reported a decline in overall customer satisfaction for limited-service chains. It fell 1.3 percent to 79, which trailed the full-service segment after holding a brief lead two years ago. Full service scored an 81, same as last year.

ACSI’s data found that quick-serves slid in nearly all aspects of the customer experience. The only element to improve was beverage variety (80), which, along with food variety (80), still rates on the lower end. Food accuracy declined 2 percent to 86. Likewise, staff showed less courteous (84 versus 85) and both beverage and food quality declined to 83 from 84 and 85, respectively.

Even service speed retreated 2 percent to 82—a level that was lower than full-service restaurants’ 83. While it seems pretty unlikely quick-serves are slower than sit-downs in general, it does speak to perception. With the tech available, expectations are simply even higher for counter-service brands to deliver on speed.

Quick service also lagged full service in the mobile space with scores of 81 for mobile app quality and 80 for reliability (compared to 84 and 86).

Again, this quick-service pool is more mature and a lot more crowded. So customers are naturally going to set a very high bar since they have so many choices.

ACSI did find quick-service websites, at 82, to be more effective than the industry’s apps. This is something we’ve explored before. According to NPD, a restaurant’s app or website represents 70 percent of digital orders and the remaining come through third-party apps or other types of apps or platforms. Customers are drawn to rewards and savings, and the branding attached to it.

The chart below shows how some key customer-experience benchmarks have trended, year-over-year, for quick-serves.

All in all, there are no significant drops—it’s a pretty stable report. But any operator would, of course, want those figures to inch forward instead of crawl backward.

David VanAmburg, managing director at the ACSI, explains the challenge ahead. “Overall, foot traffic continues to decline, and restaurants are seeking to grow sales by relying on guests spending more per visit,” he said. “Restaurants that focus on changing consumer tastes and preferences, however, could see the biggest boost in customer satisfaction.”

In other terms, operators need to invest in mobile apps, kiosks, tableside ordering systems, dedicated pick-up areas, mobile drive-thru lanes, and everything else that garners headlines in today’s changing industry. Yet customer satisfaction will always be vital to driving future sales. The more satisfied a customer is, the more willing they are to spend money in an industry where guests fork up more but show up less often (aince the fourth quarter of 2018, guest check growth has accelerated).

The golden question: What qualities are you customers looking for from your brand?

Once again (and to no great surprise), Chick-fil-A took the top spot. The brand did drop 1 percent, though, to 86. This was still good for a healthy six-point cushion from its nearest quick-service competitor—Panera Bread at 81. It’s three points ahead of Texas Roadhouse in the full-service space.

The “all others” in the graph below refers to smaller chains. Shows how fast casuals and emerging brands are challenging top-line players. Yet can those up-and-comers compete when it comes to balancing industry headwinds, like labor? That’s a dilemma unfolding as we speak. Bigger chains have taken share in the last couple of years thanks to marketing spend and the ability to leverage purchasing power to offset rising costs and guard margins.

Arby’s and Chipotle moved up 1 percent to 80. While Chipotle is not at pre-food-safety crisis levels, it has shown incremental improvement since a large drop in 2016.

Starbucks moved up a point to break a tie with Dunkin’, while KFC and Taco Bell each climbed as well during their brand transformations. Wendy’s topped the burger category at 77, followed by Burger King (76). ACSI said next year’s results could show if the Impossible Whopper was a game-changer or not.

McDonald’s has held its score of 69 for four straight years. Inspire Brands’ Sonic, a newcomer to the list, scored the highest for beverage variety, which makes sense.

“While some marks dip as low as 80, overall, it’s hard not to feel good about both restaurant segments,” VanAmburg added. “These are mature industries that have been doing what they’re doing for a long time and they’ve been successful. To have these scores from a service industry is proof that the two restaurant categories are good at what they do.” 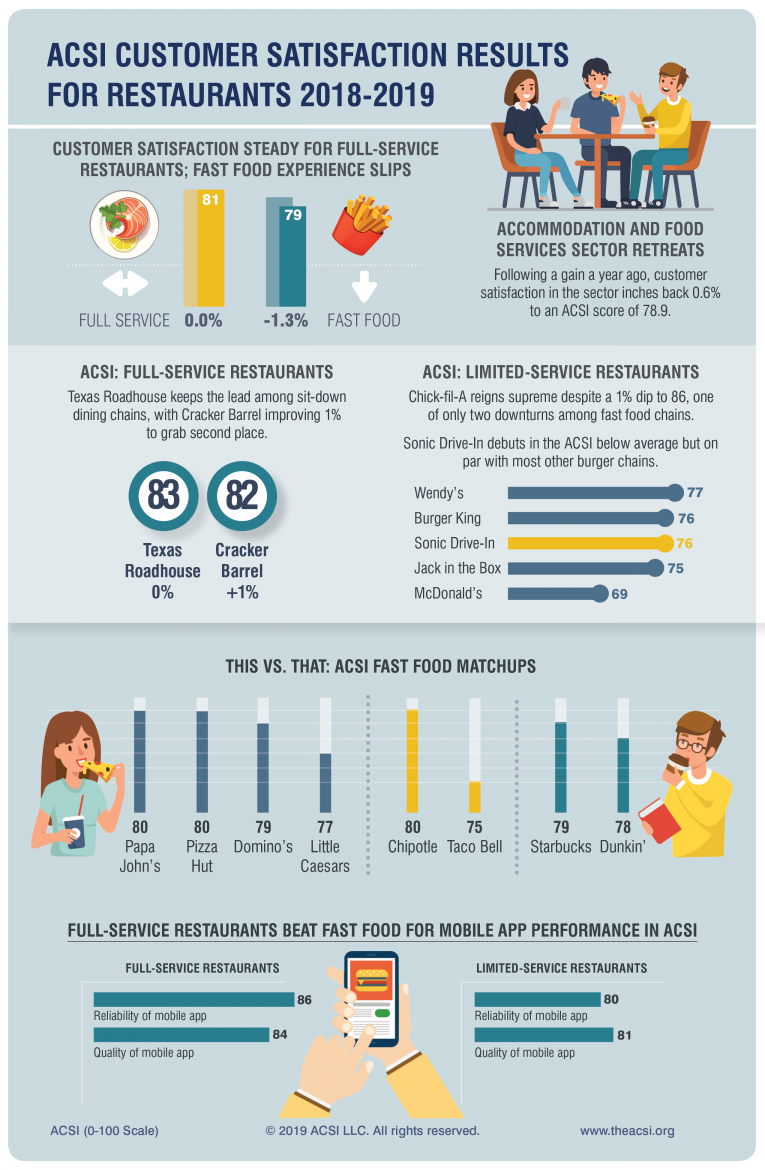