Dunkin's Espresso is a Game-Changer, Years in the Making

Espresso was a 360 degree culture change for Dunkin'.

When first revealed, Dunkin’ $100 million plan to grow its U.S. business was short on details. Sixty-five percent would support Dunkin’s “on-the-go beverage-led strategy.” Was that meant to be a sweeping statement or was it Dunkin’s carrot to keep the intrigue flowing? It appears the latter was true, as Dunkin’ prepares to officially launch one of the most significant product initiatives in the company’s 68-year history.

Chief marketing officer Tony Weisman told reporters Tuesday during a special media day at the company’s headquarters in Canton, Massachusetts, that Dunkin’s handcrafted espresso experience, which hits stores nationwide November 19 and then continues with six straight weeks of promotions (more on that later), has been in the works for quite some time. Depending on which stage you’re referencing, it can be traced back a couple of years, if not longer. Either way, Dunkin’ realized now was the optimal time to go “full steam ahead on espresso.” Last year, Weisman said, marked the first time when consumers under 35 drank more espresso beverages than hot drip coffee. Dan Wheeler, Dunkin’s vice president of strategic initiatives, added that more than 50 percent of millennials are ordering espresso beverages when they choose coffee.

On top of that shift, CEO David Hoffmann said Dunkin’s customer base is skewing younger, just like espresso, and that his kids are “graduating from Coolattas to lattes.” In other words, the transitional role drip coffee once played for soda-drinking consumers as they matured—that’s what espresso represents to this new generation of beverage drinkers. It’s the gateway coffee choice for millennials and Gen Zers.

Dunkin’, though, isn’t just diving into the category with a mirror turned toward Starbucks, the segment leader. This rollout is going to be done according to Dunkin’s brand directives. Mainly two points: speed and price.

Everything Dunkin’ did in relation to testing and envisioning the espresso centered on sticking to those traits. Weisman said they reimagined work circles. Made sure the new machines were installed properly and in the correct place to quicken workflow. Dunkin’ devised recipes so it could be “blazingly good and blazingly fast,” Weisman said.

In fact, Parag Patel, a franchisee who owns 30 locations in California and Maryland and ran Dunkin’s espresso test in Baltimore over the summer, said, “We’re faster than we used to be, even with the handcrafted element.”

He said it takes “a couple of minutes,” to make the espresso drinks. Close to 90 percent of customers said they would return to buy it again as well. There was also little to zero cannibalization during the pilot. The reason being, Patel said, espresso doesn’t trade consumers from hot or iced coffee; it targets different guests, dayparts, and goes after market share that wasn’t in Dunkin’s iced and hot drip pocket already.

Dunkin’ isn’t being shy about targeting market share with the launch. Weisman stood by comments he made previously that “there’s now no reason to go to Starbucks.”

It’s espresso for the busy lifestyle, he said.

Weisman said customers don’t need to wait 30 minutes, or pay the price they’re accustomed to. Dunkin’ is going big on that second point, launching medium lattes or cappuccinos for $2, all day, from November 19–25. Then, from November 26–December 30, guests will still be able to access that price point, just from 2 to 6 p.m. 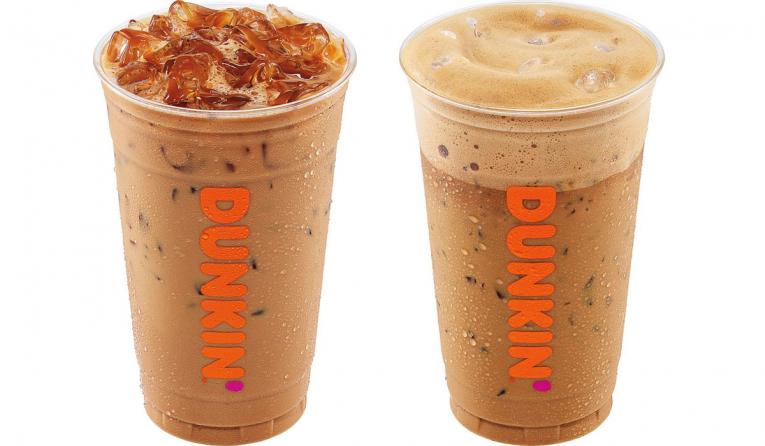 The latte innovation is just getting started at Dunkin'.

"There are a lot of competitors in this space and we think if we go after the best espresso, and we have the machines and training and the people to deliver against that, we think that’s the best place we can be." — David Hoffmann, Dunkin' Brands CEO.

“Look, they’ve got the largest [espresso] share in the industry,” Hoffmann said of Starbucks. “But it’s more about us being the best Dunkin’. There are a lot of competitors in this space and we think if we go after the best espresso, and we have the machines and training and the people to deliver against that, we think that’s the best place we can be. If you combine that with the best place in the marketplace at the speed of Dunkin’, we think that’s tough to beat ... Whether that’s [Starbucks] or any of the players in the espresso space. We think this is an area that we have to play in.”

Meredith Morris, Dunkin’s senior manger of consumer insights, said that while guests want to leisurely sit around and sip lattes in theory, the image doesn’t always fit into their busy, on-the-go lifestyles. “Espresso gives you energy while you are on the run,” she said.

Speed and price were essential, but so was quality. Dunkin’ reengineered its espresso recipe, first introduced in 2003. The new offering has more coffee, less water, and is brewed at a lower temperature. The result is a richer, fuller drink that’s forward on coffee taste and less on bitter notes. In the past, Dunkin’s espresso was mostly ordered to add into drinks. This version can—and Dunkin’ suggests just that—be sipped on its own or included in a handful of fresh offerings.

These arrive nationwide November 19, and are really just the start of Dunkin's innovation process.

Dunkin’ is also testing a Flat White, which combines two shots with steamed milk. Planned for 2019, Dunkin’ expects to launch Affogatos at co-branded Baskin-Robbins stores. Classic vanilla ice cream topped with a shot of the espresso.

Dunkin’ isn’t trying to mask the espresso as it might have in the past. “This is a huge opportunity for us to grab share,” Weisman said.

Patel called it a “360-degree culture change,” at the store level, but one that’s been overwhelmingly embraced by crew members.

Dunkin’ said 50 percent of people who visit Starbucks also go somewhere else during the week, whether that’s a local shop or some other chain. So why not Dunkin’? In the past that probably had something to do with the lack of espresso options and the specialty-drink quality perception.

Changing that was more than just a mental and training shift for Dunkin’—it required serious capital on the equipment front. The brand installed new machines across its system and conducted 4–5 hour training sessions per location. Employees become espresso certified, and there’s an online class where they can demonstrate their proficiency. 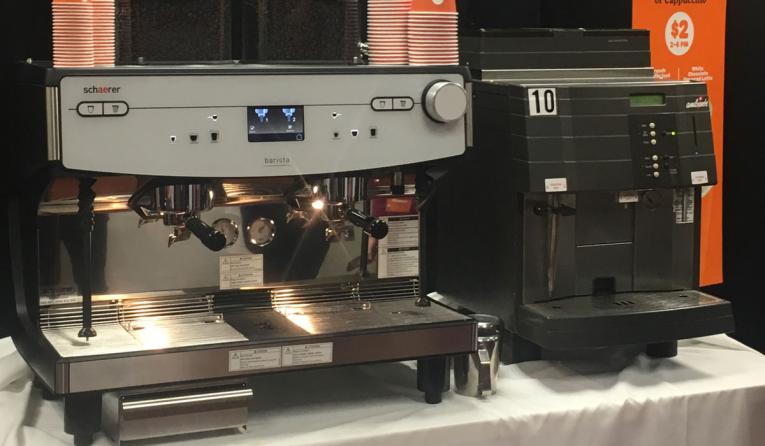 Dunkin's new espresso machines are a stark contrast to its old ones. 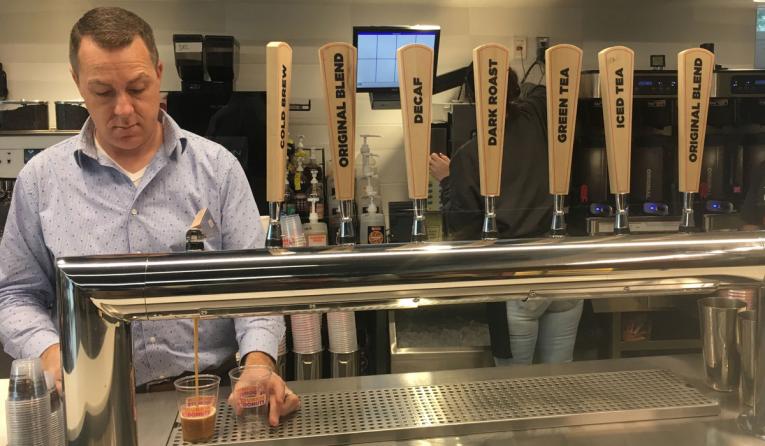 The tap system at Dunkin's next-gen stores pours everything from nitro to green tea. 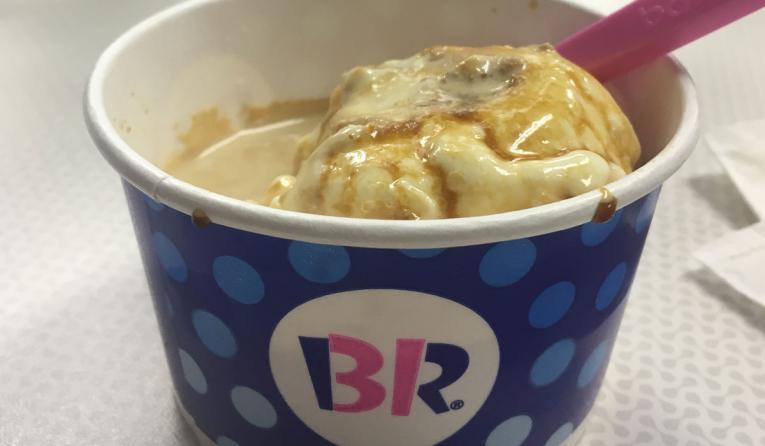 Affogatos are being tested at co-branded Baskin-Robbins and Dunkin' locations.

On November 23, Dunkin’ is offering free Lyft rides to locations (for up to 25,000 users) if they use the promo code SipDunkin from 4 a.m. to 3 p.m. On the same day, which happens to be National Espresso Day, Dunkin’ is serving up espresso shots in any beverage for 50 cents.

Dunkin’ even plans to release a merchandise line around espresso.

The espresso launch fits snuggly into Dunkin’s reenergized direction post “Donuts,” Weisman said. The October move to drop the second half of its name wasn’t just to “get on a first name basis with America,” as the brand likes to say, but it was also to highlight improvements Dunkin’ made in recent months to become a beverage-led brand. The name-change campaign resulted in 3 billion media impressions and was just the sixth logo change in Dunkin’s history, Weisman said.

This forward move includes the next-gen store, the first of which is located near the Canton headquarters in Quincy—also home to the original location. The restaurant features a front-facing bakery and an eight-beverage tap system that pours green tea and nitro-brewed coffee. There’s also a dedicated drive-thru lane for mobile orders that runs next to the traditional lane and meets at the same pickup window.

Dunkin’, as mentioned throughout the year, is planning to open 1,000 net new stores in the next three years—90 percent of which will be located outside of its core markets and west of the Mississippi. Dunkin’ expects to have 50 next-gen units open, between new builds and remodels, by year’s end. Weisman even hinted Dunkin' could eventually land in Starbucks' home state.

The company also walked reporters through an innovation building that showed facial and voice-activate software being tested, as well as a locker concept that would allow guests to scan and pickup, among other potential changes.

KFC Promotes Longtime Exec Tarun Lal to President of U.S. Business
Your Menu is Your Best Marketing Tool—Here’s How to Use It
Chick-fil-A is Testing Express Drive-Thru Lanes