A Look Inside the Fast-Food App War

McDonald's app has never been more active than it is today.

The fight for mobile customers isn’t slowing down in quick service. While the app market is a tenuous one in many respects, restaurants are finding the opportunity to be a lucrative outlet when leveraged properly. According to a Statista report last year, there were more than 2 million apps on the Apple App store. Research from App Annie showed 60 percent growth in the number of apps downloaded globally. The amount of time users spent inside of apps lifted 30 percent. What this illustrates is an app ocean easy to get lost in for some upstarts. Another data point: Quettra reported that within 90 days of download, the average app loses 95 percent of its active user base. So rewards and incentives are critical.

Here’s where restaurants can win when others can’t. Beyond the powerful brand relevancy, quick-service chains have the unique ability to play a recurring role in consumer’s lives. People eat. They might just eat at a restaurant that’s pulsing them a deal, multiple times a day. Simple, effective. And here’s some proof.

Apptopia broke down the performance of a few fast-food apps. The results showed some interesting points.

On July 12, for example, McDonald’s announced a free medium fries deal with download of its app plus a $1 purchase. It skyrocketed McDonald’s app 56 spots to the No. 2 overall app in the entire U.S. App Store on July 20.

Dairy Queen created a similar initiative—a free small Blizzard after joining its rewards program through the app—on August 29. Two days later, Chick-fil-A offered free nuggets to guests who created a Chick-fil-A One account or signed into the brand’s app. Wendy’s offered free burgers in exchange for mobile app downloads 10 days later. Check out the graphs below to see just how effective this was. 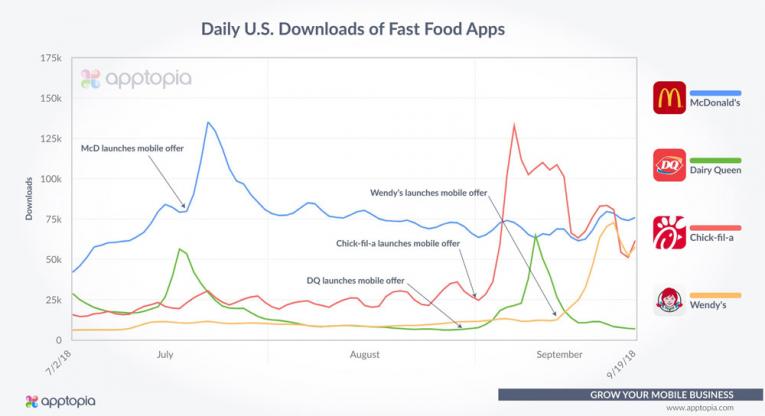 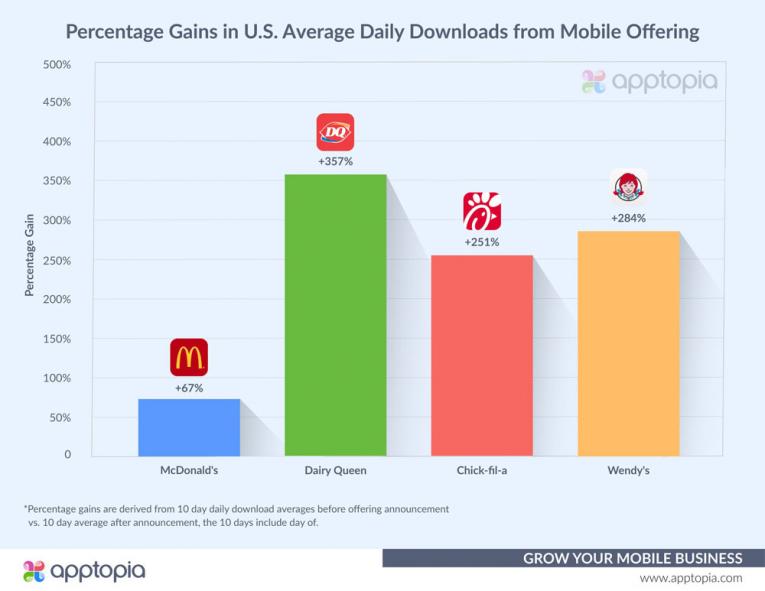 Apptopia’s data showed a significant increase in new installs for each app respective to the promotion. McDonald’s had the smallest bump, but the most average daily downloads in general.

This leads to another question, will guests keep using the app or was it a free-food grab? Will they drop off similar to the Quettra data?

Apptopia tackled this question by looking at McDonald’s. The promotion, along with Dariy Queen’s, has been ongoing. Chick-fil-A and Wendy’s pulsed the offer until September 29 and 30, respectively.

For McDonald’s, Apptopia founded that its app has been slowly, but surely increasing daily active users in the U.S., hitting new all-time highs almost daily. Apptopia’s data for McDonald’s dates back to January 1, 2015, and the chain’s mobile app has never had more daily active users than it does today. “While the promotion is ongoing, the company has yet to regress to its performance before the promotion started,” Apptopia said.

Apptopia also took a dive into the crowded world of pizza loyalty. Papa John’s, Domino’s, and Pizza Hut have evolved into companies nearly as well versed in tech as culinary at this point.

The chart below shows that Papa John’s U.S. App Store rank has risen above Pizza Hut’s every Sunday during football season so far. This even with Pizza Hut taking the torch as official NFL sponsor after Papa John’s and the league split before the season. 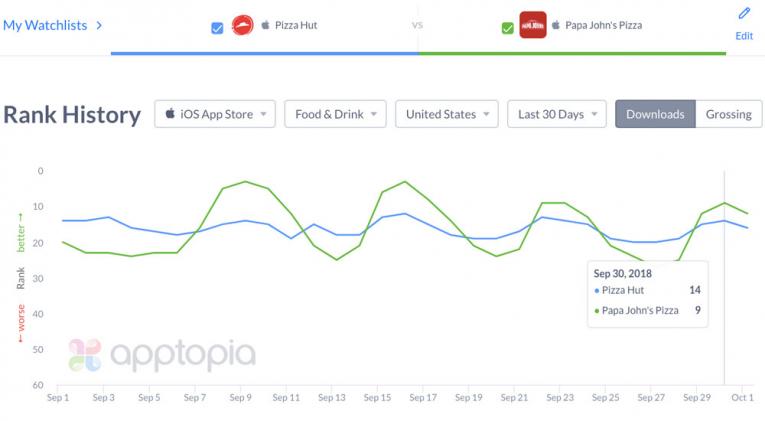 We won’t know whether these promotions inspire long-term loyalty and retention for some time. But one thing to keep in mind that paints an optimistic outlook compared to some other industries—restaurants aren’t going to run out of ways to incentivize menu items anytime soon. Let’s see who can keep the creativity and growth flowing.