White Castle is Bringing Robots to the Kitchen

It's automation for a COVID-19-changed world.

Fast Food | July 2020 | Danny Klein
White Castle
The pilot will start with one store in the fall.

Well before COVID-19, robots were a buzzy topic for quick-service restaurants. The labor market was historically tight, with no signs of let-up, and automation promised a streamlined, cost-effective approach. Accuracy and speed of service were other carrots for innovation-forward concepts to chase.

All of these things mattered to 365-unit White Castle when it engaged Miso Robotics roughly 15 months ago. But as VP Jamie Richardson says, this was “before the world changed completely.”

Yet the realities of a coronavirus-saddled landscape didn’t dilute White Castle’s interest in Miso Robotics, founders of autonomous grilling and frying kitchen assistant, Flippy. “As the pandemic came through and forced so many of us to press pause in different projects, this was absolutely one we knew we wanted to march forward with. Maybe even faster than we might have because we see it as something that meets a need.”

White Castle announced Tuesday a planned pilot with the company to accelerate adoption of artificial intelligence and robotics throughout the 99-year-old, family-owned chain. White Castle will introduce the new version of Flippy, Robot-on-a-Rail, or ROAR, into kitchens for testing and future integration. Richardson says White Castle expects to start with one unit September in the Chicago region, and then consider learnings for future deployment.

To Richardson’s point, the notion has taken on added importance of late. Automation creates an avenue for reduced human contact with food during the cooking process—decreasing potential for transmission of food pathogens. And, importantly, it enables workers to socially distance more effectively than if the line was packed, as it often is at the legacy, 24/7 brand, where orders of 100 sliders are not uncommon.

Flippy also brings smart cooking to the back, the company said, by tapping into sensors, intelligence monitoring, and anticipated kitchen needs to keep food temperatures consistent. “While they were never designed to [do this] initially, we really can reassure customers that food has had minimal contact,” Miso Robotics CEO and co-founder Buck Jordan says of pandemic demands.

Richardson adds restaurants, historically, have never weathered change as concentrated as what’s unfurling today. “It does feel like we’re entering an era where less touch is going to be really significant and important,” he says.

White Castle says the move won’t replace any of its 10,000 employees—something it’s communicated to frontline workers throughout the process. Rather, it expects Flippy ROAR to free up employees for customer-experience driven tasks. And it’s hard to gauge how roles within the restaurant will change in a post-pandemic world. The chain says more than one in four of its employees have been with the company for 10 or more years.

“For us, it’s a tool that’s there to empower our teams, not replace anyone,” Richardson says. White Castle shared the news at its leadership conference in February, which Richardson says feels “like it was about 20 years ago.” 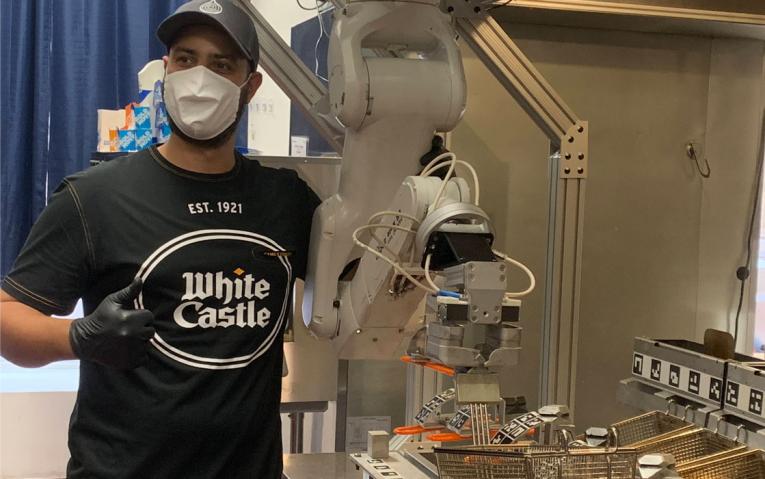 White Castle has 10,000 or so employees, and expects the device to empower their roles within the restaurant.

“There’s so much enthusiasm and excitement around the fact here we are, in the grand scheme of things, we’re not a multi-global chain—we’re a family owned business of 365 restaurants, but we’re able to be nimble and pride in terms of being able to be first,” he says. “This is one that’s we’re excited to be the first on board with a big investment like this and we think it’s going to be pay great dividends for the team and also our customers.”

Miso Robotics introduced the prototype for Flippy ROAR in January based on feedback from quick-service operators. The goal was to move Flippy to an upside-down rail. It can now be installed under a standard kitchen hood, where Flippy moves along a line of kitchen equipment, out of the way of other cooks and employees.

Essentially, the result is a zero-footprint product that lowers the cost of automated kitchen equipment. Jordan says it runs roughly $30,000 and Miso Robotics is working to bring the price down and make it available at no upfront cost to restaurants. It can be installed in a day, ideally during a nightshift.

This past year, Miso Robotics’ Flippy was in multiple CaliBurger locations and at Dodger Stadium and Chase Field, home of the Arizona Diamondbacks. The company said it served up more than 15,000 burgers and north of 31,000 pounds of chicken tenders and tots. Flippy evolved to cook more than a dozen types of food, including chicken wings, onion rings, popcorn shrimp, sweet potato waffle fries and corn dogs.

Jordan says Flippy isn’t automating how to make French fries, per se; it’s automating how a human chef’s arm moves. The new rail allows for a mobile experience that can shift between roles. Burger flipping one moment, prep work the next.

“And we’ve found that whenever we put our system into a kitchen, the workers tend to love it because now all of sudden they’re working with really high-level technology with high-tech equipment that makes life a lot easier,” he adds. “They’re running an iPad. They think it’s pretty cool. And what an amazing environment for an entry level worker to be in.”

White Castle says the pilot will look at speeds in production, taste, quality, and operational optimization with backend point-of-sale integration. Flippy ROAR will see if it can improve employee and food preparation.

Richardson says initial focus will be on running the fryer, making French fries, onion chips and rings, cheese sticks, chicken wings, and frying breaded fish and chicken for sandwiches. It won't prepare White Castle's beef sliders, which would be difficult to automate. The chain famously “sets the grill,” putting down a bed of onions and placing beef on top.

Jordan adds Miso Robotics works with PathSpot, a company that makes hand scanners to monitor handwashing effectiveness and frequency, and PopID, which can scan to make sure employees don’t have fevers when they’re operating the device. This way there’s no concern over whether or not Flippy is COVID-condition ready.

Richardson jokes it “has been a long interview to hire Flippy,” as White Castle prepares to market the move. But the first directive is to be open with employees and share steps along the way. He isn’t sure, categorically, what influence Flippy will have on consumer confidence, but he’s hopeful.

“We’ve been consistently focused on innovation,” Richardson says. “I’d say the last four or five years we’ve really concentrated a lot on creating the kitchen of tomorrow today. So when we learned about Miso Robotics and Flippy, that conversation got started. And we’ve been real impressed. It’s been a great partnership. And we’re excited to take it to the next step.”

“White Castle is an industry innovator, and we take a great amount of pride in our history – never forgetting about the future ahead,” added Lisa Ingram, fourth-generation family leader and CEO of White Castle, in a statement. “With 100 years of quick service success, the time has never been more perfect to envision what the next century of White Castle and the restaurant industry looks like. Miso Robotics understood where we could improve and stay true to White Castle’s brand of taste, innovation and best-in-class dining. A great customer and employee experience is in our DNA, and we are thrilled to bring the future into our kitchen with solutions that will transform the industry and make the White Castle experience all that it can be for generations to come.”