It Keeps Growing and Growing

Quick, widespread growth was an instant priority for Moe’s Southwest Grill. “It was very much a shotgun approach,” says Paul Damico, brand president. With more than 400 stores and plans to open 100 per year for the next 10 years, expansion is still important to the concept. The approach, however, is more strategic.

“Our goal is to build the 92 core markets where we already have TV marketing until they’re at maximum media efficiency,” Damico says. Here’s a look at Moe’s entry into what became some of its key markets.

Charlotte – 2001 The first Moe’s opens outside of Georgia.

Jacksonville – 2002 The Moe’s franchisee with the most locations (17) opened the first store here.

Knoxville – 2004 As growing excitement over fast casual and southwestern food drove interest in the brand, Moe’s opened its 100th store.

Toronto – 2007 The first international location opened. Turkey is the next foreign market for Moe’s, with the first of 40 planned locations scheduled to open this month. 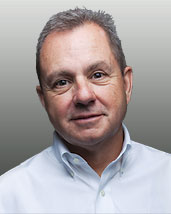 On May 7, 1985, Dennis K. Marlin did more than celebrate his 35th birthday. He founded communications company Marlin Network, for which he’s still the CEO. After 25 years of working with big names like Starbucks, he’s learned a few things about quick-serve success.

Put up your guardrails. “Make sure you keep sight of where you came from and what your concept was originally based on. Sometimes companies lose their rudders trying to compete with other brands. Others understand exactly why they exist and are successful because of it.”

Look for creative opportunities to enhance your image. “A lot of times we get so attached to core menu items that we don’t see opportunities to change our image with a new offering. A chicken sandwich may not turn out to be the No. 1 seller at a burger place, but it can help customers see the brand in a new light.”

Size doesn’t matter. “Some large companies aren’t very attuned to the marketplace, and some smaller ones are. You don’t have to be the biggest company to be the most successful—you just have to offer the solutions that meet the consumers’ needs.”

“We wanted to go back to our roots,” says Michael Shumsky, CEO of CiCi’s.

The promotion was originally slated to run for two weeks. But sales were so phenomenal that CiCi’s brought it back for another round.

“We took a two-week break and then had another two weeks of $3.99 buffets,” Shumsky says.

Anniversary promotions reward existing customers and attract new ones, but the more popular the discount, the more difficult it can be to get consumers to pay the prepromotion asking price later.

“To help ease the transition after the promotion, we added an Italiano Thin Crust pizza to the menu and marketed that,” Shumsky says. “That way customers weren’t coming back to a normal $4.99 price point, they were coming back with a new component added.”

Shumsky says customers have responded well to the new offering—despite the price increase.

“There’s not a lot of buffet competition out there, and we provide a great value at a great price,” Shumsky says. “It’s a powerful premise.”

Shortly after the original 3D “Eat Mor Chikin” billboard went up in Atlanta in 1995, customers called Chick-fil-A to say how much they liked it. “They found it very funny and unexpected, and that’s really the crux of the idea: Cows acting in the interest of self-preservation encouraging us humans to eat chicken instead of beef,” says Rod Ulrich, principal at the Richards Group, Chick-fil-A’s creative agency. The cows have been featured in various forms since then.

Cow Calendars “We always want our calendar to be fresh and irreverent. For 2011, the theme will be the cows of reality TV.” —Mary Clancy Peak, manager of advertising and campaign, Chick-fil-A

Continued Billboard Marketing “In new markets we start with the basic ‘Eat Mor Chikin’ message, but the Atlanta market has seen the cows for 15 years. We can play with the campaign a little more there.” —Mark Baldwin, senior publicity consultant, Chick-fil-A

Social Media “At one point, the cows had more fans on Facebook than Oprah did.” —John Keehler, principal, digital strategy, the Richards Group

Cow Appreciation Day “Last year we had close to 400,000 people dress up like cows to get a free meal, and it wasn’t just kids. People just love the campaign and our food.” —Mark Baldwin, senior publicity consultant, Chick-fil-A

Almost 18 percent of Jamba Juice’s 745 stores are nontraditional. “It’s a great way of creating more brand awareness and reaching customers where they are,” says Thibault De Chatellus, senior vice president of franchise and development at Jamba Juice. Check out his top tips for nontraditional locations.

Have a flexible footprint: “Some of our campus locations are in a large format and have the same seating as a traditional store. Others are very small kiosks that rely on existing seating at the venue. You can’t necessarily build a prototype store.”

Streamline operations: “We’ve adjusted training practices, reduced the menu items, and reduced the number of areas where prep and other procedures happen at our nontraditional stores. The simpler you can make your operation, the better the consistency of execution.”

Emphasize grab-and-go offerings: “The venues that typically have nontraditional stores are airports or colleges or grocery stores. People there want products they can consume while doing other things.”

Seek sites with heavy foot traffic: “You’ll probably find the lowest-revenue Jamba is a nontraditional store, and close to the top-earning Jamba is nontraditional. The thing that makes the difference is the level of traffic at the location.” 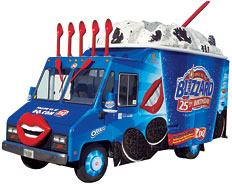 The ice cream treat has factored heavily into DQ’s national marketing calendar the past several years, but this year, the entire calendar revolved around the product.

“We asked ourselves, ’What can we do that would really turn the Blizzard-loving world upside down?’” Keller says. After months of brainstorming, a Blizzard Mobile that would make 75 stops in 25 cities and give out 100,000 Mini Blizzards was the answer.

“It became the basis for a huge social media campaign we’ve undertaken,” Keller says. “We announce all the events and activities for what we’re doing on Facebook.”

The Blizzard Mobile also helped introduce customers to the Mini Blizzard, which launched in August. The campaign’s gotten the buzz DQ hoped for.

How Well Do You Know Häagen-Dazs? 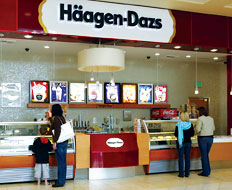 Häagen-Dazs is based on the same dedication to excellence that Reuben Mattus had when he founded the brand in 1960.

“Our philosophy is unchanged: Use the finest, all-natural ingredients, and craft them into the perfect balance of flavor and texture,” says Dawn Uremovich, president of U.S. Häagen-Dazs shops.

Test your knowledge of the brand’s 50-year history:

ANSWER KEY: 1. False: Store customers got a free scoop of ice cream on May 18. 2. C: Vanilla Swiss Almond was introduced later, and Raspberry Cheesecake doesn’t exist. 3. F: The line was created with the adult palate in mind. 4. A: Reuben’s daughter Doris opened the first store there. 5. False: It’s the number of ingredients in the ice cream. 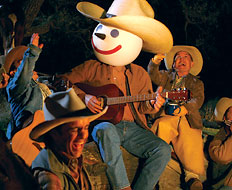 In the mid ’90s, an E. coli outbreak threatened to do irreparable damage to the Jack in the Box brand.

Enter Jack, a fictional CEO based on the drive-thru speaker clown the quick serve blew up in a 1980 commercial.

“He came back as this exec that was taking charge of the company and the brand and being a true advocate for consumers,” says Terri Graham, chief marketing officer of Jack in the Box.

In his first TV spot, Jack came back to the brand’s headquarters and blew up the boardroom to get revenge.

“It didn’t mention the E. coli incident, but it didn’t have to,” Sittig says. “The underlying message was reform.”

Fast-forward 15 years: Not only has the chain’s reputation recovered completely, but the concept has also experienced significant sales increases and nearly doubled in size. And the Jack’s Back campaign has picked up 10 Effie Awards for excellence in advertising.

“Jack is an integral part of our brand identity, and our guests absolutely love him,” says Linda Lang, the brand’s “other” CEO. “I couldn’t imagine sharing my job with anyone else.”

How Does He Stay Innovative After All These Years?

Q: Is it harder to find innovation in a company the size of Yum?

A: Our mission is to constantly listen to the voice of our customers, connect with them, and always reach for new innovations and excellence in everything we do. We have leading brands that are loved by customers around the world in 100 countries, but we’ve found ways to make a big company feel small.

Q: Does your marketing background help you be more innovative?

A: My marketing mantra for the organization is: “What consumer perception, habit, or belief do you have to either change, build, or reinforce in order to grow the business?” I think that when you truly listen to the voice of the customer and answer that question, you’ll have a home run.

Q: How much innovation are you seeing in the restaurant industry these days?

After learning that tens of thousands of people die every year from common bacterial infections because of resistance to antibiotics from meat consumption, Hans Hess decided to do something about it. It was time to create a nonfactory farm burger that was antibiotics-free. And in 2005, he did just that with the opening of the first Elevation Burger store.

“It was personal passion combined with a public health concern,” CEO Hess says about the founding of the chain. Aside from fond memories of searching for the best burger joints in town with his mother, “a lot of the inspiration came from just wanting to have a better burger … a clean burger that didn’t make my stomach upset.”

As organic and sustainable trends gain popularity across the nation, so, too, does the Elevation Burger concept. After five years in business and seven locations to date, the chain continues to expand, with more than 10 locations set to open this year.

No. 1 Cinnabon celebrates 25 years of sweets by launching a new cupcake line.

No. 2 To mark its 20 years as a leading chicken fast casual, Zaxby’s launches its Fanatic Video Contest online.

No. 3 It’s out with the old and in with a completely new pizza recipe at Domino’s to celebrate its 50th anniversary.

No. 4 Ten years of the White Castle Cravers Hall of Fame has helped rock musicians, movie stars, and even a Greek Orthodox priest earn the title.

No. 5 Tastee-Freez celebrates National Ice Cream day to ring in its 60th year as a dessert destination.

No. 7 Celebrating 15 years at Biggby Coffee means enjoying a 3 percent increase in sales over 2009.

No. 8 Togo’s Sandwiches is heading into its 40th year with a refreshed look—new logo, interiors, packaging, and uniforms.

No. 9 Fifteen years and more than 500 restaurants later, Qdoba is hosting local promotions to celebrate its success.