Dunkin’ Donuts next generation store, fittingly, made its debut in the same city where the brand opened its first location nearly seven decades ago. Only this time, one key detail was absent: the word “Donuts.” The new restaurant, at 588 Washington Street in Quincy, Massachusetts, is the second location showcasing just “Dunkin’” on the front. The other opened last summer in Pasadena, California.

Dunkin’ said it’s hoping to reinforce its standing as a beverage-led brand with the move. While “Donuts” might be absent, this concept is stocked with several firsts for the chain, including a drive-thru lane dedicated exclusively to mobile ordering. Dunkin’ said this allows DD Perks members who order ahead via the chain’s mobile app to bypass the ordering lane and merge straight into the line for the pickup window. Dunkin’ claims to be the first national restaurant brand to offer a drive-thru lane specifically for mobile ordering. Back in October, Dunkin’ said its mobile ordering platform, which launched a year ago, now comprises about 3 percent of all transactions. 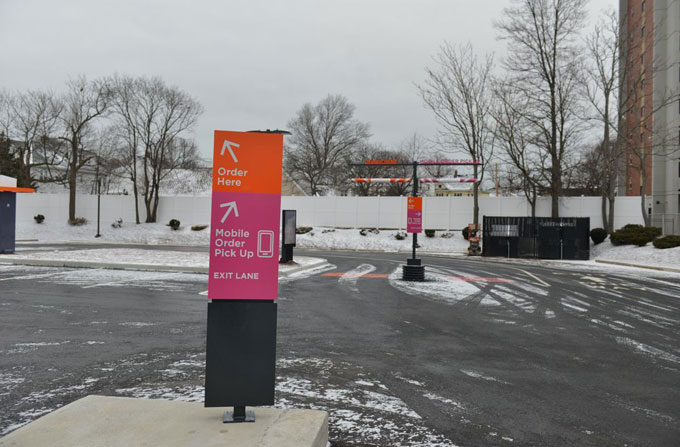 Dunkin’ is taking aim at its coffee competition with this innovation, hoping to boost convenience and speed of service for loyalty members. At Starbucks, mobile order and pay reached 10 percent of all transactions in the U.S. in the fourth quarter, and membership in Starbucks Rewards increased 11 percent, year-over-year, to 13.3 million active members, with member spend accounting for 36 percent of U.S. company-operated sales.

“The launch of our next generation concept store marks one of the most important moments in Dunkin’ Donuts’ growth as an on-the-go, beverage-led brand,” said Dave Hoffmann, president of Dunkin’ Donuts U.S. and Canada in a statement. “We have worked closely with our franchisee community to create a positive, energetic atmosphere for our guests that remains true to our heritage, while emphasizing and enhancing the unparalleled convenience, digital innovation, and restaurant excellence that distinguishes Dunkin’.”

Another fresh detail is the location’s tap system, which serves eight cold beverages, including coffee, iced tea, cold brew, and nitro infused cold brew. There will also be espresso machines so employees can make handcrafted drinks to order. A single-cup machine will enable the option of grinding and brewing select coffee varieties one cup at a time. 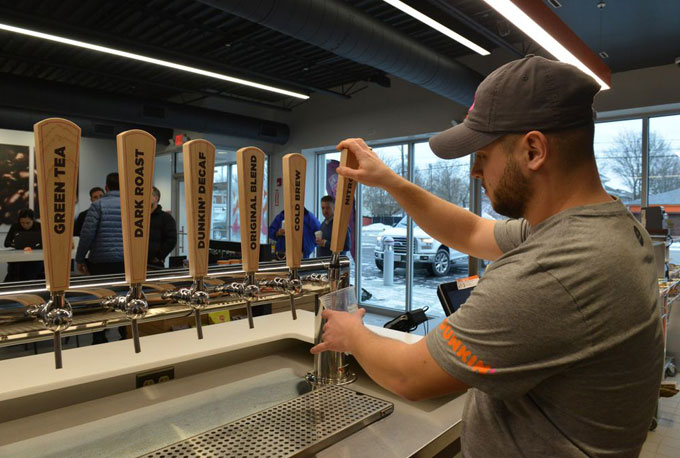 Continuing its push toward ease-of-ordering, the new Dunkin’ store has an area dedicated to mobile pickup so rewards members can place an order via the mobile app and pick up without waiting on the regular line. Guests can also track the status of their orders inside the restaurant with a new digital order status board. An expanded, custom grab-and go unit will feature bottled beverages, as well as snacks to complement the menu, including bananas, oranges, grapes, fruit snacks, Yoplait yogurt parfaits, and other packaged goods.

Inside, employees will don new uniforms designed by Life is Good. Messaging on the new T-shirts features branding such as “Fueled by Positive Energy,” and “Drink Coffee. Be Awesome.” 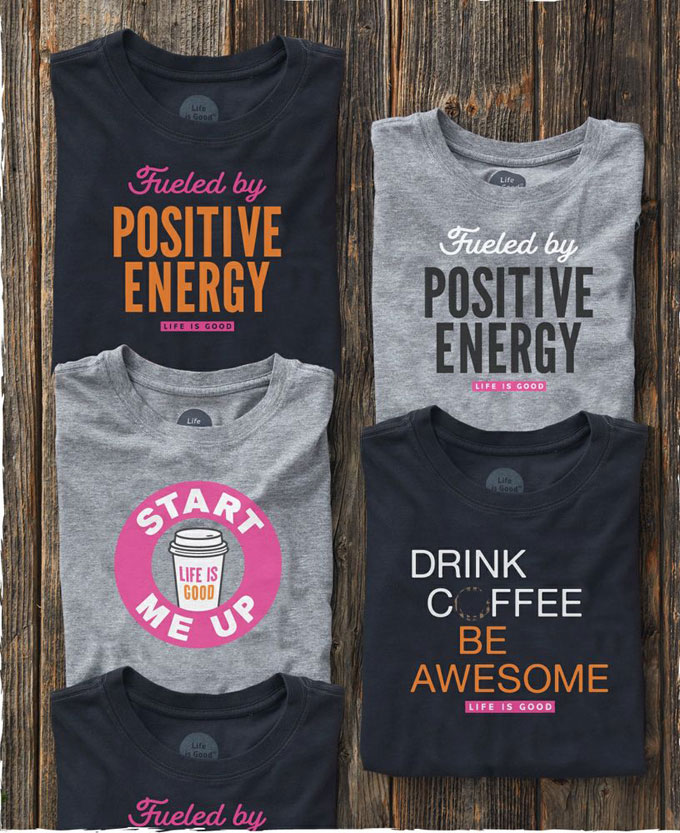 The 2,200-square-foot store is located about a mile away from the original Dunkin’ Donuts and is the first of 30 or more new and remodeled stores that will test variations of the design. Once testing is complete, Dunkin’ will unveil its final new store design, the company said. Dunkin’ has more than 12,400 restaurants in 46 countries worldwide.

“We are thrilled to begin the New Year with such an exciting milestone for our brand, and look forward to rolling out Dunkin’ Donuts’ store of the future to our guests in all of our communities,” Hoffmann added.