Customers who order will be able to see the location of their order and delivery driver on an interactive map.

Domino’s continues to jostle for share in a tightening delivery space, but it hasn’t wavered in direction. While aggregators and other entrants ramp up marketing and promotional incentives, the top-earning pizza chain is leading with technology. The “long-game journey,” as chief executive Ritch Allison said in July.

Here’s one staggering reality: Of Domino’s 1,000 or so corporate employees, about 600 fall into the IT department. It’s a multi-year bet the company believes will leave it standing tall when the delivery “shakeout” arrives, Allison said.

It boils down to segment disruptors and the elasticity of demand in third-party delivery—something we really don’t know that much about. “This is not an industry that starts with 40 percent profit margins typically,” Allison said earlier. “There is not a lot of room for some of these players to cede margin to a third party on one end, while labor costs are going up on the other.”

In truth, it’s guess work concerning how customer behavior with third-party is going to evolve. As cost gets passed on to the guest in the absence of free deals to trial, what will ultimately happen to spending habits?

In Allison’s view, nobody knows. Yet with pizza, there’s decades of history to pull from that suggests lasting demand. And because they’ve long built—and in Domino’s case fortressed—real estate to meet this customer, there’s more flexibility in the current system.

Domino’s has roughly 6,000 U.S. stores where franchisees have the ability to set their own prices for delivery charges and menu items. “Once the cost to get food delivered to you has to fully support the effort that it takes to get it there—only then will we know ultimately where this thing falls,” Allison said.

It’s the age-old question of product and platform introduction for restaurants: Will the same number of customers use third-party delivery when they have to pay for it after the deals run out?

“If you offer to mow my lawn for free, I’m going to say yes. When you come and charge me for it, I might just go out there and push the mower around myself,” Allison quipped.

The labor element is essential to weigh. It’s one reason some pizza chains are dealing with closures in markets where wage rates are climbing. That’s why Domino’s is shrinking down the radius of delivery territories despite the cannibalization effect. This “fortressing” path aids wage rates by improving, over time, the number of deliveries per driver, per hour, Domino’s franchisees can leverage.

The chain expects to fortress seven corporate markets completely within the next three years—a move that will admittedly drag same-store sales. Again, though, it’s a long-term concept. And it goes back to the beginning of the debate. By fortressing, Domino’s reinforces strengths it hopes will influence delivery users to pick pizza over third-party: Better service, times, and a value proposition that doesn’t require as much of a financial tradeoff from guests.

In Lewisville, Texas, for example, Domino’s fortressed with three stores and the worst-performing unit averaged 16.5 minutes for delivery with zero orders over 45 minutes, the company said. 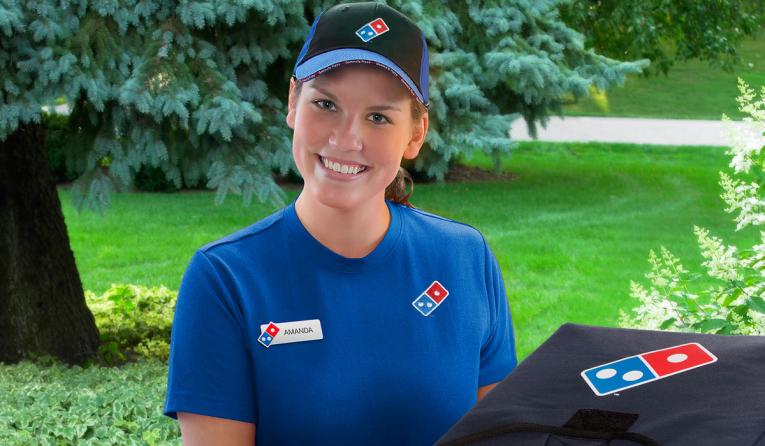 The wage rate equation for drivers is a critical element at play for Domino's.

It’s also no secret why Domino’s latest campaign centers on “delivery insurance,” or the concept that the chain cares more about quality. Allison said it’s a message that puts “our money where our mouth is,” and allows for real-time feedback at the store level.

Fortressing is a carryout strategy as well, and Domino’s added variety to its $7.99 carryout deal to drive orders and ticket to the segment, which is approaching 45 percent of total domestic orders. It then unveiled a 20 percent off late-night deal to combat further third-party intrusion. Domino’s had never tried incremental value dedicated to the 9 p.m. and later daypart—where aggregators enjoy heavy volume.

GPS tracking is ready for its close up

That 60 percent employee IT split? They developed a GPS delivery tracking system in-house that tested throughout 2019. By October, it was in place in a combination of 400 corporate and franchised stores across the U.S. after an Arizona pilot in late April, when Domino’s tried it at 27 corporate stores throughout Phoenix. Operators could purchase the system at an undisclosed cost.

And it appears they are.

Domino’s announced Monday morning that about a quarter of locations nationwide will have it in place by the end of the year, which is fast approaching. “A significant portion” of the remaining stores are expected to have GPS delivery tracking available in 2020, the company added.

"We know that customers love Domino's Tracker and the ability to monitor their orders in the store. Now they will also be able to watch their orders on the way to their house with our delivery tracker," said Dennis Maloney, Domino's senior vice president and chief digital officer, in a statement, "Customers are not the only ones who love the technology—store managers and delivery experts do as well because of the transparency it provides and how it improves the delivery experience for everyone." 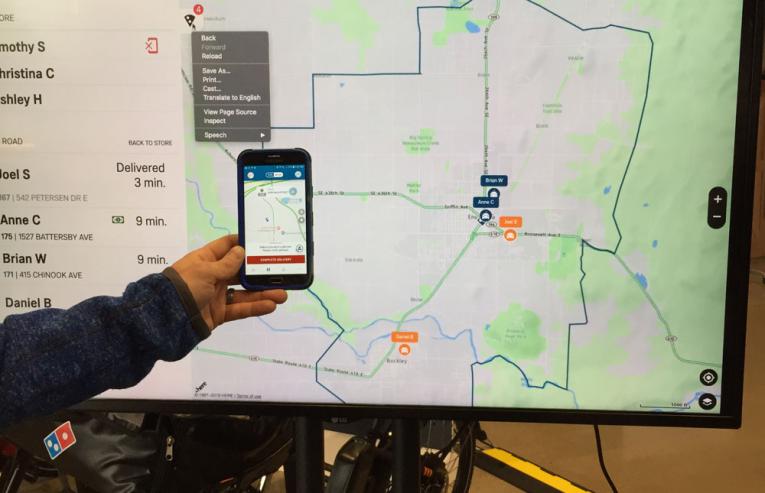 Domino's GPS tracking system is ready for a broad rollout.

The system’s customer-facing benefits are clear. Guests who order from stores with the technology can see the location of their order and “delivery expert” on an interactive map found on their order confirmation page. After consumers order, they receive an estimated delivery time and can opt into text notification that let them know when their order is on the way, when it’s about two minutes away, and when it has arrived.

But notably, it provides back-end fixes for Domino’s, too. Store managers view where their drivers are out on the road, making in-restaurant logistics easier to manage. Drivers themselves benefit from optional navigation, one-touch customer callback capabilities, and customers who are better prepared to meet them when they arrive.

Once more, this makes in-roads in the share battle with third-party leaders. “[Customers can] track their food delivery driver right now. Aggregators have that capability and we’re rolling that out. But the cool thing that we have is … this actually shows you as a manager or team member inside the store where your drivers are, and it gives you information so you … can make decisions to get them back on the road quicker. If you know where people are and when they’re approaching, you can be ready,” director of delivery Mike Grange told QSR in October.

At the core of the software is a driver app that tracks location and provides a call button for the driver to contact the customer with updates. With the system, customers can also call a driver directly for the status of their order instead of calling the store.

Domino’s is working on several other levers, like self-driving cars, e-bikes, artificial intelligence and voice ordering (the brand is testing the ability to take phone orders in 40 stores), along with a host of under-wraps initiatives. But regardless of what happens, Allison has continuously said, the company will not bring in third-party companies to aid the process.

“We’ve got a tremendous customer base and data set already. I just cannot imagine why we would want to give that a competitor. And let’s be very clear, these aggregators are ultimately competitors of the restaurant companies that they serve,” Allison said earlier.

Domino’s U.S. same-store sales climbed 2.4 percent in the third quarter that ended September 8. It marked the lowest figure in seven years (Q2 2012). Domino’s international division upped comps 1.7 percent. Despite the relative slowdown, the chain has put together 34 consecutive periods of domestic gains and 103 on the international side. Additionally, Domino’s opened 214 global net stores in Q3, including 40 in the U.S. The brand has brought 1,174 restaurants to market over the past 12 months.

Papa Johns Won't Get in a Discount War with Pizza Competitors
Starbucks Taps into a Cold Coffee Revolution
The 2022 QSR 50: The Industry's Leading Annual Report

For Noodles & Company, Change Begins from the Inside Out
Encinal Brands Latches Onto Soaring Mexican Food Segment
Is Sustainability the Future of the Restaurant Supply Chain?