Headed into 2023, the future of virtual kitchens is becoming more fact than apparition.

Technology | January 9, 2023 | Gary M. Stern
C3
Sam Nazarian, founder and CEO of C3, started virtual kitchens in 2019 because, “We saw an opportunity to bring added revenue to underutilized restaurant kitchens and real estate space.” He describes his goal as “reimagining the foodservice industry.”

When the pandemic arrived in March 2020, and consumers stopped dining indoors, a movement in the restaurant industry gained speed that’s led to an expanding number of ghost and virtual kitchens.

Restaurants began to depend on central facilities to fulfill takeout and delivery, and to deliver off-premises demand through lower-cost means. Virtual kitchens served as replacements for indoor dining, enabling entrepreneurs to open at a fraction of the cost of building and developing a stand-alone restaurant.

Why spend half a million dollars to develop a brick-and-mortar outlet when you could launch a ghost or virtual kitchen for about $50,000, or a fifth the price? In addition, restaurateurs can stack seven or eight takeout eateries, as hospitality firm C3 does when it clusters several of its brands—Umami Burger, Sam’s Crispy Chicken and Krispy Rice—into one virtual kitchen facility, cutting costs and reducing staff.

Several companies flourished such as Kitchen United and REEF Kitchens, expanding at a crisp pace. But there have been roadblocks. Butler Hospitality, which was created in 2016, raised $50 million in funding, and provided room services to numerous hotels from central kitchens, shuttered in July 2022.

Now that the pandemic has mostly settled and customers are venturing back inside restaurants, how are these enterprises faring? One expert says growth has stabilized, but several of these ghost kitchen organizations have garnered considerable financial investors and keep growing despite the dine-in boom.

Without a doubt, the pandemic fostered the growth of virtual and ghost kitchens, underscores Lee Schulman, president of Atlanta-based Panacea Management Group Consulting, a restaurant advisory firm. “When all of a sudden, people couldn’t dine out, with the expansion of delivery, it allowed independent operators [via ghost kitchens] to reach the people that formally were coming to them but couldn’t or wouldn’t,” he says.

MORE: What's the Next Wave of On-Demand Restaurant Delivery?

Schulman called it a “feeding frenzy” because growth was so rapid. “Everyone has a phone in their hands. People had access and it was easy to order,” he says.

Since the pandemic ebbed, Schulman says there has been a “reset.”

“Things have shifted because dining-in is back, though delivery is here to stay. People can dine out now, and they want to dine in with their friends and family,” he says.

Many startup restaurateurs “aren’t ready to go brick-and-mortar; they don’t have the reputation or financial backing. But you can get your feet into the water [with ghost kitchens] at minimal cost, and discover ways to see if the consumer demand or desire is there. It offers exposure,” Schulman says.

Yet only a minority evolve from startup ghost kitchen to full-steam retail storefront. Schulman estimates only about 20– 30 percent move into stand-alone eateries. But some turn into brick-and-mortar locations such as Citizens at Hudson Yards in New York City and Burger Dandy in Franklin, Tennessee.

Schulman adds many ghost kitchens don’t carry the extensive menus of in-dining eateries based on their tight kitchen layouts. Hence, they specialize in a “limited number of menu items that allow cross-utilization of ingredients,” he says.

Established brands open ghost kitchens as well. In Schulman’s own Piedmont Park area in Atlanta, Wendy’s opened in a REEF Kitchen trailer ghost kitchen that enables them to get into a neighborhood, at low cost, and extend their reach. “It’s like a micro market,” Schulman says.

Ghost kitchens have carved out a place, but Schulman believes “hospitality is still a touchy/feely business, and restaurants are here to stay. There’s a social aspect to dining out, and many people want to go someplace else, and not have everything delivered to their door.”

Yet Michael Montagano, the Pasadena, California-based CEO of Kitchen United, sees a bifurcation that could exist in tandem. “I don’t think going out to dinner and ordering in are mutually exclusive,” he says. During the pandemic, Montagano says, many people started ordering in at a higher frequency. And it’s turned into a habit. “Now, they’re consuming the cuisine they like wherever and whenever they want it, and that happens to be in the convenience of their home,” he says.

Kitchen United also secured $100 million in investment in July from Google Ventures, Kroger, Simon Property Group—a raise that will enable it to “continue to expand its footprint, improve its mature tech stack, and making the economics of delivery work for everyone including restaurants and consumers,” Montagano says.

As of press time, Kitchen United expanded from four locations in 2020 to 14 facilities in five states. It derives revenue from a monthly rental fee and a percentage of sales coming from its channels. When it debuted, it gravitated to aligning with established chefs, since they are more likely to succeed than startups, Montagano says. But recently, it expanded with local brands and upstarts such as The Impossible Shop and Pardon My Cheesesteak and established names such as Grimaldi’s and Hawaiian Bros. 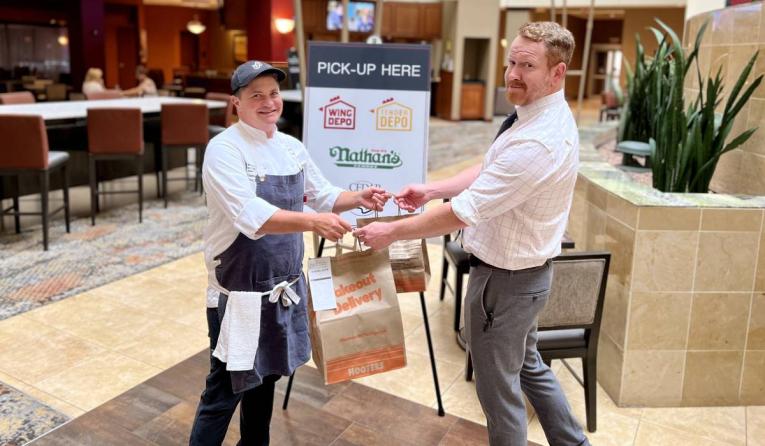 “Ordering in has replaced going to the grocery store and making your own food. It hasn’t replaced dining out or its quality of food and added service,” says Rishi Nigam, CEO of Franklin Junction.

Thinking innovatively, Kitchen United reached a strategic partnership with Kroger that led to its opening inside locations, in two supermarkets in Dallas and one in Houston. Montagano notes, “Kroger locations are ideally located for easy pickup or delivery, and it’s a great made-to-order food offering for Kroger to bring to its customers. Their guests can pick up groceries for the week and dinner tonight.” It also aligned with one Ralph’s supermarket in Los Angeles.

Sam Nazarian, founder and CEO of C3, started virtual kitchens in 2019 because, “We saw an opportunity to bring added revenue to underutilized restaurant kitchens and real estate space.” He describes his goal as “reimagining the foodservice industry.”

Nazarian’s virtual kitchens yield “added efficiency. Staff are cross trained to prepare menus from all C3’s brands and our menus feature shared ingredients between brands.” He says his partners can generate $1 million per kitchen.

The pandemic taught C3 that “ordering is here to stay. We found that when brick-and-mortar restaurants re-opened, delivery orders were only impacted for a short period of a week or so,” Nazarian says. “The pandemic helped make ordering common place.”

Always thinking out of the box, Nazarian sees growth in the future working in partnerships with top digital creators, YouTubers and gamers, such as Matt Stonie with Stonie Bowls, a collection of poke, salad, and rice bowls. He’s also licensing C3’s brands in airports across the country.  He projected to have more than 1,000 digital brand locations by end of 2022.

Also in the vanguard was REEF Kitchens, which started out as a Miami-based parking lot company focused on ways to “making parking lots more efficient in their neighborhoods,” says spokesperson Mason Harrison. And that came to include developing ghost kitchens on their land. As far back as 2016, it launched a ghost kitchen in a carpark in London, which then developed into REEF’s operating the kitchen and restaurants of many startup chefs and operators.

Knowing how real-estate costs usually constitute about a third of operating a restaurant, REEF recognized curtailing those fees gave eateries a much higher chance of succeeding, Harrison says.

So DJ Khaled, well-known record executive and producer, could inaugurate 150 branches of Another Wing, which specializes in wings, jerk chicken, and fried snapper, through REEF; all of which were digital ghost kitchens, opened at a cut-rate cost compared to brick-and-mortar units.

REEF operates its restaurants and functions like a franchisee, paying royalty fees. It began with in-house brands and then created its own concepts such as Rebel Wings and American Eclectic Burger.

Despite the fact that the pandemic is subsiding, REEF’s ghost kitchen business continues to have a place in the industry’s trajectory, Harrison says. “Delivery became a need to have, not a nice to have,” he says.

“Ordering in has replaced going to the grocery store and making your own food. It hasn’t replaced dining out or its quality of food and added service,” adds Rishi Nigam, CEO of Atlanta-based Franklin Junction. 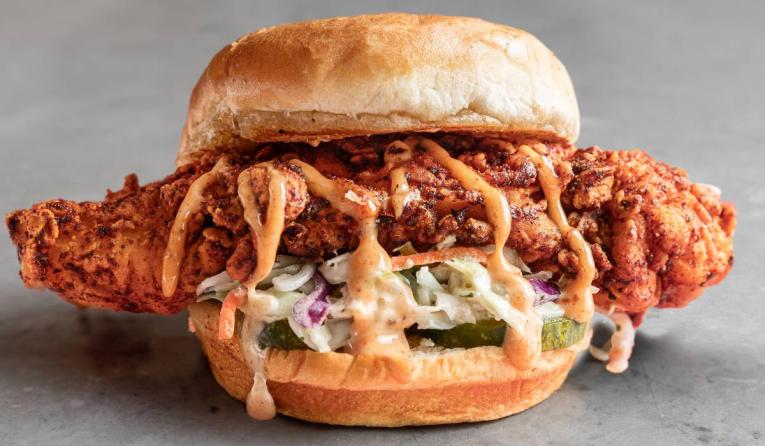 Cowboy Chicken debuted a spin-off, Smackbird as a ghost kitchen, to generate a new revenue stream.

Franklin Junction calls its product, “host kitchens”—versus ghost—which work with existing brands, restaurants or hotels, and helps them create a secondary brand for delivery only, adding incremental revenue. They already have their existing kitchen, don’t need to invest any new capital, and Franklin Junction serves as the licensee, owning the sales, the listing, driving the promotions, and doing the accounting.

The company provides “the tools for existing restaurants to optimize their infrastructure to capture incremental digital business, primarily take-out and delivery,” Nigam says. Franklin Junction operates more than 1,000 restaurants domestically and over 500 internationally.

It focuses more on established brands, such as Hooters, Nathan’s and Arthur Treacher’s Fish & Chips. “That ensures greater likelihood of consumer-demand,” Nigam says. It has partnered with early stage restaurants on select occasions as well.

Frisch’s Big Boy was one of Franklin Junction’s earliest partners. The host kitchens helped it forge into new areas and broaden exposure.

In regard to how the post-pandemic rise of dining affected revenue, Nigam says, “There’s a lot happening in the industry now including relaxing of pandemic restrictions and inflation, but we see the convenience of digital ordering, delivery and pick-up to be long-term shifts.”

But it’s not only larger companies opening ghost kitchens. Take Cowboy Chicken, a Dallas-based fast casual of 18 locations (seven of which are company-owned), specializing in wood-fired rotisserie chicken. In November 2020, when the pandemic was still at its apex, it debuted a spin-off, Smackbird as a ghost kitchen, to generate a new revenue stream. It’s now available at four Cowboy Chickens.

It devised a different menu consisting of $10 chicken sandwiches, chicken tender meals, family packs and side dishes such as mac n’ cheese “to appeal to a younger, more adventurous demographic than Cowboy Chicken,” he adds.

Kennedy acknowledges that as the pandemic lightened revenue dipped. “But we are confident that we can continue to grow sales in digital channels,” he says. To optimize sales, the brand is extending visibility on third-party platforms, continuing a strong social media campaign, and working with Yelp and Google to build awareness.

Consultant Schulman expects ghost kitchens will continue to thrive, though their expansion has reached a steady, not insistent pace. Some may offer commissaries to feed all of their local ghost kitchens to curtail rising labor costs and difficulty staffing-up.