Will a Restaurant Labor Shortage Usher in an Era of Robotics?

Thanks to COVID, the industry might just be on the cusp of widespread automation.

The use of robotics and automation in the service industry has been floated around as a possibility for years. From self-driving delivery vehicles to kiosks that remember orders, thoughts about automation and robotics replacing workers has hovered over the sector, with glimpses here and there of what might be coming. This type of artificial intelligence and technology isn’t new—countries like China, Japan, and South Korea have been utilizing automated service bots for years.

But it remains evident there still isn’t consensus among industry leaders about how much of a role these technologies will play in the future of kitchens and restaurants. Some believe operators are headed toward total automation, particularly in the fast-food arena. Others believe we’ll only see limited use of AI and self-operating machines (think a robot that flips burgers or robotic “waiters” who bring pizza to the table).

Automated machines that create gourmet, chef-inspired burgers, robotic arms that fry up French fries without running the risk of getting a nasty grease burn, and intelligent pizza machines that pump out 10-inch pies in the Neapolitan style, are all either in the works or on the market currently, which leads to a suddenly present reality: The age of robotics in restaurants has arrived. It’s no longer a matter of when restaurants will see a transition, but rather how fast it happens.

“We’re not in the phase of ‘we hope it works,’” says Jacob Brewer, chief strategy officer of Miso Robotics. “We know it works. We’re in the growth phase. The future is here.”

Miso Robotics is, as Brewer describes, a company with a “fundamental foundation in AI machine learning that has birthed into this intelligent automation platform.”

Miso is also the company behind “Flippy,” an automated robotic arm working the fryer at select White Castle locations. Like others in the AI and robotics field, Brewer is a believer in technology that makes life easier and safer.

In this instance, it means making the restaurant kitchen a safer, more stress-free environment that frees up duties for hourly employees.

“The focus for us is really looking to make things like dangerous, dirty, and dull tasks, things that are highly repeatable in the restaurant [easier],” Brewer says. “So, we kind of focused on these key low-hanging fruit areas in the kitchen that desperately need automation and intelligence.”

Brewer says AI and robotics can be used in tandem with traditional kitchen setups. Rather than looking to replace workers entirely, he says, the right technology can make tasks that once seemed impossible more than manageable. CookRight, Miso’s AI vision platform, takes aim at this.

“Imagine someone is working a grill and it’s peak time on a Friday,” Brewer says. “There are 45 steaks, seven chickens, a fish entrée, two burgers made two different ways. No human is able to manage this grill and time everything perfectly. It would take years to train a person to get close, and even then, they probably aren’t doing it very well because of how complicated it is. This is where our CookRight platform comes in. It has two cameras facing the grill and a 10-inch tablet that says when to flip something or when to add cheese. You don’t have to train anyone for 18 months to use that.”

Brewer adds benefits of this type of AI go beyond efficiencies for the restaurant. Although that’s necessary, given the ever-increasing demands of customers, technology also provides a boost to workers. When employees don’t have to worry about making errors that could lead to reprimand they’re likely to be more relaxed, which leads to better performance. It also drives higher retention rates, saving restaurants money in the long run, while maintaining good chemistry in the kitchen.

“It allows you to meet the customer need and demand,” he says. “We should be pushing ourselves forward as a society, and this is one of the pieces that needs to help us get there.”

Companies like Miso are more focused on providing supplemental assistance in restaurants and kitchens rather than automating the entire process, whereas other players in the space, like Piestro and Creator, are looking to disrupt foodservice entirely.

Piestro, a robotic pizzeria that recently partnered with fast casual 800 Degrees Pizza, is like something you’d see out of The Jetsons.

The technology, which is still in the startup phase, allows for customers to create and customize Neapolitan style pizza with a few buttons and zero human interaction. Outside of needing a human to restock the machine with ingredients, the process is completely automated.

Massimo Noja De Marco, CEO of Piestro, is about as well-versed in the hospitality business as one can be. With international experience running hotels and opening restaurants, De Marco knows better than most what trends are simply that, and which are here to stay.

The issue of labor and how automation will affect it is a major concern for opponents of sweeping automated changes to the labor force.

Criticisms often include the notion that automation will reduce the number of available jobs in favor of larger salaries for those who lead companies. De Marco doesn’t see it that way. He echoed Brewer’s sentiment about technological advances in the workforce being more beneficial to the worker than harmful.

Not many inventions in the food space are more futuristic than a completely automated Neapolitan-style pizza machine. But there is at least one creation that rivals Piestro’s innovation.

Creator, which is more of an experience than a singular machine, is a culinary-robotics organization based in Daly City, California (right outside San Francisco) that offers customers a unique dining experience, one automated and customized to the tilt.

More specifically, Creator offers customers 100 percent customizable gourmet burgers, and like Piestro, the machine runs the whole operation, aside from needing a human to restock supplies.

Fresh meat is ground and seasoned by the machine and customers watch as their creations are “plopped on a baked-that-day bun, and covered in sauces measured by the millimeter and spices by the gram,” the company says.

What makes Creator particularly differentiated is the platform the machine operates from. By using an app, Creator gives agency to the user, which allows for an ultimate personalized meal. 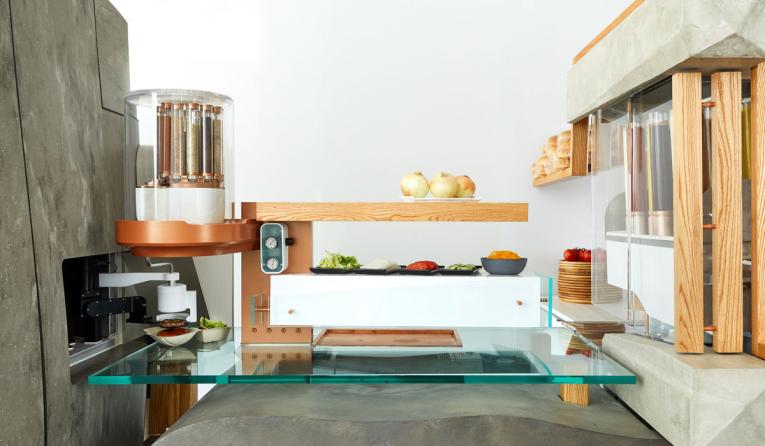 "It’s like creative control and culinary excellence and a discovery process all through automation,” says Creator CEO Pehr Luedtke.

“What it means is you can create your own perfect burger customized down to the millimeter,” CEO Pehr Luedtke says, “until you get your perfect creation. The software [app/platform] plus hardware [burger-robot] allows us to manifest both chef’s dreams, but also put those same tools that chefs have had for a long time into the hands of guests. It’s like creative control and culinary excellence and a discovery process all through automation.”

Perhaps the most stunning note about Creator is the burgers start at $6. How can a burger-robot that spits out gourmet items using locally sourced fresh ingredients not break the bank? It comes back to labor.

Luedtke says because Creator doesn’t need to employ more than a few workers to restock the machine and make sure everything is running smoothly, the company can focus more on bringing fresh, gourmet food to the masses. Having a non-traditional kitchen that doesn’t require typical hardware and space (ventilation, prep areas, room for multiple cooks) is also beneficial and plays into the low cost of the end product.

Although there is only one Creator location currently, the company expects to expand to other parts of the country in the near future, though growth will be a little more challenging since Creator is essentially developing an entirely new space in the industry, compared to traditional modes such as company-owned chain restaurants or franchises.

Creator and Piestro are still in the beginning phases of what they hope will be a long life in the restaurant world, while Miso has its foot firmly in the door.

One thing they share in common, however, is all three companies believe wholeheartedly robotics and AI aren’t just a flash in the pan.

“We are in it, but we are just at the beginning,” De Marco says about where on the automation timeline restaurants are. “We’re really at the point of no return, we’re going to move more and more into that direction.”

Emily Williams Knight, CEO of the Texas Restaurant Association, shares a similar point of view. She says the chatter around robots and AI has been mounting for at least five years, but the labor issues restaurants currently face, coupled with technology that’s now more affordable, has accelerated the desire to automate.

“I absolutely think it is one component to solving not just rising labor costs but also the continuous labor shortage,” Knight says. “I think COVID created an opportunity for people that were ready to take the leap to make the leap. You have a lot of private money coming into the space now and a lot of technology companies coming into the space and they’re thinking two things, scale and efficiency. You’re going to see this not as a moment, but rather a shift of the current business model.”