Taco Bell launched its breakfast menu nationwide in 2014, and within two years, breakfast accounted for 10 percent of its business. The brand has seen positive same-store sales in 19 of the past 20 quarters, including 14 consecutively.

The move comes after Wendy’s made its nationwide breakfast debut earlier this month, which will be backed by $70 million to $80 million worth of advertisement to raise awareness. The company will contribute $40 million to $50 million, while franchisees will pick up the remainder of the tab. The chain previously said it would make a $20 million upfront investment to assist U.S. locations and hire 20,000 employees to ensure the menu’s success. The company projects the breakfast menu to generate $600 to $800 million in sales this year, equal to a 6 to 8 percent lift in comp sales. 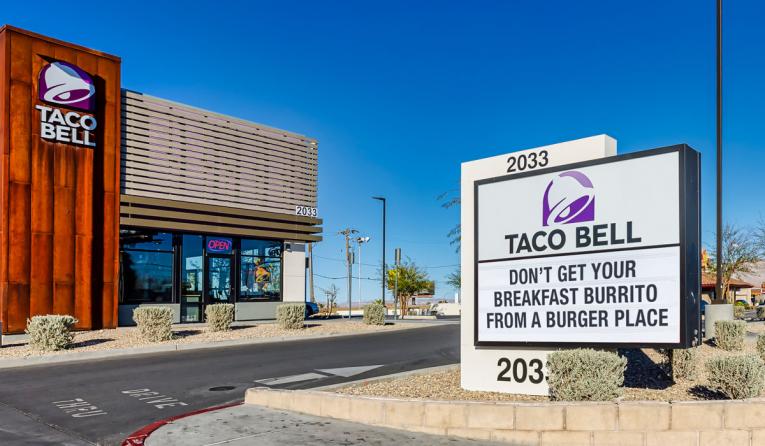 Taco Bell is having a little fun with the competition, in typical style.

McDonald’s has made noise in the breakfast wars recently, as well. The chain declared March 2—conveniently the same day as Wendy’s breakfast launch—as National Egg McMuffin Day in which customers could receive a free Egg McMuffin through the McDonald’s app. In January, the major chain added a Chicken McGriddle and McChicken Biscuit to its morning menu.

Additionally, Starbucks has introduced protein-packed breakfast wraps and a plant-based breakfast sandwich to appeal to health-conscious consumers while Dunkin’ rolled out Snackin’ Bacon to draw in consumers seeking indulgence. A couple of weeks ago, Panera Bread launched an unlimited monthly coffee menu for $8.99 to grow its traffic and membership program.

According to the NDP group, Americans ate almost 102 billion breakfasts last year, with another 50 billion morning snack occasions. Breakfast represented 16 percent of traffic in the fast food segment in the 12 months ending November 2019.

“We serve nearly one billion burritos to our fans every year and our new Toasted Breakfast Burrito menu solidifies that Taco Bell is the place for burritos across all dayparts,” Melissa Friebe, Taco Bell’s SVP of brand marketing and consumer insights, said in a statement. “We’re constantly listening to consumers to fit their needs and we know that these breakfast burritos are the perfect addition to morning routines. We’re excited to bring our fans this new lineup among a sea of breakfast sandwich sameness.”

The chain added 172 net new units in the period and opened its 60th urban-style Cantina in the U.S. It also debuted 71 net international restaurants in the period, including new markets in Portugal and New Zealand. Taco Bell’s global development of 291 net stores in 2019 was a 30 percent increase over 2018.

Additionally, Taco Bell ended the period with 20 seconds faster service, year-over-year, the company said, which translated to 9 million more cars rolling through the drive thru in 2019.

Taco Bell will open a Times Square location in the fall, which promises to be the most technology-forward Taco Bell to date. The company said the new Cantina will “utilize new digital features that not only allow for a smooth ordering experience but showcase digital moments throughout the restaurant like never before.”

The other fast-social unit, to open in San Ramon, California, will be based around gaming. In addition to those two new units, the chain will test a conversion of three traditional suburban Taco Bells into Cantinas and evaluate their performance.