Under NEXT Brands and Development, the fast casual hopes to reach 50 stores in the next three to five years.

Beef-A-Roo has been around for more than 50 years, with nearly all of its restaurants huddled in Rockford, Illinois, the largest city in Illinois outside of the Chicago metropolitan area.

Outside of that market, which boasts a population of roughly 150,000, brand awareness is minimal. But NEXT Brands and Development, which acquired franchising rights last year, hopes to change that, and transform the cult-favorite fast casual into a national name.

The chain was founded in 1967 by Dave Debruler and Jean Vitale. Decades later, they sold the business to their children, who then turned the company over to a private equity firm a few years ago. Beef-A-Roo is known for its slow-roasted beef sandwiches, burgers, chicken sandwiches, cheddar fries, onion rings, milkshakes, and salads.

Austin Capoferi, president of Beef-A-Roo franchising and NEXT Brands, says the company was attracted to the restaurant’s food quality, which he claims is “unmatched by any other [quick-service competitor].” He was also impressed with the longevity of employees; there’s one manager that’s been with the company for 38 years.

“That just told us about the culture of the company,” Capoferi says. “And when we saw how dedicated the employees were, how great the food is, we knew we had to get involved.”

Beef-A-Roo currently has nine locations, but NEXT Brands wants to bolster that to 50 stores within the next three to five years. The company began its franchising operations at the West Dundee, Illinois, unit, which is about 50 miles away from the cluster of corporate restaurants around Rockford.

The plan is to keep this outlet as a flagship training location for future franchisees.

“I live in Michigan, so I fly there about once a month,” Capoferi says. “I go there for two to three days at a time. Sit in the lobby, do my administrative work, talk with the staff. And every single time, I kid you not, I'm sitting there on my computer in my suit doing my work, and I have customers come up to me every single time and tell me not only how great the food is, but how great the staff and that everyone that works there is just so nice.”

Although NEXT Brands came on board as a partner to the private equity firm, the company still held several meetings with the family. The two sides discovered they prioritize similar values and that not a lot of operational changes were required.

Megan Rosen, chief development officer for Beef-A-Roo franchising and NEXT Brands, calls it a “very sustainable, successful” model and says that “after 50 years, they had it pretty down pat.” Foodservice wise, everything is being kept as close to the original as possible, like maintaining relationships with local and regional suppliers.

To make Beef-A-Roo a more replicable and franchisable concept, the development company was more concerned with store design. A handful of units have themed decorations, including a 50s diner, train station, fire station, and north woods lodge—the type of decor that isn’t necessarily cohesive and financially viable for a large national chain roll out.

So NEXT Brands took feedback from the family and incorporated those elements into a standard design, evoking a “warm and welcoming Midwestern home.” The floors are made of dark wood, the walls contain exposed brick, and the chain’s mascot, the Beef-A-Roo Buckaroo, was made a focal point inside the restaurant. Also, to validate the brand’s reputation as a gathering place for friends and family, all future stores will include a big, 10-person booth.

“I think they're excited to see the brand that they grew up with and knowing in this small community be brought to other communities," Rosen says. "Because it was kept so insular. It's such an interesting thing. If you're from Rockford, Illinois, you know Beef-A-Roo. But if you're 10 miles outside of Rockford, you don't know Beef-A-Roo. So they were definitely really excited to see their name and the brand that they helped build be brought to a national level.” 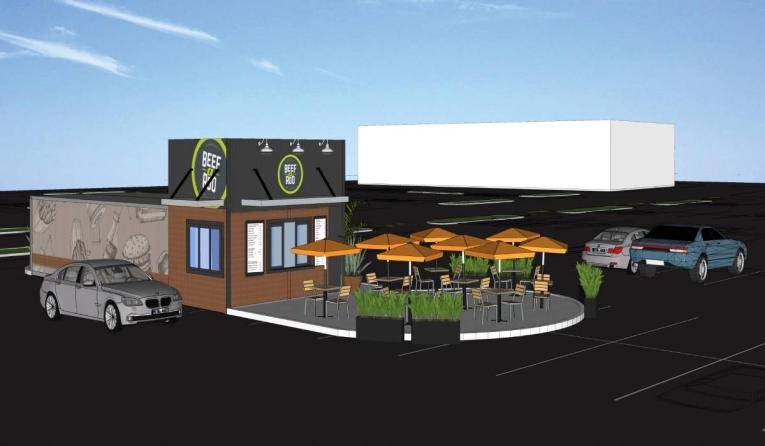 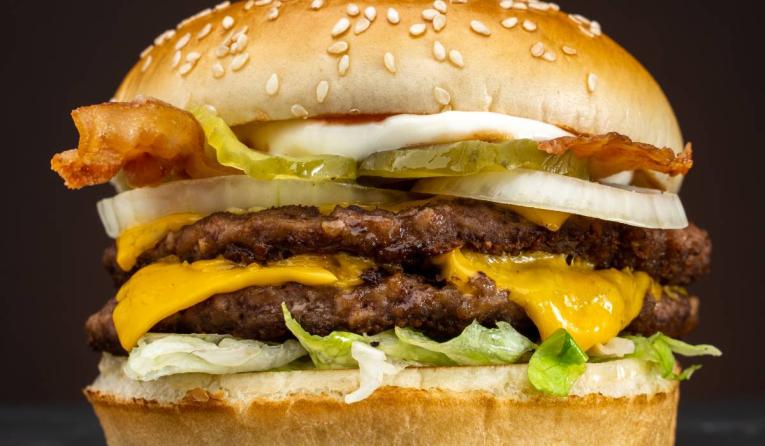 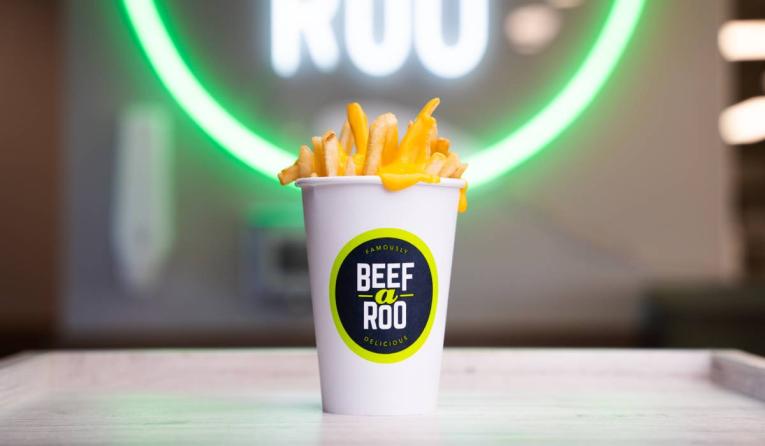 Future franchisees will have two boxes to choose from—a 3,500-5,500-square-foot brick-and-mortar restaurant and a 800-square-foot drive-thru-only container model. The latter version will have a shorter lead time to getting open and will be less of an investment for operators, including a 50 percent cut on labor costs. And that’s without sacrificing sales.

The container model is for heavily trafficked parking lots outside of large grocery store chains that are easily accessible from main roads. Beef-A-Roo will open its first container restaurant in Rose City, Michigan, later this year.

“Sales through the pandemic, which a lot of restaurants took a huge hit on, really weren't impacted at Beef-A-Roo’s because of the ability to do most of their sales through drive-thru,” Rosen says. “So we really felt like it was a good fit for this concept.”

The fast casual has received interest for both prototypes. Looking into her crystal ball, Rosen would like to believe Beef-A-Roo’s future footprint will be split 50/50 between the two, but the specific market will be the true deciding factor.

Being on the West Coast, she’s familiar with the rise of Dutch Bros Coffee and how the chain is “expanding like crazy” (the concept opened a record-breaking 98 stores last year) because of its small store footprint and convenient drive-thru. Then again, Rosen knows there will always be room for sit down. To her point, quick-service brands like Jack in the Box and Wingstop have pointed to open dining rooms as the next step in building sales.

“I think there's room in the market for both,” Rosen says.

Beef-A-Roo is looking to expand in the Midwest and Southeast, in states like Michigan, Illinois, Texas, and Florida. The brand is primarily looking for franchisees that could commit to three to five units, which could be a hybrid of container and traditional, or entirely brick-and-mortar. However, the restaurant won’t turn away those interested in opening one store.

Capoferi says the first franchise deal could be struck soon.

“There's absolutely nowhere to go but up. We truly believe that this could be a household name across the U.S. very quickly—that is how much we believe in it, how much we love the brand,” Capoferi says. “And I'm not just saying that because I'm the president of this company. I'm saying that because I am 100 percent behind it. We don't get involved with anything that we don't believe in and that we're not behind, and we’re not just in this to make money. We want to build this out to be able to take this brand to other states, to other people, and help those franchises succeed.”