Jack in the Box's Sweeping Plan to Solve Staffing

Fast Food | May 31, 2022 | Ben Coley
Miso Robotics
Jack in the Box's operation services team is using new processes, equipment, and technology to remove costs from the P&L and drive topline sales with improved speed, like the testing of robotics.

Jack in the Box CEO Darin Harris says labor still isn’t where he wants it to be. A meaningful number of stores operated at reduced hours during the chain's fiscal second quarter, and many shut down dining rooms.

Because of these pressures—along with impact from Omicron and the lapping of federal stimulus—systemwide same-store sales decreased 0.8 percent in the quarter, year-over-year. Corporate comps rose 1.7 percent while franchises dropped 1.1 percent, the biggest difference being quicker and more deliberate pricing of 8.2 percent at company-run stores.

The good news is the burger chain is pulling multiple levers to enhance staffing as much as possible in the back half of 2022.

During Q2, the chain implemented a new initiative in two of its largest company-owned markets, with positive results. Methods include working with contract recruiters, leveraging direct mail campaigns and an improved employee referral program, providing premium pay for the late-night daypart, and more.

These efforts have led to a significant increase in interviews and higher retention, including a 7 percent increase in employee count in Los Angeles versus January 1 when the strategy started. Jack’s company footprint (172 restaurants) is now at 90 percent of pre-pandemic staffing levels.

The company cut impact of lost labor hours by almost half between Q1 and Q2, and the operations team is working with franchisees to follow this leap.

“We are already sharing these best practices for staffing with our franchise partners,” Harris said during Jack’s Q2 earnings call. “As everything we have achieved in these markets is translatable and scalable to others in our system.”

In addition to recruitment and retention, the fast-food brand remains just as focused on training protocols, including its certification program executed through a new online learning system. When Jack began tracking it nine months ago, the brand saw a 2 percent completion rate of training modules. Previously, the program was just for managers, but the company expanded it to all employees and hit 70 percent certification.

“Our commitment to helping our restaurant team members and managers break out of the box and reach their full potential, whether that might entail becoming a manager, a franchisee, or just having a great experience as part of one of our in-store teams, has been a part of the Jack culture for a long time, and we want to keep it that way,” Harris said. “These initiatives will help us raise the standard in all restaurants, but most notably, it will help propel evolving markets to improve performance.”

The other sticking issue for Jack is inflation’s impact on margins. Food and packaging costs for company-owned stores rose 4.8 percent year-over-year, mostly due to commodity inflation of 16.4 percent. The biggest impacts were seen in proteins, oils, and tacos. Meanwhile, labor expenses lifted 3.2 percent, largely fueled by wage inflation of 14 percent as compared to 2021.

Jack’s restaurant-level margin was 15 percent in Q1, including lower-performing stores in Oklahoma, Kansas City, Oregon, and Nashville that the company is intending to build up and refranchise. Excluding those units, margins were 18.3 percent.

CFO Tim Mullany described inflation across the P&L as “unprecedented and significant.” Jack intends to take more pricing actions throughout the year, and believes it has the room to do so, but that’s only one strategy it’s implementing to help with margin expansion.

The company invested in its operation services team, which is using new processes, equipment, and technology to remove costs from the P&L and drive topline sales with improved speed. Alongside this team is a margin task force comprising employees and franchisees. It’s purpose is to identify short-term opportunities to save costs and labor without harming the guest experience. 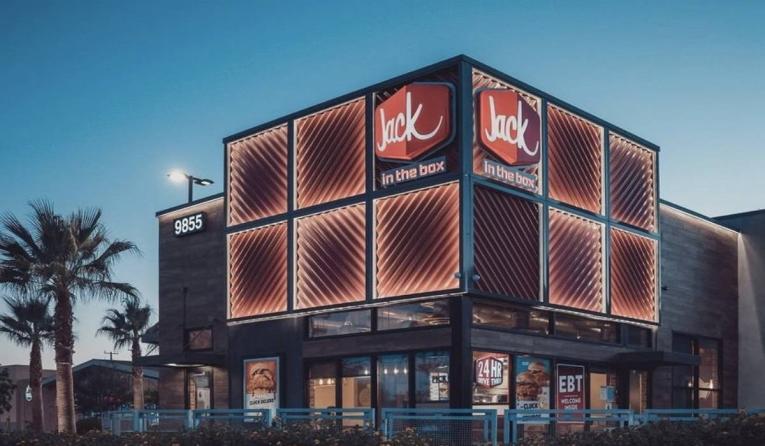 Jack in the Box has signed commitments for 218 restaurants since last summer.

The best example thus far is Jack’s partnership with Miso Robotics to test a fry-cooking robot that increases throughput by 30 percent, or roughly 60 baskets per hour, and a POS-integrated robot that automatically dispenses beverages and seals cups.

Jack believes these pieces—and other implementations—could improve margin by 200 basis points per store on average.

“Yes, we want it yesterday, to be honest with you,” said Harris, in reference to when all the strategic initiatives will roll out. "So we are aggressively pushing with our existing franchisees to realize some of those within the next quarter. I don't think we can get all of the 200 basis points just within the next quarter, but we would hope by three quarters from today, we would have realized a substantial portion of these."

Solving staffing and inflationary woes is the company’s way of providing the best experience possible for customers. So is Jack’s reimage program, which officially launched in the second quarter. Twelve corporate units are already in the design and permitting phase, and 136 franchise restaurants have been approved.

In Yuma, Arizona, the parking lot doubled in size to accommodate a double drive-thru and fully remodeled dining area. In the first month, the location saw a 25 percent lift in same-store sales and exceeded $100,000 in sales per week, driven mostly by transactions. To put it into context, that equates to an annualized AUV of more than $5 million.

Jack is providing capital incentive to encourage operators to join the remodeling program.

“We will continue to create more reimaged case studies like this one, which will influence our franchisees to take further advantage of the new program and its capital support, leading to significant progress on reimaging our restaurant base and ultimately sales growth, something we are enthusiastic about working to accomplish and is tremendously important to our future,” Harris said.

In terms of unit growth, Jack has signed 53 development agreements for 218 restaurants since it launched a revitalized franchise program last summer. So far, 12 of these stores have opened. A little more than 30 percent of existing operators have inked a deal, but Harris estimates that will improve to about 50 percent around this time next year.

Del Taco, which joined the Jack family in March, saw same-store sales rise 2.5 percent in the second quarter. The fast casual signed 10 development agreements in Q2, and since 2021, new operators have signed up for 74 stores across 11 states. Currently, roughly 49 percent of Del Taco’s footprint is company-owned, but Jack is finalizing a go-to-market plan to refranchise a majority of those units.

“We have internally set a target for where we think we become asset light,” Harris said. “We’re not prepared to provide that guidance today. But what I would say is that we think there's tremendous opportunity to refranchise Del Taco. We're prepared. We've identified markets and how we would cut it up with development opportunities and we've been working with a third party that will help us launch into this refranchising initiative. So we'll provide more details to come.”

Jack finished Q2 with 2,207 restaurants, including 2,035 franchises and 172 corporate outlets. Del Taco had 599 stores, including 293 company stores and 306 franchisee-led locations.

For the full fiscal year, Jack’s same-store sales are expected to be flat to positive 1 percent while Del Taco’s comps are projected to grow 3 to 4 percent.