The nearly 200-unit brand's sales are soaring and so is its growth.

Web Exclusives | July 27, 2020 | Ben Coley
Golden Chick
In 2020, and in the midst of the pandemic, Golden Chick launched its new Big & Golden Chicken Sandwich. What sets it apart from all the other chicken sandwiches? Extra large fresh baked yeast roll bun cooked throughout the day at each restaurant, with a plump chicken breast (0.5 ounces larger than direct competitors), plus five pickles and a proprietary Lotta Zing Sauce gives it a spicy finish.

The 192-unit brand, based in Richardson, Texas, was witnessing same-store sales growth of 5 percent before the mandate. But with dining rooms closed and unsure consumers, the brand took a five-week plunge in which comps dropped 15 percent.

To create financial flexibility, the executive team took about $600,000 worth of pay cuts. Stevens says when the reductions were announced to the entire management team, many volunteered to take salary cuts as well.

“We are a family business, a local Texas business, and everybody really wanted to pitch in at that time and help moving forward,” Stevens says. “Our thought was, we need to do everything we can immediately because we might not get the chance to make these decisions again, and we don’t want to miss the opportunity to protect our brand in the short-term when that all happened.”

The company’s breakthrough came in the aftermath of the stimulus checks. After the five-week plummet, sales rose in consecutive weeks to the point where Golden Chick finished Q2 up 20.3 percent. In Q3 thus far, the brand is growing 22 percent and year-to-date, comps are increasing 16 percent.

Development hasn’t missed a beat either. Since March, eight restaurants have opened, and another 18 are scheduled for the rest of 2020. That means Golden Chick will surpass 200 units before the end of the year.

“Everybody certainly got hit with the cold water for those five weeks, but the stimulus checks helped, the PPP came in and helped us through that five-week period dramatically, and it’s gotten us to a position of strength right now,” Stevens says. “There’s a lot of things that go into that and there’s been a lot of time and a lot of late nights, but we’re feeling very lucky at this point in time."

More importantly, no one was laid off in the field or at the corporate center during the low period.

Howard Terry, Golden Chick’s SVP of marketing, says it was important for the brand to stay committed to its employees. 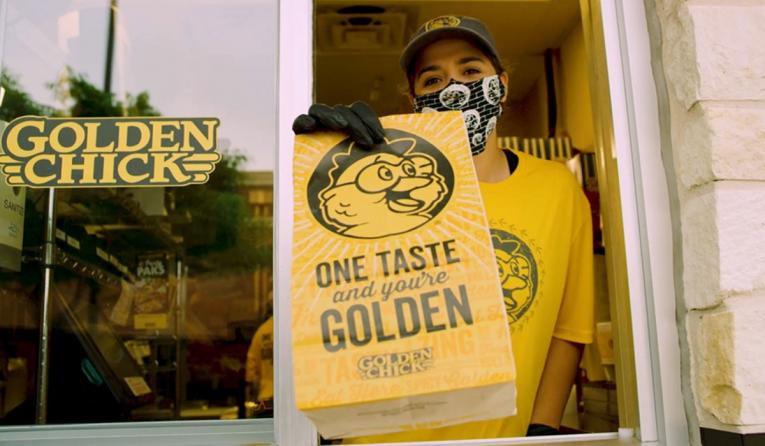 Golden Chick renewed it attention to on drive-thru performance. Committing to the new reality and focusing on speed, cleanliness and sanitation during the entire dining process was one of the keys to Golden Chick’s ongoing success throughout the pandemic. 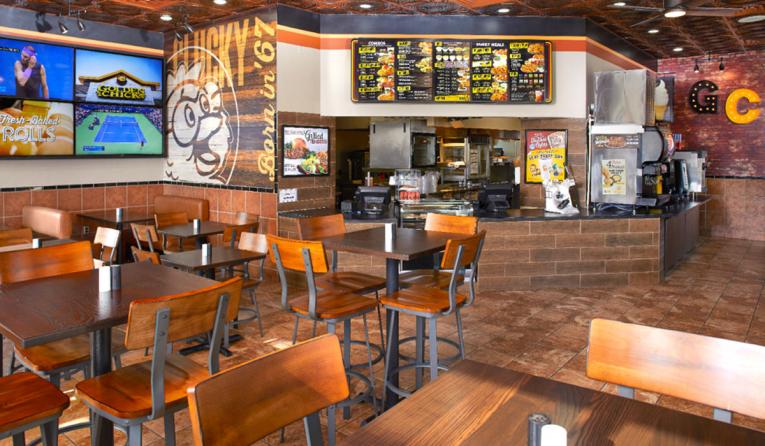 Golden Chick rolled out its new refresh program in early 2020. The program involves a new digital menu system, enhanced and modernized interior features, media wall and front deli cabinet. More than 25 locations have completed the refresh with the balance of the system implementing by end of year 2021. 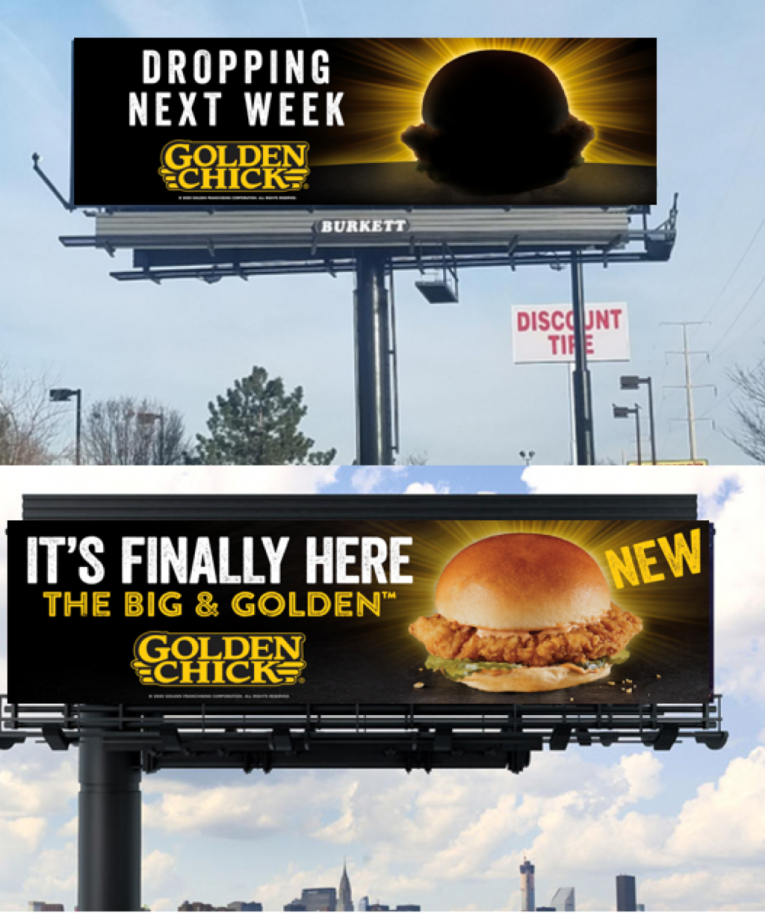 Golden Chick launched Its new Big & Golden Chicken Sandwich with a series of teaser billboard campaigns, sandwich giveaways to media and essential workers followed by aggressive TV and radio support in all markets.

“When we got to a low of 15 percent, we were tracking how the industry was doing, and we were far better off then a lot of people were in the industry, and we were glad to only be down 15 and then quickly rebounded,” Terry says. “When those stimulus checks came out and as consumer confidence grew a little bit, sales rebounded very, very quickly. They went from down 15 to all of a sudden 10 and then it just kept climbing.”

In the midst of navigating the pandemic, Golden Chick found room for menu innovation. The brand joined the sandwich wars with its own Big & Golden Chicken Sandwich, which was rolled out systemwide at the end of May.

The sandwich includes a 5-ounce hand-breaded and deep-fried chicken breast that is covered with five pickles and Golden Chick’s own Lotta Zing sauce. That goes in between the company’s signature yeast rolls that are baked fresh daily.

“When the pandemic hit and we saw that our business had gone to even more extensively through the drive-thru, we felt that the product was right on course, and we continued to prep it, train it, roll it out, and then stayed right exactly as scheduled for promoting it,” Terry says.

Right now the chicken sandwich is mixing about 9 percent. But that number is expected to rise since the brand didn’t start promoting the new product on television until two weeks ago.

The roll out of the Big & Golden Chicken Sandwich followed the release of Golden Chick’s butterfly shrimp product during Lent in March. And Stevens says the restaurant has a couple more significant products it will move to market in the next few months. Although it’s tricky to balance fluctuations in business, the marketing calendar, and innovation, the president says there’s still room for new product news if it’s a quality item and reasonable for drive-thru.

“I think a lot of our growth this year has come from an initiative that we’ve all had called the Customer of Tomorrow, which is growing our customer base, not just frequency of our current customers, but broadening our appeal with some items like the butterfly shrimp—adding a protein we haven’t had on our menu,” Terry says. “The Big & Golden Chicken Sandwich, we felt was a best in category sandwich and was going to broadly appeal to people we maybe haven’t received any traffic from in the past. It’s also something we feel like echoes what’s best about Golden Chick in terms of our flavors and being fresh baked every day.”

Beyond 2020, the future appears bright for the Texas-based chain. In July, Golden Chick announced a 20-unit deal to expand into Las Vegas, a new market. The first location is scheduled to start construction prior to the end of the year.

Stevens says the deal is part of an overall trend. Late last year, Golden Chick signed a 55-unit deal in Houston, and even before that, a 35-store deal in West Texas. Three months ago, the restaurant opened its first store in Louisiana, which Stevens says is exceeding expectations. There are plans to sign a five-store deal in Baton Rouge, Louisiana, and move into the Gulf Coast next year.

Forty-two units are in the pipeline for 2021. The brand is growing so much that it’s actually having to reassess its goals. When Stevens joined Golden Chick last year, the team formulated "Destination 30," or goals to accomplish by 2030. This included opening 500 restaurants, claiming a top-100 spot in the quick-service segment, and reaching $1.2 million in AUV.

One year in, the AUV mark has been exceeded and now the company is projecting somewhere between 500 and 600 restaurants by 2030.

Stevens says the growing sales and attractive menu items are important reasons for the growth, but so is continuing to operate with a small company attitude.

“We’re a tight-knit family organization,” Stevens says. “And I think when you look around the [quick-service restaurant] universe, I think there’s a large group of individuals that are looking for that kind of environment—maybe more than the public companies, maybe more than private equity companies. They’re looking more for a family organization.”