One of the category's fastest-growing brands continues to carve its own niche.

The fast casual now has more than 190 locations.

Being shut down for selling chicken salad door to door is a great motivator to start a restaurant empire. This is what co-founders Stacy and her late husband, Kevin Brown, proved in 2008 when they launched Chicken Salad Chick in Auburn, Alabama.

Stacy was a recently divorced mother of three while Kevin was just laid off as a software salesman. When the health department stopped Stacy from selling her kitchen-made specialty, she turned her love of chicken salad into a restaurant.

Now, Chicken Salad Chick serves its 12 flavors in 17 states with more than 190 locations as the first, and only, chicken salad-centric franchise in America.

Chicken, in general, has received ample love of late in quick service, fueled by the industry’s sandwich craze. What was once hailed as the year of the chicken in 2018 has become nearly an era of extended sales growth thanks to Popeyes igniting the so-called “chicken sandwich wars.”

Of the 12 different chicken salad flavors, there is one for everyone’s palate. From Jalapeno Holly, Fruity Fran and Sassy Scotty, each flavor has a character, making the menu fun and unique, Deviney says.

Deviney says the chicken category blew up in part due to the healthy and versatile role chicken can play in a diet. Being healthier than many red meat alternatives with the ability to be grilled and fried in several formats, it’s sparked a bevy of innovation. Chicken Salad Chick is seizing an opportunity where comfort food and the chicken category merge.

Deviney joined Chicken Salad Chick in 2015. At the time, there were 32 restaurants open with eight company stores and 24 franchise locations, a far cry from the more than 190 restaurant fronts the brand operates now.

Chicken Salad Chick is set to open its 16th restaurant this year, adding onto its growth across Texas to Florida to Illinois.

To push forward growth, Deviney says brand awareness has been integral. Building a large visible sign on a busy street is one of the best marketing tools out there, he adds. The word of mouth that spreads when new people are introduced to the concept has also been beneficial in bringing in customers. 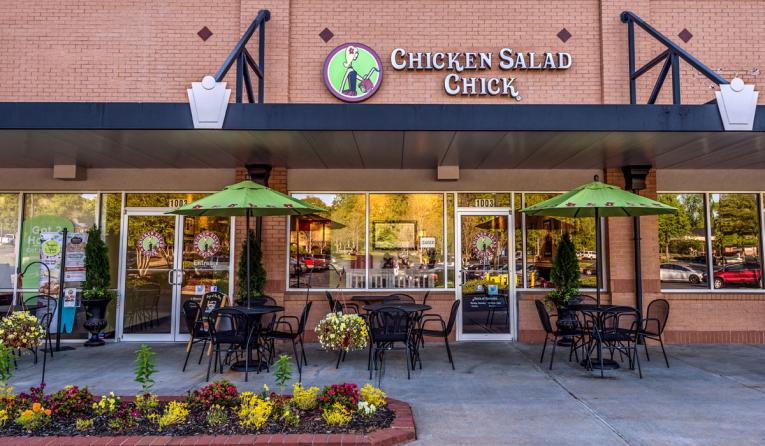 "Make everybody feel as though they are the most special person in the world. When they leave, we want them to leave happier than when they came in," CEO Scott Deviney says.

Deviney says Chicken Salad Chick followed the 80 percent franchise and 20 percent company store model, believing it to be most successful, while steadily growing in regional areas.

Deviney believes in the path because it allows businesses to scale right away, he says. If the company store model isn’t set up, then you rely too much on selling franchises to fund infrastructure growth, he adds.

“Having a nice balance between company stores and franchise stores gives you the ability to scale at the right pace to keep up with the franchise growth that's happening,” Deviney says. “That's what I think helps build a brand long term successfully.”

By moving into new markets concentrically, it is easier to lean on word-of-mouth marketing and product sampling instead of spending significant amounts of money on advertising in new markets where no one has heard of you.

“We get notes all the time from guests that just love coming into the restaurants,” Deviney says. “The feeling, it's almost like the warm hug you get because you just walked into your best friend's house for lunch. So that is part of our secret sauce: just spread joy, enrich lives, serve others. Do it one guest at a time. Make everybody feel as though they are the most special person in the world. When they leave, we want them to leave happier than when they came in.”

Like other quick-service restaurants, Chicken Salad Chick is still not out of the throes of the pandemic. Sales were slightly down for the year but there was a rebound in business in the second half of the year, especially because most of the restaurants are located in the Southeast where dining rooms reopened sooner.

The chain still managed to obtain a double-digit year-over-year sales increase and was able to open 26 new stores last year from June to December, out of a total of 37 that year.

“At one point, we were sitting there saying what, what's going to happen? No one knew. We were all staring into an abyss,” Deviney says. “The one beautiful part about franchising is you get some great ideas that come from your franchisees.”

Franchisees led the charge in building creative solutions like community drops, pre-selling chicken salad into different neighborhoods and cities. By advertising it would be in a specific area of town on a certain date, Chicken Salad Chick locations were able to deliver into its communities. Soon enough this strategy was adopted throughout the whole brand, and in that way, a negative transformed into a positive for Chicken Salad Chick.

Chicken Salad Chick also began a host of donated meal programs for frontline workers, where the restaurant delivered meals to hospitals every Friday. Customers rallied behind both the business and frontline workers by paying for hospital employees’ meals at the height of the COVID-19 pandemic. Pop-up drive-thrus also became a norm for Chicken Salad Chick during the last year as the company aimed to get back to a type of normalcy.

Still, the labor market is tight and there have been hiring shortages across Chicken Salad Chick’s supply chain. Whether it was fear of catching COVID-19, a higher salary with unemployment benefits or needing to stay home with children during the rise of virtual schooling, people had their reasons for staying out of the workforce, Deviney says.

“There were a myriad of reasons why people weren't coming back to work, but we felt the pinch,” Deviney says. “And we felt it all up and down our business.”

We might soon be at the start of labor relief, Deviney says, but it has been a rough time for restaurant teams across America.

Pandemic aside, Chicken Salad Chick still has not lost sight of its goals: achieving 500 restaurant units by the end of 2025. The sense of community forged by the previous community drops and donated hospital meal programs could aid the chain in its growth moving forward.

“With the business rebounding back, we really think that we are poised for long term success because we're so community driven and so purpose driven, and our communities love the way we take care of them,” Deviney says.