Johnny Rockets Gives FAT Brands the Muscle it's Been Looking For

FAT Brands is quite familiar with the brand acquisition game.

The company has purchased eight restaurants—seven of which came after it went public three years ago.

The brand knows what it wants, and it’s wanted the 1950s-themed Johnny Rockets for a long time. CEO Andy Wiederhorn lauds the 34-year-old restaurant’s brand equity, venues, and international diversification (175 of the 325 stores are outside the U.S.)

Much to the excitement of Wiederhorn and FAT Brands, Johnny Rockets was put on the market at the end of 2019. The sales process was placed on hold because of COVID, but Wiederhorn says FAT Brands continued to have a dialogue with the owner about how to make it work.

“We’re making an investment for the long term, not the short term, and to us it made sense to figure out how to get it done now and take over the brand so we could really try to move the needle forward and help the franchisees execute here coming out of COVID,” Wiederhorn says.  … When brands are for sale, they tend to put plans on hold. Everybody does that. So they’re waiting for the next opportunity to come to them. And in our case, we want to move this thing forward. It’s been on hold for a while, and we’d like to get going again.”

Wiederhorn notes that Johnny Rockets has focused heavily on delivery and to-go sales like every other restaurant amid the pandemic, but he adds that the brand has suffered in some markets because of closed nontraditional venues like amusement parks and cruise ships.

As he puts it, Johnny Rockets is “taking their lumps for it,” but that’s not to say their isn’t significant potential. Wiederhorn says FAT Brands knows how to acquire a brand, integrate it, and drive incremental sales for operators. For example, Fatburger and Buffalo’s Café have seen positive same-store sales growth for a number of years. Additionally, when FAT Brands bought Hurricane Grill two years ago, comp sales were down 4.7 percent. By the end of 2019, the chain saw an increase of 8.3 percent. The CEO says Hurricane Grill and Buffalo’s Café have recovered more than 100 percent of historical same-store sales during the crisis thanks in large part to outdoor dining.

FAT Brands seeks to ignite a similar turnaround at Johnny Rockets, which saw U.S. sales drop from $228.5 million in 2018 to $220 million last year, according to FoodserviceResults. When Sun Capital bought Johnny Rockets in 2013, the chain had around $300 in annual revenue. Wiederhorn says some of the low-hanging fruit is menu innovation like plant-based items and increasing marketing efforts.

He describes the transaction as “transformative in terms of scale,” and says Johnny Rockets gives FAT Brands “a lot of muscle.” The purchase widens FAT Brands to more than 700 franchised and company-owned restaurants globally and pushes annual sales above $700 million. Johnny Rockets is expected to double annual adjusted EBIDTA to $7.7 million. 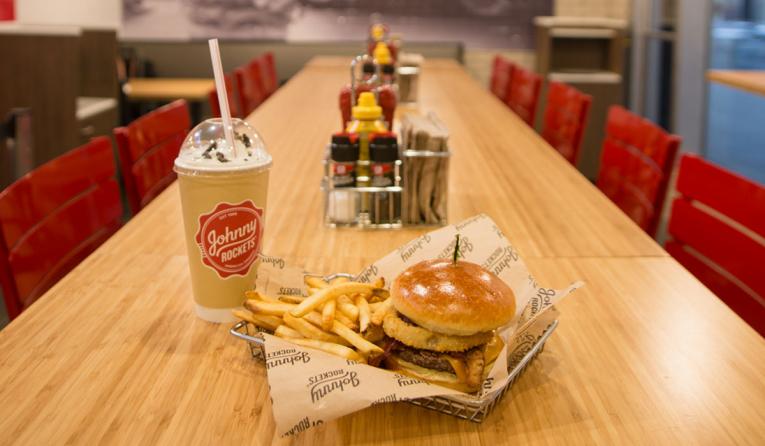 For Johnny Rockets, the immediate goal is to integrate the restaurant into FAT Brand’s platform over the next 90 days in areas such as marketing, operations, and back-of-office functions.

It rounds out perfectly with the other two burger brands we have—Fatburger and Elevation Burger,” Wiederhorn explains. “With Elevation Burger being a little more healthier, organic, grass-fed, and Johnny Rockets being a themed brand, so in certain venues it works really well with the themed diner look and feel. And then Fatburger being a little more urban. So it gives us the opportunity to visit with the landlord and figure out the right brand for their location or their venue for burgers. Very excited about it.”

At the beginning of the year, Johnny Rockets CEO George Michel, who is no longer with the company (Wiederhorn serves as CEO), said the brand wanted to direct its focus to nontraditional spaces such as casinos, theme parks, airports, and cruise ships.

The industry has changed much since then, with nontraditional units suffering because of closures and lack of traffic. Wiederhorn insists these are only temporary closures for Johnny Rockets. He says FAT Brands isn’t going to be afraid of special venues, whether it is a mall or an amusement park.

However, the company will make sure those restaurants are equipped to facilitate delivery and takeaway. Wiederhorn explains that Johnny Rockets will also explore ghost kitchens, an option that has gained much traction since COVID struck in March. In fact, FAT Brands opened its first-ever ghost kitchen in Chicago back in April. The company has a deal with Epic Kitchens to open 20 ghost kitchens across major metro areas in the next two years.

“Not every restaurant is designed at the time it’s built to have the ability to do delivery and off-premise, so I think we want to be mindful of that,” Wiederhorn says. “Everybody should be mindful of that—how do you do delivery out of your restaurant, how do you do to-go business out of your restaurant, in case something happens again? Nobody’s expecting this thing to ever happen again, but still doesn’t mean you don’t get the benefit of those sales.”

Johnny Rockets won’t be the final restaurant to join the FAT Brands family. Wiederhorn says the company is “absolutely inquisitive these days” and sees additional acquisitions in upcoming quarters. FAT Brands is considering a number of transactions right now within the spectrum of quick-service restaurants, fast casual, and casual.

For Johnny Rockets specifically, the immediate goal is to integrate the restaurant into FAT Brand’s platform over the next 90 days in areas such as marketing, operations, and back-of-office functions.

The brand will undergo a full evaluation, so the growth process can begin quickly—a process that the CEO says could result in Johnny Rockets increasing to 500 or 600 units in the next handful years.

“There’s just tremendous opportunity to grow in the markets because there’s such brand awareness,” Wiederhorn says. “It’s very flexible in terms of how you adapt it to a venue, so I think that’s going to continue to be a big opportunity.”