KFC quietly launched online ordering on its website, but has since turned up the media.

KFC’s U.S. chief technology officer, Christopher Caldwell, started with Yum! Brands as an intern. It was his first interview out of the University of Louisville, and he hasn’t left since. That was more than two decades ago.

In Caldwell’s early Yum! days, he worked in IT. If somebody’s computer had a problem, he’d walk over and fix it.

Yet as fuzzy and distant as that world might seem, you really only need to look back five years to see a KFC that appears entirely foreign to the one operating today. Caldwell recalls attending regional meetings and annual conventions and taking a back seat during presentations. Last year? “I felt like I was on stage for the entire convention,” he says of Yum!’s yearly strategic recap.

In talks with franchisees today, he says, “78–80 percent of the questions are on technology and innovation.”

“It’s just mind blowing how quickly it’s changed. I think a lot of that is franchisees see now the impact technology can have on the business,” Caldwell adds.

These are fast-moving times. You could argue there’s been more innovation in the past five years than the previous 50 for restaurants. Just look at how Yum! is hiring.

And if it feels like the word “technology” is coming up often here, it’s really just crumbs down a much longer trail. Also, like Caldwell says, it’s early days.

At KFC in particular, the brand has methodically laid the framework for a significant push. In early October, KFC launched online ordering ahead of chicken wings. But it did so with zero media. Caldwell says they wanted to take in customer feedback and work through kinks before diving in.

It didn’t quite go as planned, however. “It was really crazy to see that the day we turned it on with no media at all, people just, the floodgates opened,” he says. “It was surprising.”

The coming weekend, KFC ignited marketing and enjoyed “our biggest weekend by a long shot” in terms of delivery and digital ordering, Caldwell says.

KFC wasn’t unprepared; it was simply trying to cross all its digital t’s. The brand had online ordering live via Grubhub’s platform for a while. This was the first time, though, KFC’s website and properties offered the capability.

Roughly 2,700 KFC’s feature delivery currently via the aggregator and 3,700 restaurants are available for click-and-collect. 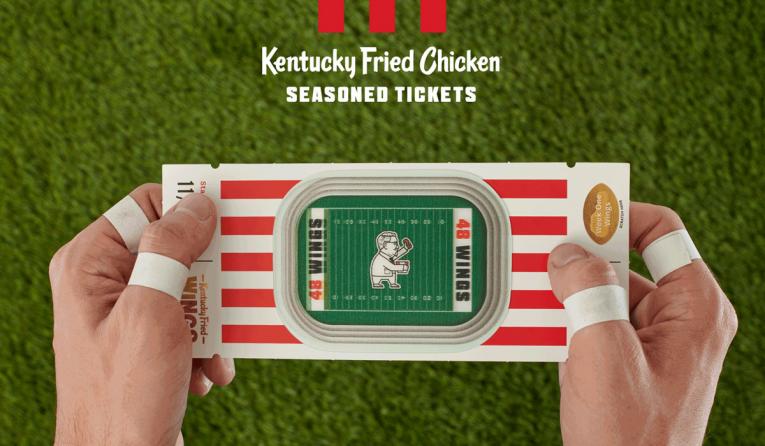 Yum! has a $200 million stake in Grubhub and took its time rolling the capability out to KFC and Taco Bell. The reason being Yum! wanted to make sure its point-of-sale was integrated directly into Grubhub’s app. This way, pickup could be timed to the moment an order is ready. It would make it easier for ground-level operators to serve orders and avoid the “tablet hell” so many legacy brands endure just to avoid missing the delivery boat.

While slow, KFC has felt built for the off-premises boom from the outset, Caldwell says. Yum! CEO Greg Creed, who is retiring at year’s end, said earlier that KFC’s dinner strength over competitors gives it a leg up in the game already, given delivery’s tendency to over-index the daypart in most markets. “I always jokingly said, I think the Colonel 60 years ago invested in the bucket realizing that one day we’d be delivering it,” Creed said.

Caldwell adds KFC spent more than a year and a half smoothing out operations to prepare for a national mobile ordering launch. It wanted the delivery and pick-up sides to be seamless. “Frictionless fried chicken,” as the team refers to it internally.

Once the brand was ready to flip, he says, KFC started to strategize cross-functionally across departments. Bring in creative marketing, a KFC staple. Menu innovation. And find the right time to air the company’s first nationally advertised free delivery offer.

The answer was Kentucky Fried Wings and football season. On October 11, KFC added the items and activated free delivery on orders of $12 and up. It didn’t matter if customers used KFC’s site or a third-party app.

A week later, KFC introduced “Seasoned Tickets” via Stubhub. For $75, consumers (500 of them) could receive weekly offers to get 48 wings delivered every week for 10 straight. As quirky as the concept was, the aim was straightforward. “To really, really highlight and build some mass of awareness to our consumers that we’re now in the online ordering game,” Caldwell says.

After KFC’s soft rollout, where it simply let guests stumble upon the functionality on its website, it began putting POP displays in restaurants. Then came the TV, “and that’s when it just skyrocketed from a sales perspective,” he says.

The key all along, Caldwell adds, was to make sure it didn’t feel like a trial run to guests. And for KFC, getting there required online training at all levels. KFC tried to think of everything before anything happened.

One example: KFC noticed, in some cases, that a driver would arrive and something would go awry with the geofence so the order didn’t flow into its kitchen display system. So, the chain built an application interface on its point of sale where it could click an online button and see any current orders. If the driver showed up early or late, KFC could examine the order and trigger it to the back line.

“Just creating small, little things like that to make sure we have all the technology in place for our operators to deliver a consistent experience to our customers,” Caldwell says. “That was essential.” 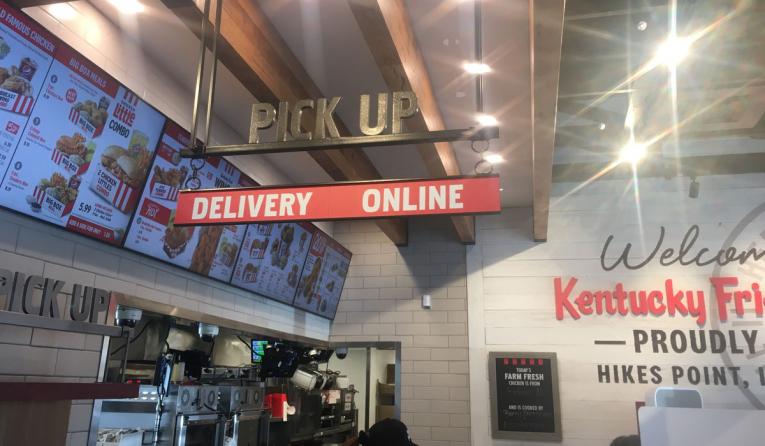 KFC also prepared by initiating a small, free delivery window on national fried chicken day. The company wanted to see how its franchisees handled an accelerated-sales day. The wildcard of free delivery—which is an unavoidable reality in today’s marketing-heavy aggregator space—generally results in two to three times the volume, Caldwell says.

Add in national media and the situation nears chaos. During the test, KFC pushed Facebook- and email-specific media so it could mirror, as close as possible, a national promotion.

“I think that gave our franchisees and our operators confidence that they knew what kind of volume they were going to see, and they knew what that would do from a staffing perspective, labor perspective within their restaurants,” Caldwell says. “It gave them the confidence they would be able to handle the additional volume during peak times.”

As far as training goes, he adds, the only real difference is that employees had to focus not just on the product and what they needed to do from a preparation standpoint, but also on the digital component.

Additionally, KFC’s food takes longer to cook than many chains, Caldwell says. Waiting 25 minutes for a bucket if you’re on the way home from work isn’t nearly as consistent and enjoyable as having the food ready to go when you show up. “If we can get that advance heads up through digital channels, I think it’s going to be a win for the customer,” Caldwell says. 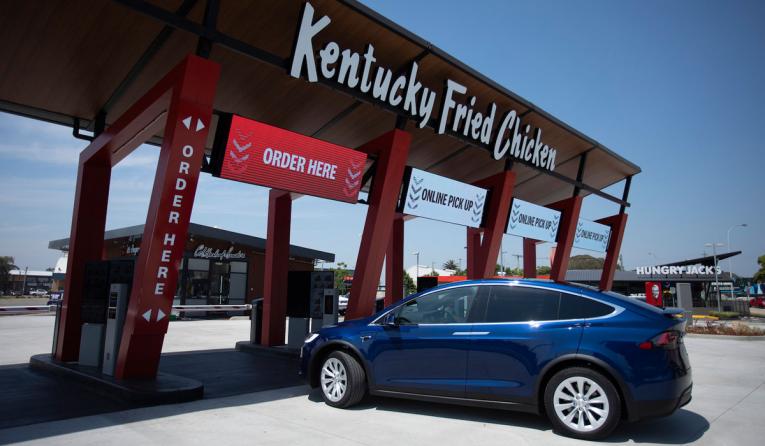 KFC recently opened a drive-thru only location in Australia.

The drive thru, in McDonald's-like fashion?

As exciting as delivery and mobile ordering might be for KFC, the old ways still rule. Despite all the forward movement, 65 percent of its business still rolls through the drive thru. And that’s somewhere KFC has a lot of room for innovation.

Caldwell says the brand is looking into automation, not unlike what McDonald’s is doing with its Dynamic Yield technology. Artificial intelligence and digital menuboards that automate order taking and can upsell items based on customer and transaction data, and without the reliance on employees to do so. The result would be a seamless check driver, as well as an improved guest ordering journey.

“I think all of those things our guests are going to expect from us,” he says.

KFC lagged in this year’s QSR Drive-Thru Study with 66.1 percent order accuracy. And its speed of service was middle of the pack at 243.73 seconds.

Caldwell says KFC is looking at “numerous technology vendors” and believes it can improve both of those metrics, among others, by investing in innovation. Everything from license plate recognition to knowing what a consumer ordered the last time they came to KFC. He added that these automation technologies wouldn’t necessarily require costly digital menuboards for franchisees. “If I can make a dent in anything like speed through the drive thru, accuracy through the drive thru, or just knowing guests and they’re preferences much better, that would be a win,” he says.

KFC posted third-quarter total same-store sales of 3 percent on net new unit growth of 6 percent. The chain has lifted from 22,104 global units to 23,435 in the past year. U.S. comps declined 1 percent versus the 2018 period.