Through Evolution, Caribou Coffee Remains in the People Business

A new model and omnichannel world has opened fresh possibilities for the rising brand.

John Butcher didn’t need a pandemic to understand the stakes. Coffee has always been a frequency business with a narrow margin to get it right. But the locked-down world Caribou Coffee suddenly found itself in, alongside the foodservice field, narrowed things. That barista might be the only interaction somebody had all day.

“When I ask people, ‘why do you choose Caribou, there are so many options in your neighborhood?’ The No. 1 reason is the people,” the CEO and president says. “The No. 2 reason is our great products and the way they taste, and the fact that they’re made with real ingredients. But it’s always the people.”

Caribou Coffee’s rustic “Chalet” stores, complete with fireplaces and inviting “third-place” layouts, nurtured the notion going on 30 years. Yet the trick became, fueled by COVID, how the brand could achieve this as more and more of its business flooded into the drive-thru. Butcher, who joined the company in June 2017 and was promoted to CEO in January 2019, following 20 years at Target, says Caribou asked itself a question that dominoed as tech adoption soared, even ahead of COVID. “If we know we’re in a people-first business, where customer service and connection really matter, then how do we retain that same level of interaction and connection through the drive-thru window?” he says.

These were lead concerns as Caribou began designing its “Cabin” model, which arrived in 2019. The prototype began as a 600-square-foot drive-thru with a walk-up window (no indoor seating). There’s a full coffee bar, limited food menu, and outside patio seating/dining space. Five opened in late 2019, four in 2020, and 13 in 2021. The 30th company-run Cabin landed in October 2022. 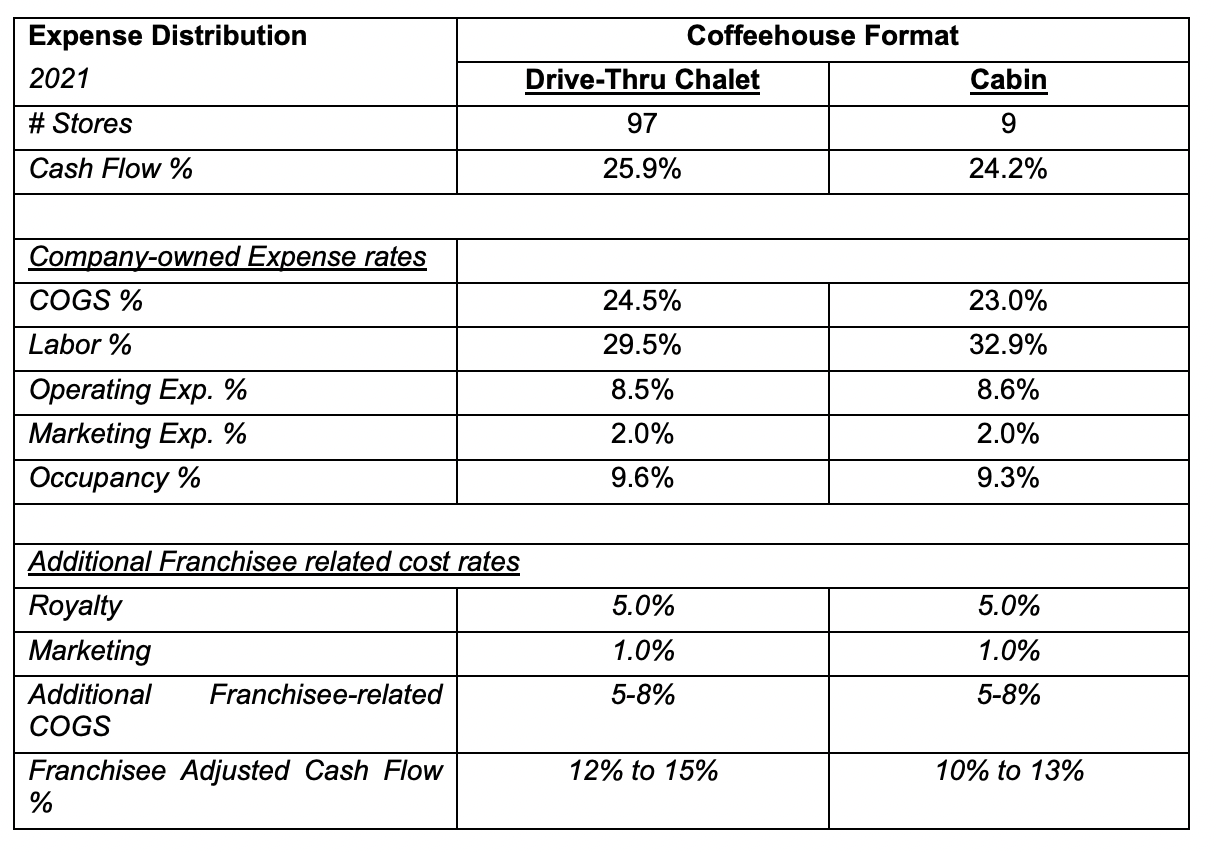 To date, Caribou’s Cabin format has been exclusively stand-alone buildings on developer lots, with a focus on street and traffic visibility. Chalets, which can include drive-thrus, generally open on the end of a strip or shipping center, or as a stand-alone.

Clearly, however, Caribou has appreciated success with the scaled-down, off-premises approach. And Butcher says it’s boiled down to holistic goals as well as operational ones. “How are we fast, efficient, accurate, of course, we have to be those things, they’re table stakes in our industry—but most importantly, if what sets us apart in the industry is our great culture and the way that we interact with our guests, how do you do that through the drive-thru window? We actually had to design a lot of the experience with that goal in mind,” he says.

It returns to the early observation. In the morning daypart, even if you skirt the idea somebody might not interact with another person that day, coffee is still typically a consumer’s first engagement outside of their household. “If you get someone’s day started off on the right foot, then we think that we have an opportunity for that person to go throughout their day with a little but more grace, a little bit more enthusiasm, and spark chain reactions of good in their community,” Butcher says. “And conversely, if we get it wrong—if we’re slow, inaccurate or rude, what a terrible way to start your morning.”

“We say often that something as small as a great cup of coffee in the morning or a kind interaction with our team can change the trajectory of a guest’s day,” she told QSR earlier. “And the way we operate our business can and should positively impact our global communities. Are we saying that coffee can change the world? No, we’re not. But the people connecting around that coffee just might.” 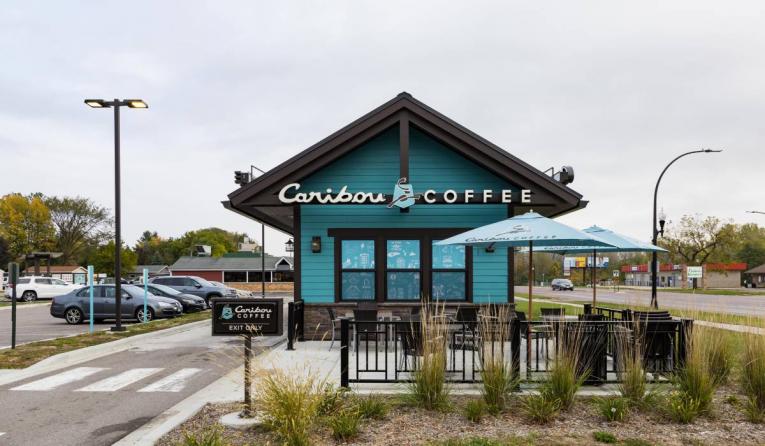 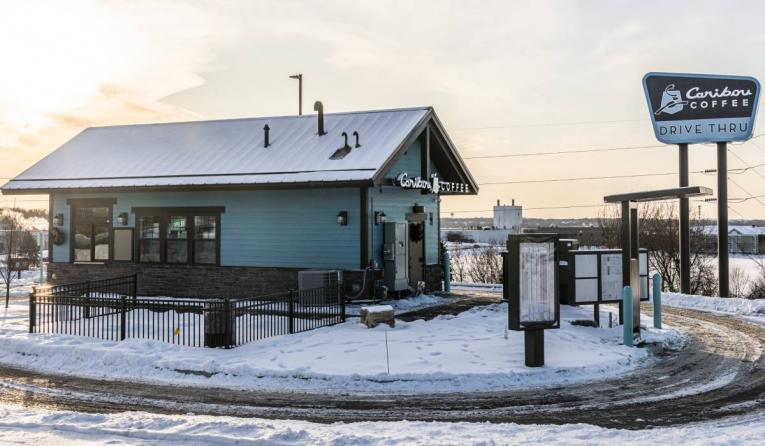 Caribou is also embarking on its first domestic franchise program, and the Cabin format is front and center to offering operators diverse options.

Back on the drive-thru aim, hiring laid the foundation for Caribou. The company looks for employees who care about interaction. “Just like when people were wearing masks, it’s been said that you can see people smile with their eyes,” he says. “You can hear people smile with your headsets. So I think finding people who generally care about the disposition, the day, the interaction with another human, is first and foremost.”

Operationally, Butcher adds, the Cabin format was designed by operators. The brand laid everything out inside of its operational space per their request. It picked about “15 or 20” of its high-level operators and showed them the equipment package. “What do you want? How can we set you up so you can spend more of your energy on people and not on process?” Butcher says.

Caribou’s decision to pare down its menu for the Cabin aligns with its broader theme as well. The setup offers fan-favorites but not the full assortment to limit complexity and ensure efficiency. “How can we allow and set our teams up for the most success so that the majority of their time can be spent interacting and talking with people as opposed to producing,” Butcher reiterates.

While less tangible, he notes, Caribou’s training emphasizes freedom in its hospitality approach. Employees are given explicit permission to focus on interactions. “Our goal is to be that spark in someone’s life,” he says. “And I think it gives [employees] a different reason to show up or work every morning and tie on their apron.”

These North Star playbooks refocused during a time of change for the brand. Caribou joined with Einstein Bros. and Panera Bread in August 2021 to form “Panera Brands,” a fast-casual platform that encompasses nearly 4,000 locations and 110,000 employees across 10 countries. Butcher notes the alignment pairs Caribou with “other premium successful companies and provides access to help us accelerate and amplify our growth in some key areas.”

Then, this past November, Caribou opened its first domestic franchise (a Cabin format) in Wooster, Ohio. The program launched in October 2021 and Caribou struck its inaugural multi-unit agreement with franchisee Mike Mariola, who intends to develop stores in the Columbus, Dayton, and Cincinnati markets.

Since its founding in 1992, Caribou has scaled to 749 locations, including 325 company-owned venues housed primarily across the Midwest. The rest are non-traditional (license) and international franchise operations.

Butcher says the process and its potential has only begun to unravel. But the company’s “biggest, single concern” was always tied to everything he’s spoken to thus far. Could Caribou’s core DNA translate through franchise ownership? “A lot of operators say that their team matters or that culture matters, but we look for evidence for that being true,” Butcher says.

He visited the Wooster store and met the GM, assistant GM, and team. “As soon as I watched them interact, I knew that the store was going to be a success,” Butcher says. “It’s all about the people. The people are the heartbeat of the brand. And that’s what we have to look for with our franchise partners; not just people who are great operators and great executors, but people who do it for the reasons we do.”

“I get asked a lot about store count goals and how many franchisees do we want to sign,” he adds. “For us, it’s way more critical that we find the right franchisees that are like-minded and care about the same things. Because we want to be proud of the growth that we drive. It’s really important for us that it’s done in the right way, consistent with what matters to Caribou.”

Caribou refreshed its loyalty program, which boasts more than 2 million active users, along an app launch, in mid-September. It gave customers more control over ordering and allowed them to save favorite customizable drinks and frequently visited stores (now, they can name the stores versus just seeing addresses on the screen. Say, “daycare Caribou,” etc.) Anybody can use the app to order, but Caribou gave Perks members the ability to share rewards with friends and check in to earn or use points on each visit, incentivizing sign-ups. The update also enabled customers to earn points online on the chain’s website and redeem points for discounts on online orders and free shipping. Responding to the omnichannel task for operators today, consumers can order ahead for in-store, drive-thru, or curbside pickup.

“They want us to demonstrate that we know who they are, make the interaction as efficient as possible. That’s what the app really allows us to do,” Butcher says. “… There’s a lot to look forward to as it pertains to our future. We’re really eager to build on to this moment we have as a brand. Continuing to roll out really cool, innovative products. The technology in our customer’s hands. And the end of the day, we just want to continue to offer a warm and friendly, real quality experience for our guests.”