Chipotle Eyes Growth in the Wake of COVID-19

From an expansion standpoint, the pandemic might carry a silver lining for some.

One of the steady debates of COVID-19 is whether or not it will usher in an era of quick-service growth, particularly on the large-scale, well-capitalized front. A flip, in some ways, from what happened out of the Great Recession, when single and multi-unit independents, as well as fast casuals, met the demand created by maturing millennials, tech innovation, convenience, and a growing pool of overleveraged chains.

Fast casual, to highlight, reported sales growth between 10–11 percent from 2010–2015, according to industry consultant Pentallect Inc. It then slowed to 8 percent before falling to 6–7 percent.

The argument for the opposite effect taking shape today—big chains getting bigger—stems from the closure side. Nearly two-thirds of independents are full-service restaurants (versus 15 percent for chains). Meanwhile, the standard drivers of quick-service expansion—demographics, convenience, behavior trends, improving quality—will not only remain in play in a post-pandemic landscape, but will be further augmented by a higher number of sit-down closures, dine-in constraints/changes, lingering health-and-safety concerns, and a slower recovery during periods of low or no economic growth.

If the projected mass closure event does occur anywhere near the ballpark (the National Restaurant Association believes 100,000 total will shutter this year), restaurants could see a destabilization of commercial real estate, if operators cannot pay rent, which could then incite a spillover effect into the larger economy, according to financial services company Rabobank.

And so, a delta is forming from a balance sheet perspective—independents, generally, have lower margins and access to less relief on rent and other fixed costs. Many entered the crisis with underdeveloped off-premises business and higher levels of financial stress. Brands are also finding the cost of operating under COVID-19 conditions (PPE, etc.) to outweigh the cost savings of more efficient models.

WHICH CHAINS WERE GROWING BEFORE COVID-19?

Going back, Rabobank said aggregator cash holdings by 25 of the largest public brands more than doubled, from $9.4 billion pre-virus to nearly $20 billion in mid-May. Each of these chains suddenly carried more cash than before coronavirus struck.

Was this cash build-up strictly a defensive strategy intended to improve liquidity and project balance-sheet strength? Or could it signal a more aggressive M&A stance, as foodservice sales recovery takes hold and economic recession brings acquisition multiples down to attractive levels?

Starbucks CFO Pat Grismer explained this past week the chain has not seen short-term rent abatement of late. Rather, it's heard more favorable terms for existing locations and, importantly, new locations. It’s received concessions like additional parking spots (to help with curbside pickup) and secured early termination rights in new leases. This latter point is important because it provides Starbucks flexibility to exit as the situation warrants. Also, the brand wrote into current and new leases provisions for rent relief in the event of new disruption comparable to what it’s experienced in the last several months (a scary thing to imagine). That wasn’t in Starbucks’ leases before.

While the brand plots 400 or so accelerated closures, it’s also nurtured a pipeline focused on drive-thru assets, largely in the suburbs, “and we’re able to bring to bear the current environment to secure favorable rent terms or lease terms for those new locations,” Grismer said. 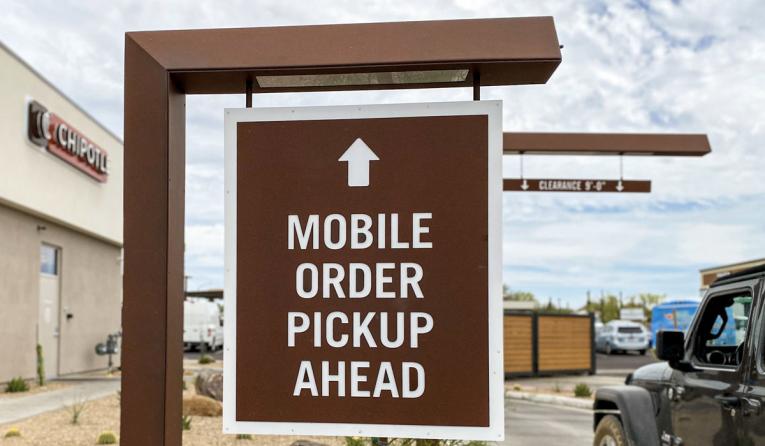 Chipotlanes continue to pave the runway for Chipotle's expansion.

This growth topic surfaced Thursday during Chipotle’s presentation at the Raymond James North American Equities Conference. The brand has nearly $1 billion of cash on its balance sheet.

So early on, even when sales slid 30–35 percent, Chipotle had capacity to get on the front foot of a post-COVID gameplan. “We had enough of a balance sheet that we knew that we can continue to grow while others were pausing,” CFO Jack Hartung said.

He added building Chipotle’s pipeline is actually going better than it would have absent coronavirus. “And you hate to say that COVID—that there’s a silver lining to it, but there are things that you can take advantage of while you’re navigating through this change,” Hartung said.

With that, expect upward movement in Chipotle growth, although Hartung said it was too early to toss a number at the board. Historically, Chipotle’s yearly high watermark was in the mid-200s (80 in Q4 2019 was the most in brand history, by quarter).

Hartung said Thursday he envisions Chipotle, in a “couple-of-year period,” getting back to that mid-200s pace. That would be nearly 100 more projected openings per calendar than Chipotle planned for 2021 before the crisis hit.

Hartung said Chipotle’s growth challenge will boil down to staffing as much as real estate. Typically, the chain promotes about 80 percent of managers from within. So building a crew and hourly manager pipeline is as essential as picking sites. Whether or not a wider labor pool brought on by COVID aids that is hard to say. Unemployment numbers are up, but so is discretion. A lot of recruitment now concerns unemployment benefits and the future of possible relief packages. And just how the virus narrative and case counts progress. In many cases, potential employees need to be convinced to come back or reenter the workforce. Restaurants that invest in safe workplaces and communicate those protocols will have a leg up.

“You'll definitely see more openings going forward in the future,” Hartung said. “Too early to put a number on it, but landlords are excited to have Chipotle. They're excited to honor our request to put a Chipotlane more than they were, call it, a year ago. And so, we feel really good about all the aspects of our development pipeline.”

Chipotle grew its footprint from day one by sticking mostly to suburban spots or urban sites “on the edges,” meaning neighborhoods of cities. Hartung said Chipotle will take a cautious approach to New York City (and like markets) understanding major metros might need years to get back.

Also, focusing on suburban targets taps into the Chipotlane opportunity. Units with the order-ahead pickup lane are running 30 percent better on sales versus other stores during COVID. If you look at the 100-plus restaurants with a Chipotlane and narrow to those open for a longer period, pre-COVID, they’re still pushing 10–15 percent higher volumes, Hartung said. That’s a $200,000 to $300,000 hike. They start out hotter.

Margins are also higher in Chipotlanes because the digital business is greater. An average Chipotle (these days) is sitting around 50 percent digital. Chipotlanes are 60 percent. And, critically, roughly two-thirds of that 60 percent is order ahead and pickup—Chipotle’s highest-margin transaction.

The design of the store pushes guests toward the off-premises occasion Chipotle prefers, over delivery.

“It's a no-brainer, and that's why we're leaning in to Chipotlane,” Hartung said. ‘That's why you've heard us say this year, we expect more than 60 percent of our restaurant openings will be Chipotlanes. Next year, we think it's going to be more than 70 percent. And I think going forward, I think if anything, the natural tendency will be that number will go up, not down.” 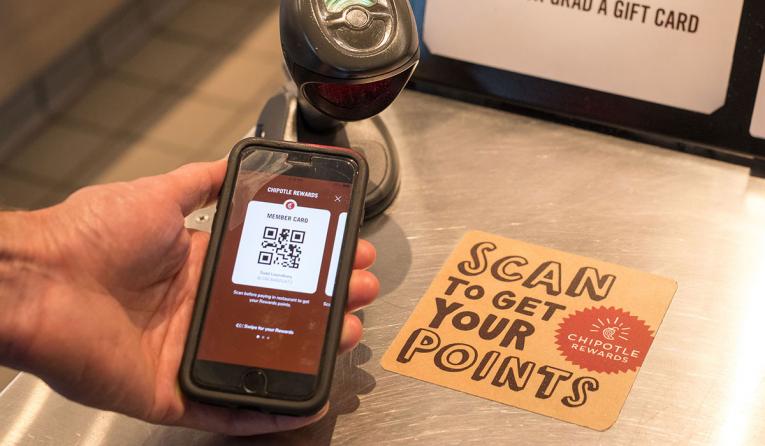 Chipotle's rewards program is already up to 16 million members.

Chipotle’s digital business has stuck in the 70–80 percent range in markets as dine-in returns. A big culprit, CEO Brian Niccol said Thursday, is Chipotle’s surging rewards. The chain touted about 8 million members at the end of 2019. Accelerate nine months and it’s now 16 million, on its way to 20 million, Niccol said.

“I think that's an indicator of people not just visiting Chipotle one time but saying, ‘You know what, I want to be a part of the brand ongoing,’” he said. “And as we've looked at the composition of those rewards customers, a lot of them are new users. And they've made the commitment to say, ‘I want to be in a rewards program,’ which tells you they're planning on making more than one purchase.”

In addition to new users, Chipotle’s analytics show a strong impact on “medium users.” Dinner occasions are up, too. The brand has run ads to boast customization in the app.

Niccol said it’s still early days with what it calls “journeys” in terms of leveraging the data it’s gleaning.

“We're setting all these different cohorts on journeys, and we're testing different journeys,” he said. “And some of the journeys are, look, you've never tried delivery or you've never tried a beverage or we've noticed that you only seem to come in on Wednesday for lunch. And so we take these cohorts, and then we put them on journeys where we see you've never added queso or—there's all sorts of elements within our business—or it's like we noticed that you're only doing Lifestyle Bowls. I mean there's all kinds of really interesting things going on here.”

COVID conditions helped Chipotle reinforce trust with guests as well. "I feel like the brand is just stronger on its key points of differentiation, which I think is also a really good tailwind for this company longer term," Niccol said. "And then you marry that with the granular understanding that we now have on our customers because of the data we're getting, it becomes really exciting, really exciting."

Niccol touched briefly on Chipotle’s quesadilla tests. It’s currently a digital-exclusive menu feature even though customers can still ask for it in-store. He said restaurants make 10–20 per day on average despite it’s being on the board or not.

But in the restaurants where there aren’t tests, the product just isn’t that great, Niccol said. And it takes two and half to three minutes to make.

The pilot units have a TurboChef oven, however, which cooks the quesadilla in 30 seconds (45 if there’s two in there). And it comes out the way you’d expect a quesadilla to. For employees, then can prepare, put in the oven, take it off the frontline, and keep moving. It unclogs that previous experience.

“We're going to try like tech to get everybody to only order them digitally, but I know there's going to be some customers that will still walk in and ask for it,” Niccol said. “And the good news is we've got a compensating process for those few that occur, and it's much faster than the current process.”

He added Chipotle is working on creating a supply chain to support Carne Asada permanently. “Customers love it. Our team members love it. So we'll bring it back when it makes sense,” Niccol said.