The fast casual's same-store sales slowed down around Memorial Day, and have yet to recover.

The 170-unit fast casual reduced its restaurant support center roster by 5 percent, or about 20 people, and moved its Los Angeles office to a smaller, adjacent facility. Sweetgreen expects to incur charges of $500,000 to $800,000 in severance packages and $8.4 million to $9.9 million for the office move. Both maneuvers should generate about $4 million in annual cost savings. The company doesn't anticipate any more cuts for the remainder of 2022.

The decisions were an effort to “lower our operating expenses and protect our path to profitability,” CFO Mitch Reback said. For perspective, Sweetgreen swung an adjusted EBITDA of negative $7.4 million in the second quarter, compared to negative $13.8 million last year. Reback estimated Sweetgreen will break even on adjusted EBITDA in 2023 and reach positive territory sometime in early 2024.

Sweetgreen’s second quarter started off well, with same-store sales growth of 21 percent in April and May, but the trajectory decelerated around Memorial Day and hasn’t returned. Comps lifted just 7 percent in June and July. The company attributed the slowdown to increases in summer travel, waves of COVID cases, a sluggish return to office spaces, erratic urban recovery, and slow ramp up of the 2021 class. For the full quarter, same-store sales grew 16 percent and AUV was $2.6 million.

When Sweetgreen entered the stock market in November 2021, it reached $56 per share. As of Wednesday morning, the price slid to $15.72.

“In Sweetgreen’s 15-year history of sales patterns, we’ve never seen this before. Our historical seasonality always showed growth during this period,” Reback said during the chain’s Q2 earnings call.

In response, the brand adjusted its 2022 revenue guidance to $480 million to $500 million, down from $515 million to $535 million. The low end of the projection assumes same-store sales remain slow at 5 percent and Sweetgreen’s 2021 class stays flat, while the upper end assumes comps growth of 15 percent, but still flat sales for the 2021 fleet. There are glimpses of optimism, however. Same-store sales are trending positively in August at 7 percent, and college-related traffic it set to come back this fall.

The chain is hoping to remember this stretch as simply a summer lull and that brighter days are ahead. But Reback said the brand has been previously “scarred" by projecting a better environment.

“We hope this is a conservative estimate, but if you look back over the past two years, we think that we’ve just been wrong on so many of these calls,” he said.

CEO John Neman said the brand has a number of efficiency levers to pull in the face of slower sales. Some of the biggest strategies come in the back of house.

Currently, deciding what cold ingredients to prep is done manually in restaurants several times each day. To resolve this, Sweetgreen is testing a proprietary cold ingredients prep tool that auto-generates a list of what to prepare, and how much, based on multiple data points and a predictive algorithm. Neman said the tool removes guesswork, thereby eliminating food waste and ensuring fresh ingredients at all times. It’s being piloted in six restaurants and will be spread across the system by the end of 2022. Sweetgreen already has a hot ingredients tool that guides employees in a similar fashion.

Sweetgreen is also piloting a redesigned frontline at its Long Island City location and an enhanced digital makeline in Brooklyn. The frontline features more space for mixing and the POS system, which have historically been two of Sweetgreen’s biggest in-store bottlenecks, Neman said. The change doubled frontline throughput. In Williamsburg, the improved digital makeline increased throughput by 30 percent.

The frontline and makeline upgrades will be part of new stores starting in August.

“We believe consistent improvement in kitchen operation will be a force multiplier and should improve store efficiency, labor productivity, and the team member experience, and thus restaurant-level margins over time,” Neman said. 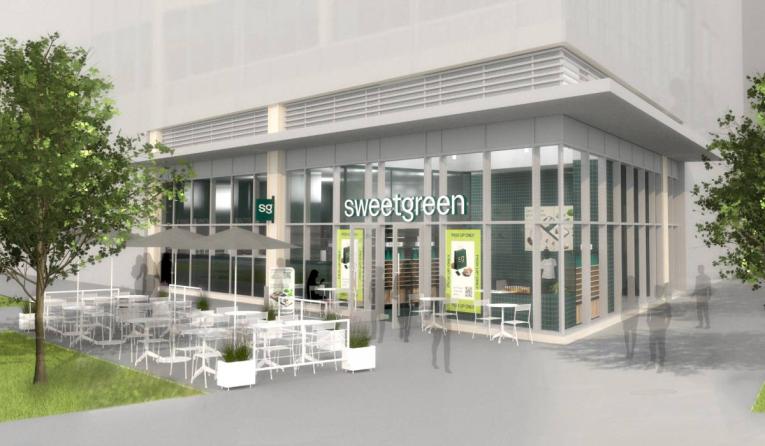 Other efficiency initiatives are more consumer-facing, like Sweetgreen’s planned loyalty launch in early 2023. Ahead of the rollout, the company has examined customers’ response to personalization. At the start of 2022, the fast casual tested sweetpass, a $10 subscription allowing customers to earn a $3 credit on purchases for 30 days. More recently, the brand piloted a rewards and challenges program encouraging customers to opt-in to receive an offer, i.e. add a side to get a free drink, spend $20 to receive a $4 credit on the next purchase.

Then with the menu, Sweetgreen plans to lean toward dessert, wider drink selections, and heartier foods.

“We believe that our planned loyalty program, combined with our healthy and habitual menu, will provide a unique opportunity for incrementality, increased profitability, and the opportunity for us to become a part of the daily ritual of an even larger number of customers,” Neman said.

Though sales are pressured, Sweetgreen’s unit development remains on track. The brand opened its 20th store of the year in Birmingham, Michigan, on Tuesday. In September, the company will open its first digital-only store in Washington, D.C., and later in 2022, it will debut a restaurant with a drive-thru mobile order window in Schaumburg, Illinois. In the second quarter, overall digital revenue mixed 62 percent. Digital orders originating on Sweetgreen’s own channels mixed 40 percent.

In the past few years, Sweetgreen has notably transitioned its system to more suburban markets. At the end of 2019, the fast casual was 65 percent urban, and those units earned AUV of $3.1 million, compared to $2.7 million for suburban stores. Now, the footprint is 50/50, AUV figures have completely flipped, and suburban restaurant-level margins now exceed urban outlets. Sweetgreen has great confidence in this form of growth, as 85 percent of its pipeline is suburban.

The chain is keeping its full-year guidance of at least 35 net new restaurants, and also stands firm on doubling its footprint in the next three to five years and reaching 1,000 stores by the end of the decade.

“I think we foresaw some of the supply chain challenges around equipment, and we were able to do some mass buying last year to get ahead of a lot of this,” Neman said. “And the confidence really comes from the fact that leases are signed and the deals are in construction. We have very high confidence in at least 35 this year and we have a very healthy and robust pipeline next year with some great sites, great deals, and many leases already signed.”

Food, beverage and packaging costs were 27 percent, consistent with 2021. More inflationary pressure is building around cost of goods, especially with chicken and avocados. For the full year, Sweetgreen expects costs to be in line or slightly better than last year, which was 28 percent. As for labor, costs were 30 percent, an improvement of 100 basis points year-over-year. For all of 2022, these expenses are also expected to be flat or a little better than last year at 32 percent.

Sweetgreen anticipates only one more price move before the year is over—bumping its premium chicken add-on to $3.25, up from $3.