In May, Chick-fil-A first hinted at plans to launch a delivery-kitchen concept called, “Little Blue Menu,” which takes its branding from the blue menus of Hapeville Dwarf House, the original Chick-fil-A store S. Truett Cathy opened in 1946.

Chick-fil-A lifted the lid on some details Tuesday. Set to debut fall in Nashville, Tennessee, Chick-fil-A is labeling Little Blue Menu, which now has a website in progress, an affiliate of the brand. A second, in Atlanta, is on deck for 2022.

At Hapeville Dwarf House, Cathy was known for continuously changing the menu. It’s where he invented the Chick-fil-A Chicken Sandwich and also served items like hamburgers, collard greens, and lemon pie.

Chick-fil-A’s delivery-kitchen brand will feature "hundreds of menu options," the company said, everything from a thick-cut pork belly BLT to garden-fresh salad to the chain’s Waffle Potato Fries.

Little Blue Menu will showcase three new virtual restaurants, as well as Chick-fil-A’s typical fare. They are: Flock & Farm, Garden Day, and Outfox Wings. Chick-fil-A trademarked all three. “Whether it’s with homemade marinades or a delectable, oven-roasted chicken with unbelievable taste, flavor is the central theme across the virtual restaurants,” the company said.

“The flavor profiles are fantastic,” added L.J. Yankosky, senior director of the beyond the restaurant team at Chick-fil-A, in a statement. “The culinary team that developed the virtual restaurants is world-class, and the ingenuity they harnessed for each menu does not disappoint.”

“There are so many great menu options to choose from, but I’m particularly excited about the delicious oven-roasted chicken from Flock & Farm,” Yankosky said. “The restaurant features marinades made fresh in-house, which were perfected by Stuart and his team.”

Chick-fil-A said each virtual concept, and respective menus, will be open to change based on guest feedback. The first Little Blue Menus will operate as prototypes before launching at a greater scale, the company said. Chick-fil-A is sending consumers who order a link via text to participate in a satisfaction study.

“After the Nashville pilot opens and customers share their honest opinions about the virtual restaurants, we will have the opportunity to tweak or add new menu items,” Kanika Patrick, who is leading marketing for Little Blue Menu, said in a statement. 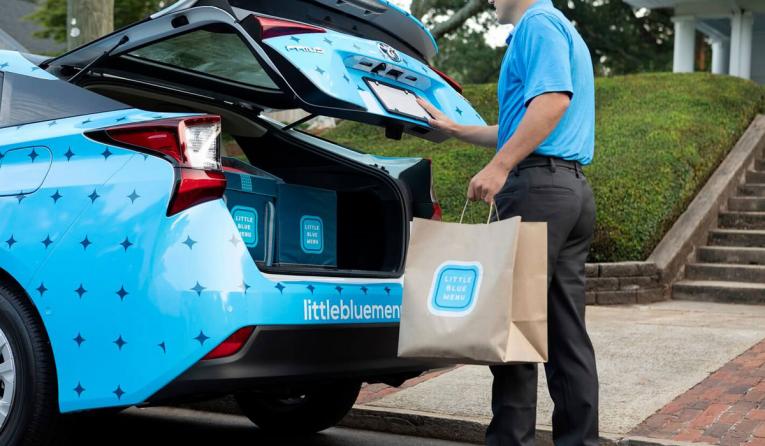 “We are committed to bringing a level of service, professionalism, and hospitality to the delivery process,” John Moore, one of the three Chick-fil-A franchisees who will oversee the delivery kitchen, said in a statement. “Our guests can expect the level of trustworthy service they’re accustomed to with Chick-fil-A.”

Little Blue Menu is housed in the same site where Chick-fil-A launched its first delivery-focused restaurant three years ago.

“Little Blue Menu will provide customers with the opportunity to change up their meal routine, but with a brand they know and love. It’s the perfect way to serve loyal Chick-fil-A customers—adjusting to meet their ever-evolving palates—and serve new ones, offering a variety of high-quality menu options and delivering greater convenience for all,” the company said.