As Matthew Walls, chief global development officer of Carl’s Jr. and Hardee’s says, “it wasn’t just drive-thru” that got CKE’s brands through COVID-19 lockdowns. In truth, the channel’s surge over the past 19 months only underlined Walls’ comment in darker ink. With cars lining up at faster clips than ever, chains can only do so much to usher traffic along. Mostly, as this year’s QSR magazine Drive-Thru Study showed, guests understood and were willing to wait, with respondents saying they were OK sitting a maximum of 13 minutes (Gen Z and millennials were at 17 minutes). Last year, it was 12 minutes.

While speed was once the top—and seemingly lone—draw of the drive-thru, personal safety joined in, which is why the reins loosened with guests. That plus smart phones and the reality drive-thrus everywhere were crowded. Yet Walls believes the future of Carl’s Jr. and Hardee’s isn’t tied solely to improving drive-thru, with investments such as menu confirmation boards and potential AI coming down the pipe.

Rather, it’s “this omnichannel experience,” Wall says, that’s going to transform how the industry delivers service to guests on the other side.

The ability to order ahead and pull into a lane and pickup. Or just park at a designated spot and tap curbside. There are multiple ordering outlets completing the circle for quick service as guests’ expectations continue to shift.

Location company Bluedot has shared “State of What Feeds Us” reports throughout the pandemic. Its fifth version explored inflation, loyalty, the arrival experience, and how mobile technology plays an integral role in each of those topics.

The umbrella theme—to Wall’s directive—centered on the notion that the restaurant ecosystem created by COVID is more omnichannel and diverse than ever. Brands can no longer focus on a single set of ordering options and leave business on the table. It’s become a race to offer a mix of options that meet customers’ needs where they are, and do so in a way that reflects whatever the brand was known for before it shut its cafes. For instance, how Chick-fil-A turned drive-thru into a multi-stop process that allows it to work upstream and infuse hospitality at different touchpoints, from order takers roaming lines to payment to pull out. It’s not all that different from how servers conduct “table checks” when guests wait for food so the experience doesn’t feel as long as if they ordered and never heard from anybody until the food showed up. In essence, Chick-fil-A brought its differentiators outside the restaurant.

According to Bluedot’s, guests are still using the drive-thru. Preference has held in recent months despite a broad return of dine-in. Nine out of 10 respondents said they visited a drive-thru in the last month.

Visited drive-thru the same amount or more often than before in the last month:

Consumers that have used curbside pickup in the last month:

One of the key findings of Bluedot’s pull was that not only do customers prefer the drive-thru today, but they are most widely used for mobile order pickups as well.

Restaurant app downloads have remained strong, too, and customers want the ability to connect platforms with drive-thru or pickup to further strip friction out of the ordering process.

Consumers who have downloaded at least one new app in the last three months:

Why are consumers deleting restaurant apps?

And why are users downloading restaurant apps in the first place?

Diving deeper, 19 percent of respondents said they downloaded an app to access “special menu items” (chasing an LTO or marketed launch), and 25 percent said they continue to use an app so they can access unique menu items. An example of this: Chipotle’s quesadilla is a digital-exclusive feature, as are its curated “Lifestyle Bowls.” The company also recently added a nutrition preferences filter where users can sort by things like vegan and Whole30. Taco Bell has long done this with vegetarian options.

Social media is driving a lot of the traction. Fifty-two percent noted social media impacts their app downloads and usage; 27 percent leverage social media to find deals and coupons; 15 percent use it to access secret menu items; and 11 percent said they turn to social for influencer menu picks.

Also worth highlighting: 52 percent said they would be more likely to interact with a restaurant if it offered a game, sweepstakes, etc.

Here’s a breakdown of what users want from restaurant apps:

In the quick-service realm at least, there appears to be shifting preference toward self-service digital ordering.

How consumers prefer to place their order:

Again, this is a movement taking shape outside restaurants as well, with consumers asking for order-ahead options before they arrive at the drive-thru or curbside spots.

One in two respondents ranked points and/or dollars off as the most important element in a restaurant’s loyalty program, followed by coupons.

One of the alluring things about loyalty platforms, especially given the contactless dynamic restaurants find themselves in, is that consumers associate them with better customer experience. It’s a way to deliver hospitality with systems over some of the traditional hallmarks, like face-to-face service, which have become more challenging for a variety of reasons. Labor is harder to come by, for one, but also many guests aren’t looking for that kind of intimate engagement. But yet, they still expect an experience that’s as convenient and personal as the ecommerce they get from Amazon.

Saveneet Singh, the CEO of PAR Technology Corp, frames this as restaurants nurturing a digital footprint as seriously as a physical one. “While there is no doubt there will be a large shift back to in room dining, it’s my belief that the ‘cat’s out of the bag’ and consumers of restaurant food will continue to demand the experience we received during the pandemic,” he said. “We believe it’s akin to the long term shift we saw from retail to online. Once commerce hit mainstream adoption, it never stopped.”

“Nothing will replace the meals and moments we share together, yet today, consumers are demanding that their restaurants provide them the same access and convenience that they receive from Amazon,” Singh added. “They expect online ordering, mobile, loyalty, seamless payment, fast delivery and everything else that we associate with the modern world.”

Dressed down, while digital sales might still be the minority of transactions for some, they require the same focus, and perhaps capital, to be relevant for today’s consumers.

Loyalty programs are a great place to begin.

Forty-five percent of respondents said they receive personalized deals and coupons from programs they currently belong to; 28 percent stated being a loyalty member leads to their orders being available upon arrival; 26 percent noted they receive better pricing; and 26 percent reported being thanked for their loyalty by the brand.

A full 90 percent of people added they’d download and use a restaurant app more often if it meant access to better prices.

As you can see below in this Bluedot graph, app orders have actually passed drive-thru as the channel where guests are most likely to up spending. 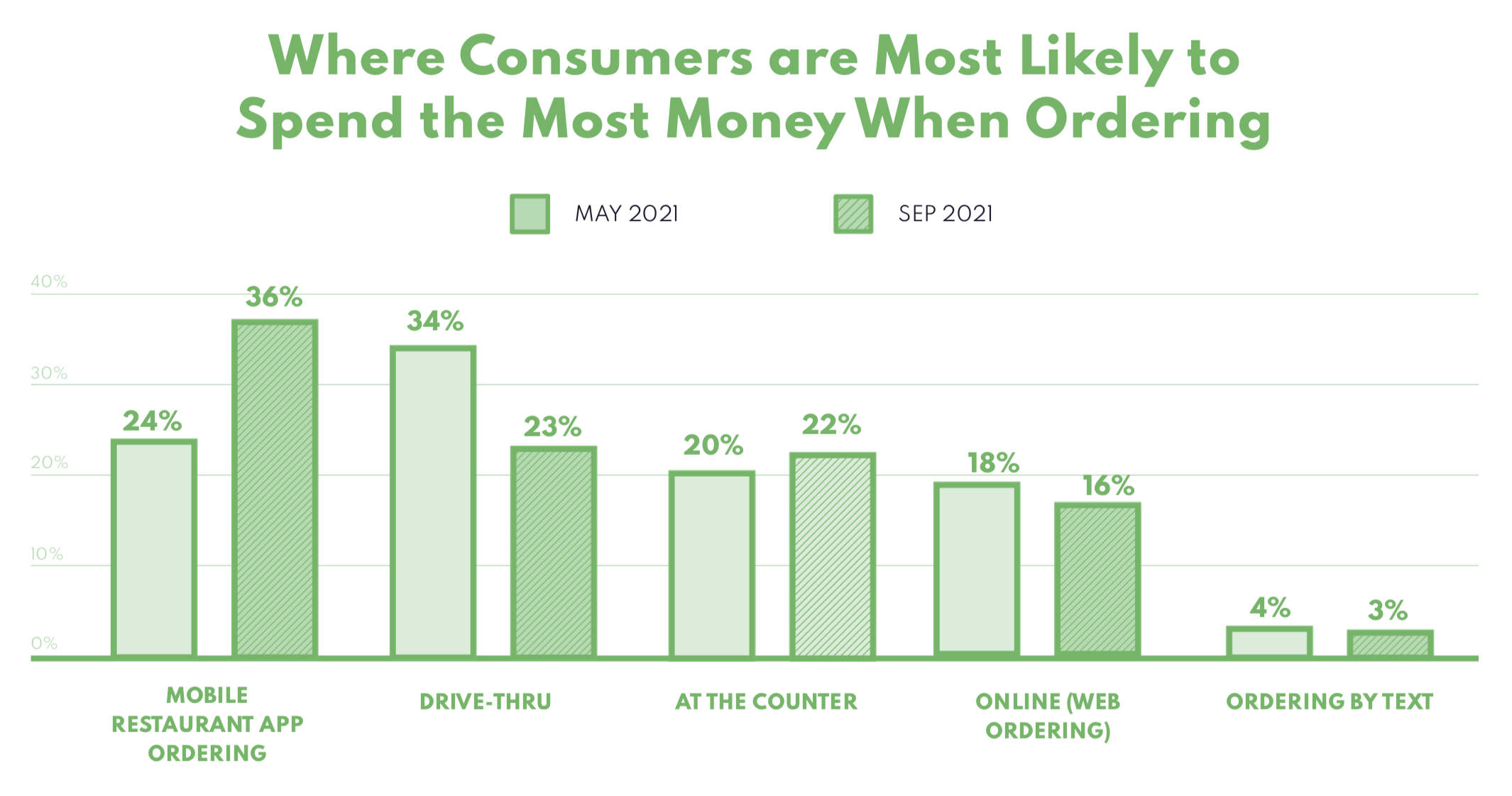 We all know prices have climbed of late. In the full-service sector they lifted 4.9 percent in August compared to last year and 6.9 percent in quick service, according to BLS data. The general conviction, thus far, is that consumers are willing to foot the bill.

According to Rewards Network, total spending at quick- and full-service restaurants is up 7 percent, on average, compared to 2019.

In Bluedot’s study, 63 percent of customers reported being impacted by recent price increases.

But how elastic this remains is a guessing game. Will value seekers get priced out? What if we face an economic downturn. It’s a concern shared by Darden CEO Gene Lee, who said casual dining was built, in many ways, on the value-centric backs of a very loyal demographic.

Naturally, the same is true of fast food. It’s makes Bluedot’s next chart a development worth following in coming months. 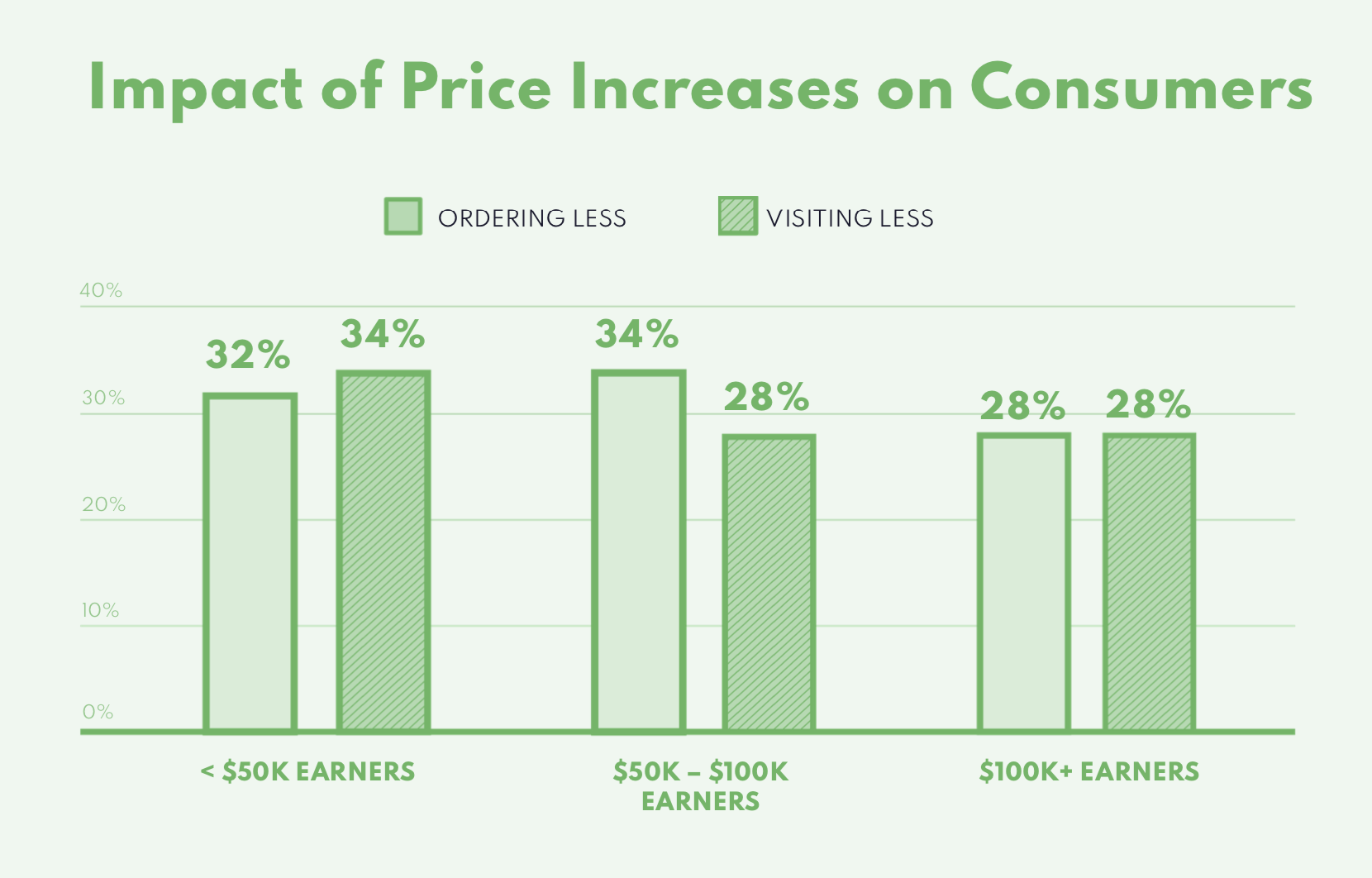 Back to the start

As noted earlier, when Bluedot asked about customer preference for order pickup by channel, drive-thru flashed at 39 percent. In-store was next at 31 percent and curbside followed at 30 percent. This, too, varies by consumer base.

While there’s clearly demand for pickup, there’s also a lot of ground to cover. One out of two respondents noted suffering from a poor pickup experience.

On the flip side, 47 percent of respondents said their order was ready upon arrival in-store.

For the most part, restaurants are getting better.

No check-in, order was automatically brought to my car

Tapped button on app to check-in and waited

Called or texted upon arrival and waited

Walked up to the mobile pickup area

Manually alerted staff that I arrived

And mobile order pickup at drive-thru, although a strong preference, has visible pain points:

With drive-thru and mobile pickups, nearly half of respondents said their orders were not ready when they showed up. And when an order was communicated as ready, 44 percent said they still had to wait.

Some other frustrations: 36 percent said food was cold and an inaccurate order was fulfilled; 22 percent lamented no mobile order pickup line to pull into.

“Rapidly adapting to pandemic and economic fluxes is a massive challenge for restaurants and the labor shortage compounds the problem. The only sustainable way to address the pain points is to rebalance digital and staffing resources by utilizing mobile strategies to alleviate stress in customer facing interactions while complementing those processes that are labor intensive,” said Judy Chan, Bluedot’s CMO. “The report continues to signal rising consumer demand for better functionality, ease and convenience. This is an opportunity for brands to eliminate friction across the customer journey, from the moment an order is placed through to the moment a customer picks up their order. For restaurant brands, the digital pivot is imperative to getting the customer experience right.”