Papa John's is back into positive sales territory.

After reporting its first positive sales quarter in two years, Papa John’s announced Wednesday that it is shaking up its leadership team as it continues to reinvent itself in the wake of founder John Schnatter’s departure.

CEO Rob Lynch, who has been on the job since August, revealed a streamlined senior management structure with “more clearly defined responsibilities and priorities.” He said in a statement that the new structure will “empower our senior leaders to make quicker, better decisions, collaborate more effectively, and focus investment and effort on the key drivers of Papa John’s future growth and success.”

“I’m very excited to welcome Max Wetzel to the Papa John’s team,” Lynch said, noting Wetzel’s reputation as a strategic and growth-oriented consumer marketer. “As our new chief commercial and marketing officer, he will lead the company’s efforts to reestablish the superiority of our pizza with consumers across our various customer platforms.”

Meanwhile, the shake-up also includes the departure of three Papa John’s executives: chief operating and growth officer Mike Nettles, chief marketing officer Karlin Linhardt, and chief financial officer Joe Smith. Smith, who has been with the company for nearly 20 years, will stay onboard until 2020.

Lynch said in a statement that the new leadership structure will be “the foundation on which we build our future.”

The management restructure comes as Papa John’s announced a 1 percent comparable sales increase in North America in the third quarter, breaking an eight-quarter slump. International comparable sales were up 1.6 percent for the quarter.

Papa John’s is still clawing its way back from a nasty split with Schnatter, who exited in 2018 after using a racial slur in a phone call with a marketing agency. The founder and long-time face of the brand fought for company control in the wake of his departure—launching the website savepapajohns.com, issuing a letter to franchisees that accused remaining leaders of “serious misconduct,” and attempting to block a “poison pill” enacted by the board of directors that was seen as an attempt to prevent Schnatter from acquiring a larger stake in the company—but in March departed the board, with an agreement that he could have a say in his replacement.

Schnatter has steadily sold off his stake in the company he founded in 1984. He now owns about 9 percent of the company, down from around 30 percent. 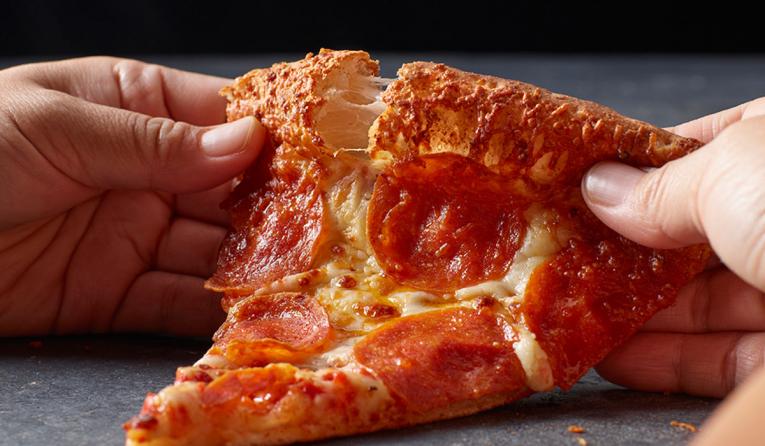 Papa John’s has made several moves this year to position it for a Schnatter-less future. Lynch, who replaced Steve Ritchie as CEO, was not the only new face brought in to add some momentum to Papa John’s turnaround. Basketball legend Shaquille O’Neal joined the company in the spring as a member of the board of directors, an investor in nine Atlanta locations, and, most importantly, as brand spokesman. Papa John’s has since rolled out a marketing blitz with O’Neal at the center, including the “Better Day” campaign in September that showed him interacting with employees and customers.

“We have seen since launching that campaign a positive movement across almost all of our consumer sentiment metrics that we track,” Lynch said in a call reporting the company’s earnings. “That's a long-term investment that we've made in the health of the brand, and that's an investment we're going to continue to make, alongside continuing to advertise and promote the innovation and the products that we're working on currently.”

On the call, Lynch outlined five strategic priorities for Papa John’s moving forward: a culture of leaders “who believe in inclusivity, diversity, and winning”; improved unit-level profitability across the system; superiority in the space via commercial platforms; better leveraging its technology infrastructure; and expanding its footprint domestically and internationally.

The management shakeup seems to be one part of the investment in a better leadership culture. But Lynch said on the call that it also includes investing in leadership at the store level.

“We must create a culture inside of each and every restaurant that inspires our team members to deliver the best service in the industry,” he said. “This comes from a dedication to development and training, and a commitment to not only making the best pizza, but creating the best environment for our workforce. One example of this is over the last year, we have created a tuition reimbursement program that's helping our team members receive the education that they need to fulfill their dreams.”

He added that an improved culture will help Papa John’s attract and retain talent, as well as drive innovation.

The company is also working at the store level to reduce costs and operational complexity, Lynch said, which should help store profitability. Another thing that should help profitability is Papa John’s approach to the delivery driver shortage: Unlike some of its biggest competitors, Papa John’s is partnering with third-party delivery services. It recently inked a deal to serve pizza through Uber Eats, and also has partnerships in place with Postmates and DoorDash.

These partnerships give Papa John’s a boost on the technology front, Lynch said, but also help assert the brand’s leadership in the pizza category. He added that positioning Papa John’s as a superior pizza option “requires a new holistic thinking about our products, menus, marketing apps, and digital channels.”

“In my first few weeks on the job, I've challenged our team to move beyond long-held assumptions and constraints, and deliver significant product innovation and communicate it through a marketing campaign to match,” Lynch said.

That product innovation includes the recent introduction of a garlic parmesan crust, which Lynch noted was the first time in the history of the company that it had innovated with its pizza dough.

While Lynch has only been on the job two months, he’s confident the moves the company has made—both on the consumer-facing side of things and in the corporate office—are setting Papa John’s up for better things to come.

“We are building an organization that is focused on innovation and ideas, an organization focused on building our best future,” he said. “We have taken a significant step to realign Papa John's organization with our new roadmap by strengthening and streamlining the senior leadership team. Clearly defined responsibilities and priorities will empower our senior leaders to make better decisions more quickly, collaborate more effectively, and focus on the key drivers of Papa John's.”